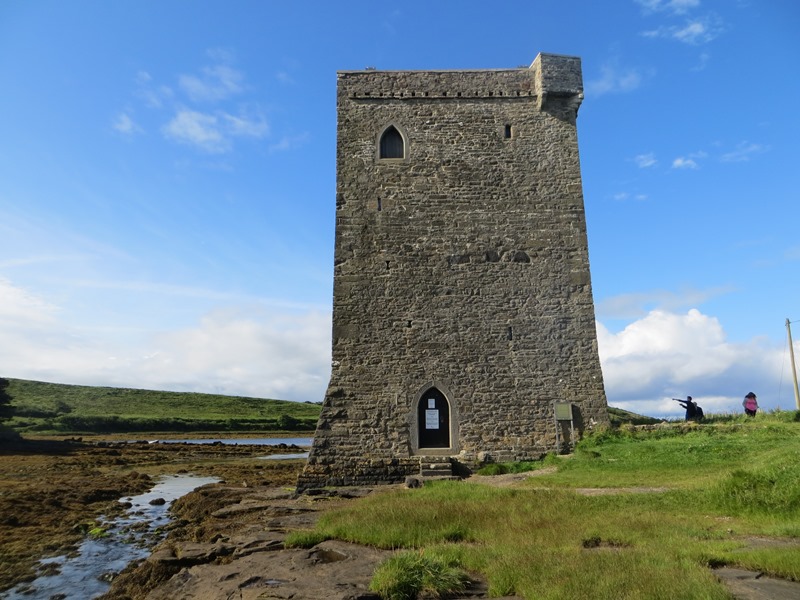 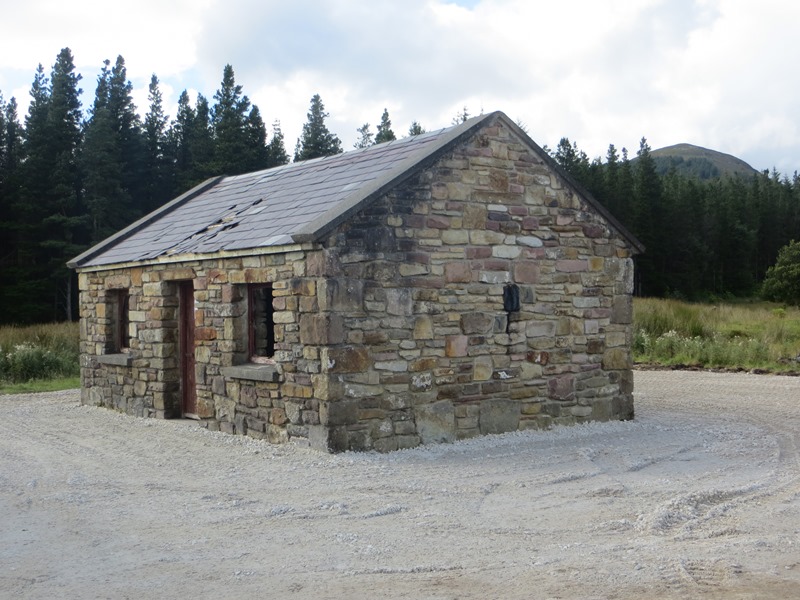 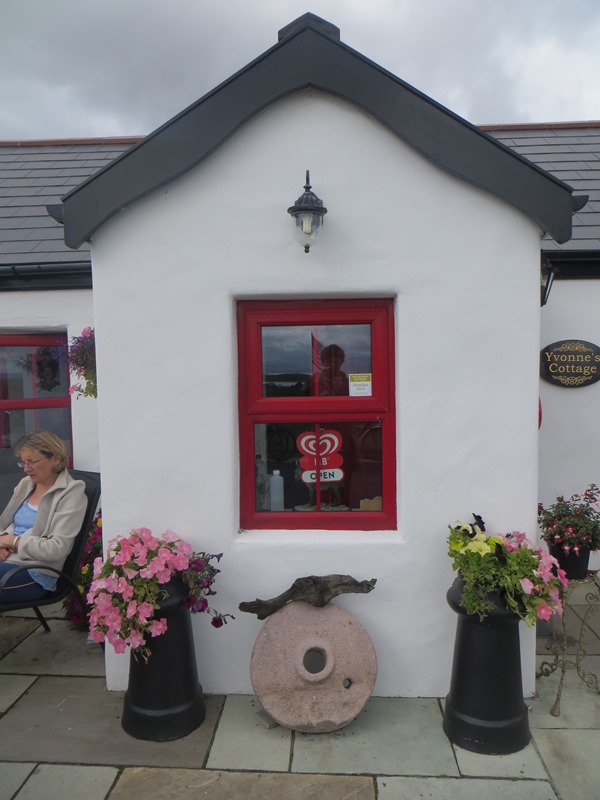 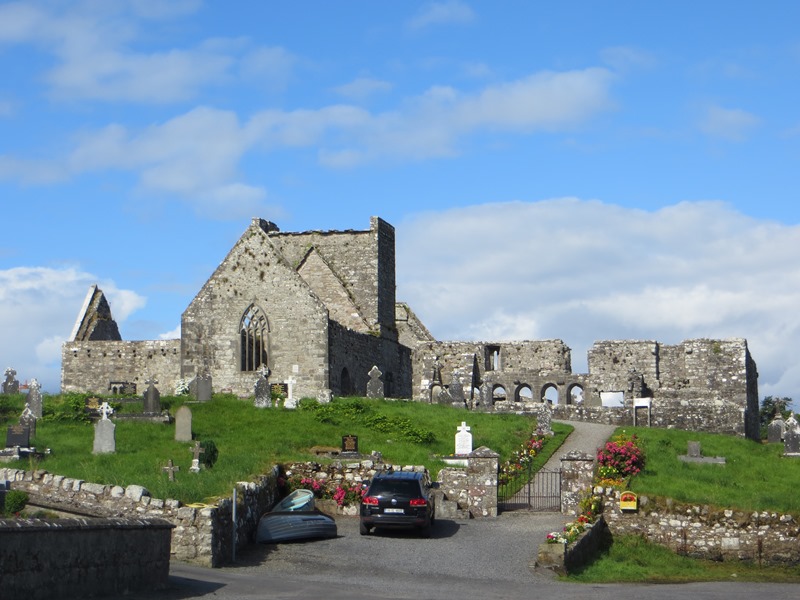 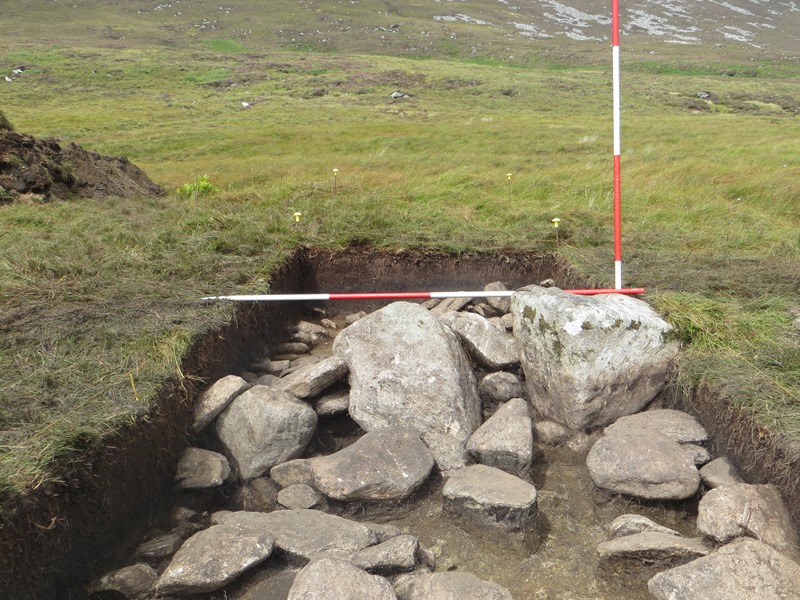 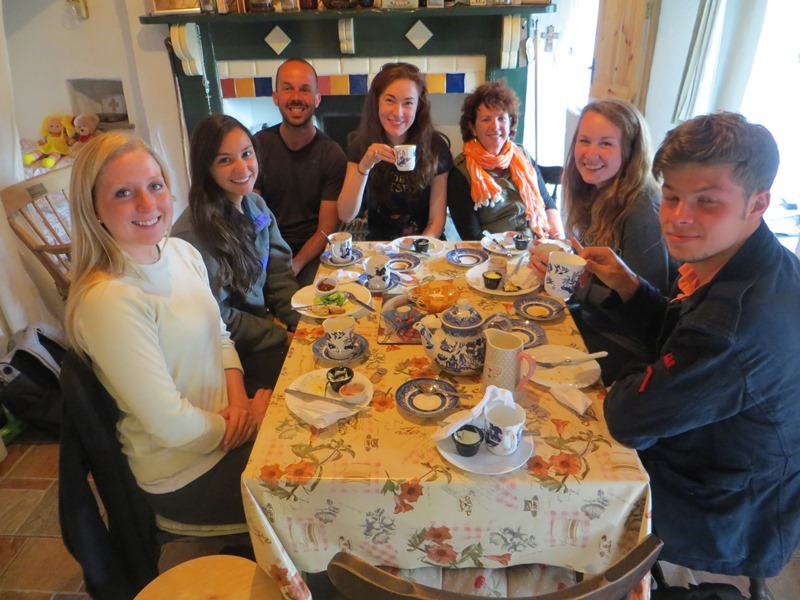 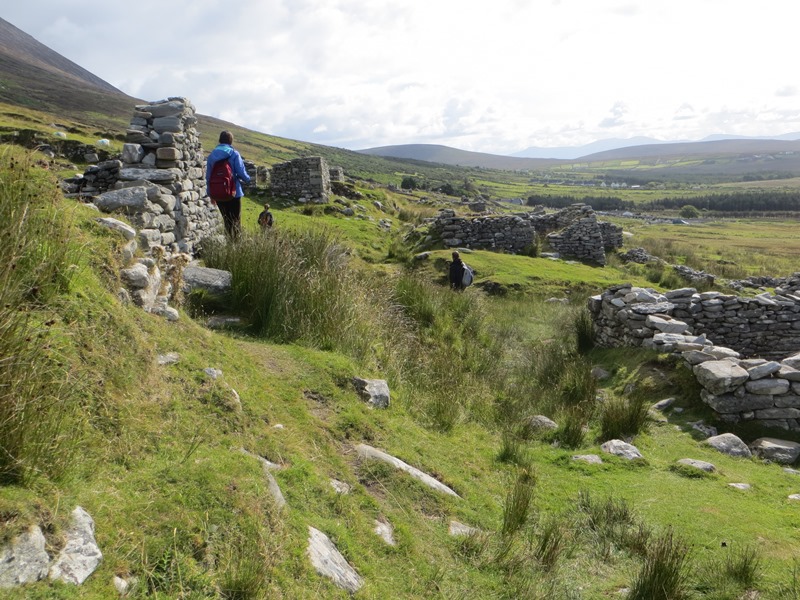 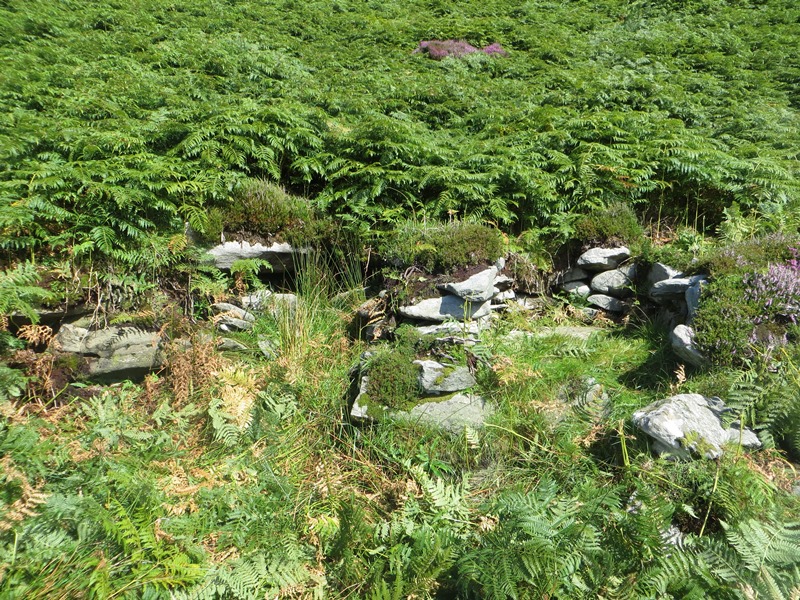 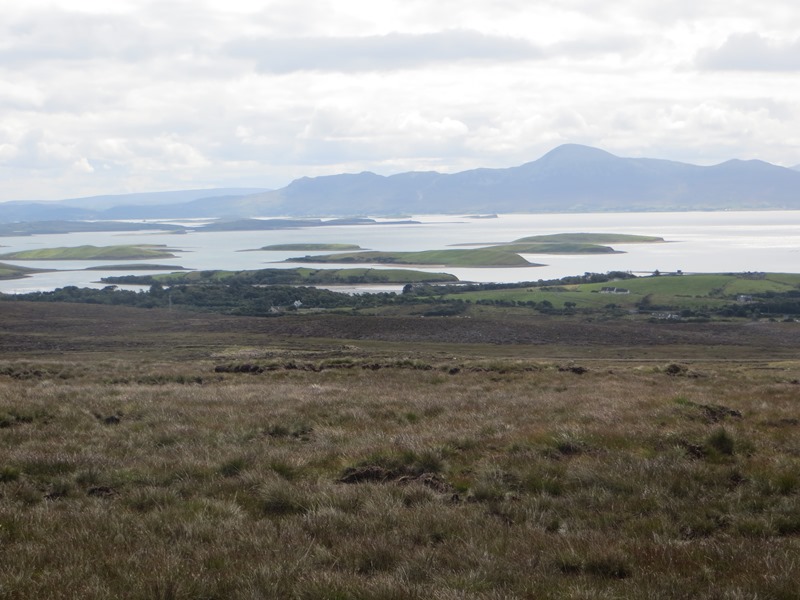 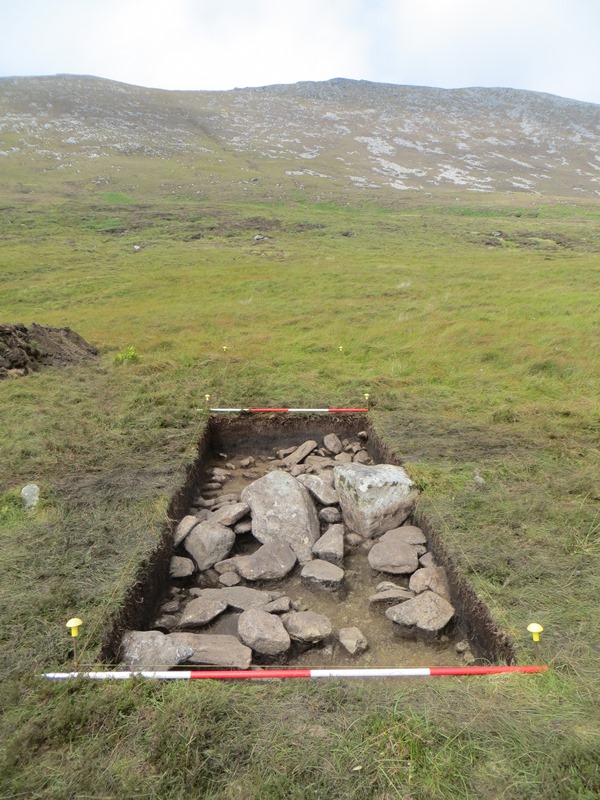 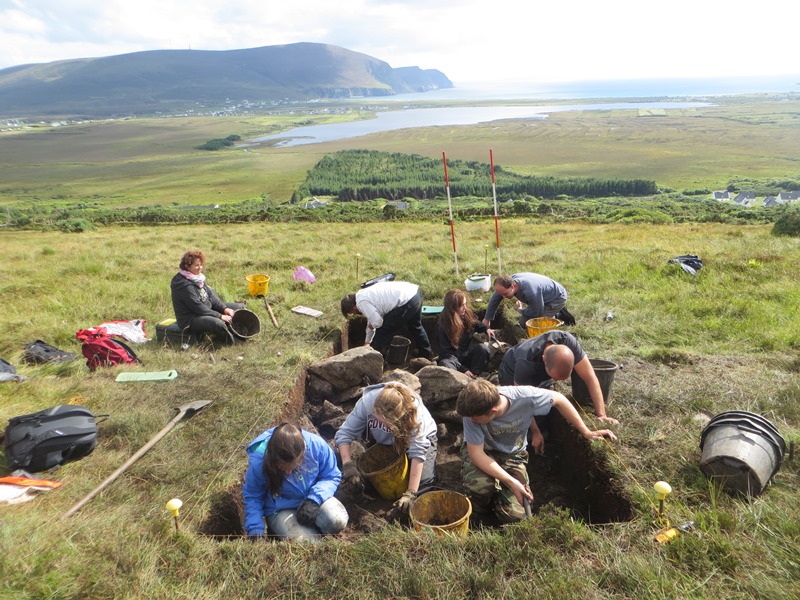 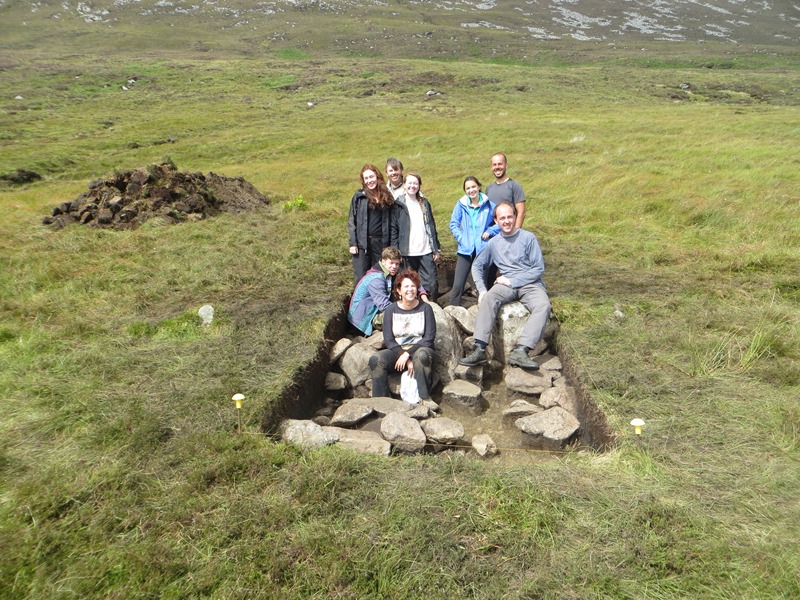 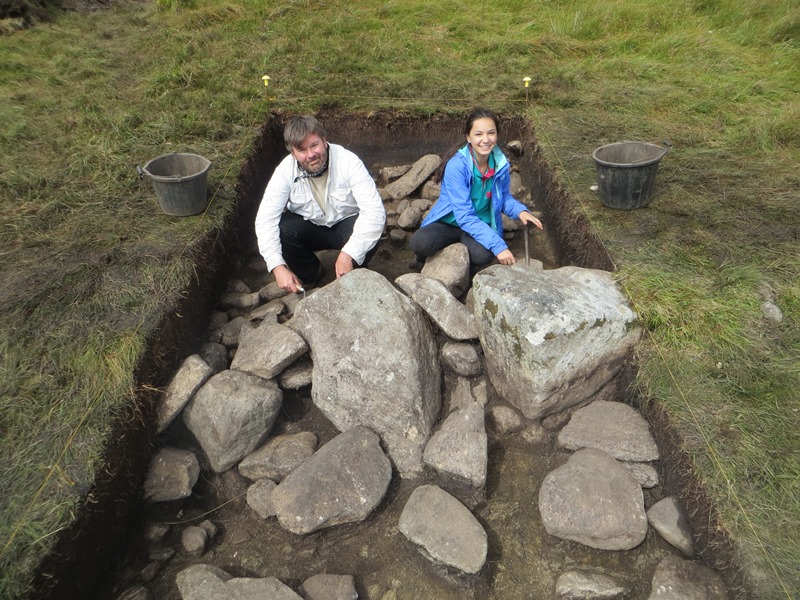 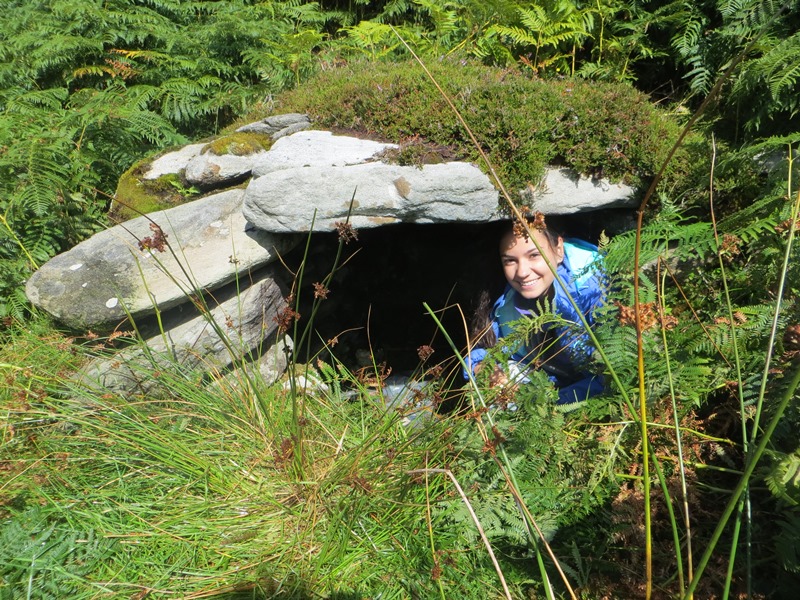 A completely new group of students arrived over the weekend, some for a week long course of excavation, and the rest on a two week course that consists of a week of excavation followed by a week of surveying work. Monday began with a couple of introductory lectures to help the new students get orientated. The first lecture detailed the work undertaken by Achill Field School since 1991, by our founder, Dr Theresa McDonald. The second lecture was by Stuart Rathbone, the Director of Fieldwork,  and provided an in depth summary of the work we had undertaken this summer at the Cromlech Tumulus site, and at the Pony Graveyard site that we excavated in the Spring.

In the afternoon we headed up to Slievemore where a 5m by 2m trench had been laid out over what we sincerely hoped would be the location of part of the Danish Ditch, the first of four trenches that we hope to excavate across the feature during this project. The Danish Ditch is shown on the first, 1838 edition of Ordnance Survey Sheet 42, where it is marked as a simple line connecting the Cromlech Tumulus site to the Court Tomb to the east, and then from there running southwards down the slope of Slievemore Mountain, terminating at a point close to the eastern end of the Deserted Village. We have long suspected that this feature was probably a substantial prehistoric field wall or bank and that at some time since the 1830’s it had transformed from a highly visible feature to an essentially invisible one. Whilst there are a large number of reasonably visible pre bog field walls on Slievemore, the Danish Ditch is the only example that was included on the 1838 map suggesting it was particularly prominent at that time. Our small trench was therefore a trench with a number of different goals. Firstly, could we locate the wall and establish its scale and design, secondly could we date the feature, and thirdly could we figure out what had happened to it since it was first recorded in the late 1830’s. By the end of the afternoon we had most of the de-turfing completed and there, in the rather ragged looking hole, was a short but impressive section of a pre-bog wall.

On Tuesday morning we were met by a calm, still day with no sign of even the faintest breeze and that means one thing in the boglands of Ireland… midges! These tiny biting insects are a real pain and very distracting, so we took the brave decision to run away for the morning. Heading further up the slope and a little distance over to the west we visited a very curious group of diminutive huts that were investigated by Achill Field School between 2006 and 2008. Sadly these investigations had proved rather inconclusive and we are still not sure what these huts were used for or when they were constructed, but they certainly are a spectacular and rarely visited site. When the breeze picked up enough to chase away the midges we headed back down to the Danish Ditch and spent the rest of the day, and the first half of the next day straightening up the trench and cleaning down the section of wall we had uncovered. By Wednesday afternoon the trench had been fully excavated and was ready to be photographed. The students spent the rest of the afternoon recording the long sections of the trench. On Thursday the students planned the trench to complete the drawn record from the excavation and then we prepared the context sheets to complete the written record. During the afternoon we carefully back filled the trench and by the end of the day the turf sods had been replaced so that from a short distance away it looked as if we had never been there.

The excavation may have been short but it was a great success. Not only had we found the wall we were looking for, we had a good idea of how it had been built, in this area at least. The wall in the trench consisted of two very large upright stones and the gap between them had been filled with smaller stones, many of which had collapsed in antiquity. This is quite a distinctive panelled type of dry stone wall that was still in use on parts of Slievemore in the 19th century! Furthermore the collapse from the wall had fallen onto a paleo soil and we managed to extract a reasonable amount of charcoal from this soil layer, certainly enough for a C14 date. Whilst this would not give us a precise construction date, it should give us an idea of when the wall was still in good repair, which is about as good a result as you could hope for from a pre bog wall, which are notoriously hard to date. Finally we found a small piece of 19th or 20th century glass down the side of one of the two upright stones of the wall. Whilst this may have penetrated the soil through some natural process this does rather suggest that the wall had been interfered with in the last 150 years. If the wall had been robbed out for building stone for the field walls to the south this would go a long way to explaining why the wall had been visible enough to necessitate drawing it on the first edition Ordnance Survey map but why it is so hard to spot on the ground today.

Friday was spent on a wonderful tour of guided tour of some of the highlights of Achill and the adjacent parts of the mainland, including Slievemore Deserted Village, Rockfleet Castle, Burrishoole Friary and parts of the Ballycroy National Park.