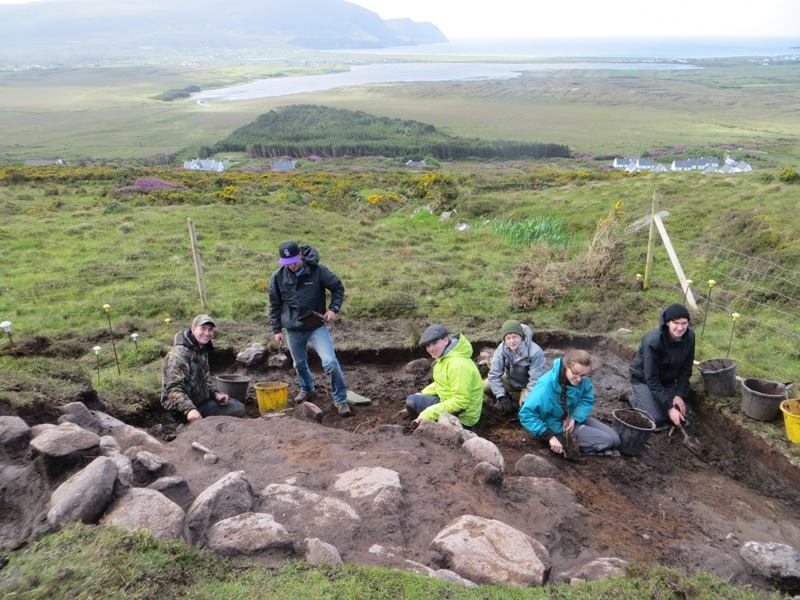 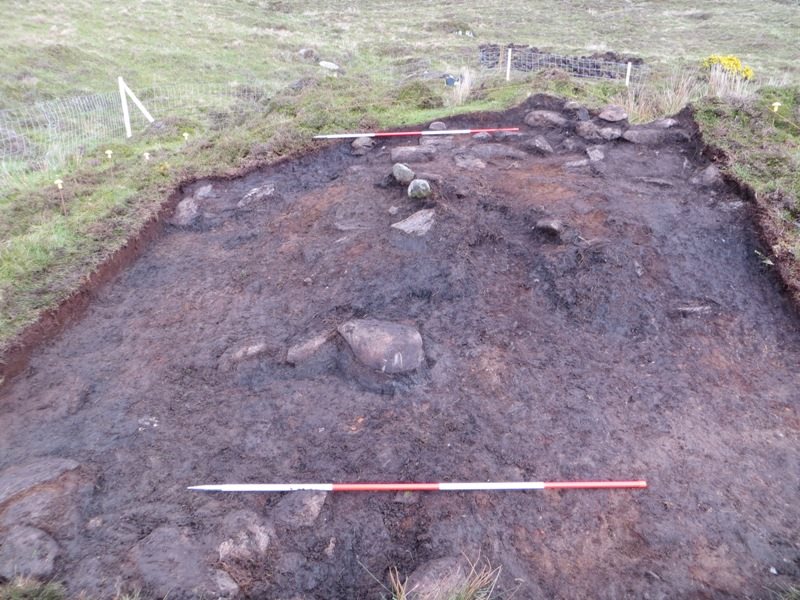 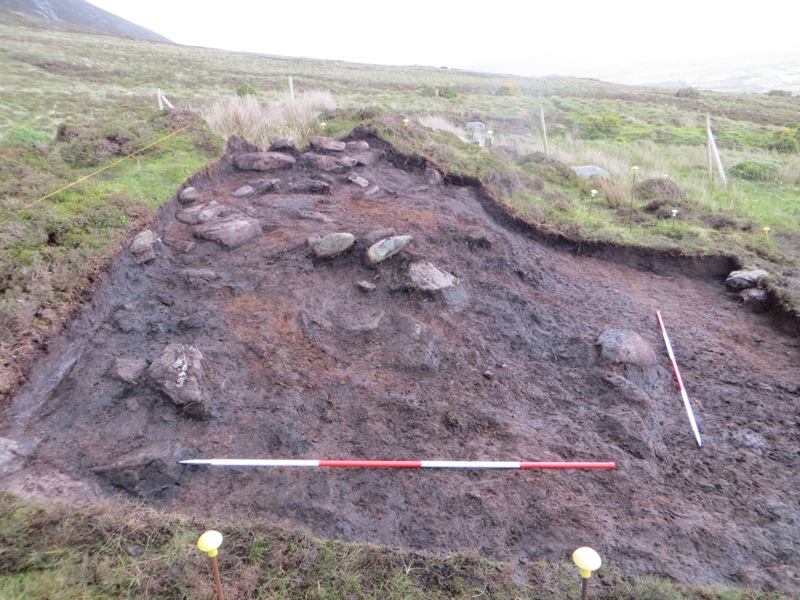 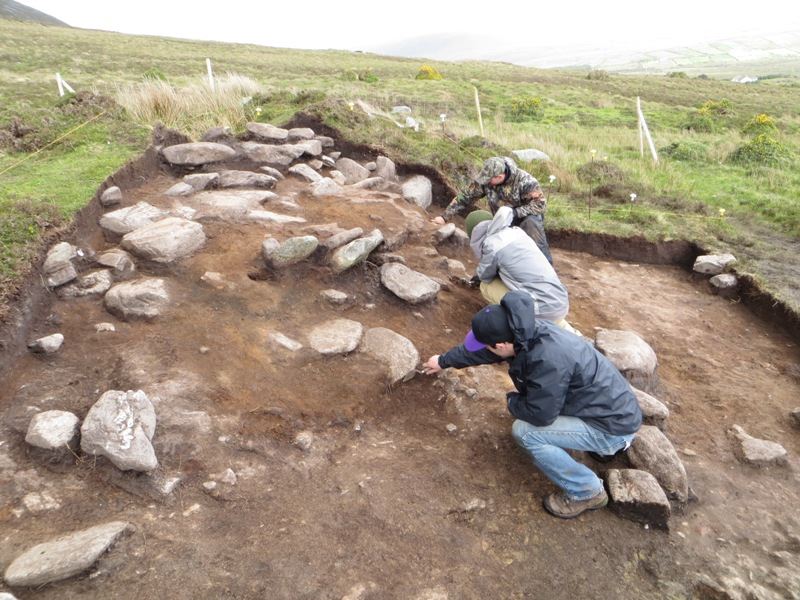 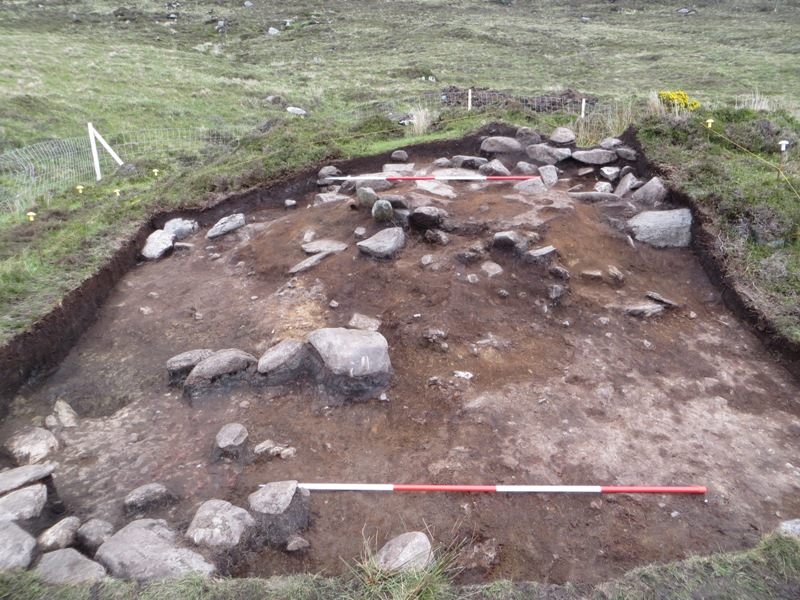 The first week of an excavation is always one of the most exciting parts of any project. After months of preparation and consideration, after filling in all the paper work and doing all the setting out and surveying work it is finally time to see what the site is like, always a concern at this stage.  For example, are the trenches in the right place? Is the archaeology similar to what was predicted? Is the methodology going to be appropriate for what is actually uncovered? Do we have the right equipment to undertake the job? And when we finally begin, can we be sure that we will have a positive answer to some or all of those questions?  On the other hand,  archaeology would hardly be any fun if it was all predictable.

So how did we do on the first week of the excavations at the Cromlech Tumulus site on Slievemore Mountain? Well I don’t think we did too badly at all. The first trench cut at the western end of the site is perfectly located over the turf mound, with everything neatly contained within its boundaries and nothing jutting out at an unexpectedly weird angles..  There are no immediate problems with the chosen methodology and no reason to suspect we shall be needing any equipment we haven’t already on hand.  The one little cloud on the horizon is that whilst the archaeology is pretty much the exact shape we thought it would be, and it is clearly in the place we thought it would be, it is certainly not made from the stuff we had predicted and it really isn’t the type of archaeology we had expected either.

As you will know,  if you read the preamble to this project that was written in the period leading up to the commencement of the dig, we felt pretty confident that we would be excavating some sort of circular stone-built building occupying the western  half of the site. In particular,  we thought we might well be dealing with a largely intact corbelled stone building, something a little bit like the classic igloo design, but built of rounded field stones rather than snow and ice. As it turns out it seems that we are looking at an earthen mound, with properly constructed stone elements only on the summit of the mound. This has thrown up two really intriguing sets of questions. Firstly,  what is the mound made of? It has quite a large number of stones in its upper portion, but these are not apparent in its lower portions. Has there been a degree of slumping that has concealed the stones that form part of the lower portion of the site? Or is this some sort of stone capping restricted to only the upper parts of the mound? The second interesting question revolves around the small circular building that occupies the summit of the mound. Prior to the excavation this had been assumed to be the inner wall surfaces of the expected circular stone building. However at the moment this seems to be a building constructed on top of the mound and it is not clear whether this is part of the original design of the mound feature, or whether the building belongs to a later period and has been placed on top of a pre-existing mound because it was a convenient place to build it.

So after a week we can’t really say that we understand what the site is, and it would be unwise to start speculating about a likley date before we have even found any artefacts. However a total absence of post-Medieval finds does rather suggest we are looking at something of a considerable age, and perhaps we are seeing that the use of the term tumulus to describe the site was more appropriate than we had previously thought. The first quadrant should be ready for recording during the early part of the second week and by the middle of that week we hope to have started working on the second quadrant. Hopefully when we begin to excavate the second quadrant we shall find a continuation of the mound feature. Certainly we should then be in a position to get a  better look at the centrally located building although it will be quite a few weeks before we are ready to excavate its interior.