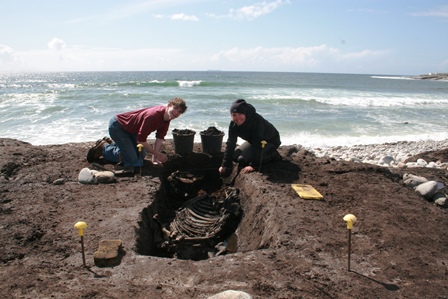 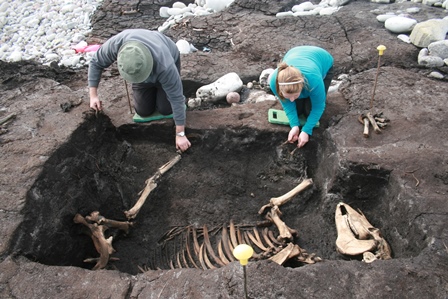 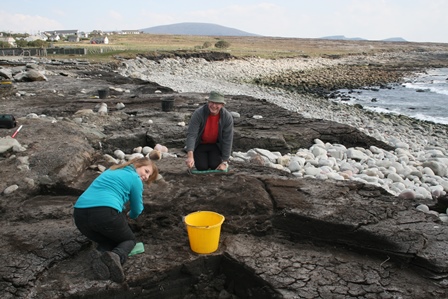 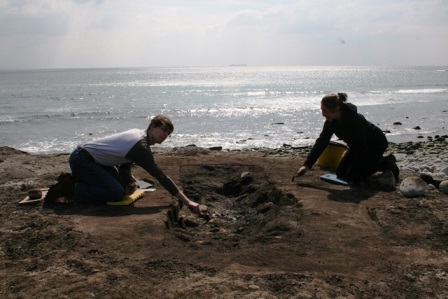 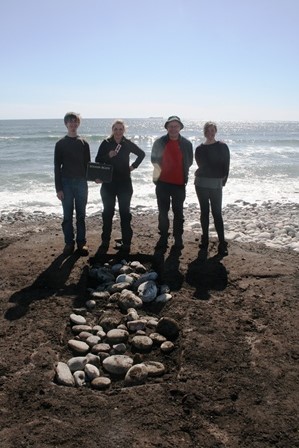 The onset of winter is a quiet time on Achill Island, but staff at the Field School were kept busy dealing with applications from students for places on the AFS 2015 Field School programme, as well as answering the myriad of queries that crop up at this time each year. The autumn period was spent processing a huge amount of data from the Bunnacurry Graveyard Survey which is now being converted into ArcGIS and which will be uploaded to the web by Achill Historical & Archaeological Society in late January 2015. The survey was described in week fifteen of the Interactive Dig.

This entry is a description of a small project we undertook in the early spring of 2014 prior to the commencement of the Field School and the main excavations at the Cromlech Tumulus site at Slievemore.

During January and February 2014 the coast of Ireland took a tremendous battering when a series of very strong winds coincided with particularly high tides to create fierce storm surges. These powerful waves exposed a multitude of new sites around the Irish coast. Much of the attention in the media focused on preserved forests that emerged from previously concealed peat beds and which are generally thought to date from the Neolithic period or the Bronze Age. A small example of a submerged forest is a well-known attraction at Dugort on the north-east side of Achill Island, and other less well known examples can be found at several other locations on the island. The storms in January exposed a large peat bed at Dooagh on the south side of the island, which had previously been concealed by a deep bank of sand and shingle. That stretch of the beach where the peat bed had been freshly exposed was located no more than 100m from the Achill Archaeological Field School premises and so, as soon as the weather calmed down, we decided to explore the site. Initially what we had hoped to find was some trace of the early prehistoric occupation of the island, which is well known from the higher ground but very poorly understood around the coast. Whilst we did find traces of a submerged forest at the base of the peat, there were no traces of archaeological material at that depth. However cut into the top of the peat bed we discovered a much more recent but no less fascinating archaeological site, one that revealed a previously very poorly understood part of the islands’ recent past.

The freshly exposed peat bed at Dooagh Beach was up to 3m deep in places. When we first visited the site the upper surface was found to be surprisingly undulating, with large gashes carved out of it. Initially our attention was focussed on the base of the peat bed where the old forest levels could be seen, and at first it was assumed that these strange shapes in the upper surface were simply a result of erosion caused by the storm surges. A subsequent visit indicated that the gashes were actually a whole mass of bathtub-shaped pits that had been scoured out by the waves and partially filled in with shingle, sand and seaweed. Closer inspection revealed that underneath the shingle some of the original fills were intact and that these contained large mammal bones. What was not clear at first was whether the pits were simply refuse pits containing an assortment of disarticulated animal bones, or if, as we began to hope, they contained entire skeletons of farm animals. Discussing the site with a number of people in the village, together with information recorded by Dr. McDonald from her late uncle, John Moran, suggested that the site had been used to bury animals during the early 20th century. Seeing as the majority of bones seemed to belong to the genus equus, we began to suspect we had found an apparently unique example of a ‘Pony Graveyard’!

We became increasingly interested in the site that had appeared so unexpectedly on our doorstep and decided that at the very least we needed to survey the site before it was subject to any further damage. Using our high precision GPS units we rapidly mapped out the site and it soon became clear that there were a number of pits along the northern end of the site that had not been emptied out by the storm surges and which potentially could contain intact animal skeletons. In total almost 30 pits were identified in the exposed peat bed, but further along the beach the peat bed could be traced in the cliff face and at least another 30 burials were identified along this stretch, where bones could be seen protruding from the cliff face. This was all too tempting for our organisation and so a license to excavate some of the pits was applied for and in March we were able to excavate two of the intact pits with a small group of students. We were also joined by David Blauvelt, a former student of the Field School who rather fortuitously was looking for a topic for his Masters thesis in osteoarchaeology!

The two pits we excavated did indeed contain complete pony skeletons that are thought to date from the late 19th or early 20th centuries. Preservation was quite remarkable, with elements very rarely seen still perfectly preserved, including cartilaginous elements such as the ‘costal ribs’ from the underside of the belly and even the brain was preserved inside one of the skulls! The two ponies showed evidence of having had a hard working life with considerable damage to the ribs, deformation of the spine and heavy wear to the teeth where iron bits had been used to control the animals. The size of the animals suggest they were typical of the working animals used extensively on the west coast of Ireland for all manner of utilitarian purposes during the 19th and early 20th centuries.  One of the ponies had been buried with its legs crouched underneath its body, suggesting it had been killed at the side of the burial pit and then lowered into place. The other pony was buried in a much larger pit and had its legs fully extended. This strongly suggests it had died elsewhere on the island and had been brought to the beach for burial after rigor mortis had set in.

As mentioned above this is currently a unique site type in Ireland; no mass burial plots of draught animals have been identified or reported elsewhere. Ponies did not form part of the human diet in Ireland and remote communities such as those on Achill would have no access to the abattoir facilities that would be needed to render the body of a pony down into useful components. This lack of facilities necessitated the burial of the bodies of these large animals and we suggest that other similarly isolated communities on the islands and remote peninsulas of the West Coast may have used similar burial grounds. It may therefore only be a matter of time until further examples of ‘Pony Graveyards’ come to light.

A guided field trip to this site will be available to students attending the 2015 Achill Archaeological Field School.  They will also be able to view the skeletons of the two ponies, which are stored in the Field School Laboratory.