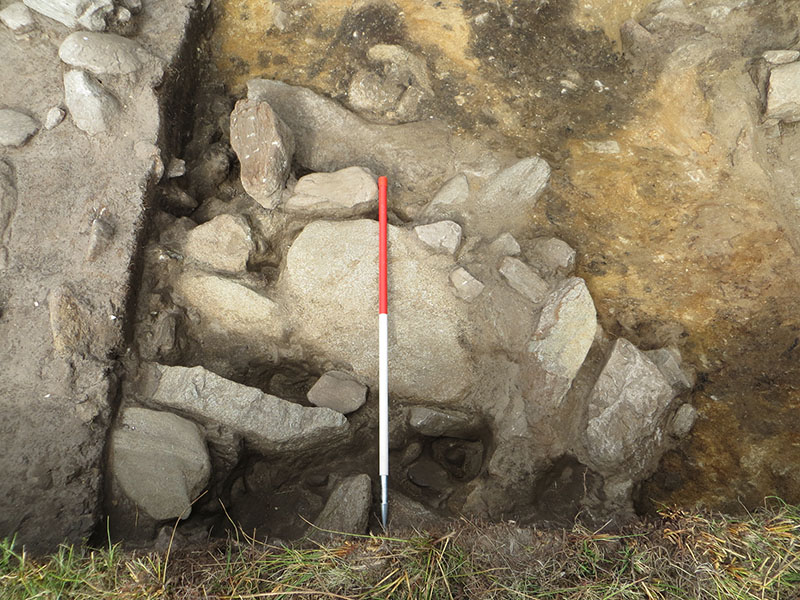 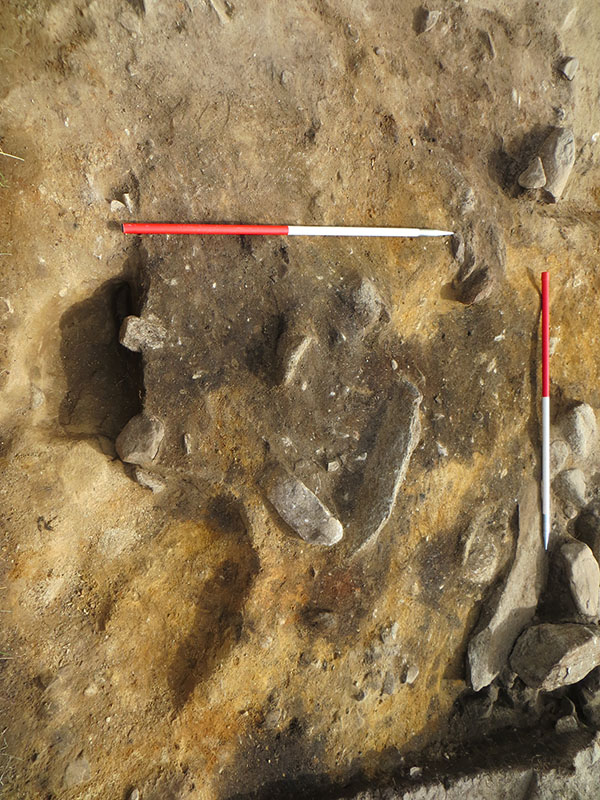 The final week of the first half of the summer season programme (Modules 1 and 3) was a short one on site. Monday and Tuesday were spent excavating, cleaning and recording the newly revealed features in Quadrant 4, and completing the section drawings of the sides of that trench. In between all of that work we made a concerted effort to get the site archive up to date, so there was quite a frantic period of filling in the various registers and writing-up context sheets. We also managed to squeeze in some time to give the trench a final clean for some great photographs of the pits that were under the burnt-stone spread.

Wednesday was reserved for our final field trip, a walk over the moor and bog to the Booley (Transhumance) settlement at Annagh on the north side of the island. This has to rate as one of the very best surviving example of a Booley settlement in the whole of Ireland, with three of the buildings in the cluster surviving up to roof height and allowing us to see how the corbelled stone roofs appeared when the huts were in use. After examining this charming settlement we walked around the coast to the beach, stopping in to see a nineteenth century fishing station and a set of upright stones that are thought to represent the surviving uprights of a Neolithic Portal Tomb that was largely robbed out in order to build the adjacent fishery. After a quick swim and a walk along the low cliffs we walked back over the ridge to the southern side of the island stopping off on the way home to see a couple of small nineteenth century buildings with curious subterranean elements which await more detailed investigation.

On Thursday, we headed into the computer lab where over the next two days the crew produced digital versions of the rest of the plans and sections from the first six weeks of the excavation, and processed the results of the GPS Survey that they had worked on the week before at Dun na Glaise (The Green Fort) Promontory Fort on the islet between Achill Island and Achillbeg Island.  On Friday evening we celebrated a successful first half to the season with bacon rolls and a few quiet drinks!

A massive thanks to Julian, Nick, Clay, Ray, Jared and Morgan who have done such a great job on site and helped to give the excavation the best possible start.

We extend a warm welcome to Lauren, our Trainee Supervisor who arrived on Achill last weekend and we look forward to welcoming a new group of students this coming weekend.