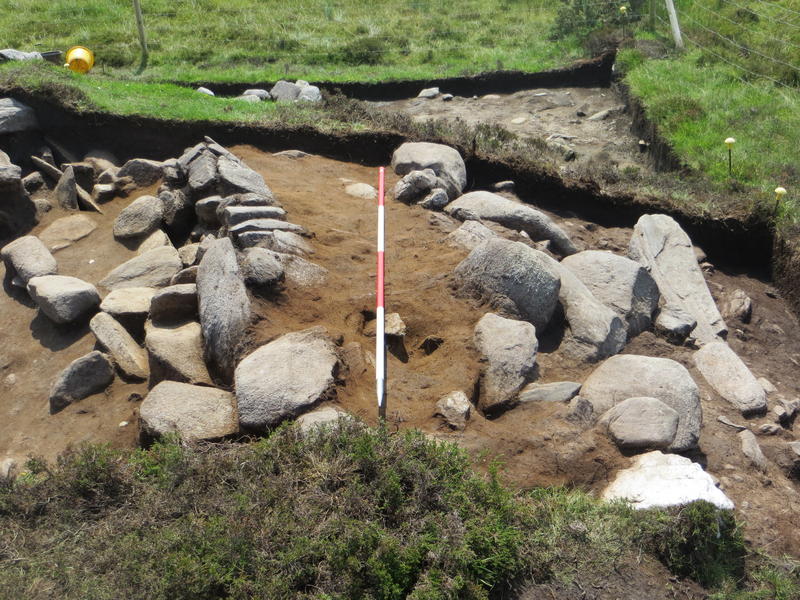 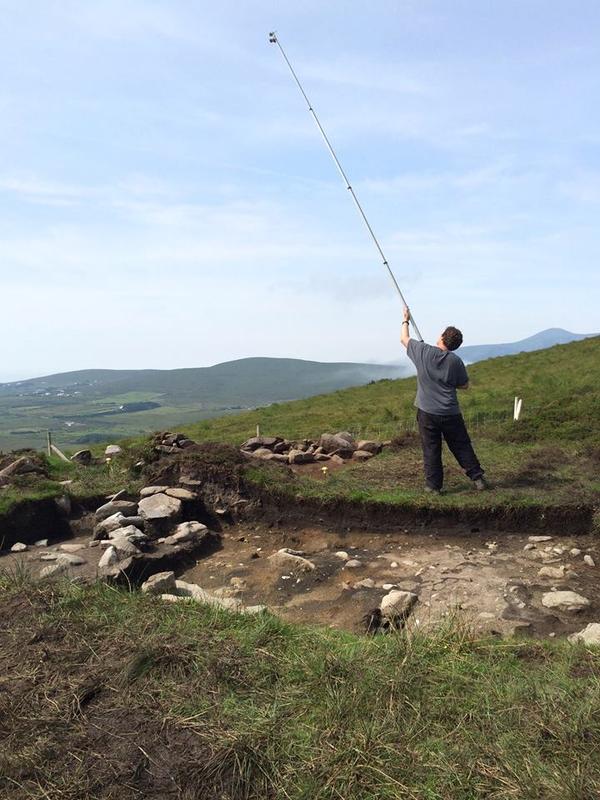 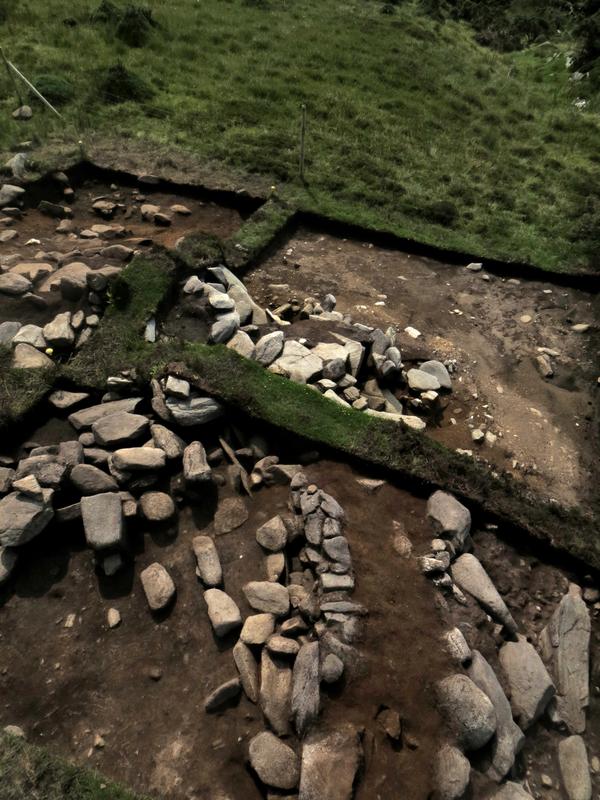 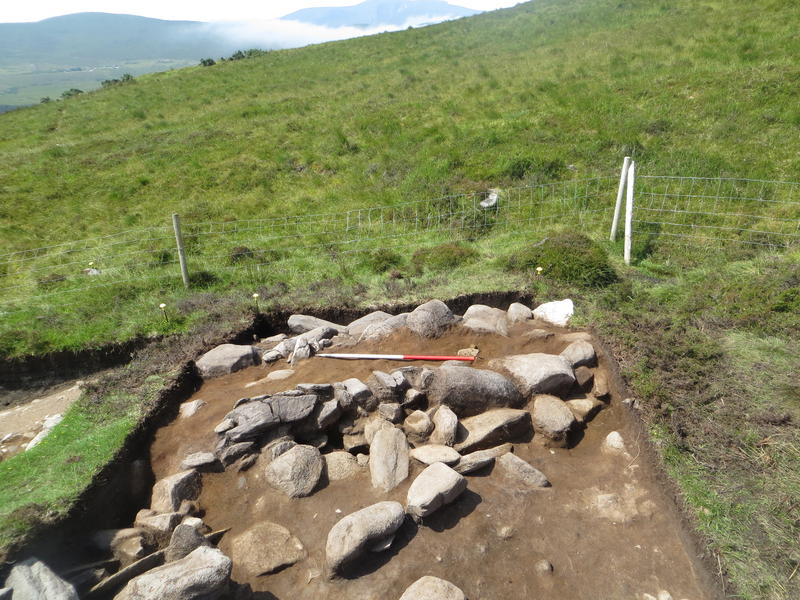 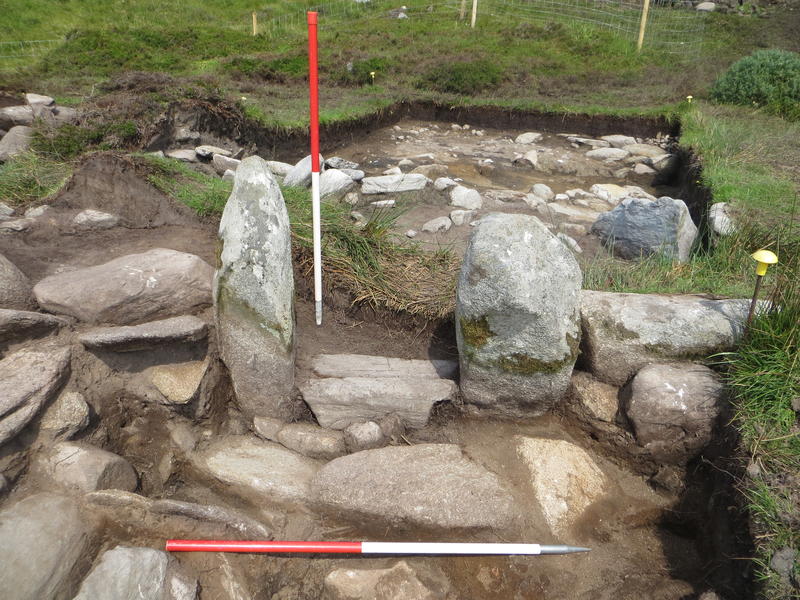 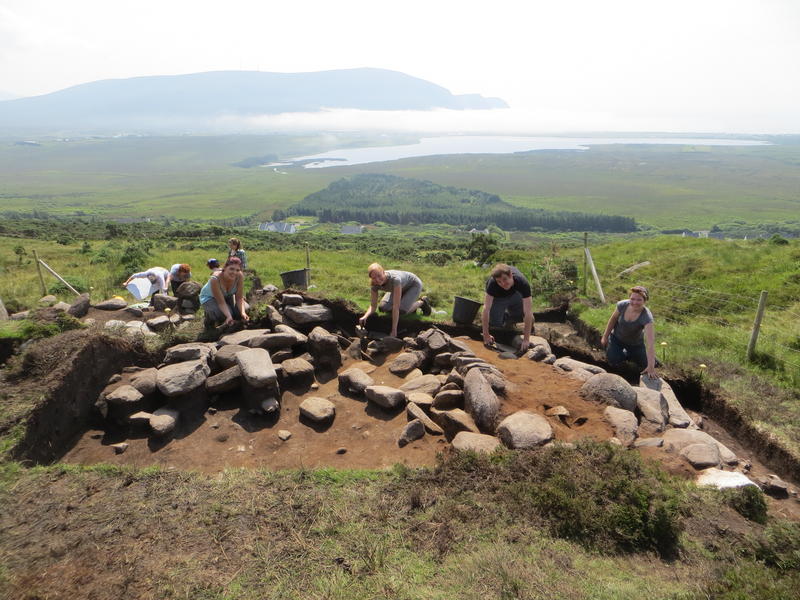 On Monday, the team in Quadrant 2 continued working down the slope removing the soil build-up. Work also began in the area around the entrance, removing the remaining peaty soils. Beneath the peaty soil a second sil stone running between the two upright stones was discovered which, combined with the sil stone discovered during week 8 would have provided a very substantial door step. Immediately outside of this entrance door a shallow hollow was found, eroded into the orange mound material, which was filled with a light grey silty soil. It seems this hollow was probably eroded into the surface of the mound by people walking in and out of the building through the adjacent doorway. By the end of the day team in Quadrant 2 had reached the bottom of the slope and the sheer size of the mound in this area was very apparent. The team in Quadrant 3 also continued cleaning up their trench, carefully following the upper surface of the dished soil within the enclosure wall and the inner building, a delicate job they managed splendidly!

On Tuesday, we attempted to give the two new quadrants a final clean-up in order to photograph them, but our plans were spoiled by heavy rain that started in the late morning and led to us abandoning site for the day by lunch time. The day was not to go to waste, however, and the students began their training on AutoCad which would have been scheduled for the following week. On Tuesday evening we had a guest lecture by Dr Kieran O’Conner of the National University of Ireland, Galway, who discussed his ongoing research into the symbolic and functional relationships between Medieval Castles and watery landscapes, including the coast, navigable rivers and artificial moats and lakes. The Wednesday field trip was to Keem Bay at the west end of the island (see week 3).

Unfortunately, Thursday was a complete wash out and we did not even attempt to head up to the site, choosing instead to complete the students training on AutoCad to produce digital versions of the site plans and section drawings. In the afternoon, they learned how to take the black and white line drawings generated in AutoCad and convert them into attractive colourful images using Photoshop.

The good weather returned on Friday, and the two teams spent the day cleaning their trenches from top to bottom. By the end of the day, we were finally able to take the required formal photographs of the trenches.  In the afternoon, the team in Quadrant 2 began preparing a plan of the trench, whilst in Quadrant 3 the team began working on the section drawings of the trench.