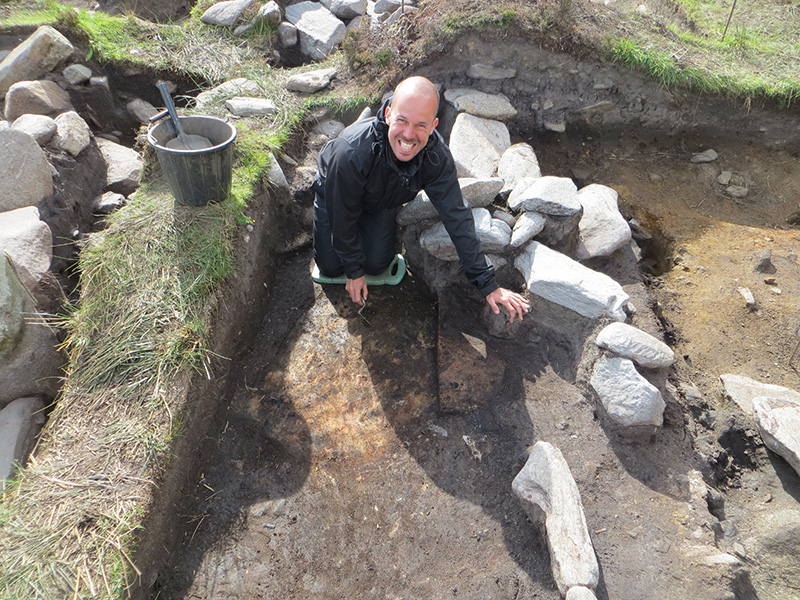 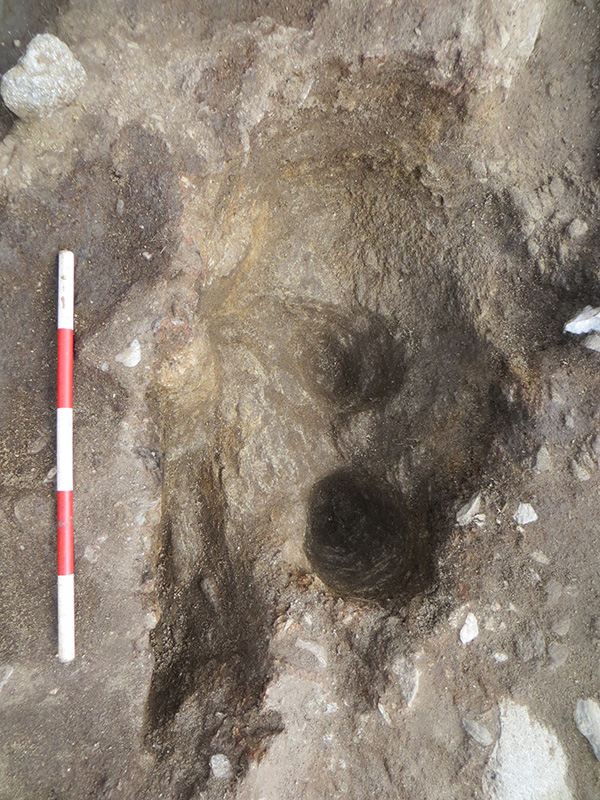 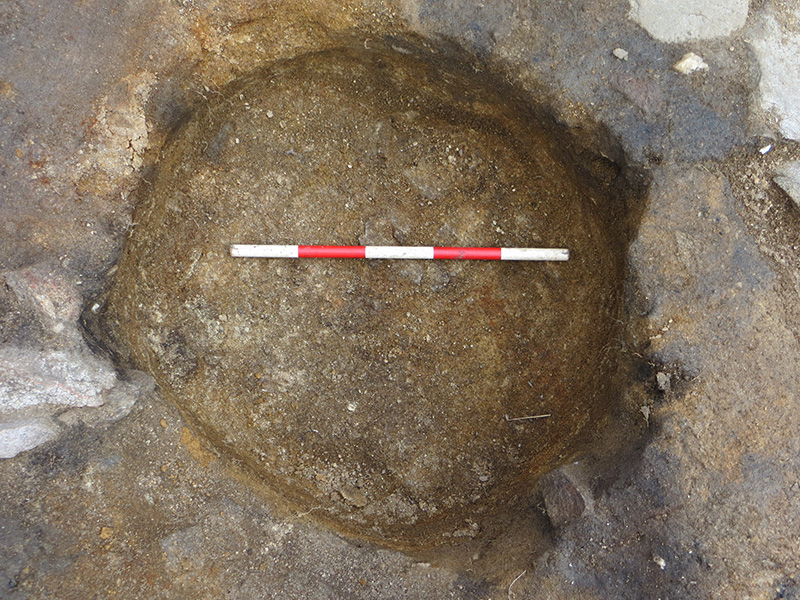 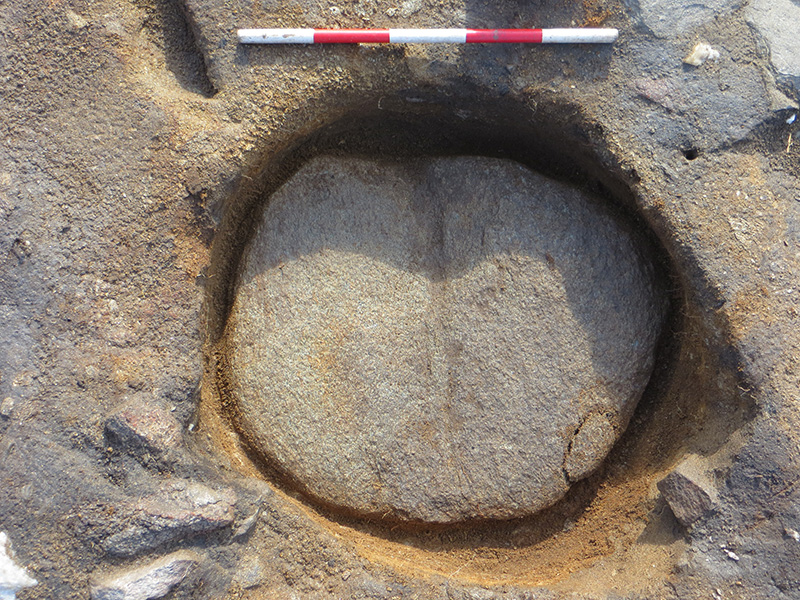 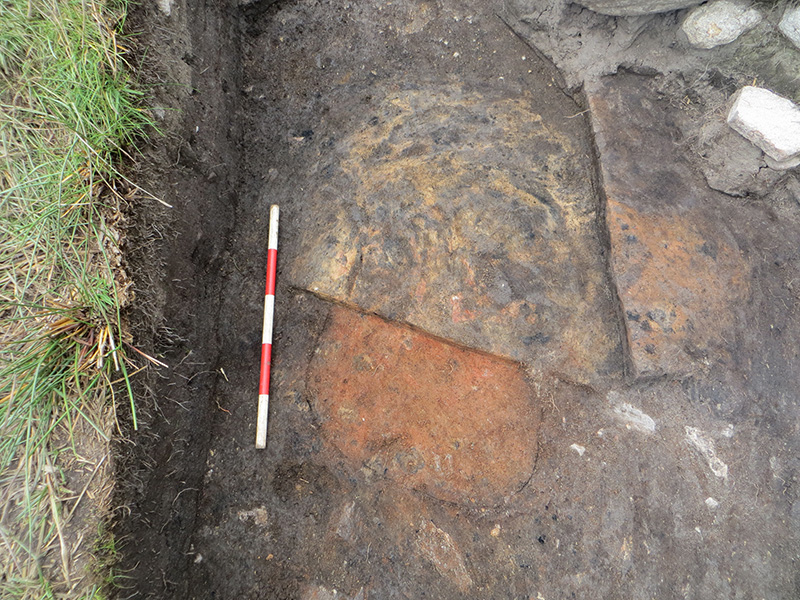 This was the final week for the main excavation and there were still quite a number of jobs that needed to be completed. The first job was to lift the circular slab at the base of the circular pit in Quadrant 4, but alas it had been laid directly onto the base of the pit and the elusive cache of datable artefacts we had hoped for here was noticeably absent. Following that we excavated the remaining fill in the western end of the gully towards the northern end of Quadrant 4, which led to the unexpected discovery of a group of intercutting pits and post holes that clearly predated the gully. Work continued on the interior of the inner building, carefully cleaning and recording the two overlapping hearths. Work was also completed on the northern section of Quadrant 2 which revealed a complete section through the deposits within the inner building. This work also demonstrated that the two upright door stones continued far below the level of the base of the wall of the inner building. This is really intriguing as it suggests that the two upright stones were part of an original entrance to the larger enclosure and that the much slighter inner building walls had been built up against them at a later date. Even the threshold stones appeared to be part of this secondary activity and this will no doubt prove to be an important detail when it comes to considering the chronology of the site in detail.

On Tuesday two teams of students were required to complete the final plan of Quadrant 4, now that all of the visible pits had been excavated, whilst the remaining students recorded the section at the northern end of Quadrant 2. We then turned our attention to completing all of the context sheets from Quadrants 2, 3 & 4, which was a fairly major task by this point given how many new pits and postholes had been discovered in Quadrant 4 during the previous few days.

On Wednesday we returned to Keem Bay where the students spent the day undertaking a comprehensive survey of the field walls and banks along the western side of the valley. This involved recording numerous profiles across the features using the autolevel, writing accurate descriptions of each wall or bank, and recording the locations of the profiles with our high precision GPS units. It was a tiring and rewarding day’s work and the students got to learn some new applications of the different techniques they had been using during the excavation.

Thursday morning was spent completing the final recording tasks around the site and sampling the two hearths in the inner building of Quadrant 4. Whilst we were sampling these hearths a third one was discovered and this led to some very rapid excavation to partially expose and record its eastern half. It seems that even though the inner building was quite crudely constructed it had been in use long enough for three formal hearths to have been required. With all of the recording completed we began backfilling Quadrant 2 in the afternoon and by the end of the day the original contours of the banks and slope had been accurately reinstated. Friday was spent backfilling Quadrant 4 which took most of the day but we were blessed with good weather and spirits were high as the fieldwork on the main site was completed for the 2014 season.  It is always sad to see a great bunch of students leave after six weeks, but on Saturday morning Ben, Sara and Christina were on their way back to Dublin and we were busy getting ready for the final influx of students for this summer.