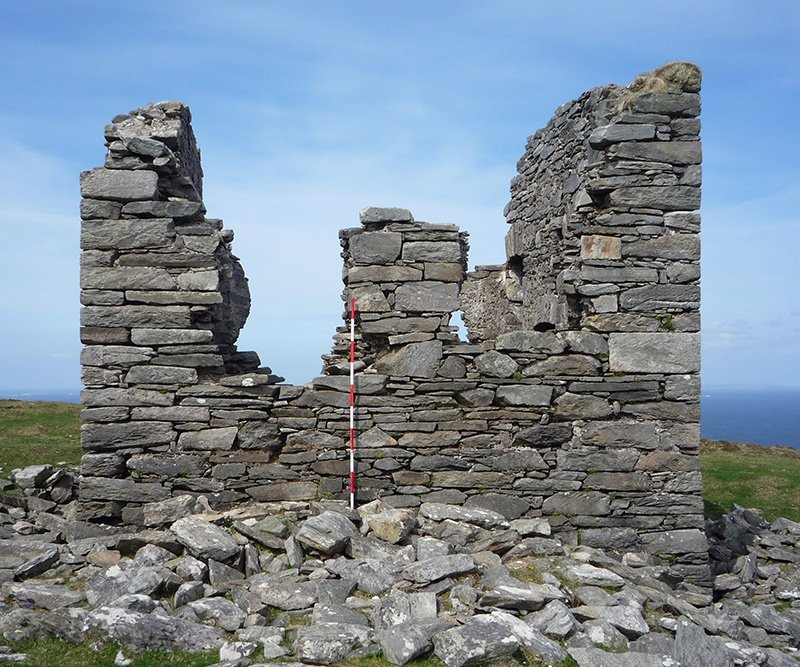 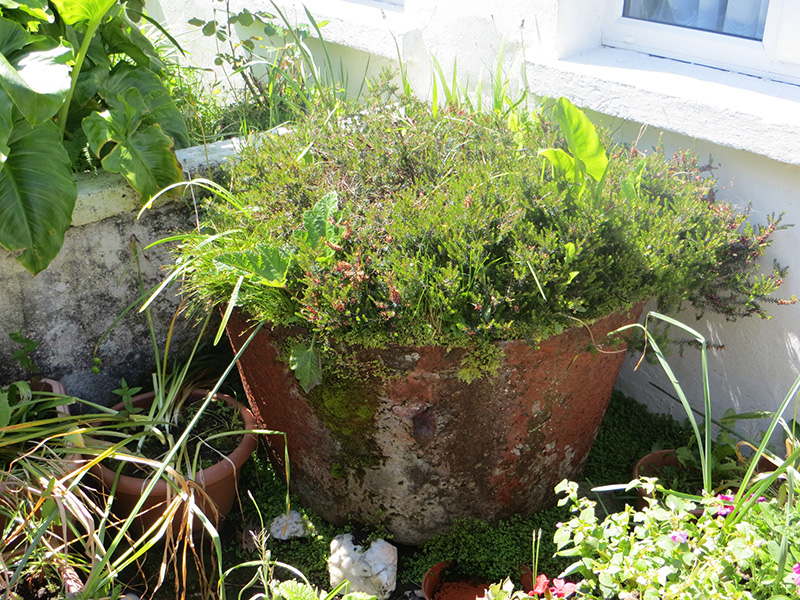 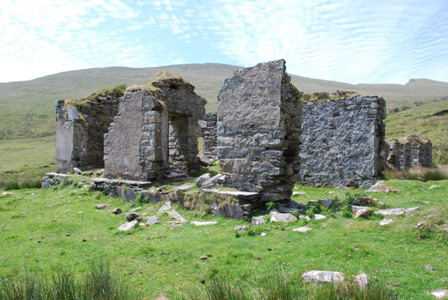 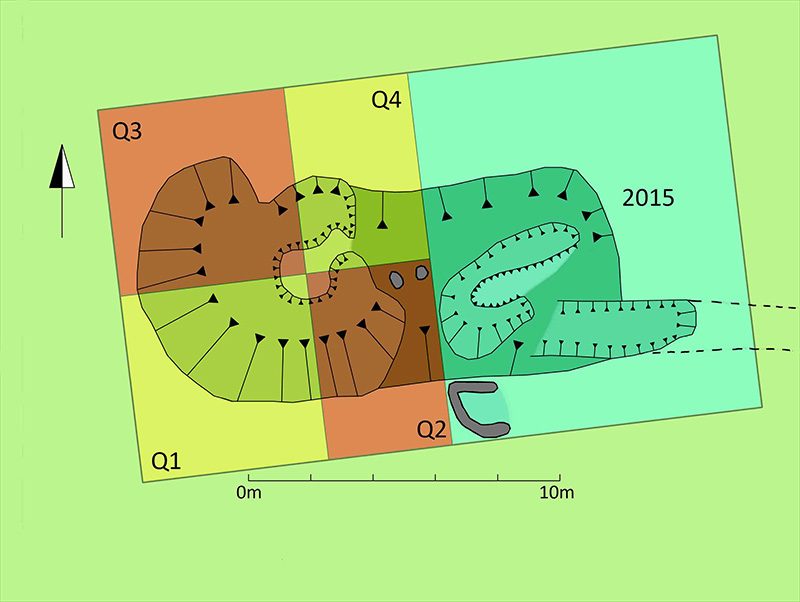 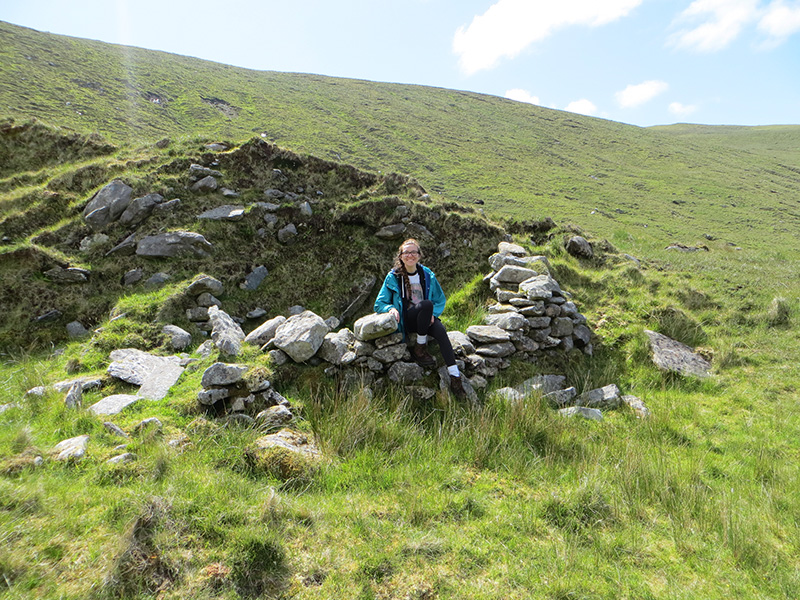 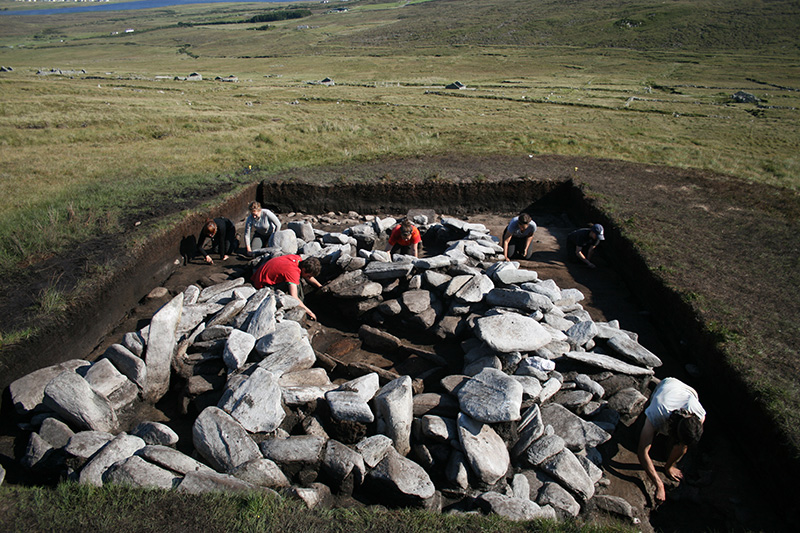 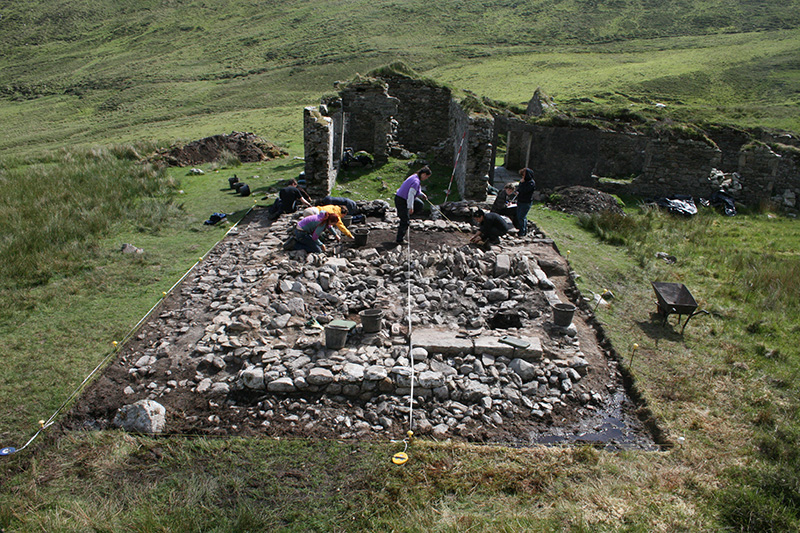 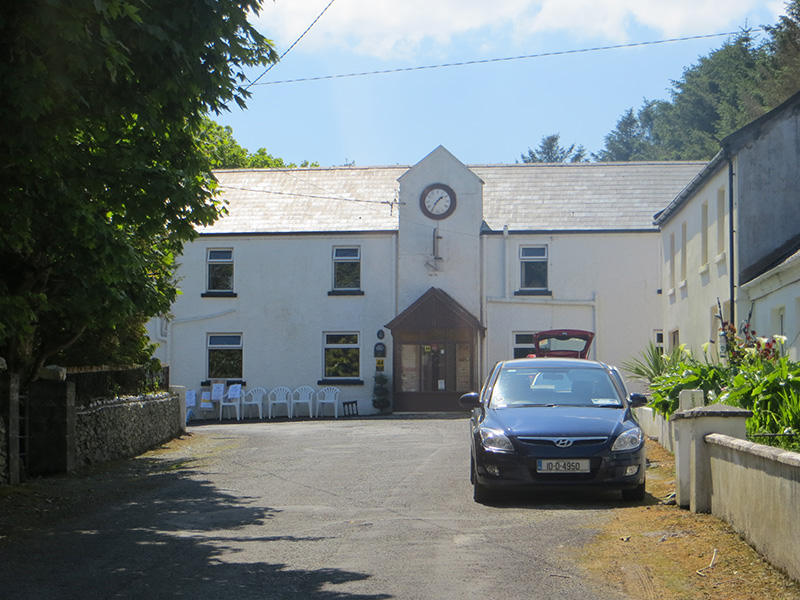 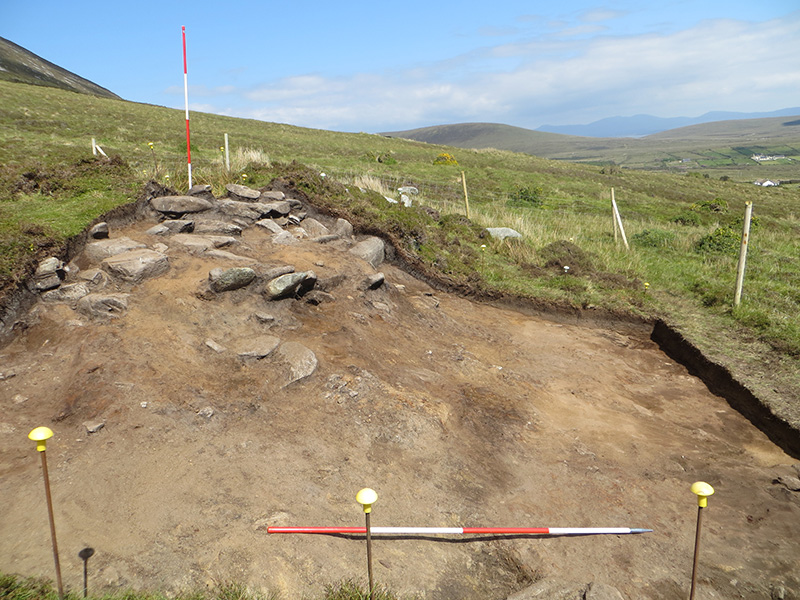 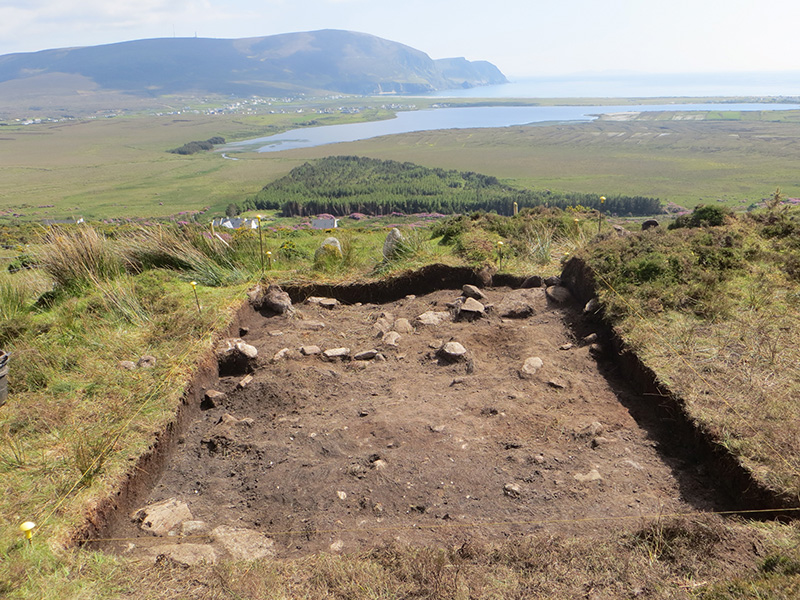 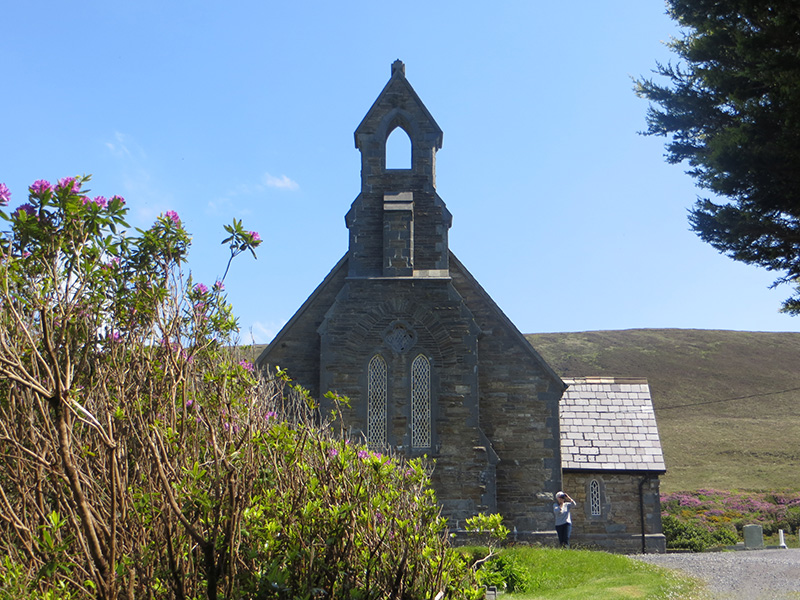 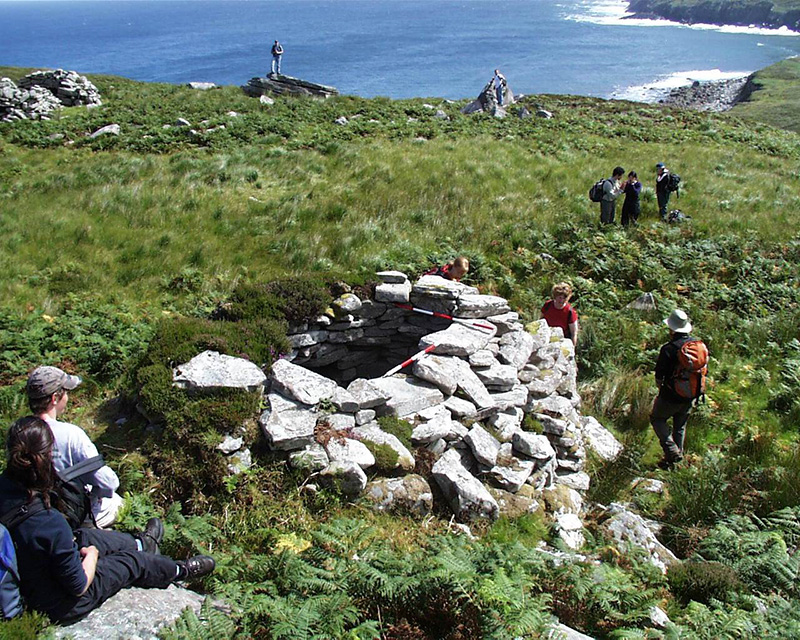 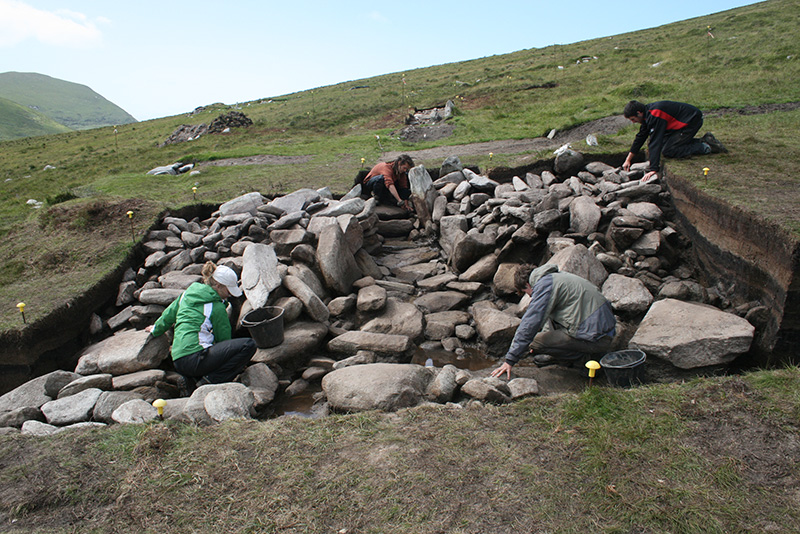 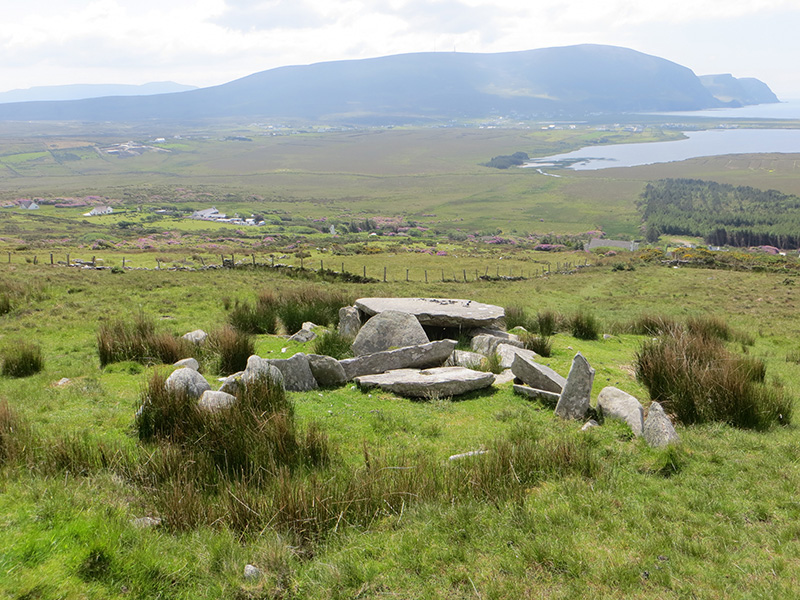 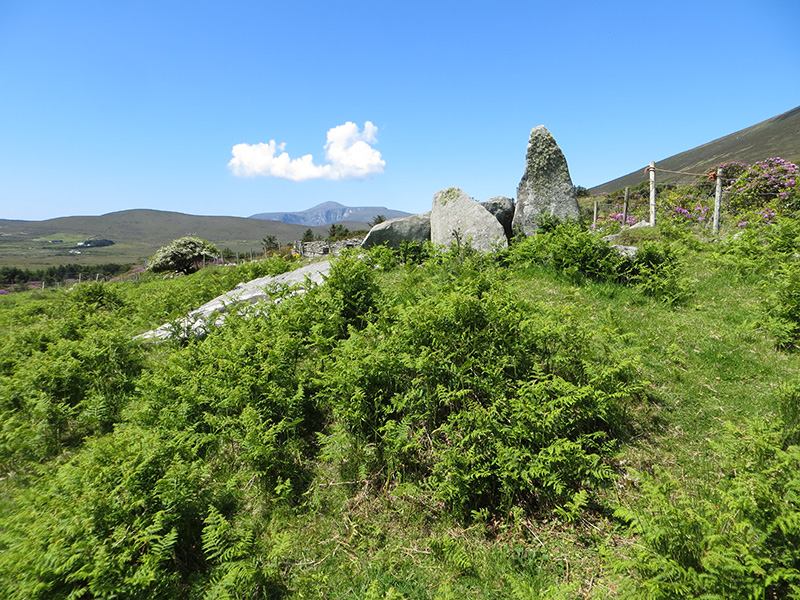 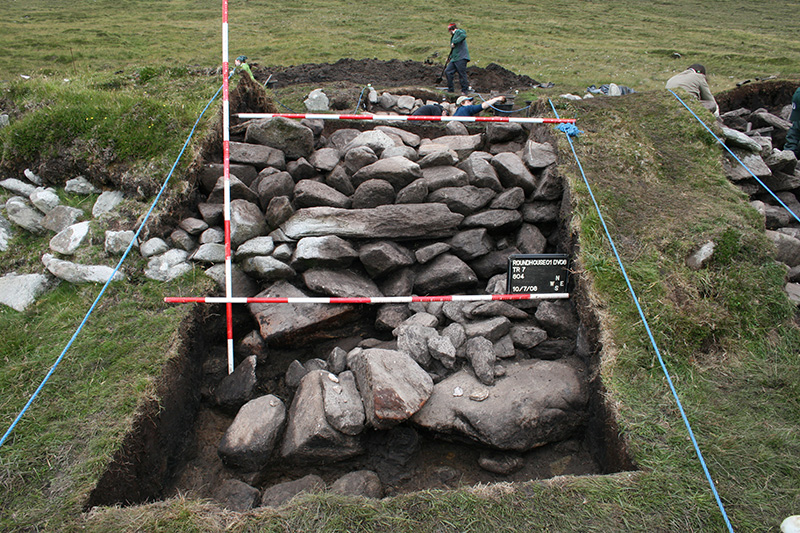 After the excitement of the first week of the excavation, when we removed the overlying turf from the south-west quadrant of the site to expose the upper surface of the circular mound and building, progress inevitably slowed down a bit during the second week. On Monday we finished the first phase of the excavation in the south-west quadrant, extending the sides of the trench out to their final positions and removing the remaining deposit of overlying peat and soil. The removal of this deposit revealed a large mound of yellow/orange soil with a small circular wall sitting on its summit and a curious assortment of fairly large stones poking out of the mound itself. It certainly was not the stone-built hut we had had thought we might find but there was undoubtedly a great deal of archaeology on show.

On Tuesday morning one half of the excavation team began the slow process of recording the south- west quadrant preparing a detailed 1:20 scale plan of the trench. The other half of the team began working on the topographic survey of the pre excavation ground surface across the rest of the western half of the site. This involved taking many hundreds of individual height readings across the site grid and the results will be used to create a 3D model of the site prior to excavation. This process of topographic modelling will continue throughout the summer with each significant phase of the site being recorded in the same way. At the end of the summer we will have a series of 3D models of the site at different stages in its development and these will be really useful when it comes to presenting the results of the excavations.

On Tuesday afternoon we were joined by a group of High School students from Carrick-on-Shannon, Co. Leitrim who travel to Achill to participate in the excavations for one day during each summer. The team that was working on the topographic survey took time off to help the high school students de-turf the north-east quadrant of the site. By the end of the afternoon the north-east part of the circular building on top of the mound had been revealed, and several concentrations of stone work could be seen poking intriguingly from various parts of the new trench.

The Wednesday field trip included visits to some of the other megalithic sites on Slievemore Mountain, followed by the famous Achill Missionary Settlement at Dugort, which is a very controversial part of the nineteenth century history of the island, a submerged and preserved Bronze Age forest at Dugort Beach which we managed to visit during a particularly low tide, and the burial ground, settlement and shell midden sites at Caraun Point in Dugort towards the north-east corner of the island.

On Thursday half of the team continued with their recording work on the south-western quadrant of the site and by the end of the afternoon they had a complete plan of the trench, with hachures denoting the complex slopes that were present across the trench and (not so!) subtle shading differentiating in situ stones from loose collapsed stones lying around the base of the mound. The other half of the team got stuck into the newly opened north-east quadrant, removing more of the overlying peat and ensuring a slightly a more uniform depth was reached across the base of the trench than the high school students had managed.

On Friday the team working in the south-west quadrant took height levels on all of the collapsed stones lying around the base of the mound and these were then be lifted out of the trench leaving only the intact structure visible in the trench.  A detailed set of photographs were taken of the trench at the end of the day. In the north-east quadrant, the first stage of work in the new trench was completed, with the sides extended to their final position and the top of the pre peat deposits given a meticulous cleaning. It was far from clear what was happening in this trench but by the end of the day photographs of the different deposits were taken and the layers were left ready to be recorded on Monday.