The Prehistoric Landscapes of Slievemore and Historical Archaeology at Keem Bay 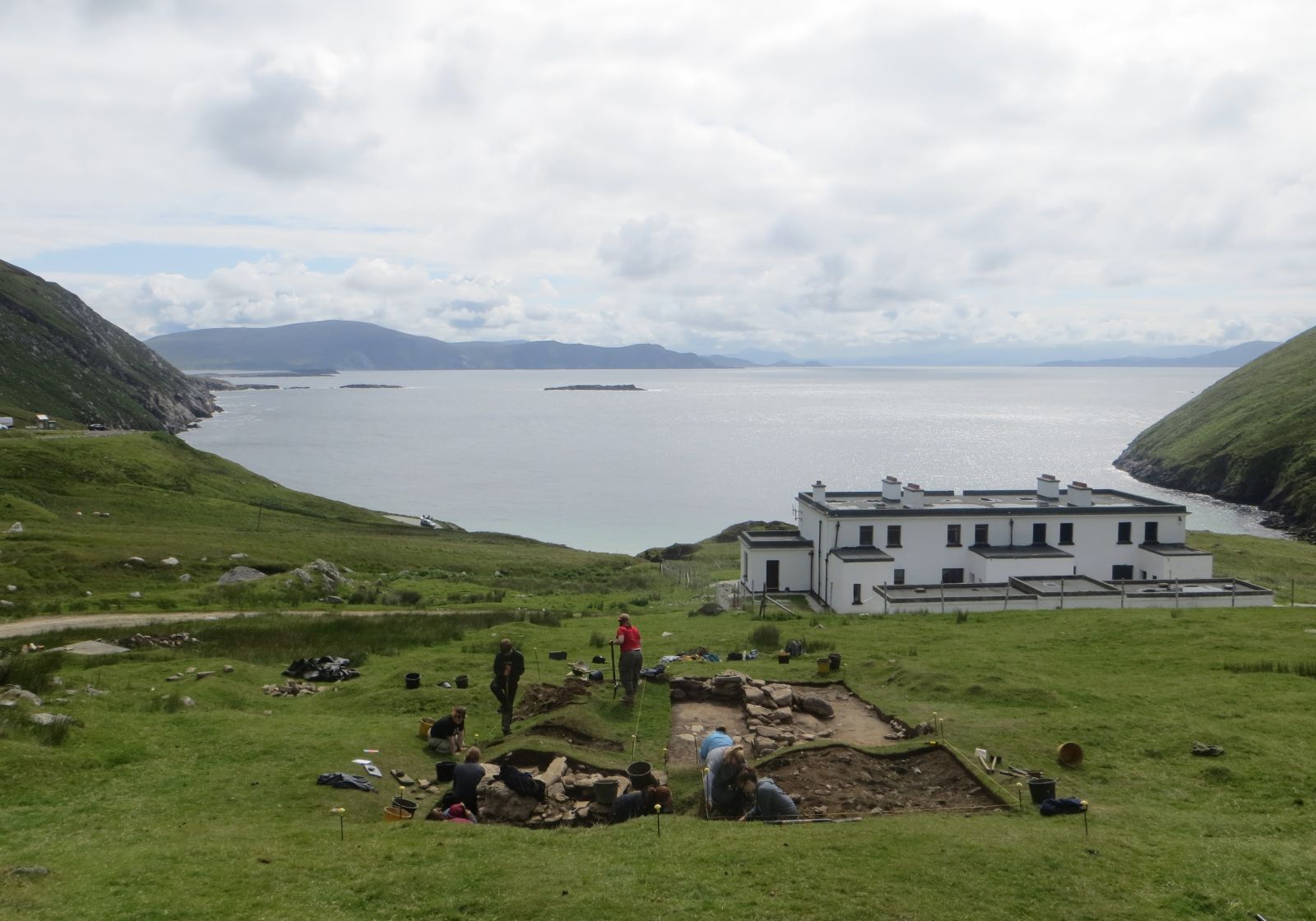 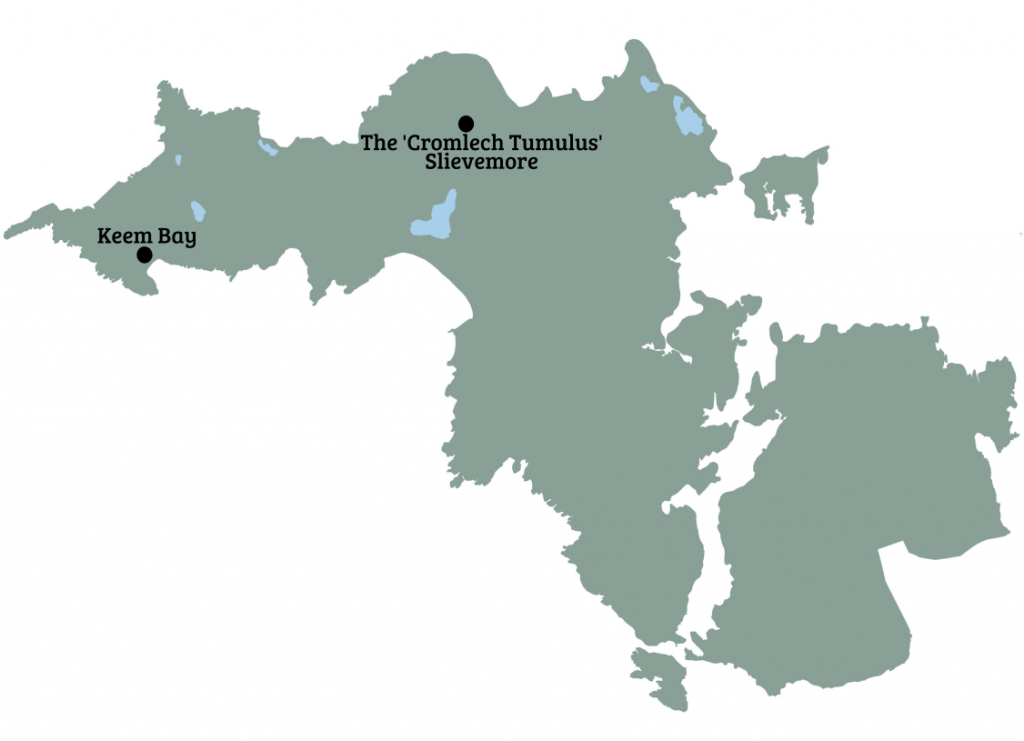 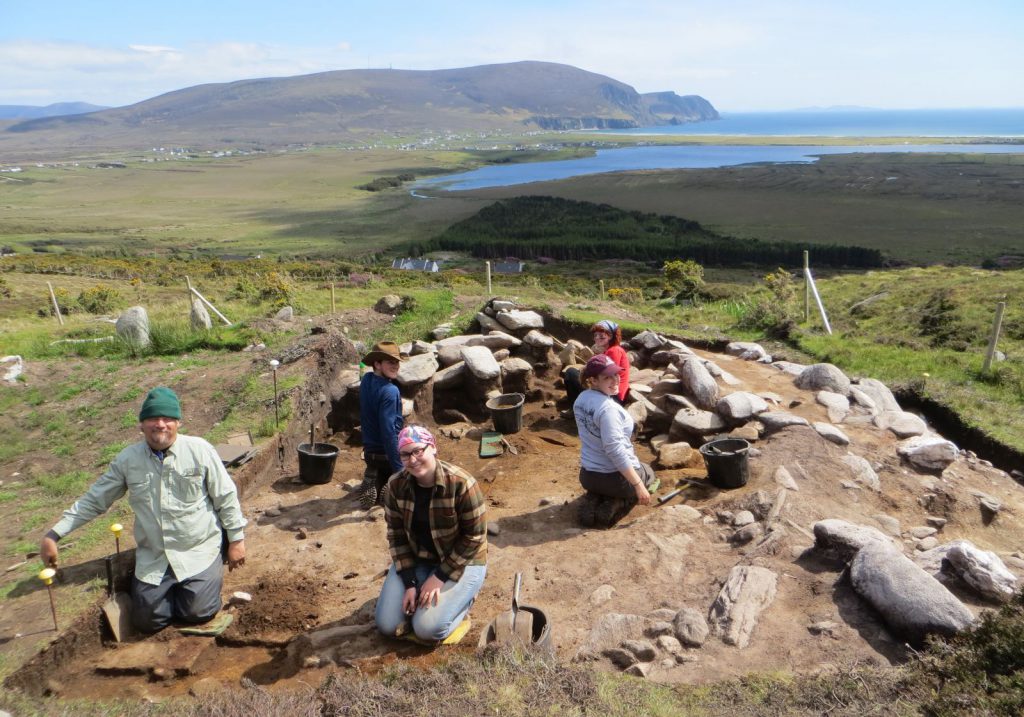 We are currently pursing two major research projects. The first is an investigation of the prehistoric landscapes of Slievemore Mountain in the north of Achill, while the second, is a historical archaeology of Keem Bay in the west of the island.

The Prehistoric Landscapes of Slievemore

Achill Archaeological Field School (AAFS) has been exploring and documenting the archaeology of Slievemore mountain since it was founded in 1991. Slievemore is the tallest mountain on Achill, standing at some 2204 feet high. Its northern slopes fall to the Atlantic Ocean in a series of rocky cliffs and battered coves, while to the south it slopes gently down to meet Keel Lough, with stunning views across the Minnaun cliffs and out to Clew Bay. These sunny south-facing slopes bear the evidence of over 5500 years of settlement, from the first Neolithic farmers, to early 20th century seasonal herders. AAFS first began its investigations at the 18th to 20th-century ‘Deserted Village’ at Slievemore, before extending its parameters to explore the rich prehistoric landscapes on the mountain. The prehistoric horizon is represented by a series of megalithic tombs, pre-bog walls, roundhouses and hut sites.

In 2006 the sod was turned on the first of three Early Bronze Age (EBA) roundhouses to be excavated by AAFS (Roundhouse 1). A second EBA building—Roundhouse 2—was excavated between 2009 and 2011. In 2014 we turned our attention to an enigmatic monument just under a mile east of Roundhouses 1 and 2. The monument—noted on the historic maps as the ‘Cromlech Tumulus’—was recorded by the Archaeological Survey of Ireland as a ‘megalithic structure’. It comprised an irregular oblong mound with orthostats protruding from the hill peat. For over 175 years scholars had argued over what exactly the monument was, with suggestions ranging from a prehistoric burial monument to a series of more recent huts. To complicate matters the ‘Cromlech Tumulus’ is linked to a nearby Neolithic court tomb by a linear pre-bog monument known as the ‘Danish Ditch’. The ‘Danish Ditch’, identified by local farmers in the early 19th century, travels c. 140m east from the ‘Cromlech Tumulus’ to meet the court tomb, before turning south and down the mountain.

We began the first of a multi-season investigation of the ‘Cromlech Tumulus’ and ‘Danish Ditch’ in 2014, returning in 2015, and 2016. We placed a large 16m by 12m trench over the ‘Cromlech Tumulus’, digging it slowly, quadrant by quadrant, and excavated a series of three long narrow cuttings over the ‘Danish Ditch’. Work at on this part of Slievemore so far has made a very substantial contribution to our understanding of the mountain, especially its development in the second millennium BCE. The ‘Cromlech Tumulus’ has been identified as another MBA roundhouse, overlain by a series of medieval and post-medieval huts, perhaps linked to seasonal grazing. The roundhouse is sub-circular in plan and defined by a substantial stone and earth wall, with an internal diameter of about 7.5m. The northern half of the interior has been fully excavated revealing a dense concentration of postholes and pits. Some of these can be interpreted as relating to the timber superstructure of the building, while others are likely to be storage pits or for domestic ritual depositions. The best evidence of the latter comes in the presence of a deposition of cremated bones (human?) in one pit and the discovery of a carved beach pebble that resembles a human face in another. The carved pebble has a pecked perforation that may represent eyes, with two smaller holes possibly indicating ears. An alternative interpretation is that the object is a loom weight. Excavation will continue at the roundhouse in 2017, with this season focusing on the eastern area of the structure where the entrance is thought to be.

The three narrow cuttings across the ‘Danish Ditch’ (2014–16) have confirmed the presence and course of this pre-bog linear feature as it runs between the roundhouse and the earlier court tomb. In 2016, we discovered that instead of a field wall, an initially thought, the monument seems to be a route way defined by two stone walls flanking a shallow terrace. The trench also contained an oval stone setting located mid-way between the two walls with evidence for burning. This finding is intriguing, and the area warrants further investigation. We will dig a fourth slot over the ‘Danish Ditch’ in 2017, and we may return in 2018 to open up a larger area across the monument.

The Keem Bay Project (2009-present) is an AAFS research strand focused on the fascinating post-medieval settlement at Keem Bay Achill Island. The project is making important contributions to our understanding of household and material culture in pre-Famine Mayo, as well as to the dating and character of rundale settlement in Ireland.

Keem is a sheltered valley on the western-most tip of Achill Island. The first-edition OS map (1838) shows a substantial clustered settlement of 40 buildings in the valley, surrounded by a large area of enclosed cultivation. Ethnographic and historical evidence suggests that Keem was a seasonally occupied settlement associated with transhumance, although the archaeological evidence is not so clear. Writing in 1839 Ceasar Otway, a Protestant clergyman from Tipperary, noted that Keem was:

‘only inhabited in summer …  the owners of the village  … have other houses in a distant part of the island, where they spend the winter and spring; thence they come when their oats and potatoes are planted and spend the summer months, herding their cattle on these heights, and leading a pastoral life (1839, 399-401).

This assertion was echoed by later ethnographic work undertaken by O’Kelly in the 1940s, who reported that Keem was a booley settlement used by the people of Slievemore (O Moghrain and O Duilearga 1943, 169).

In 2009 the AAFS began a programme of excavation at the site of the relict village of Keem with the aim of investigating the character of the settlement. The village was cleared in the 1850s, probably by Charles Cunningham Boycott, and little remains of the village today apart from a series of low grassy mounds. The footprint of about fourteen buildings can be discerned at the site. The 2009 excavation, directed by Theresa Bolger, targeted the largest footprint, Building 3. Bolger’s excavation was finished by Stuart Rathbone in 2015. Building 3 proved to be a small sub-rectangular dwelling with neatly constructed dry stone walls. It measured 8.75m by 4.7m externally and just 6.66m by 2.8m internally. It was divided into two compartments, separated by a stone lined cross drain, with a larger living compartment with a central hearth on one side and a smaller compartment on the other which was probably used to house animals. The building conforms to many of the characteristics of the classic byre dwelling with humans living at one end and animals at the other.

Prior to the excavation one of the big questions about the settlement at Keem Bay regarded how it should be interpreted, as the remains of a small permanently occupied village or as a large transhumant seasonally occupied booley village. The excavations at Building 3 have provided important information that relates to that question. Building 3 appears to be a permanently occupied dwelling, that conforms to descriptions of early 19th-century houses on Achill, and crucially the division of the building into a byre dwelling arrangement is not what would be expected from a house only occupied during the summer months when animals could happily be kept outside.

In 2016 work continued at Keem with the excavation of Building 4, a mounded footprint located immediately SW of Building 3.  Both buildings were orientated on the same NW-SE axis. Building 4 was an oblong structure defined by thick earth and sod walls revetted by dry-stone facing on the interior and exterior. It was 2.5m wide by 4.8m long internally. It had straight walls with noticeably rounded corners, both inside and out. The building had a diagonal drain that ran N-S across its NW end and exited at the door in the SW wall of the building. Most interesting the building had not one, but three hearths, that seem to have been used sequentially. This is perhaps the most significant finding from Building 4 and it suggests that the dwelling was occupied episodically, or that there was one or more reorganisations of the internal space. The artefacts from the building indicate a late 18th to early-19th century date, similar to Building 3.

Post-excavation analysis of both sites is ongoing. In 2017 we will return to Keem to excavate a third building in the settlement.