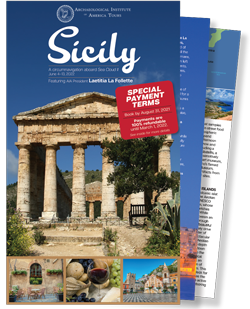 Join Archaeological Institute of America President Laetitia La Follette on a spring cruise circumnavigating Sicily aboard the luxurious, 47-cabin, three-masted barque Sea Cloud II. Begin and end on the island of Malta which, together with Sicily, has witnessed and bears the stamps of all the
major civilizations that the Mediterranean cradled: Phoenicians, Greeks, Romans, Arabs, Normans, Christians, Jews, Byzantines, and Muslims. Each civilization left important stylistic traces in major architectural, urban, and artistic monuments.

Begin in Valletta, the vibrant capital city of the island nation of Malta and one of the most concentrated historic areas in the world. Then embark Sea Cloud II for a splendid seven-night cruise circumnavigating Sicily. Explore the island’s treasures with stops in Trapani (for Segesta, and Erice or Marsala), Palermo, Giardini Naxos (for Taormina and Mt. Etna), and Syracuse. This itinerary also spends a day in the Aeolian Islands, one of seven UNESCO sites visited during this cruise, as well as a specially-timed sailing to enjoy up-close views of the still-active Stromboli volcano. Also available is an optional, post-trip extension on Malta and Gozo, with visits to remarkable Neolithic and medieval sites.

Your host vessel, the Sea Cloud II, offers excellent cruise accommodations while capturing the timeless elegance of sailing. To be on deck when the sails are fully extended is an unforgettable experience. Thus, this itinerary is planned to ensure ample sailing time to enjoy the majesty of this vessel and the thrill of sailing.

A robust educational program rounds out this outstanding journey. AIA lecturer and host Laetitia La Follette, Professor of Greek and Roman Art and Architecture, and Gary Radke, an expert on Italian medieval and Renaissance art and architecture, will offer a series of illustrated lectures and informal discussions along the way.