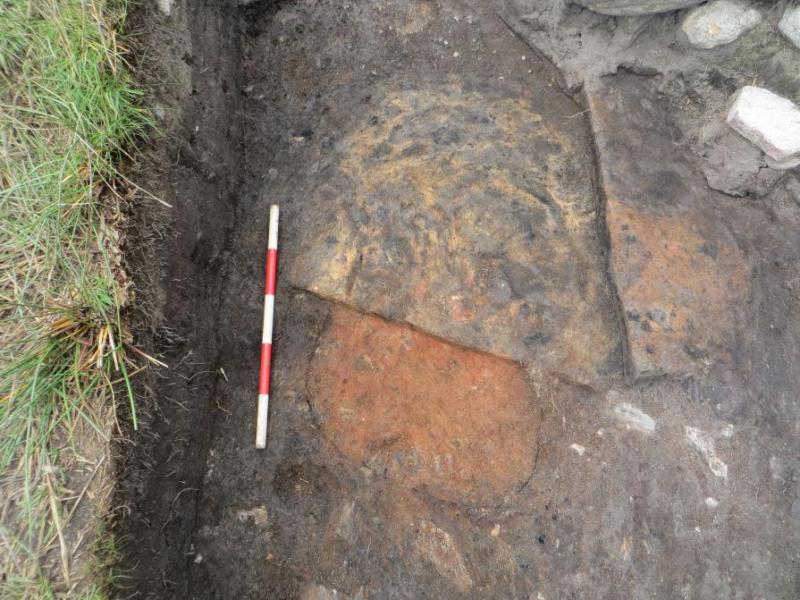 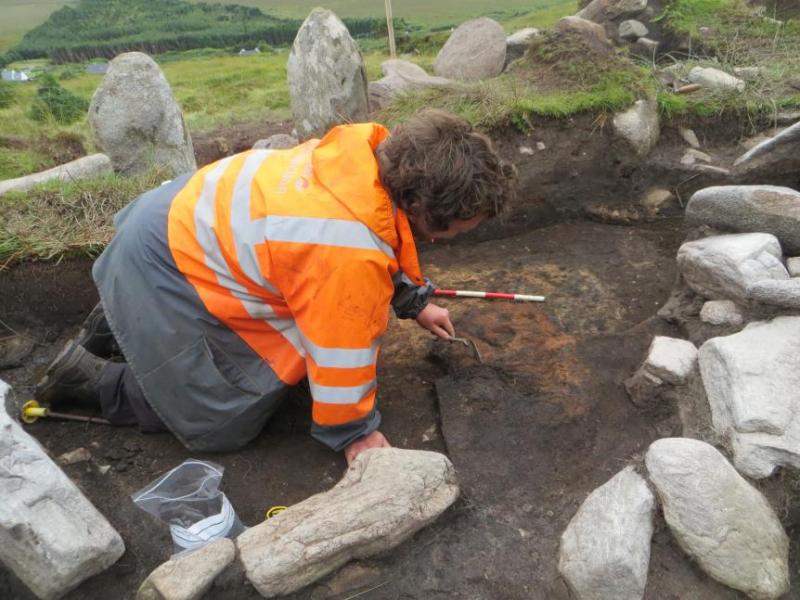 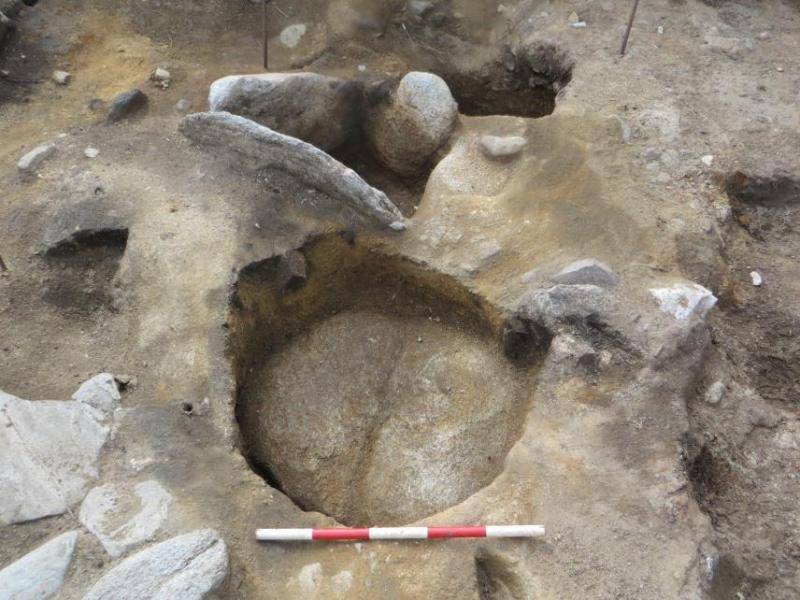 With just a week to go before our season of excavations start, it is quite a frantic time at Achill Archaeological Field School. We like our courses to run as smoothly as possible, so good preparation is essential. Unfortunately I don’t think an update detailing how I’ve been searching through our equipment store to make sure I know where all our equipment is, or searching through the computer archive to make sure I know where all of the files are would make for a particularly interesting read. It was therefore rather fortunate that the long awaited first batch of radiocarbon dates from the Cromlech Tumulus site that was partially excavated in 2014 have just been sent to us, and we therefore do have exciting news to share after all!

At the end of the 2014 season two samples were selected for submission to the Chrono Lab at Queens University Belfast. After careful consideration two samples were identified that would offer really useful dates regarding the overall sequence of activity at the site. The first sample came from the middle hearth inside the ovoid or sub rectangular building that overlay the southern interior of the enclosure (This area is described in the 2014 entry for Week 13). The hearth was part of a sequence of three directly overlying hearths and it had produced the most promising quantity of charcoal when the samples were processed. We may at some point attempt to acquire dates from the other two hearths, but that is a decision we will have to look at in detail when the excavations are completed and we are choosing where to allocate our resources. What we knew about the hearth was that it was part of a sequence of secondary occupation on the site, which had been built over the top of the earlier enclosure. The hearths were set in the middle of a rather crudely built structure that had reused the two orthostats that formed part of an original entrance into that enclosure. When this building had gone out of use an even smaller circular building had been constructed over its western end. It was clear that the ovoid building post-dated the occupation of the enclosure by a reasonable length of time because there was a considerable build-up of soil overlying the occupation deposits associated with the enclosure and underlying the foundations of the ovoid building. What we did not know was when this building had been built and how long this had happened after the enclosure had fallen out of use.

The charcoal sample from the hearth has been dated to AD1605 with an error range of around ± 30 years, placing the use of this building in the late sixteenth century or the early seventeenth century. As it happens, this is a really interesting result as the rural buildings of the early post Medieval period are not particularly well understood, especially in the west of Ireland. What we know from eighteenth and nineteenth century historical records is that throughout those later centuries the design of rural buildings was evolving rapidly. Whilst we have copious amounts of nineteenth century buildings surviving as very emotive ruins, it is simply not possible to project those designs backwards in time and therefore we have only very limited evidence for the nature of fifteenth and sixteenth century buildings. My initial feeling is that this building is too isolated and at too high an elevation i.e. 110m OD on the mountain to represent a permanent farmstead; what we may have found is an early example of a transhumant ‘booley house’, essentially a herder’s or shepherd’s hut used only during the summer months. Such ‘booley houses’ are a very prominent part of the later archaeological landscape of Achill so it would be very exciting indeed if further research can confirm this function for this much earlier building.

The second sample that has been dated is from one of the pits within the enclosure. The pit in question was the large circular pit that contained a large flat circular stone slab (also detailed in the 2014 entry for Week Thirteen). The sample came from a thin layer of charcoal rich soil sandwiched between the base of the pit and the base of the circular stone, making it an excellent sealed and in situ deposit to date. The pit is only one of a large number of features discovered within the enclosure; clearly there was a prolonged period of activity and many more C14 dates will be needed before we can present an accurate account of the entire sequence. Whilst we don’t know where this pit fits into that detailed chronology, we can be certain that the pit was part of that phase of activity because it was sealed beneath the post abandonment soil that has already been mentioned. In effect then the sample is from a twice sealed context, and you can’t get more secure than that!

The second sample has returned a date of 1042 BC, again with an error range of around ± 30 years (aren’t modern AMS dates marvellous!), placing the use of the enclosure towards the end of the Middle Bronze Age period. Significantly, this is several hundred years after the occupation of the large Middle Bronze Age roundhouses Achill Archaeological Field School investigated between 2006 and 2010 (Described in the 2014 entry for Week 18), and around two and a half thousand years after the use of the nearby megalithic tombs which belong to the Early Neolithic period. This result is really interesting as it fills a substantial blank in the occupation and use of the Slievemore landscape. The result also has some important implications for how we proceed with the field work during this season, which we will be carefully considering this week. Establishing the relationship between the Cromlech Tumulus and the Danish Ditch pre bog field wall is now a matter of upmost importance, as is determining the overall shape of the enclosure.

These two radiocarbon dates have provided answers to several of the research questions established at the start of this project. We cannot as yet entirely rule out a Neolithic phase of activity at the site because there is much still to discover about the eastern part of the site. However with these two dates we feel that at the beginning of the second season of excavation we have already gone a long way into resolving the nature of this curious site and the excavations over the next seven weeks will hopefully allow us to complete the story of the Cromlech Tumulus.