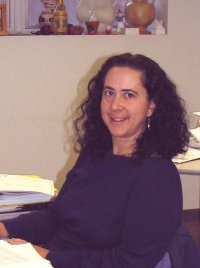 Alexandra Carpino is Professor of Art History with the Department of Comparative Cultural Studies at Northern Arizona University, and holds her degrees from the University of Iowa (Ph.D.) and Bryn Mawr College.  Her area of specialization is Etruscan art and culture, particularly the art of Etruscan mirrors, and she was the AIA’s Cinelli Lecturer for 2012/2013.

Not a Taboo: Maternal Undress in Etruscan Mirror Iconography

Normative concepts about gender were communicated in the Etruscan domestic sphere, specifically in aristocratic households, through narratives that decorated the reverses of engraved bronze mirrors. These artifacts were more than just expensive luxury items and grooming implements; rather, they also functioned as a form of communication in the private sphere, thereby providing scholars with a critical body of evidence about the elite’s gender ideologies, social expectations and cultural values. Exercising agency, engravers and their patrons gravitated toward stories from the Hellenic repertoire that were relevant both to their lives and the ideologies that underscored the cornerstones of aristocratic Etruscan society. In this lecture, I focus on scenes that communicated elite expectations about motherhood, a subject popular in mirror iconography from the fifth through third centuries BCE. Two themes prevail, one proclaiming the intimate bond between mothers and their children during life and/or in the aftermath of tragedy, and the second focusing on moments rife with hostility and violence, where mothers exhibit behaviors that transgress established ideals. By comparing and contrasting these narratives – all directed to an educated clientele – we can better understand the different types of exempla offered up for reflection on a daily basis. More specifically, the representations from the fourth century reveal a particular focus on procreative women who had given birth to male children, thereby highlighting the centrality of the male line in contemporary families’ ancestries and lineages. Through this privileging of boys over girls, mirror iconography exposes the gender stereotypes in circulation at this time.

The seminal work of Larissa Bonfante established that nudity not only signified a wide range of concepts in Etruscan iconography – from eroticism, marriage and vulnerability to an individual’s social status and/or cultural identity – but also that it was equally prevalent for both males and females. The largest body of nude representations of girls and women in Etruscan art appears in the scenes found on the reverses of engraved bronze mirrors, especially artifacts produced during the fourth and third centuries BCE that illustrate bathers, lovers or the different processes associated with adornment. A more surprising aspect of this iconography is the consistent depiction of either fully unclothed or partially-dressed mothers with their grown children on a group of exceptionally large and aesthetically rich tang mirrors produced in central and northern Italy between the late fourth and early third centuries BCE. Created not only as a form of visual communication in the domestic sphere but also as artifacts that mediated between the worlds of women and men, the unmarried and the married, and the living and the dead, these mirrors project a pictorial tradition with a strong ideological – rather than realistic – power and social influence. In this lecture, I consider the visual rhetoric communicated by the juxtaposition of the exposed bodies of mythological mothers such Letun, Semla, Thesan and Thethis with the clothed, semi-nude and/or nude depictions of their grown children, mainly sons. A close sense of intimacy, rather than eroticism, is projected through the embraces that many of these pairs share. In addition, despite their status as established rather than soon-to-be mothers, the bodies on display emphasize youth and fitness rather than middle age, evoking the forms used for brides and/or divinities connected with marriage on contemporary mirrors. In this context, it is possible to see undress as a socially-relevant costume that not only conflated themes such as fertility, procreation and nurturing but also contributed to the creation of a maternal ideal not previously acknowledged in Etruscan art.

Etruscan artists used different types of violent imagery as a form of visual communication in a variety of contexts. Well-known and frequently-illustrated examples include the relief sculpture from Temple A at Pyrgi its graphic depiction of scenes from the Seven Against Thebes epic, wall paintings from the Tomb of the Augurs (Tarquinia) and the François Tomb (Vulci) and the narratives found on numerous sarcophagi and urns produced from the fourth century on. In the scholarly literature, these representations are frequently described as not only peculiarly Etruscan (as opposed to Greek) in taste but also as indicative of an unusual appetite for “savagery and its depiction,” gore, cruelty, and “horrific moments.” These views, however, are inaccurate, reflecting oft-repeated but incorrect assumptions about the number and range of violent images in Etruscan art; they also conform to a cultural bias that fails to acknowledge the prevalence and use of similar imagery in works of art from the Greek world. In this lecture, I consider the types of violent imagery that appear in three different contexts in Etruria – the sanctuary, the tomb, and the home – without recourse to modern prejudices. I discuss how the selected scenes not only relate to their specific locations and contexts, but also to the ideologies of their consumers, the elite men and women who commissioned and paid for them, and for whom they had a strong emotional resonance. Even if we cannot grasp completely the multiple messages communicated by the different types of graphic imagery found in Etruria – which range from scenes of murder and human sacrifice to dismemberments and suicide – the conscious and deliberate choice to portray it cannot be divorced from local values and beliefs.  In addition, I will talk about how the “dark” stories selected for portrayal in these different contexts effectively brought to the fore, in vivid and dramatic ways, the various types of problems and tensions that could arise in families, between couples, or when mortals challenged the gods.

See Alexandra Carpino's work in the American Journal of Archaeology.