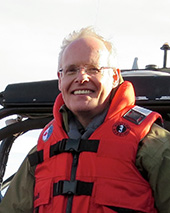 Robert W. Park is Professor and Acting/Interim Chair with the Department of Anthropology at the University of Waterloo. Professor Park has received his Ph.D., M.A., and B.A. in Anthropology from the University of Alberta, McMaster University, and the University of Toronto respectively. Professor Park was awarded the UW Outstanding Performance Award in 2007, 2010, and 2020. He has published extensively, including his Ancient Stone Tools of Nunavut: An Illustrated Guide (1999), and as co-author of “A Franklin Expedition Officer’s Burial at Two Grave Bay, King William Island, Nunavut” (Journal of Archaeological Science Reports, 2021); he has given several CBC interviews on the discovery of the Franklin Expedition ships.  Professor Park is the AIA Bass Lecturer for 2021/2022.

For centuries the challenge of finding a navigable sailing route through the Canadian Arctic drew European explorers into that daunting region, culminating in 1845 with Sir John Franklin’s third expedition: two ships and 129 sailors. Two years later, in May, 1847 they reported “All well” but less than a year after that, on 22 April 1848, the 105 survivors departed their frozen ships in a desperate effort to escape the Arctic. All would die in the attempt. Almost continuously since then, people have been attempting to understand why and how this unprecedented disaster occurred. This presentation will describe how recent archaeological investigations, informed by testimony from the Inuit people of the region, located the last remains of Franklin’s expedition and are shedding new light on this 170-year-old mystery.