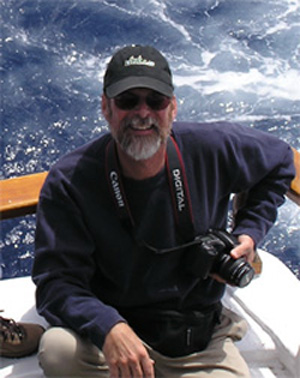 Bill Murray was born in State College, Pennsylvania, and grew up as a “townie,” next to Penn State University, where his father was head of the History Department. In the 1960s, Murray’s parents bought a 30-foot sloop and spent summers in the Virgin Islands living aboard with their three kids. Murray learned how to dive, saw first-hand the influence of the sea over those who live along its shores, and faced shipwreck more than once. When he went to Penn State, and then Penn, he became captivated by Greek and Roman culture and decided to move to Greece to study ancient port cities for his Ph.D. dissertation. Ever since learning of the discovery of a complete warship ram just south of Haifa in November 1980, Murray has been obsessed with extracting evidence from the weapon to understand ancient galley warfare.  He is now is the Mary and Gus Stathis Professor of Greek History and the Director of the Ancient Studies Center at the University of South Florida, and recent publications include The Age of Titans (2012, Oxford University Press).  Professor Murray is a past AIA Norton Lecturer, was the 2013/2014 AIA Bass Lecturer, and is a 2020/2021 AIA Joukowsky Lecturer.

Toward the end of the First Punic War (264-241 B.C.), the Romans made a final effort to gain control of Western Sicily. They built new ships to make up for the losses of previous years and redoubled their efforts to gain control of Carthaginian strongholds, which they placed under siege. In response, the Carthaginians outfitted a relief fleet of warships and transports, which they loaded with supplies. On 10 March, 241 B.C., the Roman fleet destroyed this relief force as it sailed in from the west in what proved to be the last sea battle of the First Punic War.

Guided by a fisherman’s recovery of a single bronze warship ram, the Sicilian Soprintendenza del Mare initiated a joint underwater project with RPM Nautical Foundation in 2005 and, together, they found the ancient debris field of the battle—the first ever discovered from an ancient sea battle. After two decades of research, only a portion of the full battle zone has been discovered and mapped. Rich in finds (23 bronze rams, 30+ helmets, multiple sword concretions, hundreds of amphoras destined for the troops ashore, etc.), this site allows us to attempt what has never before been possible, the analysis of an actual sea battle with reference to both historical texts and physical evidence. Guided by this goal, the lecture will detail the stages of a typical naval battle before introducing the peculiarities and problems posed by the new Egadi evidence.

J.G. Royal and S. Tusa, eds., The Site of the Battle of the Aegates Islands at the End of the First Punic War (“L’Erma” di Bretschneider, 2019).

In 31 BC, Octavian defeated Antony and Cleopatra in a naval battle off Cape Actium in Western Greece. A few years later, the victor constructed on the site of his personal camp a grand Victory Monument to commemorate the event. I first visited this site in 1978, and since then, have been trying to explain what I found there: the ruins of a massive rostral display whose complex details preserve evidence for the sizes of Antony’s and Cleopatra’s largest warships. After a brief attempt to find battle debris in the sea off Cape Actium, I was asked by Dr. Konstantinos Zachos to join his team in analyzing the results of his systematic excavations of the site. His work, conducted over a quarter century, has added much to our knowledge of this important monument—its original design, its elaborately decorated altar, its dedication text, and its period of use. At the same time, emerging 3D technologies have allowed me to comprehend the rostral display more fully, to visualize the monstrous sizes of the ships that fought in the final naval battle, and to restore the text of the dedication inscription. In this lecture, I will summarize the main results of our research, but do so in a personal manner, in the context of my own 40-year journey of discovery in search of the Battle of Actium.

Octavian’s Campsite Memorial for the Actian War [under the authority of P.M. Petsas], Vol. 79, part 4 of Transactions of the American Philosophical Society (Philadelphia, 1989).

“Augustus’s Victory Monument, 3D Modeling, and New Directions for Warship Research,” in Speira (a Festschrift in honor of A. Douzougli and K. Zachos), E. Mermēgka, ed., Greek Ministry of Culture and Athletics (Athens, 2017), 469-78.

“Reconsidering the Battle of Actium—Again,” in Oikistes: Studies in Constitutions, Colonies, and Military Power in the Ancient World, Offered in Honor of A. J. Graham, E. Robinson and V. Gorman, eds. (Leiden: Brill, 2002), 339-60.