Looking Ahead to 2016: The Cromlech Tumulus 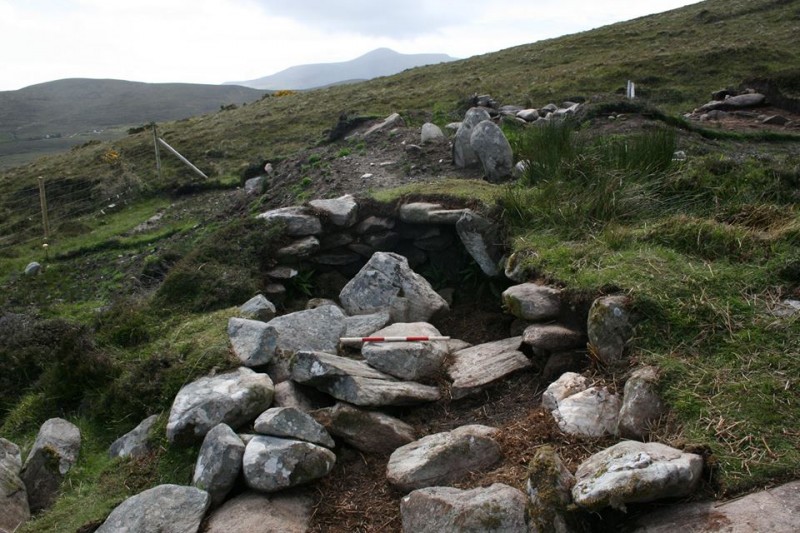 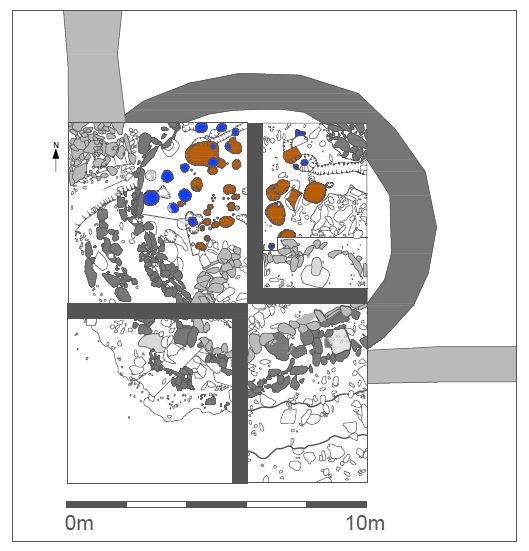 The 2015 season at the Cromlech Tumulus was very successful. Work concentrated on Quadrant 3 at the north west of the site, completing the investigation of the entire western half of the Cromlech Tumulus. We have now firmly established the nature of the archaeology that we have so far examined and made a considerable amount of progress towards our aim of understanding the function and chronology of the site.

The western part of the site contains two main phases of activity. The initial period of activity at the site revolved around the construction and prolonged occupation of a large oval shaped building during the Middle Bronze Age period. The building is similar in size to the two Middle Bronze Age Roundhouses that Achill Field School had previously excavated on Slievemore, which are located almost 2km to the west. However there are some important differences between this building and the two Roundhouses. Firstly the construction of the perimeter wall is quite different, the use of stone facing to retain a thick core of earth is quite different to the regularly coursed dry stone walls utilised at the Roundhouses. Secondly the entrance is located at the south/south east of the building, rather than at the east/south east, and instead of it being a long stone-lined passage it appears to be a simple gap in the wall flanked by two large orthostats. It is worth noting that although the overall layout is different the entrance passage of Roundhouse 1 also terminated at two large orthostats. The third major difference is that the interior of the building contained a tremendous number of pits and post-holes. Whilst the interior areas of Roundhouses 1 and 2 both contained pits and postholes they were not in the profusion found at this site. At the very least this strongly suggests a longer and more complicated period of occupation, but it may potentially also relate to a difference in function. Finally whilst the finds assemblage from the Roundhouses and this building at the Cromlech Tumulus site are largely similar, consisting mainly of small lithic flakes, diminutive lithic tools, hammerstones and rounded pebbles of currently unknown purpose, the building at the Cromlech Tumulus site also produced two sherds of Bronze Age pottery and, of course, the small carved stone head (Slievemore Man). Again it is not clear whether this relates to a functional difference or simply that there was a longer period of occupation that led to more occasions for artefacts to be deposited in recoverable contexts.

The second phase of the activity at the sites relates to a pair of small huts that were built over the ruins of the large Middle Bronze Age building at the Cromlech Tumulus site. The earlier of these structures was a small oval building defined by a simple stone foundation, which reused the pair of orthostats from the underlying building as its entrance. The building measured 6.1m E-W and 3.6m N-S externally. A series of three overlying hearths were found in the centre of this small structure and a Radiocarbon date of 1435 -1618 AD was obtained from the middle hearth in the sequence. This date spans the Late Medieval period and the very start of the Post Medieval period which is a very interesting result given the general dearth of low status rural buildings known from this period in Ireland. Additionally Achill Archaeological Field School has already recorded two similar buildings elsewhere on Slievemore, which whilst currently undated overlay well dated Early Medieval buildings and so potentially these may be of a similar date to the structure at the Cromlech Tumulus. The function of this small oval building is difficult to ascertain but certainly it would conform to the size range expected from transhumant seasonally occupied Booley Houses, and this is an exciting possibility we are currently exploring. The oval building was in turn overlain by a smaller circular building defined by a simple turf-bank that probably dates to the Post Medieval period. This building had an external diameter of just 2.85m and certainly could not have been any sort of full time residence. Whether it represents a much smaller Booley house, an emergency shelter or some sort of agricultural structure has yet to be determined, but this is a subject that we are actively investigating at present. Plan of the Cromlech Tumulus site with the completed western area in light green and the eastern area that will be excavated in 2016 in light red. The possible continuation of the building wall can be seen I the top right corner of the red area.

With work at the western part of the site completed it is now time to turn to the eastern part of the site, and this will be the focus of the first half of the 2016 season, during May and June (Achill Field School Modules, 1, 3 and 5). The plan is to excavate a single large trench along the eastern edge of the site measuring 12m by 6m. There are three main features in this area that we hope to examine.

Undoubtedly the excavations will also throw up some surprises that we could not have predicted, and even at this stage there are faint suggestions of at least two other structural elements within the area that will be explored by the new trench/s. In addition to the main trench at the eastern side of the site we also have two small trenches to excavate over the Danish Ditch pre bog field wall, one a short distance to the east of the Cromlech Tumulus site and the other a short distance to the west of the Neolithic Court Tomb. Two trenches have already been excavated over this feature and these new trenches will complete our investigation of this important pre-bog field wall.