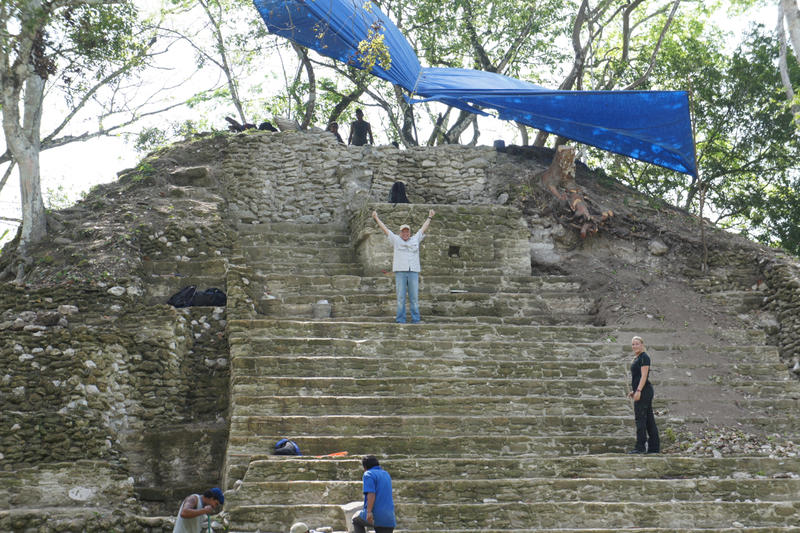 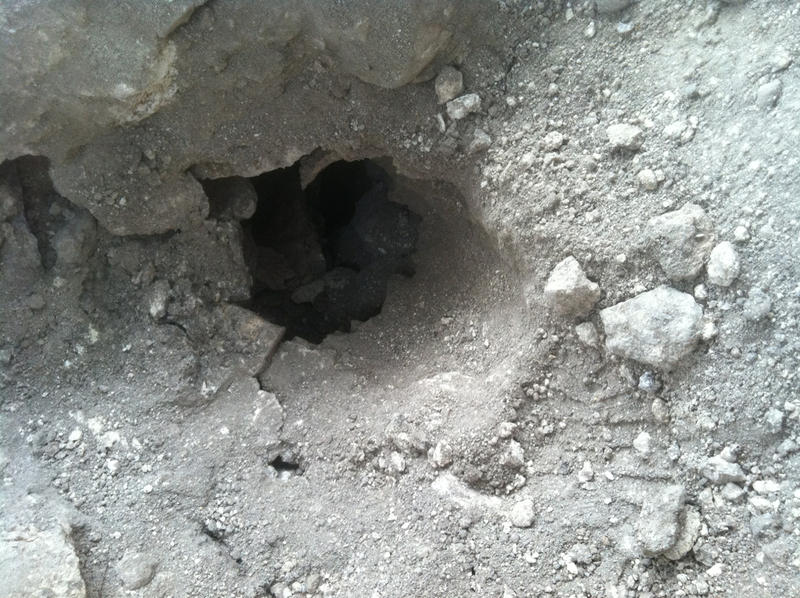 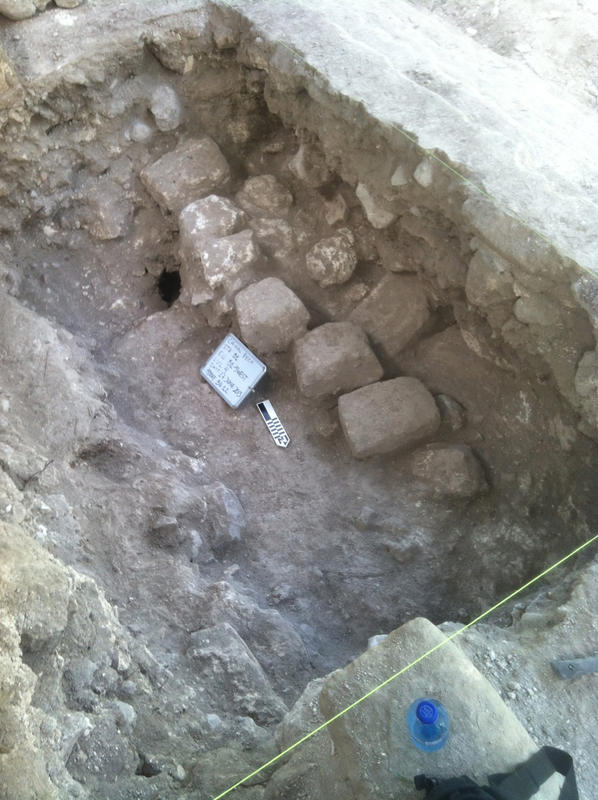 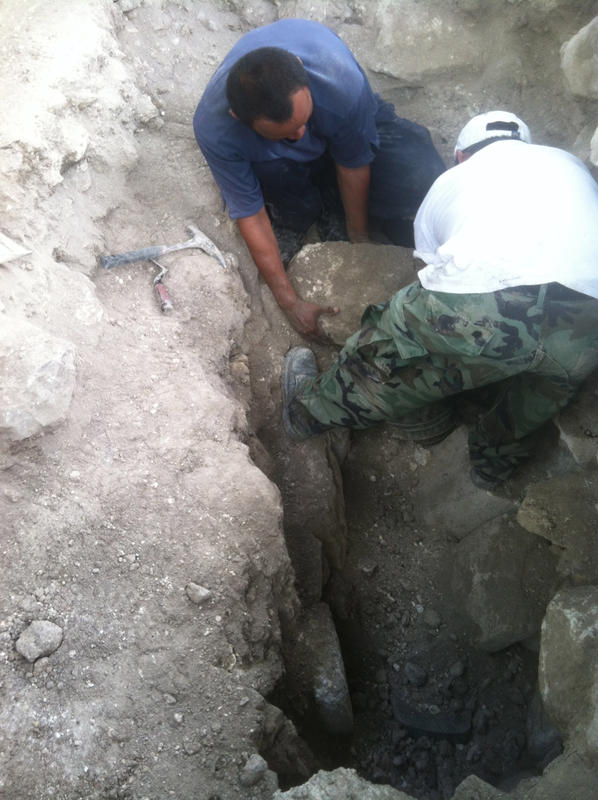 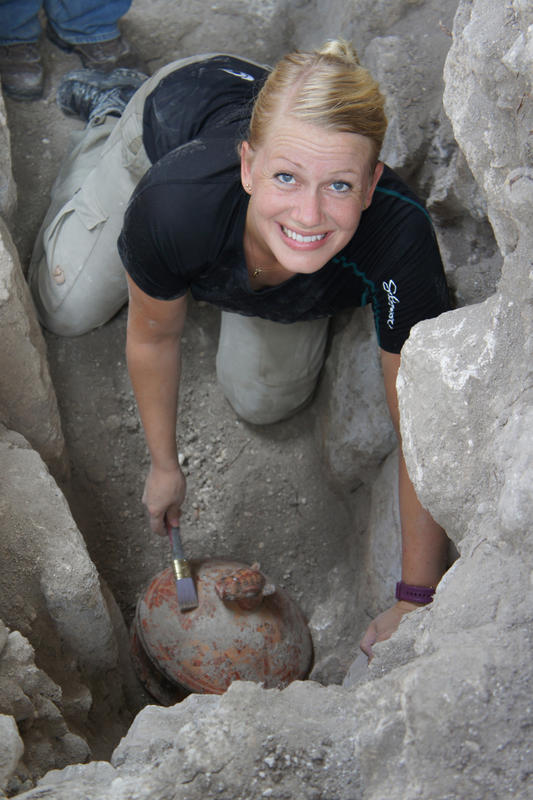 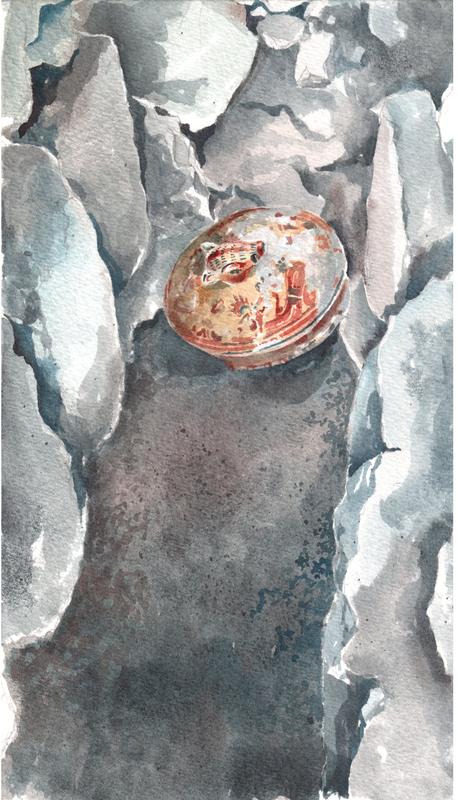 For this field season, our primary goal was to expose any burials below the terminal phase architecture on pyramid B1 on the E-structure at Cahal Pech, a local site in San Ignacio, Belize. Last year, we uncovered two burials on structure B1. Dr. Jaime Awe, the head of archaeology of Belize, and other archaeologists managing the project believe there are additional burials below the stair block of B1 as that was a common place for royalty to be buried in Maya pyramids.

On Tuesday afternoon, we began excavations below the terminal phase on E.U (Excavation Unit) B1-5 West through last year’s restoration. This was the first day on the quest to finding new burials. The first level had already been excavated, so we began our excavations on the plaster floor of level two, working our way down to the third level. We found many pieces of broken ceramics, some chert, and a few freshwater shells.

On Wednesday morning, we continued our excavations on EU B1-5 West. Our primary goal for the morning was to reach the next floor and find level three. Two-and-a-half hours later, we finally breached level three. The top of the level had a plaster floor with some large boulders. Other than the regular ceramics, chert, and freshwater shells, one unique artifact we found was the spout of a Maya chocolate drinking pot. Once level three was fully exposed, we began to excavate further down EU B1-5 West to reach level four. On the top of level four, we found what looked like three capstones. Through one of the ends of the southernmost capstone, we found a small hole, which measured about 90cm in length. We had found ourselves a tomb! While looking into the void with a flashlight, it was easy to see that this was a burial. We identified this new burial as BU 12 (Burial Unit 12). This was the 12th burial found on structure B1 at Cahal Pech. Unfortunately, the burial was found late in the day, so we would have to wait until early in the morning to begin excavations on it.  The tomb had guards around it all night to insure there would be no harm done by looters.

We arrived on site at 6:30 AM on Thursday morning and were quickly welcomed by the men, wearing all camouflage burial was found late in the day, so we would have to wait till early in the morning to begin excavations on it flage and equipped with only machetes, who were guarding the tomb the previous night. We quickly begin excavating the tomb. Our first order of business in the morning was to remove all of the collapsed and uncollapsed capstones on top of BU 12 so we could open the tomb. While removing the northernmost capstone, we spotted the head of a well-preserved ceramic vessel. At about 11:30 AM, we finally removed all of the capstones above BU 12 on level four. This was a very stressful moment for us. If we were to make a mistake while removing the capstones and drop one, all artifacts in the tomb would be lost forever. It was especially risky because the capstone had already partially caved in over time so they were not secure and could fall with the slightest movement of the material around them.

On the southern end of the burial, we uncovered what seemed to be a cranium of a person. From what we could see, the skull was crushed and the individual was buried face down, creating the possibility that additional artifacts might be found under the person. We were very eager to excavate below to see what artifacts we could find. The ceramic vessel on the northern end of the burial still partially uncovered remained a mystery; however, it looked like the head on top of the vessel was either an armadillo or a jaguar.

At the end of the day, we finished uncovering the ceramic vessel and removed it from the tomb. Rather than an armadillo or a jaguar head, it turned out to be the head of a peccary, a native pig-like mammal of Central America.  Based on the design of the vessel, it was clear it came from the Early Classic Period (300-600 A.D). What was rare and unusual about this ceramic vessel was that the peccary body was not included on the body of the vessel. Usually when you have an animal head on the lid of a vessel, it is included on the body of the vessel as well. On the northern end of BU 12, we found a round ceramic object, as well as an earspool, both of which that were removed from the tomb. In burials of the Maya, earspools are very common.

On the vessel, there was a depiction of a captive person. It is unknown if this figure is a real person of the Maya or a mythological figure. This is the third vessel at Cahal Pech with this depiction included on it. This same captive individual is on a few other vessels across other Maya sites in Belize, including Dos Hombres in the northern region of Belize. The bottom of the vessel was ring based, and the inside of the vessel had a red-orange colored glaze on it. The inside of the vessel had a matrix in it, but the exact content of the matrix is still unknown.

After removal of the ceramics, we turned the excavations over to three osteologists for careful removal of the human remains. Once they have completed their work, we will continue to excavate further down, in search of new burials!

Cahal Pech Structures B6 and B7: Week Two

Read about what was uncovered in Week 2!

Cahal Pech Structures B6 and B7: Week Three

Updates from week 3 of excavation.

Field notes from the first week of excavation in 2013 at Cahal Pech.

For this field season, our primary goal was to expose any burials below the terminal phase architecture on pyramid B1 on the E-structure at Cahal Pech, a local site in San Ignacio, Belize.