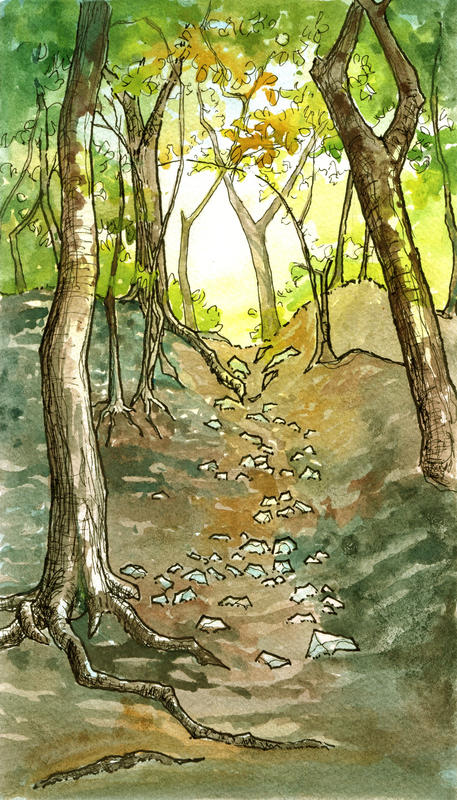 We began work on Structures B6/B7 by opening seven excavation units. Lining up from the west to the east, six units were established laterally in dimensions of 8 m by 5 m, and a final seventh unit was established on the far east of the structure, measuring 4 m by 5 m. The units were established in a fashion that we hoped would capture the terminal phase of architecture.

Each unit consisted of roughly two supervisors, five to six students, and one field archaeologist provided by the Belizian Institute of Archaeology. The plan will be to pull roughly three students off daily to assist in excavations atop Structure B1.

Despite the large amount of trees and collapse covering each unit, each unit began excavations by penetrating the southern extreme of the unit in hope of finding plaster flooring. Once the floors are discovered, we will move northward toward the expected structure walls and stairs. Before excavations could begin, all seven units recorded opening elevations. Opening photos were also were also taken of each unit by the project photographer, Finleigh Goyette.

The purpose of our excavations is to expose the terminal phase of architecture of Structures B6/B7. We also hope to define the boundaries between Structures B6 and B7.

No architecture was found today but Unit 1 managed to expose a small amount of plaster floor on the southeast corner of the unit. Tomorrow we will continue to follow the known plaster floor found in Unit 1 northward and also try to expose other floors in the other six units.

Excavations continued within all of the units. Each of the teams carried on with the removal of humus in order to reveal collapse and also continued to seek the plaster floor at the southern end of the units. Unit 1 continued to expand the floor that they uncovered yesterday. Early in the morning, our team discovered the first sign of a plaster floor in the southeast corner of Unit 7, giving us two known examples of floor on the extreme sides of the structure. While continuing excavations northward on the floor north of Unit 1, the team found an assemblage of stones. We believe at this time, that this may be the first sign of stairs on Structure B6. Many artifacts were discovered today including copious amounts of ceramics and chert, as well as some freshwater shells. Units 2 and 3 also managed to find obsidian blade fragments and one piece of quartz in the collapse. Although these were very special finds, their discovery in the collapse renders most contextual information unreliable.

All units continued excavating toward the north. The team from Unit 1 discovered a second layer of plaster floor just north of the first floor found two days earlier. The second floor was found 5 cm above the earlier one, proving that the floor discovered earlier was from an earlier phase of construction. By midday, plaster floors were found in all seven units but the quality of their preservation varied greatly, ranging from smooth and hard plaster to rough and crumbling ballast. Elevations were taken on the floors found in Units 1, 2, and 3. All measurements were found to be fairly consistent, leading us to believe that they were one continuous floor. The assemblage of stones that was found in Unit 1 yesterday proved to be collapse and it was removed. This puts us back to square one in regards to architecture.

Cahal Pech Structures B6 and B7: Week Two

Read about what was uncovered in Week 2!

Cahal Pech Structures B6 and B7: Week Three

Updates from week 3 of excavation.

Field notes from the first week of excavation in 2013 at Cahal Pech.

For this field season, our primary goal was to expose any burials below the terminal phase architecture on pyramid B1 on the E-structure at Cahal Pech, a local site in San Ignacio, Belize.