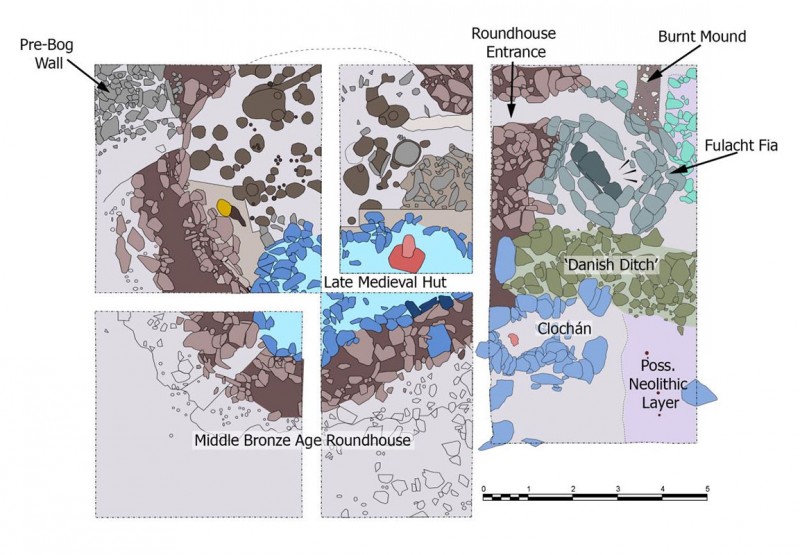 Fulacht Fia (Burnt mounds) represent an archaeological site whose defining characteristic is large quantities of heat shattered stone. The term fulacht fia is found in the early Irish literature from at least the 9th century AD (Waddell 1998, 174) and refers to open-air cooking places that consist of a water filled pit in which to cook meat. They generally consist of three elements, a mound of stones, a hearth used to heat the stones, and a trough, often lined with wood or stone, which was filled with water and into which the heated stones were placed to warm the water. Extant burnt mound sites are recognised as low grassy mounds which can be circular or crescent shape. They commonly date to the Bronze Age, although examples from the Neolithic period are known.

The Achill fulacht fia was found at an elevation 110 m asl, abutting a Middle Bronze Age Round House and enclosure in Keel East townland on Achill Island, Co, Mayo. It comprised a stonelined trough orientated north-west/south-east and measured 1.80m long by 1.01m wide and 0.50m deep. The southwest side of the trough was built from two vertically placed slabs. It also had upright slabs defining its short southeast and northwest ends. The northeast side of the trough was formed a slightly curving wall of four large orthostats measuring 2.90m long and with a maximum height of 1.25m. A deposit of packing material was found around the base of the orthostats. The stone-lined trough was flanked on its southwest and southeast sides by an Lshaped narrow stone ledge/platform. The platform was between 0.37m and 0.57m wide and was composed of four large flat slabs and seems to have served to give access to the trough.

The fulacht fia trough and platform were surrounded by a sub-rectangular enclosure of variable height. The northwest part of the enclosure was formed by a stretch of drystone wall built between two orthostats. These two distinctive stones seem to form a pair, and while it is difficult to be sure, they may have originally been part of the roundhouse entrance.

Fulacht fia sites are usually found in lowland locations, close to water. Finding a fulacht fia at such a high elevation is unusual and may indicate a usage other than cooking!