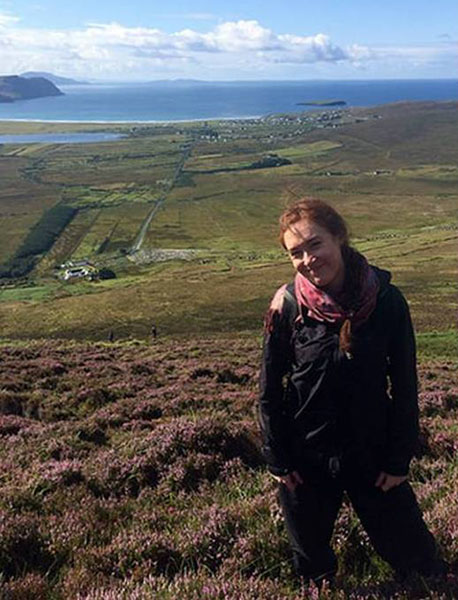 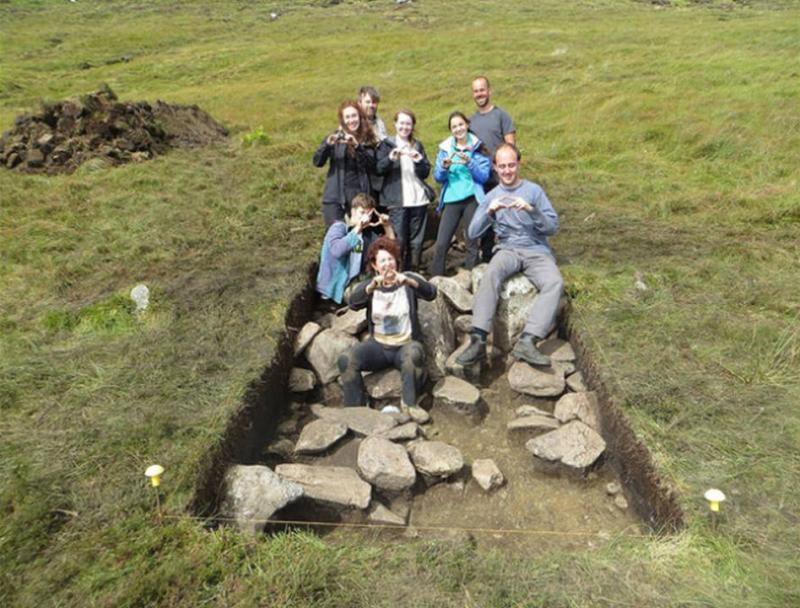 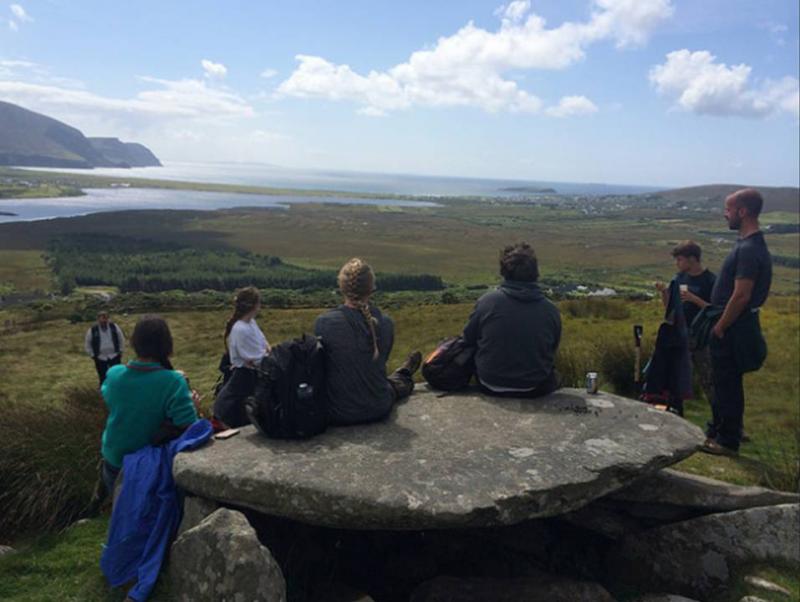 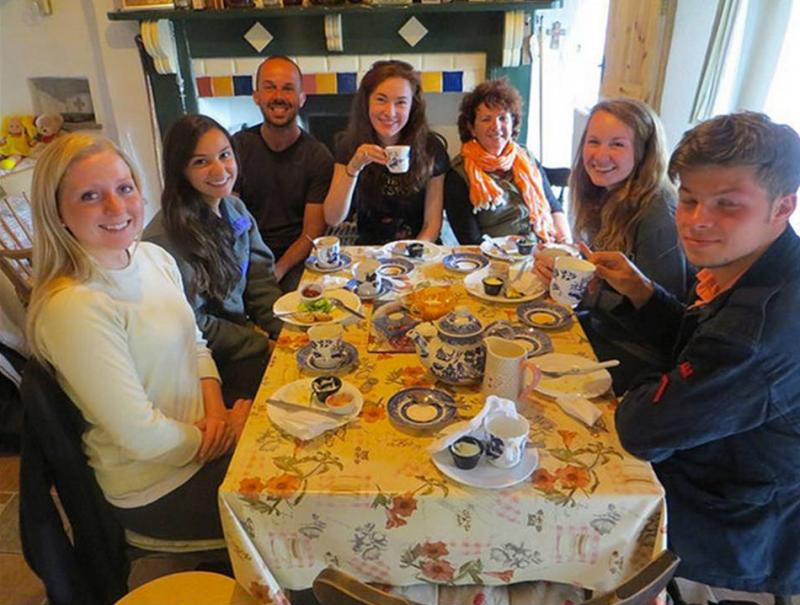 Hi, I’m Jordan, currently living in Chicago, Illinois and working at Northwestern University’s Knight Lab. I have a minor in Anthropology from Arizona State University, and have always had an interest in archaeology, so I decided to dip my toe back into the old water and see if this is someplace I want to swim. I discovered Achill Field School while researching programs that didn’t require you to be enrolled at a university, and also found it appealing, as I’d been wanting to cross Ireland off my bucket list since I was a teenager.

I participated in Achill Field School’s Introduction to Archaeology one-week programme, where we excavated part of a field wall connecting the Cromlech Tumulus site that previous groups had worked on, to a megalithic Court Tomb on the southern slopes of Slievemore Mountain on Achill Island. The field wall became visible almost immediately and having only one week to gather data kept our focus on each daily goal.

Day one started with a lecture on the background of Achill Island and an outline of the programme for the week. We were then shuttled off to Slievemore—the second highest peak on Achill—to grab the tools (buckets, trowels, shovels) and hike up to the site. Once there, we learned how to cut peat, which involves somewhat like a pogo stick motion without the fun bounce back. You can then pull up each square you have cut by its grassy top—in a feeling that I can only imagine compares to a warrior following their beheading of an enemy.

When we arrived to the site at the start of day two some areas were waterlogged and had to be scooped out before we could work. Unfortunately the weather in the morning was perfect… for midges! These tiny biting insects are a real pain so instead of staying at the wrong end of the food chain we went on a little excursion to avoid them and view some stone huts that were higher up on the mountain and further to the west. Whilst unsure exactly how old the small huts are or what they were used for, the hut site is an exciting place to visit. It is a rarely visited site as it is hard to find and overgrown with large ferns; it felt like we were in the jungles of Achill. When the breeze picked up enough to drive away the midges we returned to the excavation and worked on removing the rest of the overlying peat deposits to fully expose the field wall and then we cleaned up the edges of the trench to make sure they were perfectly straight. While doing so we found a piece of burnt flint, a smaller piece of flint, and some pieces of charcoal. We also discovered a strange pile of stones in the top right section of our trench that do not seem to be connected to the field wall—curious.

Day three began by giving the trench and the field wall a final clean before it was photographed, and it really did look lovely by the time we had finished. Once this was completed we began to record the sides of the trenches via section drawing to demonstrate the stratigraphy we had exposed. This is a complex process that begins with setting up a horizontal string line, making sure it is level and then running a tape measure along it. By measuring down from this string we were able to create a section drawing, a kind of mixture of a graph and a sketch, on to permatrace – large sheets of waterproof drawing paper. With the group split into two teams we were able to complete two drawings of the long sides of the trench by the end of the day.

Day four was to be spent finishing off the recording of the trench, first completing a horizontal plan of the trench and then preparing a written description of what we had uncovered. The plan was drawn using planning frames; large metal squares with a grid of strings running through them. The frames have to positioned precisely in the right place and then set horizontally so that you can look through the grid and draw the rocks beneath it accurately. The waterproof graph paper—and waterproof clothing—proved essential as the first few hours were spent being pelted with cold rain while trying to use a plumb line to find the points we needed on each of the individual rocks. After a couple of hours the rain subsided and we were able to complete the plans and then take levels, loads of accurate height readings, on the different parts of the trench. After lunch we were shown how to fill in context sheets, which are written descriptions of all the separate archaeological deposits that we had discovered. This was the final stage of the excavation so when it was completed we began dumping the loose soil from the spoil heap into the trench and packing it down until it was close to the top. We then brought down the individual blocks of peat we had cut on the first afternoon and used these to reinstate the ground surface. Placing the peat blocks back into the trench was like playing a game of earth Tetris, and requires a mixture of careful planning and improvisation; where ever there were little holes left we had to find smaller blocks and stomp them into place!

Upon our return to the Archaeology Centre, we learned how to do the rest of the paperwork that is needed for the site archive—I even enjoyed the paperwork—filling out the context number, license number, trench, and categorizing and labelling our finds (flint pieces) and samples (charcoal pieces). Then we classified the soil layers, which are numbered according to the Munsell colour chart. Yes, there is a book of soil colours; perfect if you are looking to paint your bedroom in shades of brown.

Day five was our field trip day. First on the agenda was a guided tour of the world-famous eighteenth century Deserted Village on Slievemore, then we got an up close look at the Minaun Cliffs near Keel before heading off the island all together. After crossing the bridge at Achill Sound we headed off towards Mulranny where we visited a beach, drove up into the hills to view the islands in Newport Bay, and stopped for coffee and a scone at Yvonne’s Cottage, which is a recreated traditional Irish cottage, complete with about a million artefacts. Then we were off to Rockfleet Castle, a Late Medieval Gaelic Tower House, to be regaled with the legends of Grace O’Malley, the Pirate Queen of Clew Bay. Our final stop was the Burrishoole Friary, the ruins of a religious house that dates from the 15th century and is surrounded by a cemetery that goes right down to the water’s edge.

Overall, the week on Achill at the Field School was an amazing experience, and I would love to do it again. The place is beautiful, the Accommodation Block is comfortable, the people are friendly, and you learn so much while doing fascinating archaeological work. Thanks to that week. I am now researching affordable ways to attend a university in Ireland in order to continue researching ancient cultures and the multitude of sites around the country.