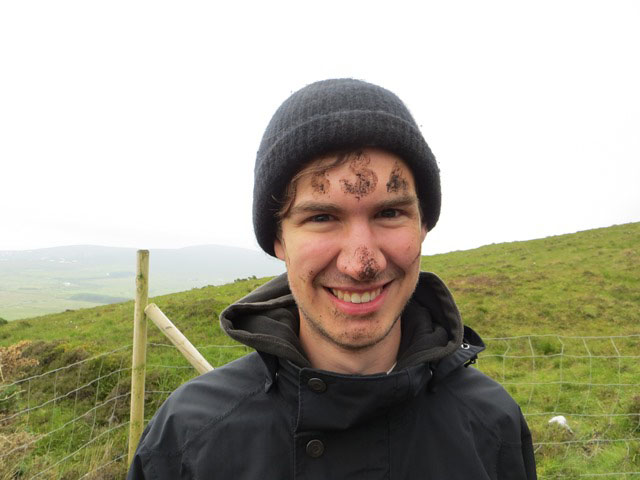 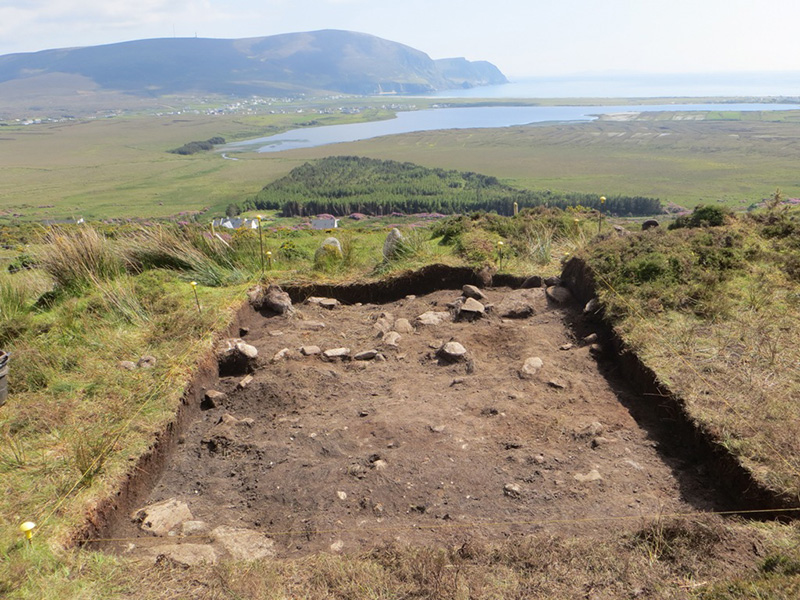 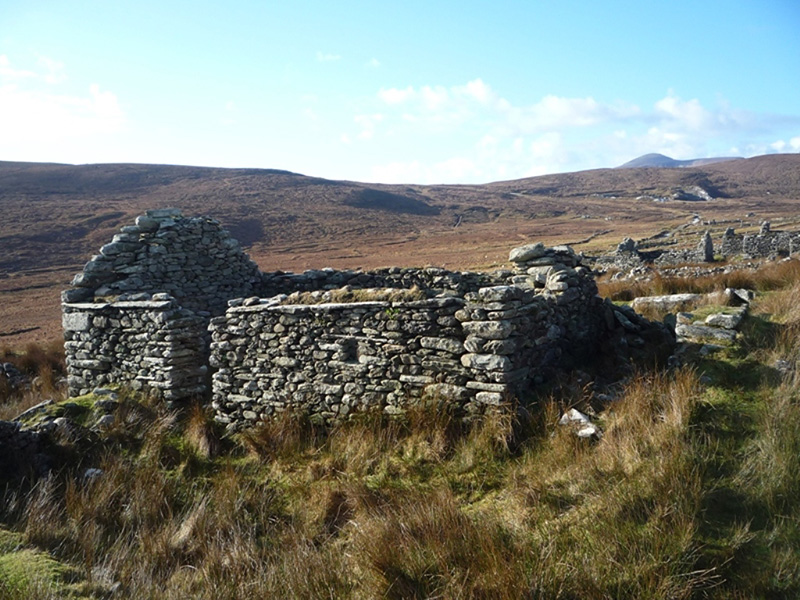 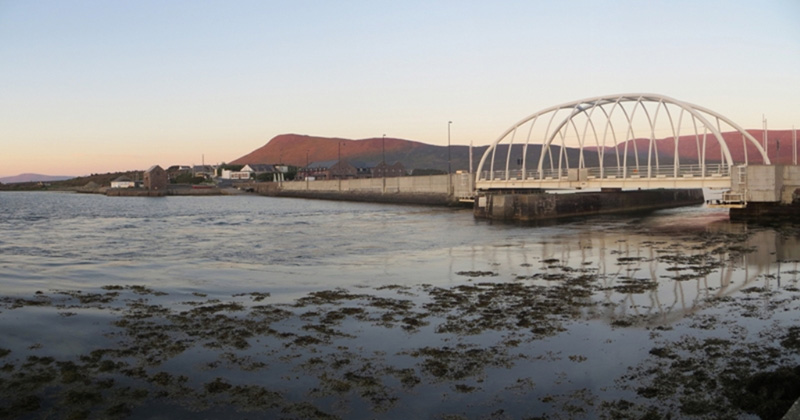 I’m studying anthropology at the University of Victoria on the west coast of Canada, which, among other things, means I spend a lot of my time staring at bones and learning about early medieval Europeans. This year, instead of going straight back to work after my finals at the paleontological museum where I’ve been lucky enough to get summer employment and basic field experiences before, I decided to pack up for a field school in Ireland where I could experience the kind of archaeology I’ve been learning about from books first hand and build up some of the skills I’ll need if I go on with archaeology as a profession. So, mid-April rolled around, I had handed in my final papers and finished my last exam and then I spent about a month around my house reading, pretending to pack, and annoying my roommates because the field school didn’t start until mid-May. The thirteenth of May finally did roll around though, and then I was off to Europe, where I spent a few days wandering around London before heading to Achill.

Eventually I flew across the Irish Sea to Ireland where I’d never been before and from which parts of my family may or may not have emigrated from. Once you’re in Dublin, to get to Achill, you basically have to take a bus to the other side of town from the airport, take a train across the country as far west as it’ll take you, and then drive a couple hours farther west until you reach the mist-draped, majestic green mountain covered, sheep infested, wave battered end of the earth where the field school sets you up in a quaint two-story accommodation (it’s rural Ireland, everything is quaint) and you meet the other students.

After a day for settling in, they started us off running with requisite safety announcements, introductions from our instructors, and some lectures. After that though, since the whole point of this experience is to get out of the classroom some, they really started us off running with our first field trip. If you leave the quaint two-story house we’re staying in, go over the quaint little bridge, turn left down one of the quaint roads, keep going past the point where it turns into a quaint glorified path, and crest the hill with the glaringly not quaint peat-cutting machines, you wind up around the base of a big Irish mountain called Slievemore (I’m told the Irish name literally means big mountain).

If you took a textbook summary of the Irish archaeological chronology, jumbled it up, and scattered it across the base of a mountain, you would basically have Slievemore. Achill has been occupied since at least the Neolithic and, over the course of our first field trip we saw evidence of occupation from about every period from the Bronze Age onwards. Up the southern slope of the mountain there are the remains of Bronze Age roundhouses and associated field systems. There’s an early medieval kiln over to the west side and remnants of settlements from that period.

On another hill to the west are the ruins of a signal tower from when Napoleon was invading the rest of Europe.

Below the Bronze Age roundhouses are a string of post-medieval houses, the remains of the Deserted village of Slievemore. Some of the early medieval finds like the souterrain are in the same spot; people probably lived on that spot for centuries upon centuries. Back near the Napoleonic tower the interested industrial archaeologist can see the effects of mid-twentieth century quartz mining and some associated structures. At the base of Slievemore is a cemetery that’s still in use and which overlies a church site from the early medieval period. Congratulations, you’ve just learned about archaeological sites representing pretty much the entire span of the human occupation of Ireland. For the eras you’ve missed, you can find them on other parts of the island

I only mentioned the Deserted Village in passing, but it’s actually a massively impressive and significant post-medieval site that runs along the base of the mountain and is visited by a huge number tourists on a daily basis.

The next morning, after our day of leaping across the bog thoroughly convincing ourselves the Indiana Jones movies were in fact accurate representations of the archaeological profession and also appreciating the archaeology itself, we were deemed to have learned enough about Irish archaeology to contribute to it and were taken up to our dig site for the first time. We were introduced to the mysterious Cromlech tumulus, which, as I understand it, has been variously described as some kind of mysterious thing made of stone, some other kind of mysterious thing made of stone, and a pile of rubbish made of stone by the archaeologists who have come before us.

In seriousness, the site has been surveyed many times, yielding a confused array of opinions from unclassified megalithic tomb to part-sheep fold. What you can actually see when you look at the site is a fairly sizeable mound lifting out of the bog topped by a very obvious ring with a depressed centre, kind of a volcano shape, that has a few other raised features with exposed stones in a few other places around it. In other words, when we got there, we had no idea what it was, although we were told the mound shape looked similar to the beehive-shaped, corbelled, dry-stone huts called Clocháns found in placed like Skellig Michael that were also described as stone igloos for the benefit of the Canadians in the group.

We were up there to excavate and hopefully gain some idea what this thing is or was. The education of our group of overenthusiastic and slightly unwitting university students thus began with learning the surprisingly indelicate process of de-turfing. Basically, we split into two teams, one of which spent their time jumping up and down on spades until chunks of sole were ripped off their hiking boots and the other of which spent their time hauling the blocks of peat the first team was cutting off up the hill to our spoil heap. With the kind of stone structure we’re excavating it’s really the only way to get the peat, which I basically imagine as centuries old play-doh, off the site. The trick is, you have to try to be careful to keep your cuts straight and not be too aggressive to disturb the intact archaeology you’re supposed to be uncovering. If you’ve any experience cutting apart overgrown, centuries old play-dough with an oversized spatula, you’ll know that’s easier said than done, which is why we’re here learning.

By the end of the week, we’d got better at de-turfing, converted the Americans to the metric system, learned the Canadians weren’t all that great at judging metric distances despite using them their whole lives, learned how to use our nifty little diamond-shaped trowels to scrape down to the soil layer we wanted to expose, and found out the layer we wanted to expose was this really interesting richly-coloured orange soil that contained loads of charcoal mixed throughout it. All this so we could admire the beautiful mound of as yet unknown age revealed by our labours and learn a little bit more about the archaeology of this beautiful place.