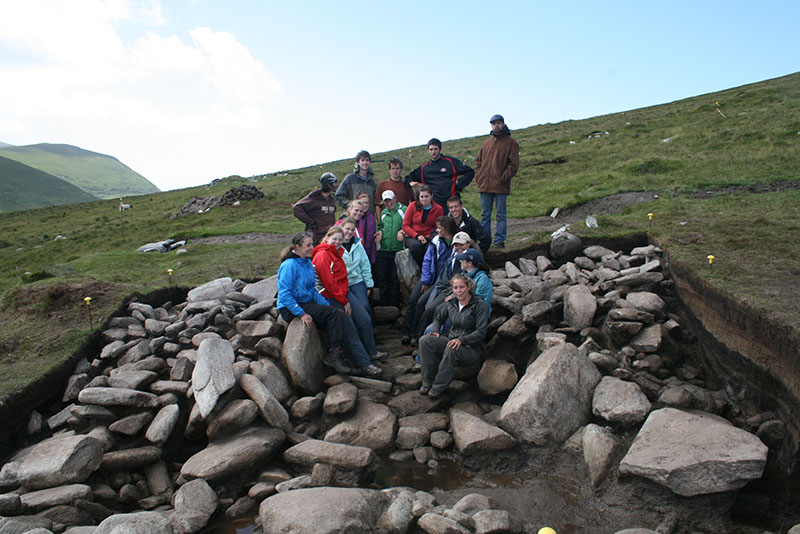 Hello there, my name is Raymond Baird and I’m from Rochester, New York. I am attending college at SUNY Brockport. In addition to being an Anthropology major, I am also majoring in history with two minors in museum studies and theater. I chose to come to Achill Field School for multiple reasons. First of all it was in a section of the world that I am interested in. I have always been fascinated by history and archeology related to the Britain and Ireland. So when I started browsing for field schools, the one here on Achill really fascinated me. Not only was this island filled with historic locations dating from the Neolithic all the way to the Second World War, but the site chosen for this year’s dig seemed very intriguing. I couldn’t pass up the opportunity to excavate a site that has been debated by archeological surveys since the 1880s and to receive nine credit hours for my home college for doing so. In short, this project combined my regional interest as well as being an enlightening location to obtain college credit.

This is the second time I have had field experience doing archaeology. The first time was in 2012 which was offered by Monroe Community College. This experience lasted for ten days. We dug on a professor’s property in search of a lost eighteenth century farm buildings and other features. All though this did give me a flavor for archaeology, I wanted to experience another field school where I could work in greater depth on a site.

This week has been very exciting on the site on Slievemore Mountain. On Monday we began the week by discussing the remaining tasks left to complete. After these meetings we continued the excavation. That day we identified four possible post holes/pits. Shortly after these were found, a small flint flake with some intricate working on it was discovered. In the section of the trench where I was working, I made a fascinating discovery, a trench/gully began to emerge from the dusty soil. As the week progressed, I continued to work on this feature. On Thursday I spent the day improving my abilities to draw features and rocks within the trenches I was working in, and I know my drawing skills have come on a lot over the last few weeks. It wasn’t until the Friday afternoon of the fifth week that we were able to come up with a possible explanation of what the site was, a Burnt Stone Mound with an adjacent building that was perhaps used as a sauna. This is pretty speculative at the moment but after looking at the large burnt stone spread uncovered that day, as well as examining the multitude of pits found over the past week and a half, and the gully, it is possible that this could indeed be the explanation. It would have been used to relieve arthritis and stiff joints. We cannot be sure of this explanation until the rest of the site has been excavate which will occur over the next year or two, but it’s an explanation that seems to fit with what we’ve found so far. Unfortunately such sites, although mostly commonly used in the Bronze Age, were in use during other periods such as the Neolithic and the Early medieval period, so it doesn’t really help us date the site.

In addition to digging on Slievemore, we also took a field trip to conduct a survey on a promontory fort on a small island between Achill and Achillbeg. We decided to conduct a survey on this feature for two reasons, one because we needed experience surveying a site and second, because this site is in danger of eroding into the sea. While surveying, we were taught how to map out a site using tape measures and using a GPS unit, which was a great mix of old and new techniques. Before we went to the site our tutor explained to us that we were the first to ever survey that location in detail and that in little over a decade this site might be forever lost to coastal erosion. So in addition to learning how to properly survey a site, we made a really useful account of a site that will perhaps be the only proper record of a place that will soon be lost to natural forces. That was a pretty awesome feeling!

I feel really lucky to have had this experience with Achill Field School. It is thanks to the amazing faculty that run this school and my fellow students from across Canada and the United States that I am leaving here inspired to continue to work my hardest within the discipline of anthropology.