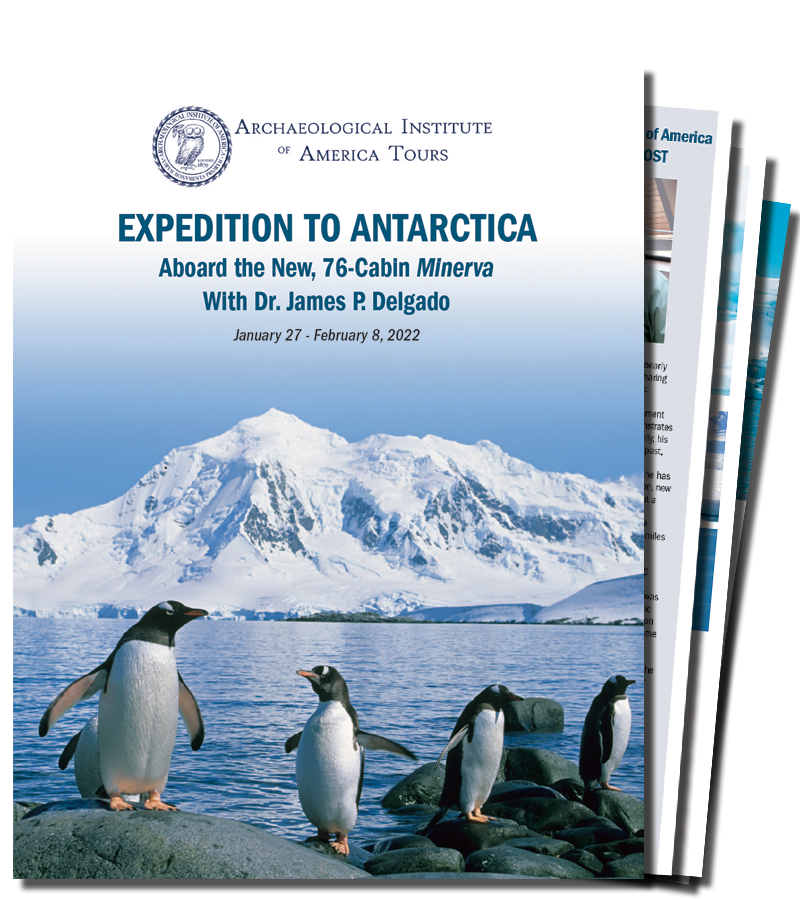 During the long days of Antarctica’s austral summer, you will enjoy superb observation and photographic opportunities of abundant seals, whales, and sea birds, including hillsides teeming with penguins. Admire blue Antarctic waters and the dramatic play of light on icebergs, glaciers, and towering mountains.

Enjoy the affable company and fascinating insights of AIA lecturer/host Jim Delgado, an expert in exploration history and marine archaeology.

While not usually considered an “archaeological” destination, the artifacts of Antarctic exploration are now over a century old and qualify as archaeological. Dr. Delgado’s lectures will address subjects such as the preservation of the huts and debris from the Heroic Age of Antarctic Exploration. He will be joined by other guest lecturers plus a seasoned team of expedition leaders and naturalists who will share their firsthand knowledge of Antarctica.

Under construction in Finland and launching in October 2021, Minerva is designed specifically for polar exploration. Enjoy the luxurious amenities of this new, state-of-the-art expedition ship with just 76 staterooms and suites for 152 guests. The ship’s size; limited guest capacity; superb accommodations and public spaces, facilities, and services; advanced technical and mechanical systems; and a complement of experienced officers and crew make Minerva the ship of choice for exploring Antarctica in safety and comfort. A fleet of Zodiac landing craft will bring you into
intimate contact with this incredible continent.

We hope you will join us on this once-in-a-lifetime travel adventure to the “White Continent.” This program is co-sponsored by other organizations, so I encourage you to contact AIA Tours today to reserve your preferred
cabin type.

Book by September 10th and pay only $399 per person for the round-trip airfare to Buenos Aires!
The airfare is applicable from 25 major US gateways.

Thursday, January 27, 2022: DEPART THE US
Depart the United States for Buenos Aires, Argentina.

Friday, January 28: BUENOS AIRES, Argentina
Arrive in Buenos Aires, the capital of Argentina. Transfer to the Alvear Icon Hotel. In the evening, meet fellow travelers, your AIA lecturer and host, and your trip director at an evening cocktail reception.

Saturday, January 29: BUENOS AIRES/USHUAIA/SHIP EMBARKATION
Transfer to the airport for the group flight to Ushuaia, claimed to be the world’s southernmost city, located in Argentina’s Tierra del Fuego, between the famed Beagle Channel and the mountains. On arrival, transfer to the pier to embark the Minerva, which will begin cruising early this evening. As the ship cruises the Beagle Channel, enjoy a spectacular vista of glaciers and misted mountains. Meals: D

Sunday, January 30: AT SEA
Attend lectures and enjoy the ship’s facilities as the Minerva cruises through the Drake Passage to Antarctica. Look for Albatross, Cape Petrels, and whales that may accompany the ship on its passage. Meals: B, L, D

Monday, January 31 to Saturday, February 5: EXPLORING ANTARCTICA
Explore the pristine wilderness of the Antarctic Peninsula and its surrounding islands. The Peninsula is a narrow finger of land that separates the ice-choked waters of the Weddell and Bellingshausen Seas. As Minerva cruises through scenic waterways, witness a breathtaking panorama of icebergs, blue glaciers, and jagged snow-capped mountains. Aboard the ship’s Zodiacs, cruise among ice floes and explore penguin rockeries. Although the itinerary varies according to local ice and wind conditions, we plan to land at such places as Paradise Harbor, where humpback and minke whales are often sighted offshore; Petermann Island, the habitat of Gentoo and Adelie penguins; and Deception Island, known for its volcanically-heated hot springs. Navigating through the magnificent Lemaire, Errera, Neumayer, and other protected channels is also planned. Meals: B, L, D

Sunday, February 6 & Monday, February 7: AT SEA
Watch for whales and seabirds – and enjoy onboard lectures and the ship’s amenities – as Minerva cruises back to Ushuaia. Meals: B, L, D

Tuesday, February 8: USHUAIA, Argentina/SHIP DISEMBARKATION/BUENOS AIRES/US
Disembark in Ushuaia. Transfer to the airport for the group flight to Buenos Aires to connect with flights to the United States. Meals: B