France: The Reach of the Romans 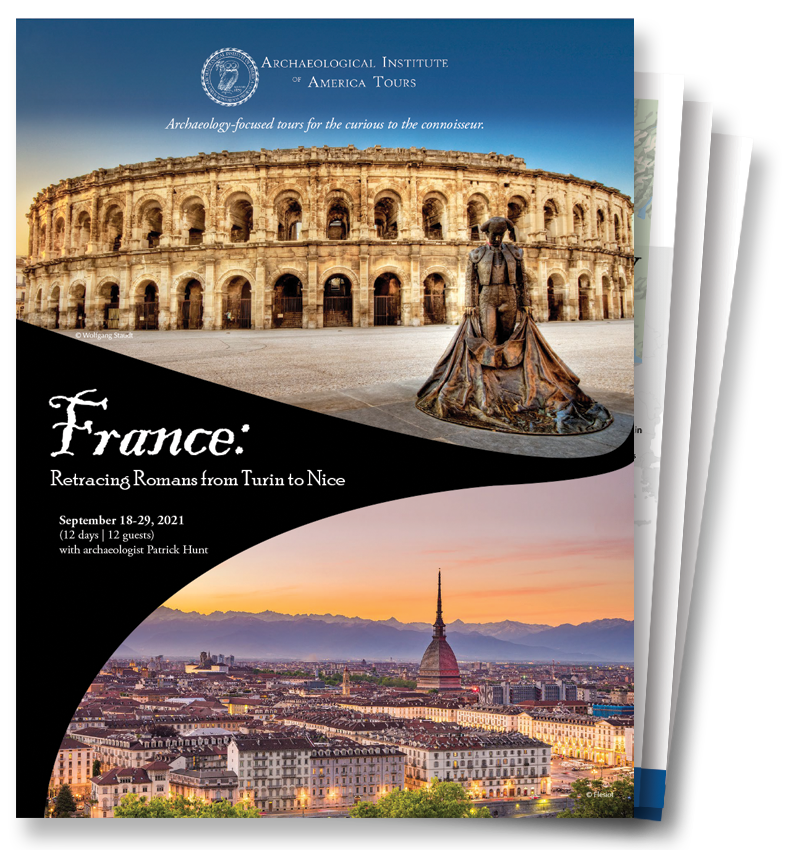 From Turin, Italy to Nice, France

Join archaeologist Patrick Hunt on this exciting new itinerary from Turin to Nice and discover how the ancient Gauls and Romans interacted with the landscapes and shaped the history and cultures of northern Italy and southern France. Together we will cross the Alps by high-speed train, from Turin to Lyon.

“The archaeological sites and sights were amazing. Dr. Hunt has a wide variety of interests and knowledge that he was pleased to share with us.” – Doris, Virginia (AIA northern Italy tour)

France: The Reach of the Romans, AIA Tour. Travel with us!

Sunday, September 19: Arrive in Milan, ITALY | Private transfer to hotel in Turin | Welcome dinner
Upon arrival at Milan Malpensa Airport (MXP) you are met for a private transfer to our hotel in the city center of Turin, which was an ancient Roman castrum (military garrison town) and the first capital of Italy. The balance of the day is at leisure to relax and perhaps stroll around the neighborhood. We gather this evening for a welcome reception at the hotel, followed by a traditional Italian dinner at a local restaurant. Overnight at the 4-star Hotel Victoria for three nights. (R,D)

Monday, September 20: Turin: walking tour, Museum of Antiquities
This morning we delve into the elegant city of Turin with a local art historian as our guide, tracing its glorious 2,000-year history. During our walking tour we will see the ancient Roman Quarter, dating back to when the Roman city was called Augusta Taurinorum; pass by some of the many stunning Residences of the Royal House of Savoy (a UNESCO World Heritage site), such as Palazzo Carignano, Palazzo Madama, and Palazzo Reale; and see medieval churches and stately squares. After lunch at a historical café we visit the Museum of Antiquities, which has a section dedicated to the region’s Roman cities and especially Augusta Taurinorum. The museum is housed on the grounds of the Royal Palace of Turin, also part of the aforementioned Residences of the Royal House of Savoy. The balance of the day and dinner are at leisure. (B,L)

Tuesday, September 21: Aosta | Turin
Today we drive to Aosta, a picturesque mountain town nestled in the folds of the western Alps. Explore Aosta’s imposing Roman ruins with a local archaeologist, visiting Porta Praetoria, a stone gateway dating to 25 B.C.; the remains of a striking Roman theater; and the Cryptoporticus, a semi-subterranean network of passageways whose original purpose remains a mystery. After a lunch of Italian fondue, made with local fontina cheese, return to Turin for the balance of the day and dinner at leisure. (B,L)

Wednesday, September 22: Turin: Egyptian Museum | High-speed train to Lyon, FRANCE
In the morning we explore Turin’s renowned Egyptian Museum in the company of its Director. This is the only museum other than Egypt’s Cairo Museum that is solely dedicated to Egyptian art and culture. The collections that make up today’s Museum, which once were property of the Royal House of Savoy, were enlarged by excavations conducted in Egypt by the Museum’s archaeological mission between 1900 and 1935. After lunch at leisure in Turin, we board a high-speed train that will take us across the Alps to Lyon, France, in less than three hours. Enjoy dinner tonight at a local restaurant. Overnight at the 4-star Grand Hôtel des Terreaux for two nights. (B,D)

Thursday, September 23: Lyon | Lugdunum | Lyon
Enjoy a guided stroll this morning through the old town of Lyon, a UNESCO World Heritage site. We then board our motor coach for Lugdunum, the Roman city built two millennia ago on Fourvière Hill. Visit the well-preserved theater, the oldest in France, as well as the smaller odeon. After an independent lunch we visit the Gallo-Roman Museum, which displays numerous artifacts from nearby excavations. Cap off the afternoon at the Gothic Cathedral of Saint Jean, which features a giant, working medieval clock. The balance of the day and dinner are at leisure in Lyon. (B)

Friday, September 24: Saint-Romain-en-Gal | Winery lunch | Pont du Gard | Arles
Check out of our hotel this morning and drive to the archaeological site of Saint Romain-en-Gal, also called “little Pompeii,” where we tour the site and its museum with the curator in charge of the mosaic restoration. After lunch at a local winery, continue south to the Roman city of Arles, our home for the next four nights. En route, stop at the UNESCO World Heritage site of Pont du Gard, the aqueduct built by the Roman leader Agrippa that also served as a bridge over the Gardon River, for a behind-the-scenes walk inside the aqueduct (pending confirmation). Overnight at the 4-star Maison Volver Hotel for four nights. (B,L,D)

Saturday, September 25: Arles: Musée de l’Arles Antique, Les Alyscamps
This morning is dedicated to exploring the ancient city center of Arles, a UNESCO World Heritage site, whose earliest Roman monuments date to the 1st century B.C., including its amphitheater, theater, and cryptoportico (subterranean galleries). This afternoon we visit the new Musée de l’Arles Antique, which houses the world’s second finest collection of sarcophagi after the Vatican’s; as well as the 4th-century Roman necropolis of Alyscamps. Dinner tonight is at leisure. (B,L)

Sunday, September 26: Vaison la Romaine | Orange | Arles
Today we explore towns and sites near Avignon, beginning with the charming village of Vaison la Romaine, whose Gallo-Roman remains, spread over several sites, make this the largest archaeological site in France. The medieval town, with its impressive castle of the Counts of Toulouse, is perched on a hill overlooking the main town. Enjoy lunch at a typical country inn and then continue on to visit Orange, a UNESCO World Heritage site, where we view the iconic Arc de Triomphe and one of the world’s best-preserved Roman theaters. Return to Arles in the late afternoon, for the balance of the day and dinner at leisure. (B,L)

Monday, September 27: Nîmes | Arles
Begin the day with a walking tour of Nîmes, which became part of the Roman Empire in the 1st century A.D., including its ancient Maison Carrée temple and amphitheater. After a visit to the high-tech Roman World Museum, which displays 5,000 artifacts from the ancient city, and then time for lunch at leisure in Nîmes, return to Arles for some free time to explore on your own. Gather for dinner this evening. (B,D)

Tuesday, September 28: Avignon | Nice | Farewell dinner
On our way to Nice we stop in Avignon, whose historic center is a UNESCO World Heritage site. Explore the Palais des Papes, a fortified, 14th-century palace that (with 49,000 square feet of floor space) is the largest Gothic palace in all of Europe. Its priceless frescoes still remain in the private chapels and apartments used by the popes. Enjoy lunch in the old town and then re-group for our drive onward to Nice. After settling in to our hotel with ocean views, we gather for a festive farewell dinner. Overnight at the 4-star Westminster Hotel. (B,L,D)

Wednesday, September 29: Private transfer to airport | Fly home
You are met at our hotel for private transfers to Nice International Airport (NCE) for flights home. (B)