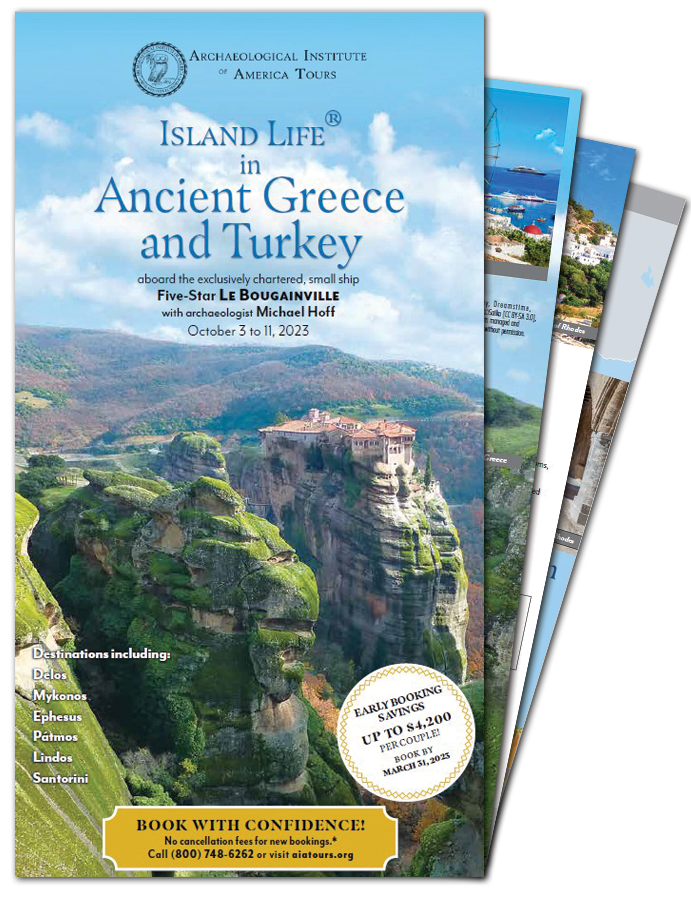 Journey with Archaeological Institute of America lecturer and congenial host Michael Hoff, a classical archaeologist, on this voyage in Greece and Turkey, exploring the preserved treasures and mythical landscapes of the ancient Greco-Roman world. Cruise among fabled islands aboard the exclusively chartered, five‑star Le Bougainville. This elite small ship has only 92 suites and staterooms, each with a private balcony, and is able to moor in small ports of call inaccessible to larger vessels.

Our epic program calls on Delos, Mykonos, Pátmos, Rhodes, and Santorini—ancient destinations steeped in mythology and history. Cruise to Turkey’s sun‑drenched coast to visit Ephesus, the most spectacularly preserved Greco‑Roman city in the world. On Greece’s mainland, tour the scenic wonder of Meteora, where 14th– and 15th-century Orthodox monasteries crown soaring sandstone cliffs. Learn more about contemporary Island Life® in the Greek Isles, where you will meet and engage with local residents.

During your cruise, a team of onboard experts, including AIA lecturer/host Michael Hoff, will share their knowledge through a series of enriching lectures and informal discussions. This program is an excellent value, with all accommodations, meals, and a daily excursion included, and you only need to unpack once. The program is co-sponsored by other organizations, so make your reservations now while space and early booking savings are available!

Book with confidence! No cancellation fees for new bookings.
Early booking savings up to $4,200 per couple, if booked by March 31, 2023.

Single supplements apply across all categories at 160% of the per person double price (limited availability). Port taxes are an additional $450 per person.

Lecture Hall on the Le Bougainville

Thursday, October 5: Volos/Meteora
Arrive in Volos and enjoy an excursion to the UNESCO World Heritage Site of Meteora. One of the most important complexes of Greek Orthodox monasteries, Meteora’s monasteries are built on natural sandstone massifs and date to the 14th and 15th centuries. Attend the Captain’s Welcome Reception and Dinner this evening.

Friday, October 6: Delos/Mykonos
This morning, visit the UNESCO World Heritage Site of Delos—the legendary birthplace of Artemis and Apollo. Walk along the Sacred Way to the Sanctuary of Apollo, a spectacularly rich archaeological site with remains of three separate temples from the fifth and sixth centuries B.C. See the legendary Terrace of the Lions, dedicated to Apollo, where hand-carved marble statues guarded the island for nearly 2,600 years. After lunch on board the ship, explore the island of Mykonos where, according to ancient legend, craggy hills and clefts were formed from the petrified bodies of giants defeated by Hercules.

Saturday, October 7: Kusadasi, Turkey, for Ephesus
Arrive in Kusadasi and drive to Ephesus, a vast archaeological site of Greek, Roman and Byzantine ruins including the restored and reconstructed Celsus Library and the Grand Theater. Visit the Terrace Houses and the Ephesus Museum, which contains artifacts from this ancient city.

Sunday, October 8: Pátmos, Greece
On the island of Pátmos, tour the Greek Orthodox Monastery of St. John, a UNESCO World Heritage Site. See the Cave of the Apocalypse, where St. John the Apostle most likely wrote the Book of Revelation in A.D. 95. This afternoon, meet and engage with local residents who will discuss daily life on the islands during the Island Life® forum.

Monday, October 9: Rhodes/Lindos
Dock in Rhodes at the wall of Rhodes Town, a UNESCO World Heritage Site, and visit the 14th-century Palace of the Grand Masters. Enjoy an optional excursion this afternoon to the ancient village of Lindos. See the Church of Panagia and its clifftop acropolis or indulge in an afternoon at leisure in Rhodes. Enjoy a performance of traditional Greek music and dance this evening aboard the ship.

Tuesday, October 10: Santorini
Be on deck as the ship cruises into port at Santorini, whose caldera was created by the island’s devastating volcanic eruption ca. 1600 B.C. Tour the Minoan ruins of Akrotiri, buried intact by layers of pumice and ash for millennia. Visit the Museum of Prehistoric Thera, which houses finds excavated from Akrotiri. From the town of Fira, take a cable car to the pier and reboard the ship for lunch. Enjoy time at leisure in Santorini.

Wednesday, October 11: Athens/Home City
Disembark and continue on the Thebes and Delphi Post‑Program Option, or transfer to the airport for your return flight home.

Price per person, based on double occupancy: $995
Price per person, based on single occupancy: $1,345
Begin your journey with an immersive experience in the ancient city of Athens. Explore the monumental Acropolis—a UNESCO World Heritage Site with the perfectly proportioned Parthenon, a graceful example of Doric architecture. Tour the archaeological treasures of the Acropolis Museum and enjoy the colorful neighborhood of Plaka, the oldest section of Athens. Discover the idyllic coves and sparkling Aegean waters of Cape Sounion and follow the ancient route of Pericles to the Temple of Poseidon—where 15 of the original 34 Doric columns are remarkably still standing. Accommodations are for two nights in the luxurious Hotel Grande Bretagne.

Price per person, based on double occupancy: $745
Price per person, based on single occupancy: $945
Extend your journey with a two-night itinerary exploring Delphi, a UNESCO World Heritage Site, and Thiva, or Thebes—featuring a visit to the Archaeological Museum of Thebes, where exhibits span from the Neolithic era to the end of Ottoman rule. Tour Delphi, visiting the Delphi Archaeological Museum, and walking the site’s Sacred Way to see the Treasury of Athens, the Temple of Apollo, the theater, and the impressive stadium. Spend one night in the Domotel Anemolia Hotel and one night in the Sofitel Athens Airport Hotel.

Further details will be provided with your reservation confirmation.