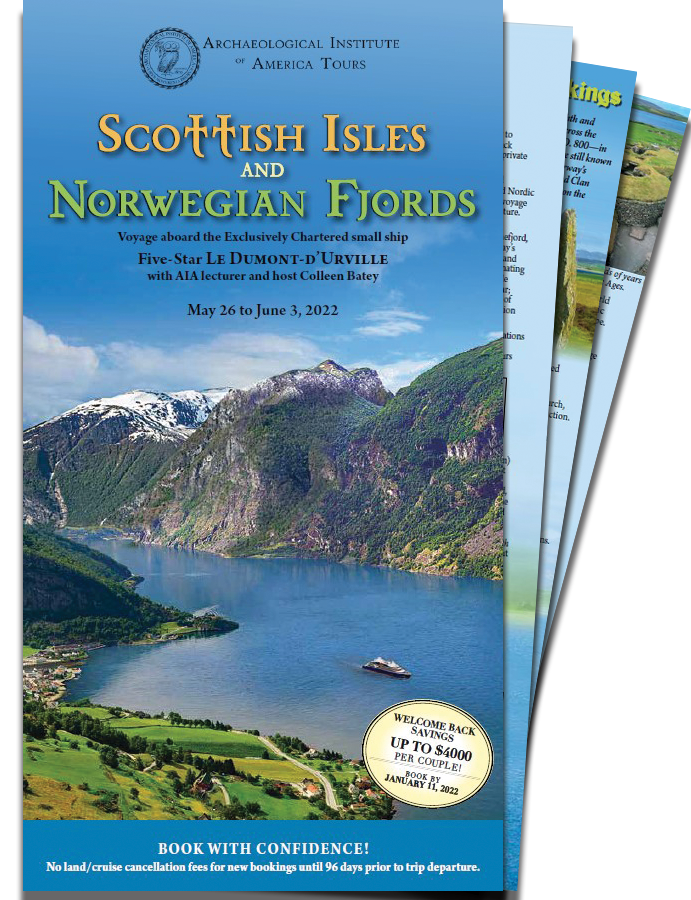 I invite you to join AIA lecturer and host Colleen Batey on this magnificent cruise from Norway to Scotland, visiting remote destinations forever linked by their Viking heritage. Embark (and unpack just once) the five-star Le Dumont-d’Urville with only 92 suites and staterooms, each with a private balcony, providing all the luxury and sophistication of a fine hotel.

Dr. Batey will be part of a team of onboard experts who together will offer a series of lectures and informal discussions. This specially-designed itinerary follows the stepping stones of Scottish and Nordic civilizations during the best time of year, when the weather is mild and the days are long—a rare voyage accomplished only aboard a small ship cruising into smaller ports where larger vessels cannot venture.

Set out from charming Bergen, where rows of colorful, gabled houses on the historic Bryggen waterfront evoke the city’s past as a center of Hanseatic League trade. Cruise into the majestic Sognefjord, Norway’s longest and deepest fjord; and take one of the world’s most scenic train rides along Norway’s spectacular mountain landscape aboard the Flåm Railway. Continue onward for Scotland’s Orkney and Shetland Islands, with their remarkable links to the distant past. Learn more about the islands’ fascinating Neolithic history from guest lecturer and renowned archaeologist Nick Card, noted for his incredible commitment to research in the region. Marvel at the Neolithic standing stones of the Ring of Brodgar; the 5,000-year-old village of Skara Brae; and the settlement of Jarlshof, revealing layers of thousands of years of human history.

This is an exceptional small-ship voyage—a great travel value with all meals, excursions, and accommodations included. Our cruise, hotel, train, and motorcoach suppliers are health and safety-conscious and have addressed these concerns. We will share this voyage with other organizations, so please contact AIA Tours to reserve your cabin today.

For detailed pricing and cabin information, download the brochure here.

The pre- and post- cruise options are available at additional cost. Details will be provided with your reservation confirmation.

Thursday, May 26 & Friday, May 27, 2022: U.S./Bergen, Norway
Depart the U.S. The next day, arrive in Bergen, imbued with ancient Viking history, and embark the Five‑Star Le Dumont-d’Urville. (D)

Saturday, May 28: Bergen
Founded on a Viking settlement in 1070 and the Norwegian capital during the 12th and 13th centuries, Bergen was an important part of the Hanseatic League’s trading empire from the 14th to mid‑16th centuries. The city’s illustrious past can be felt in the beautifully preserved gabled buildings of Bergen’s Bryggen, or the old wharf, a UNESCO World Heritage site surrounded by lushly carpeted hills and fjords. Stroll the grounds of Troldhaugen, the summer home of famed Norwegian composer Edvard Grieg. Visit the reconstructed Fantoft Stavkirke, a traditional 12th-century wooden stave church, noted for its durable post and lintel construction. Enjoy the afternoon at leisure in Bergen before the Captain’s Welcome Reception on board the ship this evening. (B,L,R,D)

Sunday, May 29: Cruising the Norwegian Fjords/Flåm Railway
Norway’s fjords and islands offer some of Europe’s most profoundly beautiful coastal scenery, where sea mist and sunlight enhance the fjord’s deep blues and the valley’s lush greens. Cruise majestic Sognefjord, passing traditional farmsteads and villages flanked by soaring mountains and glaciers. This morning, board the Flåm Railway, one of the world’s most scenic train rides. This masterpiece of Norwegian engineering—the steepest standard‑gauge railway track in Europe, which spirals 2,835 feet—opened to the public in 1940 and travels 13 dramatic miles through 20 tunnels to Myrdal’s mountaintop station. Watch as snowcapped mountains, cascading waterfalls—including the awe‑inspiring Kjofossen—and intriguing hamlets unfold along this alpine branch of the world‑renowned Bergen Line. (B,L,D)

Monday, May 30: Lerwick, Shetland Islands, Scotland
Explore the remote Shetland Islands, declared a Global Geopark by UNESCO for their geologically diverse landscapes and seascapes carved by prehistoric ice. Here, nature’s colors
and textures endlessly shift, and clamoring gannets and puffins crowd the dramatic rock cliffs. Dock in Lerwick, Shetland’s capital, and journey to the island’s southernmost point, scanning the landscape for Shetland’s famous ponies grazing on the grass‑covered knolls. Visit Jarlshof, a tentative UNESCO World Heritage site deemed the zenith of prehistoric architectural achievement in Northern Europe. Multi-period remains span over 4,000 years of human history, including Late Neolithic stone houses, a Bronze Age village, an Iron Age broch and wheelhouse, Norse longhouses, a medieval farmstead, and a 16th‑century laird’s house. This evening, the director and head archaeologist of the Ness of Brodgar site, Nick Card, will provide his keen insights about this impressive ancient compound that lies outside of Kirkwall. His research and fieldwork are internationally regarded, both in the field of archaeology and by the popular press. (B,L,D)

Tuesday, May 31: Kirkwall, Orkney Islands
Steeped in Viking heritage, the largest Orkney Island, known as Mainland, has been designated a UNESCO World Heritage site for its concentration of prehistoric treasures defined as the Heart of Neolithic Orkney. Nearly 1,000 years before Giza’s pyramids were built and over 500 years before Neolithic humans raised Stonehenge, Stone Age inhabitants of this archipelago, dating from 3200 B.C., erected the Ness of Brodgar, a mysterious compound rivaling the scale of the Acropolis—demonstrating advanced technological prowess and Neolithic artistry. Walk among the nearby stone monoliths of the Ring of Brodgar, raised more than 4,000 years ago in the patterned circle of a henge. See the ceremonial Stones of Stenness en route to the settlement of Skara Brae, which was inhabited more than 5,000 years ago by an early Orcadian culture known for decorative arts and sophisticated craftsmanship. Thousands of years later, the Vikings established the port town of Kirkwall on Mainland, leaving behind the towering 12th‑century Saint Magnus Cathedral, known as the “Light of the North.” Hear the classically haunting sounds of a Scottish bagpiper as you reboard the ship. This evening, a Scottish storyteller weaves traditional tales that have been handed down by word of mouth for generations. (B,L,D)

Wednesday, June 1: Kyle of Lochalsh/Isle of Skye
Visit the soul-stirring 13th‑century Eilean Donan Castle, named for a sixth‑century Irish Saint. Colonel MacRae, of Clan MacRae, restored this icon in 1932 and established a clan museum. Travel across heather‑covered moors and through the starkly beautiful Cullin Mountains en route to the scenic capital of Portree, situated along the unforgettable coastline of ethereal Isle of Skye. (B,L,D)

Thursday, June 2: Fort William/Scottish Highlands
The legendary Scottish Highlands and their striking, rugged scenery have inspired countless stories with their enchanting and mysterious allure. Begin your day in bucolic Glenfinnan and view the Glenfinnan Viaduct, immortalized by the Hogwarts™ Express in the Harry Potter film series. See the Glenfinnan Monument, commemorating the Jacobite Highlanders that Bonnie Prince Charlie rallied against King George II in 1745. Stop along the Caledonian Canal to view Neptune’s Staircase, an incredible feat of engineering when it was built in the early 1800s and the longest staircase lock in Britain. Travel along castle-dotted shores enshrouded with myth and legend to Glencoe, hailed as one of Scotland’s most scenic glens, partially owned and preserved by the National Trust for Scotland. Attend the Captain’s Farewell Reception on board the ship this evening. (B,L,R,D)

Friday, June 3: Glasgow/U.S.
Disembark in Glasgow and continue on the “Scotland’s Cultural Capitals” Post‑Program Option OR transfer to the airport for your return flight to the U.S. (B)