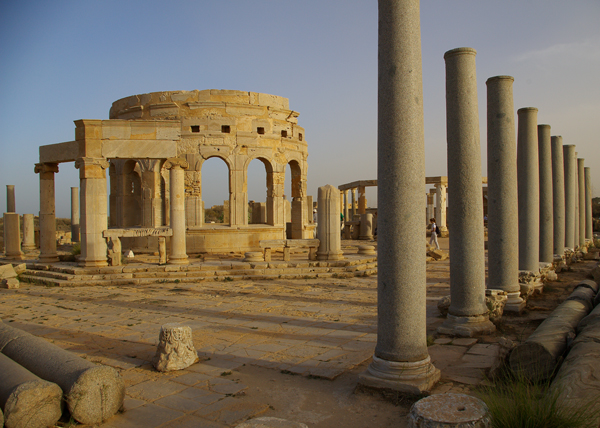 We shall start our voyage on the island of Crete with its fabled palaces of Knossos and Phaestos. After departing Crete we will set sail for Libya. From Derna, we will discover Cyrene, founded in the 7th century b.c. by Greeks. Built on the edge of a plateau, sprawling Cyrene commands a superb position, overlooking the valley and the sea. We will also have the opportunity to explore nearby Apollonia, set on a broad bay. Voyaging along Libya’s coast we will call in Benghazi, Libya’s second largest city, which provides our base for exploring the ancient nearby settlements. The highlight of our visit to Khoms will be Leptis Magna, founded 3,000 years ago by the Carthaginians, with a degree of splendor that rivaled Rome itself. Located by the sea, Sabratha’s ruins include temples, public baths, fountains, and a museum noted for its collection of mosaics. El Djem provides us with its great Roman amphitheater and Museum. After disembarking in Hammamet, we will visit the ancient and fabled city of Carthage.

Map of this itinerary

Arrive in Heraklion, Crete and transfer to Hotel Megaron.

Crete, Zeus’s legendary birthplace, was home to the Minoan civilization, Europe’s first. A morning tour visits Knossos, where the brilliance and refinement of the Minoans are revealed. The largest Bronze Age palace on Crete, Knossos is a labyrinth of corridors, stairways, and chambers decorated with frescoes illustrating life as it was 4,000 years ago. Continue to the Heraklion Museum’s temporary exhibit. After lunch at a local tavern, transfer to Rethymnon to board Callisto.

Today Callisto calls at the small port of Aghia Galini to visit the beautifully situated Minoan palace of Phaestos, known for its breathtaking view of Mount Dikti and the Plain of Messara. The remains are actually two distinct palaces built one on top of the other.

From Derna, on Libya’s Cyrenaican coast,take a full-day excursion to Cyrene, oneof North Africa’s great cities of antiquity.Founded by Greek colonists from Thera(Santorini) in the 7thcentury B.C., Cyrenewas built on the side of a hill, facing theplain and the sea. Its substantial ruinsand monuments testify to its wealth andpower.

This morning we’ll journey to Apollonia to explore the site and visit the Museum, which displays excellent mosaics from the region’s early Byzantine churches.

Today explore Libya’s second largest city, Benghazi, a major commercial port and a cultural center, where we will visit the covered Souq al-Jreed. Arab, Ottoman, and Italian rule have influenced the different streetscapes, buildings, and quarters in Benghazi.

Today Callisto calls in the city of Surt. Enjoy a tour of the city, including the General People’s Congress complex and the Great Man-Made River reservoir.

This morning, call at Khoms on Libya’s Tripolitanian coast. Nearby are the ruins of Leptis Magna, one of the Mediterranean’s most compelling ancient sites. Leptis Magna achieved its prominence in the 3rd century A.D. under the Severan emperors, who launched an unprecedented, lavish building scheme, embellishing the city with extraordinary public buildings. Excellently preserved to the present day because of its burial under shifting sands, this glorious coastal city is a unique example of ancient town planning. Spend the day exploring the city’s magnificent buildings, monuments, temples and streets. Also visit Villa Sileen, a recently restored Roman residence with vivid mosaics depicting chariot races and gladiatorial combat scenes.

Tripoliwas settled by Phoenicians, colonized by Greeks, and conquered by Romans, who erected the impressive triumphal arch honoring Marcus Aurelius. Later, Tripoli grew wealthy from the Saharan caravan trade. In the morning, travel to nearby Sabratha, the ancient city that began as a Carthaginian trading post, became a permanent settlement in the 4th century B.C., and flourished in the Roman period. Located by the sea, Sabratha’s ruins include temples, public baths, fountains, and a museum noted for its collection of mosaics. In the afternoon, tour the Jamahiriya Museum, housed in the massive medieval Citadel, and the city’s colorful souks.

Arrive in Sfax and drive to El Djem to explore its great Roman amphitheater, built in the 3rd century A.D.to house 35,000 spectators. Many of the amphitheater’s stones were used to build the village of El Djem in the 17th century. Continue to the Museum, with its fine collection of mosaics.

Disembark in Hammamet and travel to storied Carthage, founded by Phoenicians in the 9th century B.C.The site includes several Phoenician remains, such as Tophet, the sanctuary of the gods Tanit and Baal, as well as many monuments from the Roman period. After lunch, visit the Bardo Museum, world-renowned for its spectacular collection of Roman mosaics, and enjoy time at leisure visiting the Medina and its souks. Overnight in Tunis at The Sheraton Hotel.

Transfer to Tunis’s airport for the return flight to the U.S.