Madagascar to Mauritius: Islands of the Indian Ocean 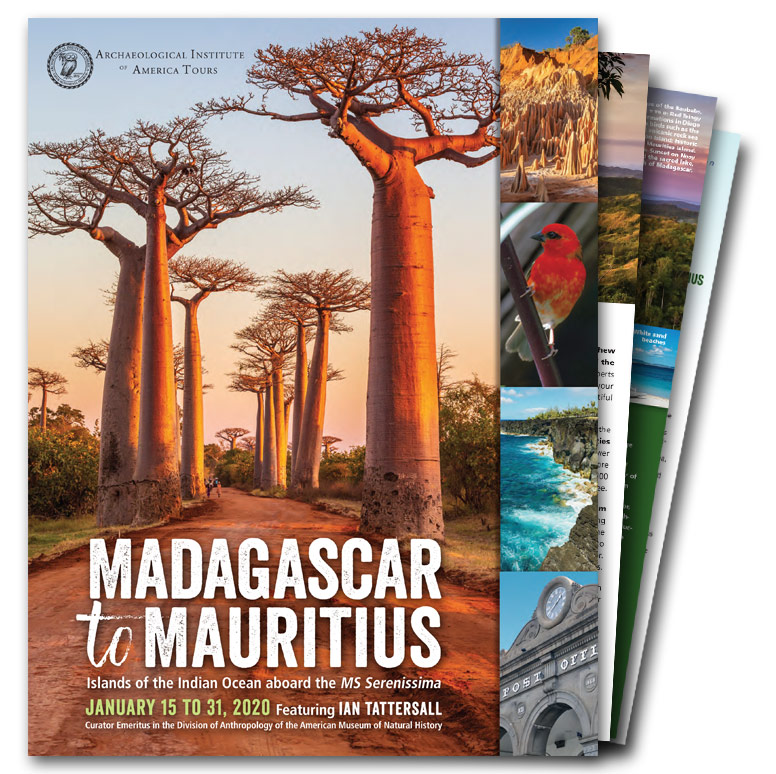 You are invited to join paleoanthropologist Ian Tattersall on an extraordinary cruise from Madagascar to Mauritius aboard the elegant, 53-cabin MS Serenissima. While archaeological sites are not the focus of this AIA-sponsored program, this is a splendid opportunity to travel and learn about human origins with Dr. Tattersall, our AIA lecturer and host, who is one of the world’s leading experts on the hominid fossil record. Ian is a specialist in the biology and evolution of the primates of Madagascar, has carried out extensive fieldwork on the living lemur fauna of Madagascar, and also has done field research on the macaque monkeys of Mauritius.

Madagascar is a global treasure of nature: often called the “eighth continent,” it is the fourth-largest island in the world. It is home to 5% of the world’s plant and animal species that have developed in splendid isolation and exist nowhere else on Earth. With no fewer than six different climatic zones, the island’s array of flora and fauna includes baobab trees; more than 300 species of reptiles; and more than 200 species of birds. Madagascar’s more than 100 known species of lemur are some of the most extraordinary animals you could ever hope to see, and our AIA lecturer and host has a lemur named for him (Propithecus tattersalli)!

To maximize your time in Madagascar, this expedition begins with a private charter flight from Johannesburg, South Africa, to Toliara, Madagascar, thus avoiding the two-day crossing by ship of the Mozambique Channel. Enjoy 11 days exploring Madagascar’s numerous marine reserves and national parks. Then arrive at Réunion Island, a paradisiacal French outpost, to explore its white-sand beaches, spectacular dormant volcanoes, and vibrant Creole character. Disembark on the island of Mauritius, taking in the island’s cultural riches and geologic wonders. Choose from two optional, pre-cruise extensions in South Africa, one with a paleoanthropology focus that includes Sterkfontein Caves and is accompanied by Ian Tattersall, and the other a safari near Kruger National Park; and/or a choose a post-cruise opportunity to lengthen your stay on Mauritius.

OPTIONAL PRE-CRUISE EXTENSIONS January 12 to 16
Begin your journey with an earlier arrival in South Africa and a choice of two amazing experiences:

GREATER KRUGER NATIONAL PARK
A memorable stay at Ngala Game Reserve, adjacent to Kruger National Park in South Africa, to search for the “Big Five” and other wildlife on game drives aboard open-top safari vehicles.
CRADLE OF HUMANKIND
A visit to the Sterkfontein Caves and Maropeng Visitor Center in the UNESCO-listed Cradle of Humankind anthropological site near Johannesburg, joined by Dr. Ian Tattersall.

OPTIONAL POST-CRUISE EXTENSION January 30 to February 2
MAURITIUS
Extend your stay for further exploration of the lush rain forests and white sand beaches of Mauritius. During your three-day stay, discover Íle aux Aigrettes, one of the last sanctuaries for rare Mauritian wildlife, including the giant aldabra tortoise (below) and the ornate day gecko. Also
learn about the island’s long colonial history and enjoy snorkeling in the crystal blue water.

Further details and pricing will be sent to confirmed participants.

For complete pricing, cabin information, and a detailed itinerary, download the brochure.