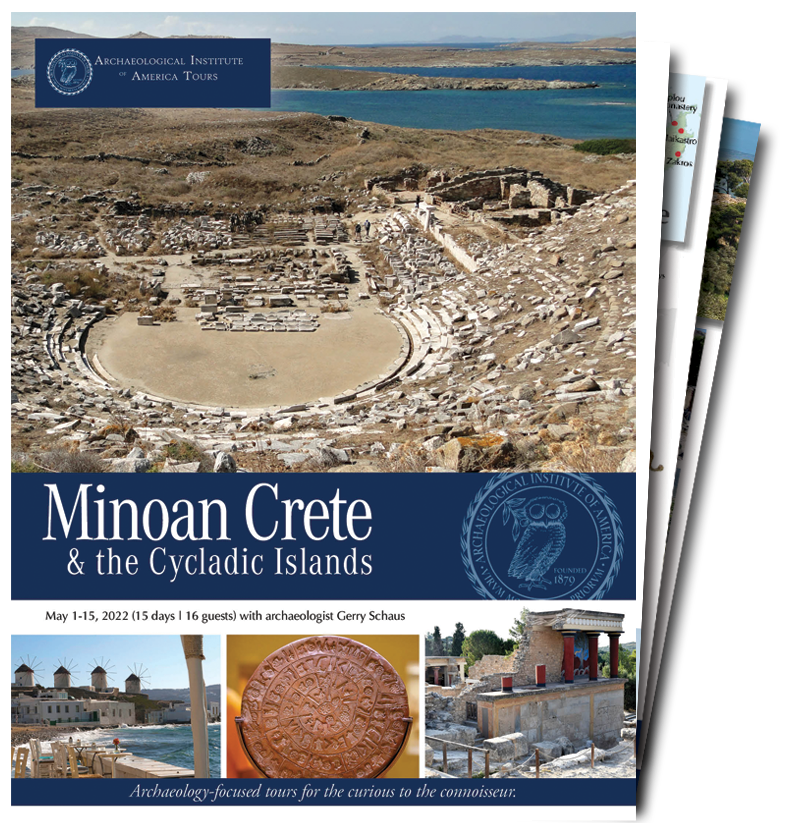 This tour is also available for departure in October 2021 lead by Joanne Murphy. – Learn more

Step back in time to explore the island of Crete, center of the Minoan civilization during the Bronze Age, as well as the nearby Cycladic Islands of Santorini, Mykonos, and Delos. Marvel at the physical evidence of this first advanced civilization in Europe, which created palace complexes, stunning works of art, a unique writing system (called Linear A), and an extensive trade network. You will stay in comfortable, four- and five-star hotels, perfect for exploring or just relaxing, with nine nights on Crete in the capital city of Heraklion, in the traditional village of Sfaka Sitias, and in the coastal town of Agios Nikolaos; plus two nights on whitewashed Santorini and two nights on chic Mykonos.

Single room supplement will be charged when requested or required (limited availability). With fewer than 9 participants, a small group surcharge may be added.

Minoan Crete and the Cycladic Islands - AIA Tours, Travel with the Archaeological Institute of America

Monday, May 2: Arrive Heraklion | Private transfer to hotel | PM at leisure
Upon arrival at Heraklion’s Nikos Kazantzakis International Airport (HER), you are met for a private transfer to our hotel. Enjoy some time to relax and settle in. Dinner is on your own. Overnight at the 5-star Megaron Hotel (or similar) for four nights.

Tuesday, May 3: Heraklion Archaeological Museum | Welcome dinner
This morning, after an introductory lecture, we tour the celebrated Heraklion Archaeological Museum, which houses the world’s finest collection of Minoan art and artifacts. After lunch, the rest of the afternoon is yours to explore Heraklion, Crete’s largest city. Wander through the “old city,” surrounded by fortification walls initially built by the Arabs and later reinforced in the 15th century by the Venetians. We gather this evening for a welcome drink and dinner. (B,L,R,D)

Wednesday,May 4: Phaistos | Agia Triada | Voroi: Museum of Cretan Ethnology | Heraklion
Begin the day with a visit to the ruins of the Minoan palace at Phaistos, a center of Minoan civilization that was destroyed in the 15th century B.C. and one of four recognized major Minoan palaces in eastern Crete. (We will also visit the others—Knossos, Malia, and Zakros—over the next few days.) Continue on to the nearby Minoan “royal villa” of Agia Triada. After lunch we tour the Museum of Cretan Ethnology in Voroi to learn more about the people who have called this island home. This evening, we dine together at one of Heraklion’s local restaurants. (B,L,D)

Thursday, May 5: Tylissos | Prinias Sanctuary | Gortyn | Heraklion
This morning we drive to the archaeological site at Tylissos, where we find the ruins of three luxurious Minoan houses decorated with frescoes and tablets, and outfitted with a water supply system that attests to the city’s importance at one time. We then continue on to the peak sanctuary of Prinias, whose 7th-century B.C. Temple A is the earliest known sculpture-decorated building in ancient Greece. This afternoon we visit the famous Greco-Roman site of Gortyn, which became the dominant city in the region after Phaistos fell, later became Roman and was the first city on Crete to accept Christianity, and persisted into the 9th century A.D. Return to our hotel in Heraklion, where the balance of the day is at leisure to explore on your own before we move on tomorrow. (B,L)

Friday, May 6: Knossos | Archanes | Malia | Sfaka Sitias
Set out this morning for a visit to the legendary, partially-reconstructed Minoan palace at Knossos, rich in imagination thanks not only to its associated myth of the Minotaur and labyrinth but also to the excavation and reconstruction efforts of Sir Arthur Evans in the early 20th century. We then drive to the traditional village of Archanes and visit its small Archaeological Museum to get insights into the daily life of the Minoans. We drive east along Crete’s northern coast, stopping to explore the ruins of the Minoan palace at Malia, before arriving in Sfaka Sitias, where we check-in to our hotel. Overnight at the 4-star Cressa Ghitonia Village (or similar) for two nights. (B,L,D)

Saturday, May 7: Archaeological Museum of Sitia | Zakros | Palaikastro | Toplou Monastery | Sfaka Sitias
Today we spend a full day exploring eastern Crete, beginning with Sitia’s little-visited archaeological museum, whose most impressive artifacts are from the Minoan palace at Zakros and the Minoan city of Palaikastro, both of which we visit after the museum. End the day at the imposing, 15th-century Toplou Monastery, which houses important frescoes, icons, and a museum of religious objects. Return to our hotel for an evening at leisure. (B,L)

Sunday, May 8: Chamezi | Mochlos | Vasiliki | Agios Nikolaos
This morning we drive to the site of Chamezi, beautifully situated on a hill, where we find the only known remains on Crete of an oval (a mix of rectangular and circular building types) Minoan house, dating to 2100–2000 B.C. We then take a short boat ride to the island of Mochlos, where complex archaeological remains ranging from 3000 B.C. to the 10th century A.D. have been found, including a Minoan town (c. 1700-1430 B.C.) and a Mycenaean village and cemetery (c. 1400-1250 B.C.). We return by boat to Crete proper and, after lunch, we explore the ruins of Vasiliki, one of the first Minoan settlements with town planning. Continue on to the coastal town of Agios Nikolaos, where we check-in to our hotel and gather for dinner. Overnight at the 4-star Candia Park Village hotel (or similar) for three nights. (B,L,D)

Monday, May 9: Gournia | Kritsa | Agios Nikolaos
After breakfast, we drive to the well-excavated and -preserved Minoan town of Gournia, where we may best envision life in a Late Bronze Age (c. 1500 B.C.) town as we stroll cobbled streets among the ruins of some 50 houses, a small Minoan palace, and a cemetery. This afternoon we stop in Kritsa to visit the tiny Church of Panagia Kera, which houses Crete’s best-preserved Byzantine frescoes, some as old as the 13th century, before returning to our hotel in Agios Nikolaos. Dinner is at leisure. (B,L)

Tuesday, May 10: Lato | Greek cooking class | Spinalonga | Agios Nikolaos
Begin the day with an exploration of the ancient, fortified, hilltop city of Lato, one of the best-preserved sites on Crete that postdates the Minoan era. In fact, this Dorian Greek site dates back to the 7th century B.C., and was in use until approximately the 2nd century A.D. Continue on to the town of Loumas, where we will partake in a traditional Greek cooking class that will include lunch. Afterward, we take a short boat ride to the picturesque island of Spinalonga, which is home to a 16th-century Venetian fortress and was a leper colony for the first half of the 20th century. Return to Crete proper by boat, where the balance of the day is at leisure in Agios Nikolaos. (B,L)

Wednesday, May 11: Heraklion | Ferry to Fira, Santorini | PM at leisure
This morning we return to Heraklion to catch a high-speed ferry to Santorini (a.k.a. Thera), one of the world’s most breathtaking islands, dotted with whitewashed houses and churches perched on cliffs nearly 1,000 feet above the sea and its huge, drowned volcanic crater (caldera). After arriving at our hotel on the outskirts of the capital, Fira, lunch and the afternoon are at leisure; explore independently the nearby town center’s narrow cobbled streets lined with shops and/or enjoy our resort’s amenities and views. We dine together at a local restaurant this evening. Overnight at the 4-star El Greco Resort & Spa (or similar) for two nights. (B,D)

Thursday, May 12: Akrotiri | Fira: Museum of Prehistoric Thera
Spend the morning exploring Santorini’s “Pompeii,” the haunting Minoan town of Akrotiri, preserved for millennia under volcanic ash, now excavated and protected with a roof. Navigate the town via wooden walkways among three-storey buildings and traces of life from before the eruption. Drive to Fira for lunch and to explore the superb Museum of Prehistoric Thera, which displays striking frescoes and various artifacts from Akrotiri. The balance of the day is at leisure to enjoy Fira and/or our resort’s amenities. (B,L)

Friday, May 13: Ferry to Mykonos
After a leisurely morning at our resort (pending the ferry schedule), we take a high-speed ferry from Santorini to the island of Mykonos. Our hotel is located in the center of the island’s capital of Chora. The balance of the day is at leisure to enjoy our hotel’s amenities and/or explore independently Chora’s many upscale shops, art galleries, and seaside cafés. Overnight at the 5-star Semeli Hotel (or similar) for two nights. (B)

Saturday, May 14: Delos | Mykonos: PM at leisure | Farewell dinner
Take a short ferry ride to the nearby sacred island of Delos, legendary birthplace of the twin gods Apollo and Artemis and today a UNESCO World Heritage site. Delos was considered the most sacred island in the ancient Aegean, and the entire, albeit small, island is an archaeological site. After a thorough walk around the ruins of the sanctuary of Apollo and the town, as well as a visit to the small site museum, we return to Mykonos by ferry. Enjoy lunch and the afternoon at leisure. In the evening, we gather one last time for a farewell dinner. (B,D)