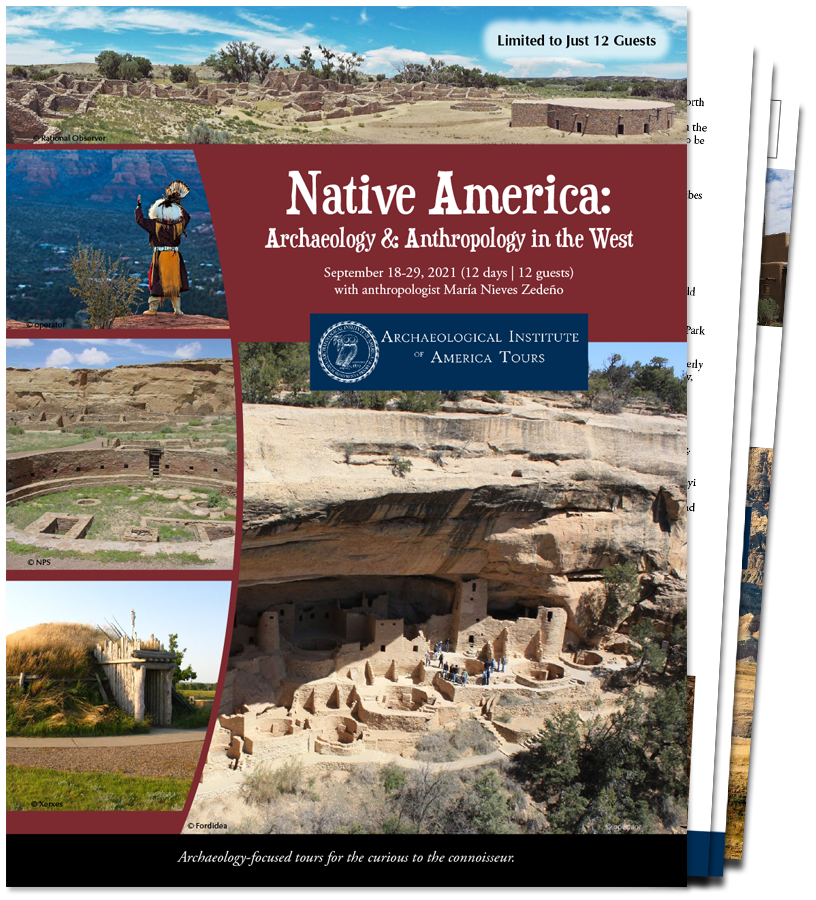 NOTE: This tour has been cancelled for the 2021 departure. For more information on tour in this region in the future, contact us at 800-748-6262 or aia@studytours.org

Join us on an American adventure, from the plains of North Dakota to the pueblos of New Mexico, as we explore Native American archaeological and historical sites as well as expansive National Parks. Experience this part of the country in a different way, gaining new perspectives and learning about the histories of indigenous peoples, in the company of AIA lecturer and host María Nieves Zedeño, a North American archaeologist, plus local guides and your tour manager.

Single room supplement will be charged when requested or required (limited availability).
With fewer than 10 participants, a small group surcharge may be added.

Saturday, September 18, 2021: Arrive Bismarck, ND | North Dakota Heritage Center & State Museum | Welcome dinner
Arrive at Bismarck Airport (BIS) and make your way to Radisson Hotel Bismarck. This afternoon we gather with our AIA lecturer and our local guide for a visit to the North Dakota Heritage Center & State Museum, accompanied by an enrolled member of the Standing Rock Sioux Tribe. Enjoy a welcome dinner at a local restaurant. Overnight at the 3-star Radisson Hotel Bismarck for two nights. (D)

Sunday, September 19: Knife River Indian Villages National Historic Site | Double Ditch Indian Village | Chief Lookings’ Village | Bismarck
This morning we drive to Knife River Indian Villages National Historic Site, a National Park that offers the opportunity to explore the lives of the Northern Plains Indians on the Upper Missouri River. Learn about the history and culture of the Hidatsa people before walking a loop trail (approx. 1.3 miles) to see the remains of the Awatixa Xi’e Village and the Awatixa Village. After lunch at a local restaurant, we stop at the archaeological site of Double Ditch Indian Village, a large earth lodge once inhabited by the Mandan Indians. Continue driving to Chief Lookings’ Village, a historic archaeological site located in Pioneer Park. Arrive back at our hotel in Bismarck. Take a short walk to have dinner at Peacock Alley, a national-award-winning restaurant. (B,L,D)

Monday, September 20: Fort Abraham Lincoln State Park | Huff Indian Village State Historic Site | Standing Rock Reservation, SD | Vore Buffalo Jump, WY | Keystone, SD
We check out of our hotel early this morning to begin our journey to Keystone, South Dakota. Along the way we will stop at Fort Abraham Lincoln State Park, once a Mandan settlement before becoming a military post. We continue with a lovely drive on the Standing Rock National Native American Scenic Byway stopping at the Huff Indian Village State Historic Site, a classic prehistoric Mandan settlement. We make our way to the Standing Rock Reservation, home to the Lakota and Dakota people, where we visit the original burial site of Sitting Bull. Enjoy a locally-cooked lunch at the visitors center. Drive across the border into Wyoming to see Vore Buffalo Jump, a natural sinkhole that indigenous people used in buffalo hunting. Continue driving to Keystone, tucked deep in the Black Hills, where we check-in to our hotel and have dinner. Overnight at the 3-star K Bar S Lodge for two nights. (B,L,D)

Tuesday, September 21: Wind Cave National Park | Wounded Knee | Keystone
After breakfast this morning we gather on the hotel terrace to enjoy the great view of Mount Rushmore while discussing its history and meaning. Then we set out on a drive through Badlands National Park (“mako sica” as it is known to the Lakota people) to Wind Cave National Park, an important location in the Emergence Story in Lakota culture. After lunch at Red Cloud School, we will stop to visit the site of the Massacre of Wounded Knee. Return to our hotel in Keystone, and gather for dinner. (B,L,D)

Wednesday, September 22: Black Hills Institute of Geological Research | Pawnee National Grassland, CO | Denver
Depart Keystone for Denver, Colorado stopping along the way to meet with staff at the Black Hills Institute of Geological Research who prepare fossils, fossil casts, and mineral specimens for research, teaching, and exhibit. Their best-known fieldwork in recent years is the excavation of several Tyrannosaurus rex skeletons, including that of SUE, which now resides in Chicago’s Field Museum. After a short break for lunch we will drive to Pawnee National Grassland and meet with the Office of the State Archaeologist of Colorado (OSAC) which has been conducting surveys of sections of the park ahead of oil and gas expansion. Continue on to Denver, where dinner and the evening are at leisure. Overnight at the 4-star Renaissance Denver Downtown City Hotel. (B,L)

Thursday, September 23: Denver Museum of Nature & Science | Great Sand Dunes | Del Norte
This morning we explore the permanent North American Indian Cultures exhibition at the Denver Museum of Nature & Science. Drive to Fairplay for a quick lunch, and then continue on to the spectacular Great Sand Dunes National Park and Preserve, home to the highest sand dunes in North America, which contains some of the oldest-known archaeological sites in the U.S. End our day in Del Norte, where we check-in to our hotel and gather for dinner. Overnight at the 3-star Windsor Hotel. (B,L,D)

Friday, September 24: Chimney Rock | Ignacio: Southern Ute Museum
This morning we depart Del Norte for Chimney Rock, an intimate, off-the-beaten-path archaeological site located at the southern edge of the San Juan Mountains in southwestern Colorado. Take a short walk to see the excavated Great Kiva (circular ceremonial chamber), pit house, and several other unexcavated structures. After lunch at the Bottom Shelf Brewery, in the heart of Pine River Valley, we drive to Ignacio and visit the Southern Ute Museum, which is owned and operated by the Southern Ute Indian Tribe and aims to tell the story of the Ute people from prehistory to the modern day. Check-in to our hotel in Ignacio, on the Southern Ute Indian Reservation, where dinner and the evening are at leisure. Overnight at the 3-star
Sky Ute Casino and Resort for two nights. (B,L)

Saturday, September 25: Mesa Verde National Park | Ute Mountain Ute Tribal Park | Ignacio
This morning we visit Mesa Verde National Park, a UNESCO World Heritage Site, where the Ancestral Pueblo people lived from A.D. 600 to 1300. The Park protects nearly 500 archaeological sites, including 600 cliff dwellings. We will explore the Cliff Palace, the largest cliff dwelling in North America; Spruce Tree House, the third largest cliff dwelling in North America; and Sun Temple, classified by modern Pueblo Indians as a ceremonial structure. Next we visit the Ute Mountain Ute Tribal Park Visitor Center, where a Ute tribal member will lead us on a tour of the park, which includes hundreds of surface sites and cliff dwellings. Return to our hotel in Ignacio, and gather for dinner. (B,L,D)

Sunday, September 26: Aztec Ruins National Monument, NM | Chaco Culture National Historic Park | Santa Fe
Check out of our hotel and drive into New Mexico to visit the Aztec Ruins National Monument, part of the Chaco Culture UNESCO World Heritage Site. It was built and occupied more than 900 years ago, and was in use for more than 200 years. Ancestral Puebloans left behind several multi-story buildings called “great houses,” as well as smaller structures. From here we will spend time exploring Chaco Culture National Historic Park (sometimes referred to as Chaco Canyon), a major center of Ancestral Puebloan culture a thousand years ago. Points of interest are the great houses of Pueblo Bonito and Chetro Ketl, and the smaller, more typical Casa Rinconada. Continue driving to Santa Fe, where we check-in to downtown Santa Fe’s only Native American-owned hotel. Gather for dinner. Overnight at the 4-star Hotel Santa Fe for three nights. (B,L,D)

Monday, September 27: Bandelier National Monument | Pojoaque Pueblo | Santa Fe
In the late 1800s, the Archaeological Institute of America provided support for its first archaeological excavation when it assisted Adolph Bandelier with his research at prehistoric sites in the southwestern U.S. This morning we visit the Tsankawi section of Bandelier National Monument and follow the hiking loop (approx. 1.5 miles) to the Tyuonyi pueblo, Talus House, and Long House cliff dwellings. The trail includes cavates (cuts in soft rock), petroglyphs, and the Ancestral Pueblo village of Tsankawi. (Note that climbing ladders is a required activity at this site.) Our next stop is the Pojoaque Pueblo and the Poeh Cultural Center, where we will meet with a member of the Pueblo People whose work on language revitalization in Pojoaque Pueblo helps provide a history of the Pueblo and their current struggles. Return to Santa Fe, where the balance of the day is at leisure. (B,L)

Tuesday, September 28: Pecos National Historical Park | Santa Fe: School for Advanced Research, Institute of American Indian Arts | Farewell dinner
This morning we drive to Pecos National Historical Park, which showcases the cultural exchange and geographic features that played crucial roles in the rich history of the Pecos Valley. We visit the ruins of Pecos Pueblo, also known historically as Cicuye, located in the Park. We return to Santa Fe to visit the School for Advanced Research, originally known as the School of American Archaeology, which was established by the Archaeological Institute of America in 1907. Time-permitting, we will also visit the Institute of American Indian Arts (IAIA), one of 37 tribal colleges located in the U.S. Return to our hotel and gather for a farewell dinner. (B,L,D)