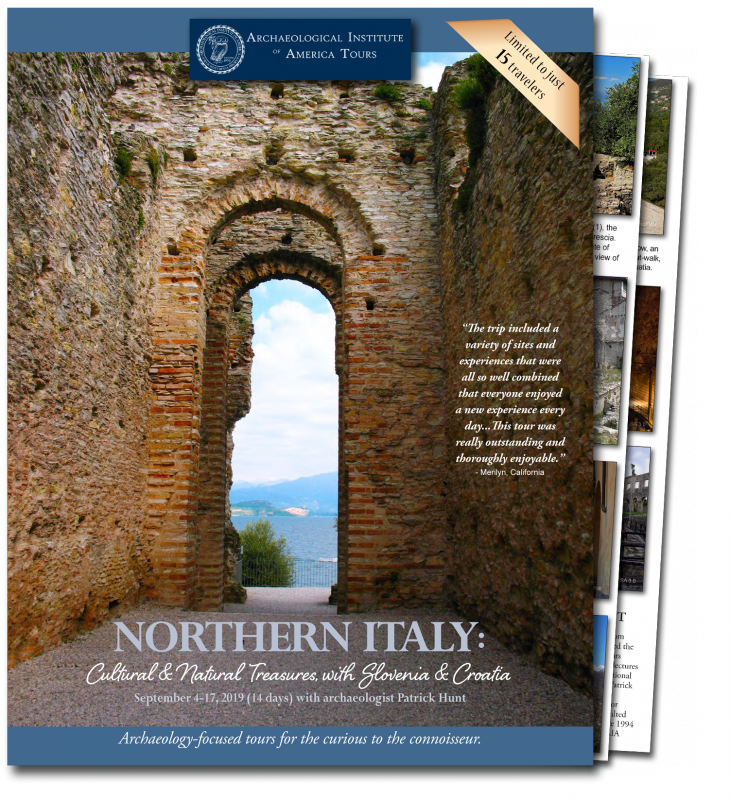 Traverse northern Italy, with the grand Italian Alps as your backdrop, enjoying the depths of its history and the great diversity of architecture, traditions, and gastronomy found in three distinct regions: Lombardy, Veneto, and Friuli Venezia Giulia. On this west-east journey from Milan to Trieste you will explore classic old towns and discover off-the-beaten-track sites, including a stop at the site of Hannibal’s first major victory in Italy; visits to Roman villas and temples at Sirmione, Desenzano, and Brescia; and day trips into both Slovenia and Croatia (for the impressive Roman site of Pula). Visit six UNESCO World Heritage sites: Valcamonica’s famous prehistoric petroglyphs, Roman and early Christian Aquileia, the well-preserved city of Verona, landmarks of Lombard Italy in Cividale del Friuli, an example of prehistoric pile dwellings at Lucone di Polpenazze, and Slovenia’s astounding Škocjan Caves with their underground river canyons and waterfalls. Along the way, you will be treated to insightful discussions with your AIA lecturer/host and a variety of striking vistas: plains, lakes, mountains, and the Adriatic Sea; plus enjoy delicious cuisine and an ideal touring pace (including two hotel nights in Milan, five on Lake Garda, and five in Trieste). Maximum of 15 travelers.

Single room supplement will be charged when requested or required. With fewer than 10 participants, a small group surcharge may be added.

Wednesday, September 4, 2019: Depart Home for Milan, ITALY
Thursday, September 5: Arrive in Milan | Private transfer to hotel | City center walking tour | Welcome dinner
Upon arrival at Milan Malpensa Airport (MXP), you will be met and transferred to our hotel in the heart of Milan’s historic district. After some free time to relax, take a short orientation tour of the city center by foot, including a stop at the Gothic Cathedral (Duomo). Gather for a welcome aperitivo and dinner this evening. Overnight for two nights at the 4-star hotel The Square Milano Duomo. (D)

Friday, September 6: AM at leisure | PM Milan tour
Enjoy a leisurely morning to relax or explore local sites on your own. After an independent lunch, meet your expert local guide and enjoy a special tour of the hidden archaeological treasures of Milan, such as the Imperial Palace, symbol of Mediolanum (ancient Milan); the Archaeological Museum, which incorporates substantial remains of the ancient city wall and houses excellent Roman and medieval collections; and the medieval church of San Maurizio al Monastero Maggiore, with its well-preserved frescoes. Dinner is on your own. (B)

Saturday, September 7: Hannibal battle site | Cremona’s Museo del Violino |
Desenzano del Garda
This morning we drive to the approximate location of Hannibal’s Battle of the Trebbia River (December 218 B.C.), southwest of Piacenza (ancient Placentia) in the shallow hills around Rivergaro, just before the Trebbia River flows into the Po River. After a look at the landscape and a discussion with AIA lecturer/host Patrick Hunt about the battle, Hannibal’s first major victory in Italy, we will visit (time-permitting) Piacenza’s Museo Civico di Palazzo Farnese. After lunch in nearby Cremona, the 16th- to 18th-century center of violin-making, visit the Museo del Violino. Continue on to Desenzano del Garda, on the southern shore of Lake Garda, and check-in to our hotel. Gather for dinner this evening. Overnight for five nights at the 4-star Palace Hotel Desenzano. (B,L,D)

Sunday, September 8: Sirmione | Grotte di Catullo | Desenzano del Garda | Gorghi’s Roman furnaces
Start the day with a walk in Sirmione, at the northern tip of Lake Garda’s narrow peninsula, where we find the remains of a large, 1st-century A.D. Roman villa and baths. Known for centuries as the Grotte di Catullo, this is the largest domestic villa in northern Italy. After a visit of the small site museum and lunch, take a short ferry boat ride back to Desenzano del Garda. Here we find a well-conserved example of a Roman villa which, although built more than 2,000 years ago, was renovated and completed between the 2nd and 4th centuries A.D. Wooden walkways take us through the villa, over a variety of colorful floor mosaics. Drive to nearby Gorghi to see the Fornaci Romane (Roman furnaces)—six restored brickworks dating back to the 2nd century A.D. Return to Desenzano del Garda for an evening at leisure. (B,L)

Monday, September 9: Brescia | Desenzano del Garda
This morning we take a motor coach to the city of Brescia (ancient Brixia), whose old town was radically restored and re-opened in 2015. Our visit will take us on a journey through time, from the pre-Roman era to the Renaissance. The town’s Roman ruins include Emperor Vespasian’s impressive 1st-century A.D. temple (Tempio Capitolino), plus a 15,000-seat theater, forum, and a stretch of the paved decumanus (east-west oriented road). Later monuments include the 11th-century Duomo Vecchio (built over a 6th-century church); and the Monasterio di Santa Giulia and Basilica di San Salvatore, which houses the Museo dell Città with its range of collections from prehistory to the Venetian era. After an independent lunch, return to Desenzano for the balance of the day at leisure. (B)

Tuesday, September 10: Valcamonica | Desenzano del Garda
Today we head towards the heart of the Alps for Valcamonica (Valle Camonica), the first Italian site to be included on UNESCO’s World Heritage List. This valley is home to more than 140,000 prehistoric rock engravings (petroglyphs) that span approximately 56 miles and 8,000 years. Depending on physical fitness, we will split into two groups in order to explore the area at our own paces. Not to be missed is the Minerva Sanctuary, a Roman building with mosaics and painted walls located in a place of stunning natural beauty on the Oglio River. Lunch and dinner are on your own. (B)

Wednesday, September 11: Peschiera del Garda | Arilica | Sigurtà Garden Park | Lucone di Polpenazze | Desenzano del Garda
After breakfast we take a ferry to Peschiera del Garda for a walking tour of this charming lake town and a visit to the ruins of the ancient town of Arilica, dating back to the 1st century B.C. Continue on to Valeggio sul Mincio for a walk through the Sigurtà Garden Park, one of the most interesting in Italy for its botanical variety. At lunch we will enjoy a local specialty: tortellini di Valeggio. This afternoon we visit Lucone di Polpenazze, one of the 19 Italian sites (among the 111 total sites) comprising the UNESCO World Heritage site of Prehistoric Pile Dwellings (stilt houses) around the Alps. Pile dwelling settlements were in use until 500 B.C. and are located underwater or on the edge of water bodies (Italy’s largest concentration of such dwellings is in the Lake Garda area). Return to Desenzano for dinner. (B,L,D)

Thursday, September 12: Verona | Trieste
Today we check out of our hotel and take a motorcoach to Trieste, our home base for the balance of our journey. On the way, stop in Verona to visit the 1st-century A.D. Roman arena, possibly the best-preserved ancient amphitheater, and for a walking tour of the hidden gems of Verona (the city is a UNESCO World Heritage site). Our special lunch today is a typical Veronese meal at Ristorante Maffei, which was built on the site of the 1st-century B.C. Roman Capitol, part of which is visible in its wine cellar. Continuing on to Trieste, we check-in to our hotel. Dinner is on your own. Overnight for five nights at the 4-star Grand Hotel Duchi d’Aosta. (B,L)

Friday, September 13: Aquileia | Trieste
Drive this morning to Aquileia, founded by the Romans in 181 B.C., which (as a major trading link to the East) became one of the Roman Empire’s most important cities. The archaeological area and Patriarchal Basilica are a UNESCO World Heritage site. Most of ancient Aquileia remains unexcavated, and the basilica’s 4th-century mosaics (approx. 7,000 square feet) are extraordinary. Visit the National Archaeological Museum of Aquileia, and then enjoy some time at leisure for an independent lunch. Return to Trieste this afternoon and gather this evening for dinner. (B,D)

Saturday, September 14: Cividale del Friuli | Winery visit | Trieste
Seven groups of important Lombardic buildings throughout Italy comprise a UNESCO World Heritage site (Longobards in Italy: Places of the Power [A.D. 568-774]). Today we learn how the Lombards influenced Italian history, visiting Cividale del Friuli—the region’s most outstanding Lombard capital, established as a duchy in A.D. 569, and still today one of the region’s most picturesque towns. Our city tour includes the Tempietto Longobardo (a “little temple” with superb artwork), the 8th-century Altar of Ratchis in the duomo museum, and the necropolis. Continue on to a vineyard in the Colli Orientali del Friuli wine region, where we learn about and taste some of their wines. We return to Trieste, where dinner is on your own. (B,L)

Sunday, September 15: Škocjan Caves Regional Park, SLOVENIA | Ljubljana | Trieste, ITALY
The history of Slovenia, just a few miles from the city of Trieste, is intertwined with that of the major European cultures. This morning we drive across the border into Slovenia and visit Škocjan Caves Regional Park, a natural (rather than cultural) UNESCO World Heritage site comprising a system of limestone caves, many waterfalls, and an underground chamber. There is archaeological evidence of human occupation (settlement, burial, and ritual) in the caves dating back to the prehistoric era. We continue on to Ljubljana, Slovenia’s capital city and Green Capital of Europe for 2016, whose city center includes the remains of the Roman city of Emona, with one of the longest Roman city walls in central Europe. After a group lunch, the afternoon is at leisure in Ljubljana. We return to Trieste, where dinner is on your own tonight. (B,L)

Monday, September 16: Pula, CROATIA | Trieste, ITALY | Farewell dinner
Drive to Pula (ancient Polensium), on Croatia’s Istrian Peninsula, which was an important Roman administrative center. In the heart of modern Pula we visit the imposing, 1st-century A.D. Roman amphitheater, the only remaining Roman amphitheater to have four side towers and all three architectural orders entirely preserved; the Golden Gate, a triumphal Arch erected by the prominent Roman Sergi family in the 1st century A.D.; and the Temple of Augustus in the Roman Forum—the center of daily life in ancient Rome. Take some time at leisure for lunch and to explore Pula at your own pace. We return to Trieste and gather this evening for a farewell dinner. (B,D)