The Best of Ancient Peru 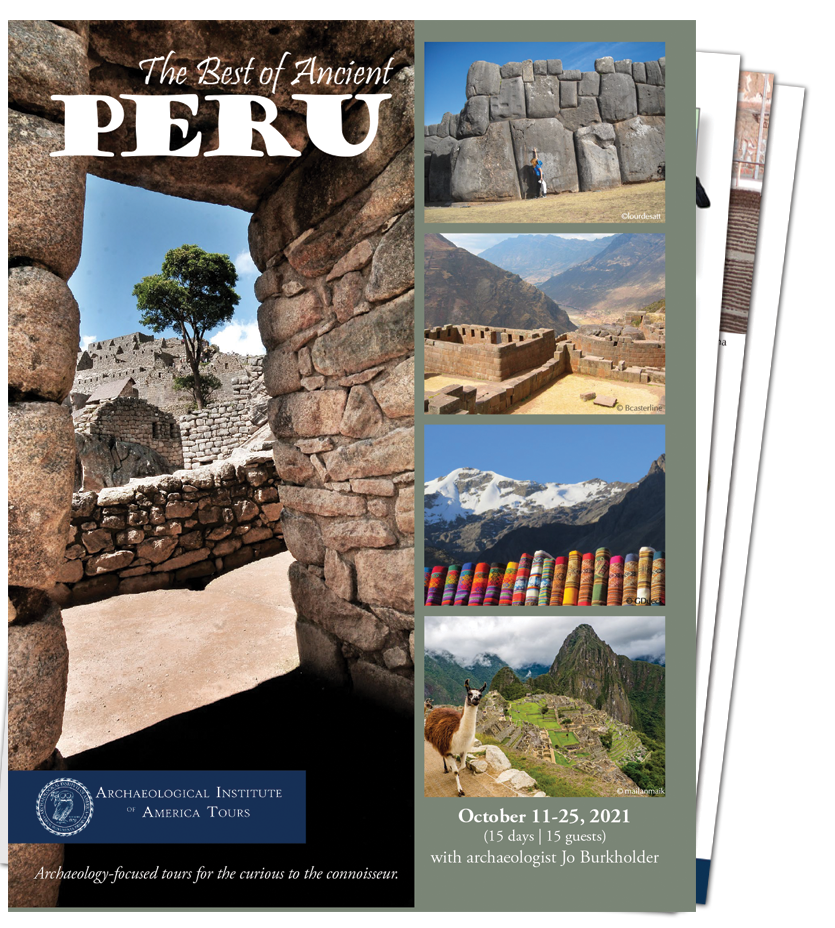 Highlights include two visits to Machu Picchu; the impressive Inca fortress of Sacsayhuaman; ruins of the Inca town of Ollantaytambo; the renowned Moche tombs of Sipán at Huaca Rajada; and the UNESCO World Heritage sites of Lima, Cuzco, and Chan Chan, one of South America’s largest pre-Columbian sites. Relax at your 4- and 5-star hotels, conveniently located so you can explore the local culture, with three nights each in Chiclayo, the Sacred Valley, and Cuzco. Travel with a maximum of just 15 guests.

“What I most appreciated about the trip was the teaching and willingness to address questions on the part of Dr. Jo Burkholder. She is certainly a wonderful and gifted educator.” – James, Texas

Single room supplement will be charged when requested or required.
With fewer than 9 participants, a small group surcharge may be added.

The Best of Ancient Peru - AIA Tours, Travel with the AIA

Monday, October 11, 2021 – Fly to Lima, Peru
Depart home on flights to Peru. Upon arrival at Lima’s Jorge Chávez International Airport (LIM), you will be met at the airport and transferred as a group (times TBD) to our hotel. Overnight at the 5-star Casa Andina Premium Miraflores.

Tuesday, October 12 – Lima: Historic center, Larco Museum, welcome lunch | Fly to Trujillo
Gather this morning to meet our lecturer/host and local guide, and set out together for a short walk in Lima’s historic center, a UNESCO World Heritage site, and a visit of the 17th-century San Francisco Church’s convent and its catacombs, which used to be an underground cemetery for Lima’s Christians. We then drive to the Larco Museum, which contains a wonderful collection of pre-Hispanic pottery. A highlight of our visit is a behind-the-scenes tour of the Museum’s storerooms. After a welcome lunch at the Museum’s café, we transfer to the airport in time for a flight to Trujillo. Upon arrival, we transfer the short distance to our hotel in the historic center. Dinner is on your own this evening. Overnight at the 5-star Wyndham Costa del Sol Trujillo Downtown for two nights. (B,L)

Wednesday, October 13 – Huacas del Sol/de la Luna | Chan Chan | Trujillo
Today we visit two of the most important archaeological sites in northern coastal Peru, both of which were the centers of their respective cultures. First visit the Huacas del Sol/de la Luna (Pyramids of the Sun and Moon) complex, which was the most sacred center of the Moche culture, occupied from around the time of Christ until about A.D. 600. After a visit to the site museum and lunch at a beachfront restaurant, we visit the ruins of Chan Chan, once the capital city of the Kingdom of Chimor and today a UNESCO World Heritage site. The huge archaeological site is dominated by several large ciudadelas (royal compounds) surrounded by high walls. Chan Chan covers several square miles and may have been home to more than 30,000 people – perhaps the largest pre-Hispanic site in all of Peru prior to its 15th-century conquest by the Incas. Return to Trujillo, where dinner is on your own. (B,L)

Thursday, October 14 – Huaca Cao Viejo | San Jose de Moro | Zaña | Chiclayo
This morning we drive north to Chiclayo, making several interesting stops along the way. First, visit Huaca Cao Viejo, another Moche period ceremonial center. One of the site museum’s highlights is the tomb (and body) of the Señora de Cao, the highest status female burial ever found in Peru. After touring the museum, walk a few hundred feet to visit the actual Moche pyramid. From the top, we can view several other Moche pyramids as well as the famous Huaca Prieta, a nearby pre-ceramic midden (refuse heap) excavated in the 1940s. After lunch in the town of Pacasmayo, we visit briefly the site of San Jose de Moro, a major Moche period ceremonial center and cemetery. Among the most important discoveries at San Jose de Moro have been multiple tombs of high status priestesses. Our final stop today is a visit to the town of Zaña, which became one of the richest Spanish cities in early colonial Peru. In 1720 the town was wiped out by flooding, and the ruins of its colonial churches still show the high water marks. Continue driving north to our hotel in Chiclayo. Dinner is on your own. Overnight at the 4-star Casa Andina Select Chiclayo for three nights. (B,L)

Friday, October 15 – Ferrenafe: Sican Museum, Tucume Pyramids | Mórrope | Chiclayo
We continue our exploration of the cultures of northern coastal Peru with a visit to the Sican Museum, in the town of Ferrenafe, which focuses on the Sican culture that dominated this region between the end of the Moche culture and the Chimu conquest of the Chiclayo area. We then visit the Tucume pyramids, where there are more than twenty huacas built by the Lambayeque culture. After lunch in the town of Lambayeque, continue on to the traditional village of Mórrope, where residents continue to weave and make pottery using traditional methods. The chapel next to the town’s church is particularly interesting, as it is the earliest surviving Catholic chapel in Peru and was constructed using indigenous techniques. We return to Chiclayo, where dinner is on your own. (B,L)

Saturday, October 16 – Lambayeque: Museum of Royal Tombs of Sipán | Sipán | Chiclayo
Drive to the town of Lambayeque to tour the fantastic Museum of the Royal Tombs of Sipán, which houses much of the material discovered during the first years of excavation at the site of Sipán (Huaca Rajada). Archaeologist Walter Alva’s excavation of the tomb of the Lord of Sipán in 1987 was one of the greatest archaeological discoveries of the 20th century. After lunch at a local restaurant, we drive to the actual site of Sipán, where we climb the huacas and put into context what we saw this morning, and then tour the site museum, where the results of the most recent excavations are displayed. Return to Chiclayo and gather this evening for dinner at a local restaurant. (B,L,D)

Sunday, October 17 – Fly to Cuzco | Chincheros | Urubambaa
This morning we transfer to the Chiclayo airport for our flight to Cuzco, via Lima. Upon arrival, we enjoy a gourmet boxed lunch and drive down into the Sacred Valley. Along the way we stop at a traditional weaving center in Chincheros where we meet the center’s founder, Nilda Callañaupa, and see demonstrations of traditional weaving. Dinner is at our hotel in Urubamba. Overnight at the 5-star Aranwa Sacred Valley Hotel and Wellness for three nights. (B,L,D)

Monday, October 18 – Moray | Maras | Ollantaytambo | Urubamba
Today we head into the hills above the Sacred Valley, stopping first at the archaeological site of Moray, where we find a series of circular terraces whose purpose has been the subject of much debate by archaeologists over the years. Our next stop is at the salt mines at Maras, which have been in use since pre-Hispanic times, where we learn how salt was produced in pre-Industrial times. After lunch at a restaurant in Maras, we visit the town of Ollantaytambo and its Inca temple/fortress. Many of the town’s houses date to the Inca period and are still occupied by local families. A local family will invite us into their home to learn about life in a typical native residence. Return to Urubamba, where dinner is at our hotel this evening. (B,L,D)

Tuesday, October 19 – Pisac | Wayra Ranch | Urubamba
Our destination this morning is the town of Pisac, located up the Urubamba Valley. In the hills above Pisac we visit the Inca archaeological site of the same name, which was most likely a royal estate of the Inca ruler Pachacutec. After a walk through the traditional market in Pisac’s plaza, where many of the vendors will have come down from the surrounding highland communities wearing their native garb, we will visit Wayra Ranch, home to the Peruvian Paso Horse. The horses and their riders will demonstrate their elegant gait to the rhythm of the “Marinera,” a traditional Peruvian dance. After a lunch of Peruvian Creole food we return to our hotel, where the balance of the afternoon is at leisure. Dinner is at our hotel this evening. (B,L,D)
Wednesday, October 20 – Ollantaytambo | Train to Aguas Calientes | Machu Picchu | Aguas Calientes
This morning we take the Vistadome train from Ollantaytambo to Aguas Calientes, where our hotel is only a short walk from the train station. After lunch at our hotel, take a short walk to the shuttle bus for legendary Machu Picchu, a UNESCO World Heritage site. Spend the afternoon exploring the most important parts of the site, until it closes. (Note that most visitors leave by early afternoon, to catch the train back to Cuzco, so in the late afternoon we can enjoy the site with relative peace and quiet.) Return via shuttle bus to Aguas Calientes, where we have dinner at our hotel this evening. Overnight at the 5-star Inkaterra Machu Picchu Pueblo Hotel for two nights. (B,L,D)

Thursday, October 21 – Machu Picchu
We have the opportunity to spend the whole morning exploring Machu Picchu. Those who wish may hike along the Inca Trail to the Sungate (Inti Punku), for a different perspective of Machu Picchu. Return to our hotel for lunch, and enjoy the balance of the afternoon at leisure. Dinner is at our hotel this evening. (B,L,D)

Friday, October 22 – AM at leisure | Train to Ollantaytambo | Cuzco
Enjoy a morning at leisure, or join your guide for a strenuous hike (at additional cost and subject to availability) to the top of Huayna Picchu, overlooking Machu Picchu. After lunch at El Mapi Hotel, we take the Vistadome train back to Ollantaytambo and drive to Cuzco, a UNESCO World Heritage site. Dinner is on your own. Overnight at the 5-star Palacio del Inka Hotel for three nights. (B,L)

Saturday, October 23 – Cuzco: City tour, Casa Concha Museum | Sacsayhuaman | Cuzco
Start the day with a city tour, beginning at the cathedral on the main plaza (which was, itself, part of the Inca central square). Cuzco’s cathedral is considered to be the best repository of colonial art in Peru. Continue on to the Qoricancha (“Temple of the Sun”), which was the most sacred space in Inca Cuzco. The Dominicans built their church atop the Qoricancha, and an earthquake in 1950 destroyed portions of that church, uncovering the Inca walls we see today. Visit the Casa Concha Museum, housing hundreds of artifacts from the 1912 excavations at Machu Picchu, and then drive to Sacsayhuaman, an Inca fortress in the hills overlooking the city. Its size and scope are amazing, particularly the huge stones (many weighing dozens of tons) that were used to build its walls. After a gourmet picnic lunch near Sacsayhuaman, we return to Cuzco for the balance of the day at leisure. (B,L)

Sunday, October 24 – Tipon | Piquillaqta | Raqchi | Cuzco | Farewell dinner
This morning we visit three important archaeological sites south of Cuzco. First is Tipon, an Inca royal estate that is famous for its terraces, stone-lined canals, and fountains. Then visit Piquillaqta, a Middle Horizon center built by people of the Wari (Huari) culture. It is a huge site, with lots of standing walls of houses and storehouses, and it is the only major pre-Inca site near Cuzco. After lunch at a local restaurant we drive to the village of Raqchi, built around the Inca Temple of Viracocha. Return to Cuzco and gather this evening for a farewell dinner. (B,L,D)

Monday, October 25 – Fly to Lima | Fly home
Transfer this morning to the Cuzco airport for our group flight to Lima, connecting to independent flights homeward. (B)