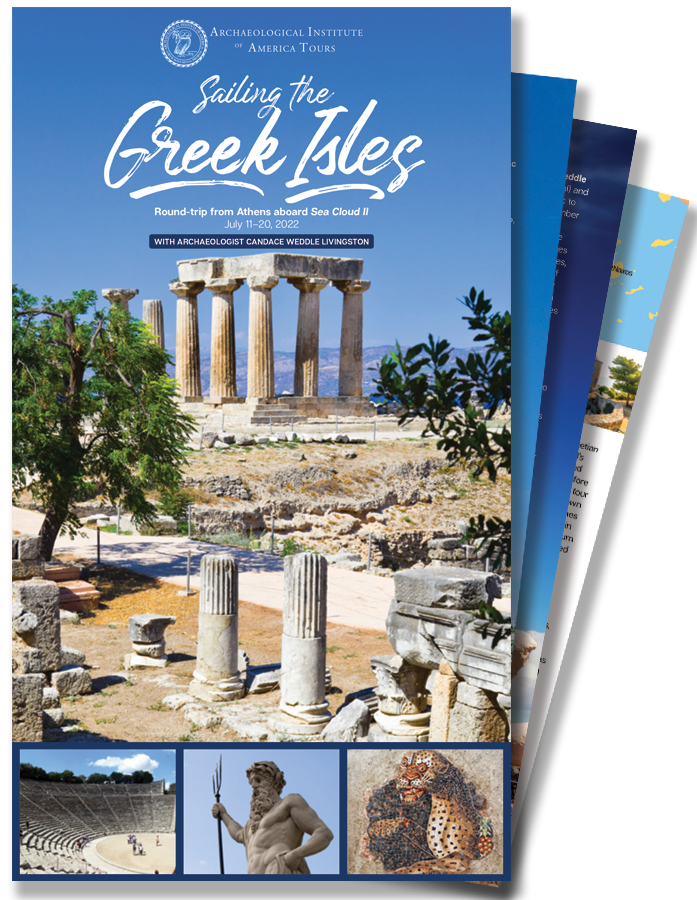 Round trip from Athens aboard the Sea Cloud II

Known as the “Cradle of Western Civilization,” Athens, the Peloponnese, and small islands of the Aegean deliver an enticing blend of history, diverse cultural influences, stunning natural beauty, and archaeological gems. There is hardly a better way to visit this part of the world than in the company of Archaeological Institute of America lecturer and host Candace Weddle Livingston, aboard the 47-cabin Sea Cloud II, with an itinerary designed to allow ample time for sailing and a robust lecture program. Spend a night in Athens at the venerable Hotel Grande Bretagne on Syntagma Square before embarking Sea Cloud II in Piraeus for a seven-night private charter. Sail to the isle of Delos, mythological birthplace of Apollo and a major religious center of the ancient world, today a UNESCO World Heritage Site. Continue sailing to the isles of Naxos, Milos, Kythera, and Hydra, which offer long sunny days, brilliant cerulean waters, and hidden gems waiting to be discovered. Visits to the Peloponnese peninsula’s UNESCO World Heritage Sites of Mycenae and Epidaurus, as well as to the beautiful historic town of Nafplio, round out the program.

AIA lecturer and host Candace Weddle Livingston, part of a team of onboard lecturers, will enrich the program through illustrated lectures and informal discussions on the archaeology and mythology that we encounter along our route. Savor fine dining in the luxurious salon or on the open teak deck, enjoy engaging presentations and casual conversation in the piano lounge and, depending on your interests, discover the library, fitness studio, spa services, or swim platform. You will also feel comfortable retiring to your cabin or suite—a spacious, stylish, and delightful retreat. And throughout your voyage, indulge in the personalized, exemplary care lavished by 60 crew members.
With only 47 cabins available, and with this cruise being co-sponsored by other organizations, I encourage you to reserve your preferred cabin today by contacting AIA Tours at aia@studytours.org or (800) 748-6262.

For detailed pricing and more information download the brochure.

Optional Pre-Tour Extension in Athens
July 9–12
Spend two full days exploring the highlights of Athens including the Acropolis to see the iconic Parthenon; the Agora, a political and social center of ancient Athens; two of Athens’ best museums,
the Acropolis Museum and the National Archaeological Museum; and the historical Plaka district. Further details and pricing will be sent to confirmed participants.

Monday-Tuesday, July 11 -12: Home / Athens, Greece
Depart the U.S. on your flight to Athens, Greece. Arrive at Athens airport on July 12th and transfer to your hotel located in the city’s historic Syntagma Square. In the early evening meet your fellow travelers at a festive welcome reception. HOTEL GRANDE BRETAGNE (R)

Wednesday, July 13: Athens
Visit the Goulandris Museum of Cycladic Art in Athens, featuring art and artifacts from one of the three earliest Aegean cultures, dating from c. 3300 to 100 B.C., in preparation for our calls at the Cycladic islands of Delos and Naxos. Following a sumptuous lunch of traditional Greek cuisine, drive to the port of Piraeus and board the elegant Sea Cloud II. Enjoy a Captain’s welcome reception and dinner while cruising to Delos. SEA CLOUD II (B,L,R,D)

Thursday, July 14: Delos
Explore the UNESCO World Heritage Site of Delos, thought to be the mythological birthplace of Apollo and Artemis, two powerful Greek gods. A sacred place for millennia, this uninhabited island is now an archaeological park whose riches are uncovered during a walking tour through the excavated ruins, including the famed Terrace of the Lions and the House of Dionysus. Return to the Sea Cloud II for a relaxed afternoon of water sports, swimming, and the thrilling experience of cruising under sail. SEA CLOUD II (B,L,D)

Friday, July 15: Naxos
Call on the island of Naxos, Queen of the Cyclades, boasting lush green valleys, stunning seascapes, ancient treasures, and authentic villages perched high on mountain tops. Choose to head into the mountains or stay close to the coast during optional morning excursions. Amble through Apeiranthos, the crown jewel of Naxos, a stunning mountainous village with stone-built houses, beautiful squares and narrow alleys paved with marble; and marvel at the Kouros of Apollonas, the giant and ancient statue of Dionysus lying unfinished in one of Greece’s
oldest quarries. Or take in the views from the huge Venetian castle in Chora, the island’s capital, that once protected the city from attackers before enjoying a guided walking tour of Naxos’s charming old town with lovely bays and beaches enticing a swim or snorkel in the crystal clear water. Return to the ship for lunch, followed by an afternoon of sailing between islands. SEA CLOUD II (B,L,D)

Saturday, July 16: Milos
Experience the island of Milos, where Venus de Milo was unearthed in the 19th century, and where volcanic activity has created a unique and stunning landscape of distinctive rock formations and pristine beaches. Visit beautiful fishing villages and walk the streets of Plaka, the picturesque old capital with its typical dazzling white houses, overlooked by a mighty castle which offers a superb view over Adamos Bay and the surrounding islands. Spend the afternoon at sea cruising toward the Peloponnese Peninsula. SEA CLOUD II (B,L,D)

Sunday, July 17: Kythera / Monemvasia
Arrive on Kythera–just off the southern tip of the Peloponnese–at Kapsali Harbor to explore the town and enjoy a special event on  this seldom-visited island, known in mythology as the island of Aphrodite. Continue to Monemvasia, an important Byzantine site and medieval fortress town that clings to a massive rock rising dramatically from the sea. Enter through the fortified gate and enjoy time to explore  charming alleyways, shops, and tavernas, stealing views across the Aegean Sea. SEA CLOUD II (B,L,D)

Monday, July 18: Nafplio (Mycenae)
Take in the impressive ruins of Mycenae, once a major center of Bronze Age civilization known for its imposing structures and gold treasures, including the reputed mask of Agamemnon, regarded as mere legend until its ruins were discovered in the 1870s by Heinrich Schliemann. At the UNESCO World Heritage Site of Epidaurus, see the Asclepeion (healing temple) and experience the marvelous acoustics in the enormous 4th century B.C. theater. Remain in port to soak up the lovely and lively atmosphere of the charming seaport town of Nafplio in the evening. SEA CLOUD II (B,L,D)

Tuesday, July 19: Hydra
Stop at the Saronic island of Hydra, a quiet island with no cars, to see where Athenians go for respite from the city. Walk the cobbled streets of Hydra Town restored and preserved exactly as it was in the 1800s with its Venetian style architecture. Return to the ship and enjoy a final afternoon of sailing as the ship returns to Athens. Gather this evening for the Captain’s farewell reception and dinner while enjoying sensational views of Cape Sounion, including the ruins of the Temple of Poseidon. SEA CLOUD II (B,L,R,D)

Wednesday, July 20: Athens / Home
Disembark in Piraeus and transfer to Athens airport for flights home. (B)

Optional Pre-Tour Extension in Athens
July 9–12
Spend two full days exploring the highlights of Athens including the Acropolis to see the iconic Parthenon; the Agora, a political and social center of ancient Athens; two of Athens’ best museums,
the Acropolis Museum and the National Archaeological Museum; and the historical Plaka district. Further details and pricing will be sent to confirmed participants.