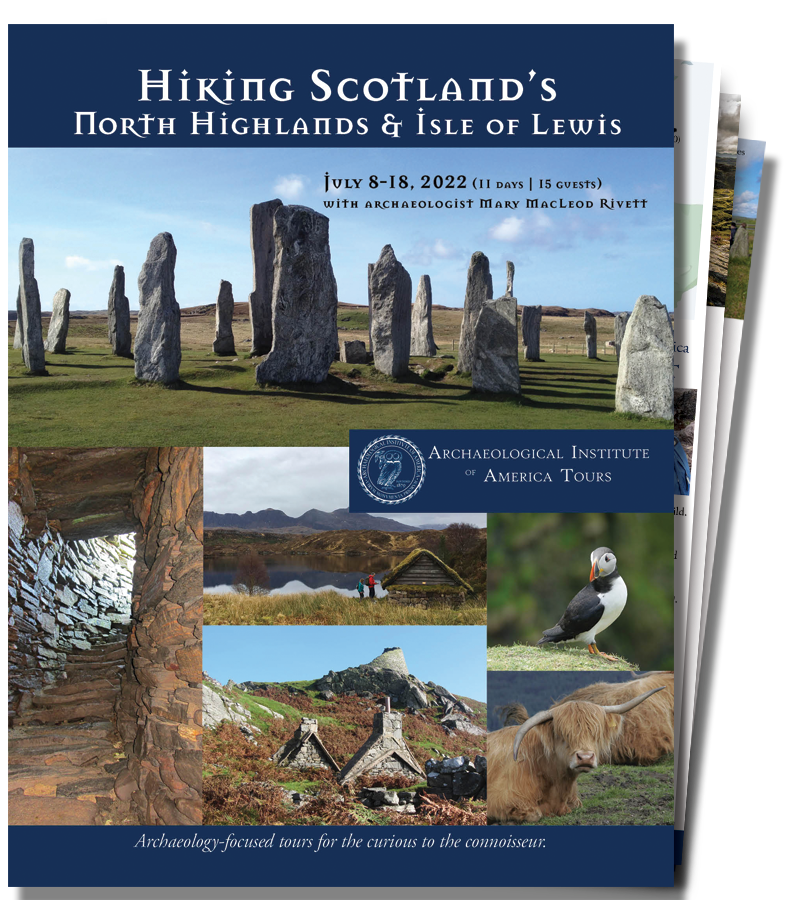 For more information about this tour to make a reservation please contact us at aia@studytours.org or call 800-748-6262 or reserve your space online.

Join archaeologist Mary MacLeod Rivett and a small group of like-minded travelers on this 11-day tour of Scotland’s remote north Highlands and the Isle of Lewis in the Outer Hebrides. Mostly we will explore off the well-beaten Highland tourist trail, and along the way we will be treated to an abundance of archaeological and historical sites, striking scenery – including high cliffs, sea lochs, sandy and rocky bays, mountains, and glens – and, of course, excellent hiking.
Scotland’s long and varied history stretches back many thousands of years, and archaeological remains ranging from Neolithic cairns and stone circles to Iron Age brochs (ancient dry stone buildings unique to Scotland), medieval castles, and deserted clearance villages cover these landscapes. Seven of our touring days involve hikes of 4.5 to 6 miles per day, and we will rest and reflect in comfortable hotels that extend Highland warmth and hospitality.

“The sites were great and hiking to them in the spectacular land was great. Mary Rivett was so knowledgeable and her overall humor and warm hospitality added a huge dimension to the experience which was complimented by both guides and especially the tour manager’s excellent daily organizing and flexibility.”
-Barbara, California

This unique tour is more active than our usual land tours and features almost-daily hikes that are easy to moderate in difficulty. To fully enjoy and visit all the sites on this itinerary one should be in good walking condition and, obviously, enjoy walking!
Two minibuses, each with a local driver/guide, will accompany our group, which is limited to only fifteen guests. Our guides will explain in advance the difficulty of each day’s walk(s) and, if you prefer, you can opt out of any walking excursion and be driven to the next stop; but, bear in mind that some sites can only be visited if you walk to them. The distance of and height climbed during each walk is estimated within the following itinerary and indicated on the map.

Tuesday, July 18: Inverness, Scotland | Brora | Welcome dinner
Upon arrival at Inverness Airport (INV), you will be met and transferred as a group, driving north along the east coast of Sutherland, to our hotel in Brora. Gather this evening for a welcome dinner. Overnight at the 4-star Royal Marine Hotel for three nights. (D)

Wednesday, July 19: Dunbeath | Brora
4.5 miles and 425 feet of ascent
Travel further north to Dunbeath, in southeast Caithness, and hike into Dunbeath Strath along Dunbeath Water. The path runs along a gorge through fine woodland of lichen-encrusted downy birches, rowans, and hazels, before reaching open ground. We will see many interesting sites along the way, including an old mill built in 1850/1860, the site of a monastery, an Iron Age broch, a deserted settlement from around 1800, and various chambered cairns. End the day with a visit to the Dunbeath Heritage Museum. (B,L,D)

Thursday, July 20: Caithness | Brora
Up to 5 miles, 715 feet of ascent
Drive even farther north into Caithness to explore the wealth of archaeological sites in this part of the north Highlands. Most of Caithness is now uninhabited, but the remains show that this area was highly populated in the past. There are a large number of Neolithic and Iron Age sites, including the Grey Cairns of Camster – two Neolithic tombs (a long cairn and a round cairn) built more than 5,000 years ago – and the Hill o’Many Stanes, consisting of about 200 small stones arranged in rows running down a low hill. They were placed about 4,000 years ago, possibly for gatherings and religious ceremonies. Large arrangements of stone rows like this are rare. (B,L,D)

Friday, July 21: Lairg | Northwest Highlands UNESCO Global Geopark | Ardvreck Castle | Lochinver
Total of 4.5 miles and 885 feet of ascent
Depart Brora this morning and travel across the north Highlands to the west coast. Stop for a walk in Lairg, along the shores of Loch Shin, to a hilltop viewpoint with archaeological sites en route. This was prime farming land 3,500 years ago. Continue to the west, entering the Northwest Highlands UNESCO Global Geopark. Learn about the unique geology of this part of Scotland on a hike at Knockan Crag. Our last stop on the way to Lochinver is at the ruins of Ardvreck Castle, on the shores of Loch Assynt, dating from the 16th century. Overnight at the 5-star Inver Lodge Hotel for three nights. (B,L,D)

Saturday,  July 22: Handa Island | Little Assynt | Lochinver
Total of 6 miles and 890 feet of ascent
Handa Island is a short boat ride from the mainland. More than 100,000 seabirds breed on the island, including puffins, but its last 64 human residents were forced to leave the island for Nova Scotia following the potato famine in 1847. Our walk takes us past the remains of the village and old burial ground. This afternoon we take a very pleasant hike in Little Assynt, with great views of Assynt’s distinctive mountains, lots of wild flowers, and many remains of old settlements including farmsteads, shieling huts, a corn mill, and field systems. (B,L,D)

Sunday, July 23: Clachtoll Broch | River Inver | Lochinver
Total of 5.5 miles and 645 feet of ascent
Today starts on Clachtoll Beach with a walk along the coast to Clachtoll Broch. This broch was excavated in 2017 and around 250 artifacts were discovered, including a fascinating range of decorated pottery, coarse stone tools, worked bone, metal tools, and ornaments. The end of occupation at Clachtoll seems to have been marked by a major fire. Radiocarbon dating suggests this was in the first century B.C. or early first century A.D. Back in Lochinver we hike up the beautifully wooded River Inver and on an old path across the moors, passing a cleared blackhouse village and enjoying amazing mountain views along the way. (B,L,D)

Monday, July 24: Stornoway, Isle of Lewis: Museum nan Eilean, Harris Tweed weaver | Borve
This morning we travel south to Ullapool to take the ferry across the Minch to Stornoway, on the Isle of Lewis, in the Outer Hebrides. On arrival visit the Museum nan Eilean, in a modern wing of the restored, mid-19th-century Lews Castle. The museum offers an interactive explanation of the history and culture of the Outer Hebrides alongside an exhibition of unique objects dating from prehistory to the present day, including six of the famous Lewis Chessmen. We then visit a Harris Tweed weaver, for whom weaving is a good means of earning a living at home, and check-in to our charming hotel in Borve. Overnight at the 4-star Borve Country House Hotel for three nights. (B,L,D)

Tuesday, July 25: Callanish Standing Stones | Dun Carloway | Arnol | Loch Mor Bharabhais | Borve
Total of 4.5 miles, limited ascent
Begin the day with a visit to the magnificent, 5,000-year-old Standing Stones of Callanish (Calanais in Gaelic). The main stone complex contains around 50 stones, with a ring of large stones about 12 meters in diameter surrounding a huge monolith at its center and the remains of a chambered cairn. There are lines of stones running north, south, east, and west from the stone circle, and two other stone circles are nearby. Continue on to Dun Carloway, one of the best-preserved Iron Age brochs in western Scotland. The broch was probably built in the 1st century B.C., and radiocarbon dating shows that it was last occupied around A.D. 1300. This afternoon we visit the Arnol blackhouse. Once the home of a Hebridean crofting family and their animals, the thatched house is preserved almost as the family left it when they moved out in 1965. The double drystone walls, low profile, and insulating thatch made blackhouses well suited to the Hebridean climate. We end the day with a walk from Arnol across the moor to the stunning coastal Loch Mor Bharabhais. (B,L,D)

Wednesday, July 26: Great Bernera: Bostadh, Breaclete, Traigh Uige | Farewell dinner
Total of 6 miles and 870 feet of ascent
Take a morning walk on the Isle of Great Bernera, connected to Lewis by a bridge, where in 1993 a severe storm cut away the dunes at Bostadh to reveal a series of stone structures projecting through the sand. The University of Edinburgh excavated the site in 1996 and found evidence of a Norse settlement and, underneath the Norse levels, a series of five, remarkably well-preserved, Pictish ‘jelly baby’ or ‘figure eight’ houses dating back to the 6th-9th centuries A.D. What is visible today is a reconstruction, as the excavated houses were reburied for preservation. Hike across the moor to the museum at Breaclete which displays finds from the excavation. Our final walk of the tour will be at Traigh Uige (Uig Sands), one of the most beautiful beaches in the Outer Hebrides. The famous Lewis Chessmen – a collection of 93 pieces dating from the 12th century – were found here in the dunes in 1831. Walk across the sands to the historic Baile na Cille burial ground. Gather this evening for a farewell dinner at our hotel. (B,L,D)

Thursday, July 27: Stornoway | Fly to Glasgow
In the morning we travel to Stornoway for a one-hour group flight to Glasgow International Airport where, upon arrival, we transfer to our hotel. The balance of the day is at leisure to relax at the hotel or take a taxi and independently explore vibrant Glasgow. Lunch and dinner are on your own today. Overnight at the 4-star Holiday Inn Glasgow Airport hotel. (B)

Friday, July 28: Fly home
Check out of the hotel this morning and walk the short distance to the main terminal of the Glasgow International airport (GLA) for independent flights homeward. (B)