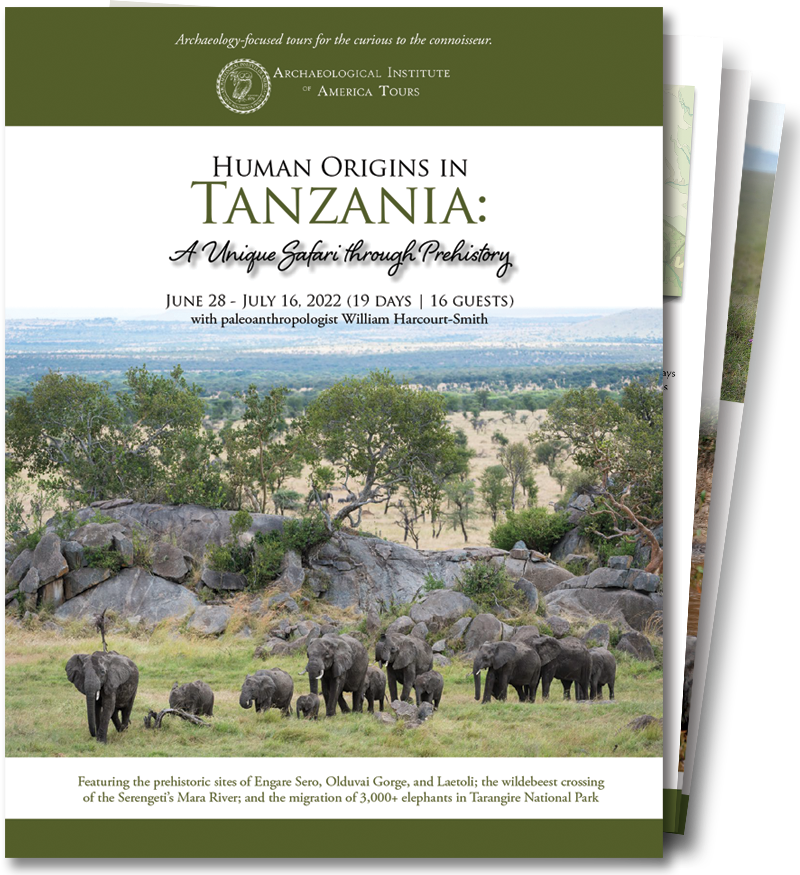 Join paleontologist William Harcourt-Smith on this safari through prehistory, experiencing the wildlife and landscapes of Tanzania while learning about the hominins who evolved and survived on those very plains eons ago. In July (and August) Tanzania is at its coolest, sunniest, and driest, and the dry season attracts abundant animals to the region’s life sustaining rivers. We have timed our visit to witness the renowned wildebeest crossing of the Mara River with lurking Nile crocodiles—an extraordinary predator/prey spectacle—and our time in Tarangire National Park will include the migration of some 3,000 elephants.
Along the way we will learn about human origins at several physical sites, but also through a series of lectures and discussions with Dr. Harcourt-Smith. Spend two nights at Lake Natron, well known for being near Ol Doinyo Lengai – the only active volcano in Tanzania – and a number of archaeological sites, including Dr. Harcourt-Smith’s most recent project at Engare Sero, where was found the largest collection of footprints currently known from Africa’s human fossil record. We will also visit Olduvai Gorge, the site of Louis and Mary Leakey’s famous, mid-20th-century paleoanthropological discoveries that indicated that hominins had evolved in Africa; as well as Laetoli, site of the renowned, nearly 90-foot-long “Laetoli Footprints” made by early humans as they walked in wet volcanic ash.
Throughout our adventure you will enjoy generous comfort and exceptional service at several charming lodges and memorable safari camps. Camping (in great comfort) near the herds and away from the tourist lodges will leave you with unforgettable memories. All of our game drives will be led by expert driver-guides, and we will enjoy extra room for gear and to move about with no more than four guests per six-seater, stretch Land Rover and Land Cruiser, specially adapted for photography and unrestricted game viewing. Journeying through the impressive wildlife, beauty, and diversity of this African terrain highlights the privilege of exploring and learning from the world around us.

Single room supplement will be charged when requested or required.
With fewer than 8 participants, a small group surcharge may be applied.

A jackal, flamingos, a small bird and an hippopotamus in the Ngorongoro crater lake.

Zebra in Ngorongoro - AIA Tours, travel with the Archaeological Institute of America

Footprints at Engare Sero - AIA Tours, travel with the Archaeological Institute of America

Wednesday, June 29: Arrive Arusha, Tanzania | Transfer to hotel
Arrive at Kilimanjaro International Airport (JRO) near Arusha, Tanzania, likely in the early evening. Upon arrival, you will be met by a local representative, helped through customs, and transferred to our inn, approximately 30 minutes from the airport. Overnight at the 5-star Country Inn & Resort for two nights. (D)

Thursday, June 30: At leisure
Enjoy this day at leisure, to rest up and explore our inn’s 30 acres in a private community. The main house has 10 rooms and stunning gardens with views of Mount Meru to the west and Mount Kilimanjaro to the east. Relax on the balcony of your room and/or enjoy amenities such as the pool, a tour of the coffee plantation and vegetable gardens, and bird watching. Before dinner we will gather for an introductory lecture by Dr. Harcourt-Smith. (B,L,D)

Friday, July 1 to Sunday, July 3: Tarangire National Park
Depart Arusha after an early breakfast and drive approximately 2.5 hours to Tarangire National Park. This is a peak time of the year in the Park, when it hosts a large elephant migration. The park has 3,000 resident elephants that are joined by another 3,000 migratory elephants that come into the park for water in the Tarangire River and surrounding wetlands. Other herd animals such as wildebeest, zebra, gazelle, and antelope of all kinds also migrate into the park between July and the end of October. Tarangire is also famous for its beautiful baobab trees, variety of habitats, and large numbers of baboon and impala. The park’s lion often climb trees, just as they do in the Serengeti.

On July 1st  we arrive at the lodge in time for a hot lunch and an afternoon game drive. On July 2nd and 3rd we will continue our explorations of the park on morning and afternoon game drives. In addition, we will arrange time with one of the elephant field researchers for a field talk (schedule permitting). Overnight at the 3-star Tarangire Sopa Lodge for three nights. (B,L,D each day)

Monday, July 4 & Tuesday, July 5: Lake Natron & Engare Sero
After an early breakfast at our lodge we check out and game drive out of Tarangire to Lake Natron, enjoying a picnic lunch along the way. We drive to the colorful village of Mto wa Mbu before turning off the main road onto the unpaved road to Lake Natron. We will be driving through the Gregory Rift, an offshoot of Africa’s Great Rift Valley, and while there will not be much wildlife we will enjoy the splendor of the Valley and pass small villages along the way. Our destination, Lake Natron, is famous for its mineral-rich soda lake which attracts 75% of the lesser flamingo population for breeding season between October and February. The very high alkalinity of the lake discourages predators from living in the area and allows abundant growth of the spirulina algae that is the main food for lesser flamingo. Lake Natron is also well known for being near Ol Doinyo Lengai, the only active volcano in Tanzania.

July 4th will be a long day of driving to our camp, and we expect to arrive in the late afternoon. In the morning of July 5th we visit Engare Sero, site of the more than 400 fossil hominin footprints, dated to the Late Pleistocene (6,000 to 19,000 years ago) and preserved in volcanic ash, that were recently excavated and studied by Dr. Harcourt-Smith and his colleagues. For the afternoon you may choose from a selection of activities offered by our camp, such as swimming, birding, and hiking. Overnight at the 4-star Lake Natron Camp for two nights. (B,L,D each day)

Wednesday, July 6: Northeast Serengeti National Park
Depart our camp this morning and drive north in the Loliondo Game Management Area to the Klein’s Ranger Gate to enter the northeast Serengeti, arriving at Migration Camp in the mid-afternoon (depending on unpaved road conditions). Enjoy an optional guided walk on the property or a refreshing dip in the pool before we gather for a private sundowner before dinner. Migration Camp is built close to a bend in the Grumeti River, with lovely sunsets and the sound of hippos enjoying their time in the river. Overnight at the 5-star Migration Camp. (B,L,D)

Thursday, July 7 to Saturday, July 9: Game drive to NW Serengeti and Mara River
Depart the lodge at 6am on July 7th to enjoy a leisurely game drive through the areas of Lobo Valley, Bologonja, Nyamalumbwa Hills, and to the famous Mara River during a peak time for river crossings. July 8th and 9th will be full days of exploring the northwestern Serengeti in anticipation of witnessing portions of the wildebeest herd cross the river. The herd has actually experienced a significant change in their movements over the past eight to ten years, primarily due to the loss of habitat in the northernmost area of the Serengeti ecosystem, which is also Kenya’s Maasai Mara. Tanzania has a committed policy to conduct controlled burning of grassland to increase the nutritious quality of the grass, but Kenya does not conduct the same policy, so grasses are higher quality and more abundant in the northwestern Serengeti and approximately 70% of the wildebeest herd now remains inside the Serengeti during the dry season. Overnight at the 4-star Karibu Serengeti River Camp for three nights. (B,L,D each day)

Sunday, July 10 & Monday, July 11: Central Serengeti
On the morning of July 10th we depart our camp and game drive to the central Serengeti to spend two days in this cat-rich area of the Park. Game drives on both days focus on cats hunting and the resident wildlife of the vast central Serengeti. Although the large herds are not present at this time of year, the resident wildlife is excellent. Since cats do not migrate with the herds, they are left to defend their territories and search for dwindling prey. Lions and leopards now have to hunt both day and night to secure enough food for survival. Overnight at the 5-star Karibu Serengeti Sametu Camp for two nights. (B,L,D each day)

Tuesday, July 12 to Thursday, July 14: Olduvai Gorge | Laetoli | Ngorongoro Crater
Depart the central Serengeti on the morning of the 12th and drive to the Ngorongoro Crater, stopping along the way for an extended visit to Olduvai Gorge, all part of the UNESCO World Heritage (mixed natural/cultural) Site of the Ngorongoro Conservation Area. Olduvai Gorge was the site of Louis and Mary Leakey’s famous hominin fossil discoveries that put East Africa on the paleoanthropological map. The first discovery was in 1959, when Mary Leakey found a hominin skull fragment (dated to about 1.75 million years ago) that was eventually classified as Paranthropus boisei. Homo habilis and Homo erectus specimens were also found in the Gorge, as were Oldowan stone tools and animal bones and teeth that had been manipulated by hominins. Our visit will also include the newly-renovated site museum, dedicated to the Leakeys’ discoveries and the archaeology and geology of this area. Continue to the Ngorongoro Crater and drive down to the floor of the caldera for a game drive as we travel to our camp on the eastern rim.

On July 13th we will leave the camp very early and drive down to the Crater floor to take a “short-cut” on our drive to Laetoli, which is about 3 hours from the western rim. Laetoli is the site of the famous, nearly 90-foot-long “Laetoli Footprints,” a 3.6-million-year old trail made by early humans, most likely Australopithecus afarensis, as they walked in wet volcanic ash. Dr. Harcourt-Smith will be at his best discussing this important area for human origins. (Please note that the footprints themselves are not visible.) Drive around the rim road to return to our camp for dinner. On July 14th we will enjoy a full day down in the Crater for wildlife viewing, including a special bush lunch. In the Crater are thousands of wildebeest; still many black rhino, cheetah, and gazelle; abundant birdlife; and, arguably, the highest density of hyena anywhere in Africa. Enjoy a farewell dinner our last evening at the camp. Overnight at the 5-star Ngorongoro Lion’s Paw Camp for three nights. (B,L,D each day)

Friday, July 15 & Saturday, July 16: Arusha | Transfer to airport | Fly home
After breakfast we drive back to Arusha, stopping along the way at the Cultural Heritage Center for lunch and some shopping. Continue to The Country Inn & Resort where you have a day room with time to relax, shower, and pack. Transfer to Kilimanjaro International Airport (JRO) in time for homeward flights that depart on the 15th, and arrive in the U.S. the next day. (B,L,D on July 15th)