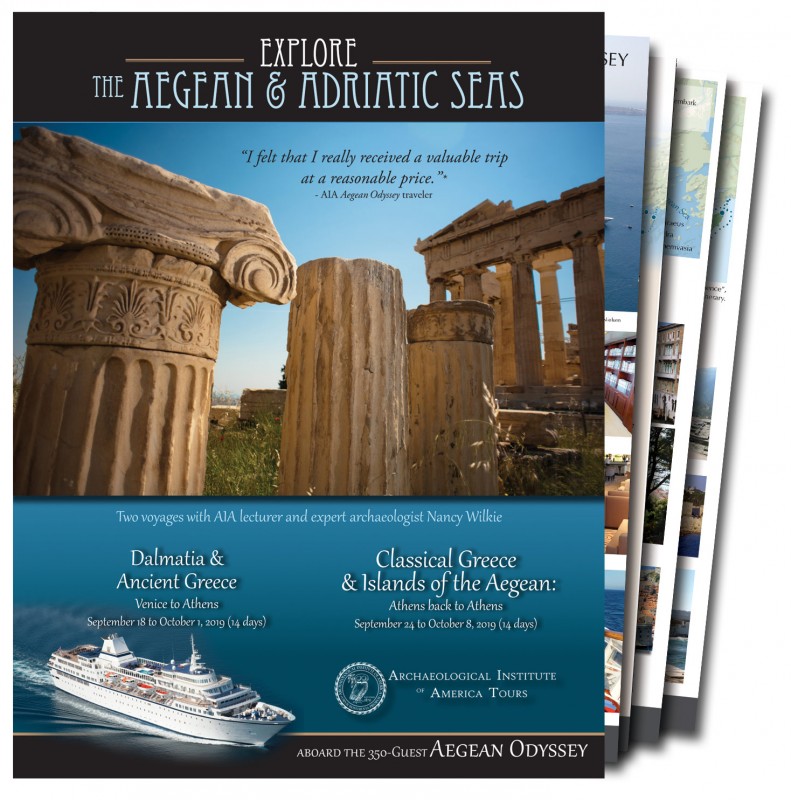 Join popular AIA Tours lecturer Nancy Wilkie for this 10-night cruise aboard the 216-cabin Aegean Odyssey from Venice, Italy, to Athens, Greece; plus spend two nights at a 4-star hotel in Athens. In Urbino, discover the great masterpieces of the Renaissance; then visit Roman Emperor Diocletian’s palace in Split and the beautiful, historic town of Dubrovnik, Croatia. Cruise through the natural wonder of Kotor Bay to the classical ruins of Butrint, in Albania. See ancient Olympia, birthplace of the Olympics; tour Monemvasia, a tiny municipality joined to the Greek mainland by a single causeway; stroll around the car-less idyll of Hydra, one of Greece’s most charming and picturesque islands; and much more.

The Aegean Odyssey is small enough to call at ports that are inaccessible to the ‘mega-ships,’ but large enough to offer a selection of amenities, including two dining venues, a spacious theater for lectures and musical performances, several comfortable lounges and bars, a relaxing spa center, and a well-stocked library. Her cabins are spacious, modern, and intelligently designed, and you can choose from a wide range of cabin types, from inside cabins, to cabins with portholes or picture windows, to luxurious suites with balconies.

Travelers have the option to stay aboard ship and continue on the Classical Greece & Islands of the Aegean program for a 20-day Grand Voyage, which includes free airfare! Download the brochure for more information.

This is a value-priced premium learning adventure, co-sponsored by other organizations. A convenient Air/Land/Cruise package is available from a number of U.S. cities. Take advantage of early booking discounts, called “Saver Fares”! These Saver Fares are subject to change and capacity controlled, and may be withdrawn at any time (in which case “Full Fares” will apply), so we encourage you to reserve your preferred cabin now!

*Saver Fares, which are early booking discounts, are subject to change, capacity controlled, and may be withdrawn at any time subject to market demand. Once withdrawn, Full Fares will apply. We encourage you to reserve your preferred cabin now!

For complete pricing and cabin information, download the brochure

Continue your voyage on the Aegean Odyssey for the Grand Voyage, download the brochure for details.

Friday, September 20: AM Venice walking tour or Lagoon excursion | PM at leisure
AM guided walking tour of the city, a UNESCO World Heritage site. First, travel by boat down the beautiful Giudecca Canal to St. Mark’s Square (Piazza San Marco). Walk to St. Mark’s Basilica, and view (from the outside) the Doge’s Palace, a 14th-century Gothic masterpiece. Alternatively, you may choose a morning boat excursion to two islands of the Venetian Lagoon: Murano, of glass-making fame; and Burano, with its gaily-painted fishermen’s houses. After lunch aboard ship, the PM is at leisure in Venice. Dinner is aboard ship this evening. (B,L,D)

Saturday, September 21: Urbino: AM walking tour | PM at leisure
Urbino is a small town with a big history, and is today a UNESCO World Heritage site. AM tour of the 15th/16th-century artist Raphael’s childhood home and then visit the Palazzo Ducale, Italy’s most beautiful Renaissance palace. Continue on to the neoclassical Duomo (Cathedral), which was rebuilt in the early 19th century and houses several important artworks. The basilica’s Museo Diocesano Albani has a collection of glass, ceramics, and religious items. Lunch and PM at leisure in Urbino. Return to the ship for dinner. (B,D)

Sunday, September 22: AM Split, CROATIA: Diocletian’s Palace | PM at leisure or optional Salona & Trogir excursion
AM tour of Roman Emperor Diocletian’s Palace in Split. Today a UNESCO World Heritage site, the palace complex is a vibrant warren of museums, shops, and restaurants alongside medieval fortifications, pre-Romanesque churches, and Gothic chapels. PM at leisure in Split OR you may take an optional excursion (at an additional cost) to two gems of the Dalmatian coast: ancient Salona, where archaeologists have excavated temples, a necropolis, an amphitheater, and baths dating from the 1st century A.D.; and the delightful nearby island of Trogir, a UNESCO World Heritage site lined with architectural jewels. Return to the ship for dinner. (B,L,D)

Monday, September 23: AM Korcula walking tour | Cruise past Hvar & Brac | Dubrovnik
AM walk from our ship to Old Town to visit the impressive Cathedral of St. Mark, 14th-century Bishop’s Palace, and 16th-century Gabrielli Palace whose City Museum displays Greek and Roman artifacts. Korcula lays claim to being the birthplace of Marco Polo in 1254, and our walk takes us by his family home. PM cruising past the scenic islands of Hvar and Brac en route to Dubrovnik. Evening at leisure in Dubrovnik. (B,L,D)

Tuesday, September 24: AM Dubrovnik walking tour | PM cruising Kotor Bay
AM walking tour of the Old Town of Dubrovnik, the best-preserved medieval walled city in the Mediterranean and a UNESCO World Heritage site. Visit the Dominican and Franciscan monasteries and the Cathedral of Our Lady, and pass such landmarks as the Sponza Palace, Baroque Church of St. Blaise, and Onofriou’s Fountain. Return to the ship in time for lunch. PM cruising scenic Kotor Bay. (B,L,D)

Wednesday, September 25: Sarande, ALBANIA | Butrint
Take a 45-minute drive from Sarande to the UNESCO World Heritage site of Butrint (ancient Buthrotum), not only one of Albania’s most remarkable archaeological sites but also one of its most beautiful national parks. The approximately 50-square-mile site was occupied successively by a 6th-century Greek colony, a Roman city, and a bishopric. The city prospered under Byzantine administration, was occupied in the 14th century by the Venetians, then by the French, and then by the Ottomans, and was abandoned in the late Middle Ages. Walk along the winding paths to discover its monuments, get a great view from the acropolis, and visit the site museum. (B,L,D)

Thursday, September 26: AM Olympia tour | PM cruising | Pylos
AM drive from Katakolon to ancient Olympia, a UNESCO World Heritage site. See the ruins of the enormous Temple of Zeus, the Temple of Hera, the Prytaneion, and the famous stadium, and visit the site museum. PM cruising to Pylos, where the evening is at leisure. (B,L,D)

Friday, September 27: AM Ancient Messene & Mavromati OR Neo Kastro & Methoni | PM at leisure
AM choice of two excursions (included), either to ancient Messene or the castles of Neo Kastro and Methoni. Those who choose well-preserved Messene, which dates back to 146 B.C., will see its theater, 3rd-century temple, sanctuary, and Byzantine monastery. Then drive a short distance to Mavromati village for a coffee break and panoramic view of Messene. Those who choose instead to visit nearby castles will drive to the 16th-century Neo Kastro (“New Castle”), which houses an archaeological museum and is one of the best-preserved castles in Greece; and to the vast, 13th-century Venetian castle of Methoni. PM at leisure. Dinner is aboard ship this evening. (B,L,D)

Saturday, September 28: AM Monemvasia walking tour | PM cruising | Hydra
AM walking tour of the lower town of medieval Monemvasia, along narrow, cobbled streets, and visit the 13th-century Church of Christos Elkomenos (Christ Chained to the Cross). Those who are up to the challenge can climb to see another 13th-century treasure, the ethereal Agia Sofia, with views over the sea and lower town. PM cruising to the charming island of Hydra, where the evening is at leisure. (B,L,D)

Sunday, September 29: Disembarkation* | AM Athens: Acropolis & Acropolis Museum | PM at leisure
Disembark in Piraeus and drive into Athens for an AM visit to the Acropolis (a UNESCO World Heritage site) and nearby Acropolis Museum. Ascend the Acropolis’s rocky hill dominated by the majestic Parthenon, surrounded by other architectural masterpieces such as the Erechtheion, with its beautiful Karyatid Porch; and the Temple of Athena Nike (Winged Victory). A short walk down the street brings you to the excellent Acropolis Museum for a guided tour. Lunch and the balance of the day are at leisure in Athens. Overnight at the 4-star King George Hotel for two nights. (B)
*Nancy Wilkie and travelers booked on the Grand Voyage program do not disembark today – they have an AM excursion exploring Byzantine Athens and, this afternoon, new fellow travelers join them aboard Aegean Odyssey to begin the Classical Greece & Islands of the Aegean program.