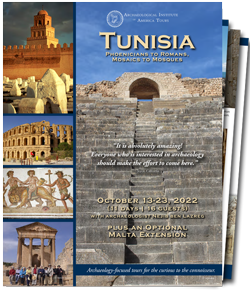 This fascinating itinerary features all seven of Tunisia’s cultural UNESCO World Heritage sites, including Travel and learn with study leader/guide and archaeologist Nejib ben Lazreg and up to 16 guests.
Visit ALL seven of Tunisia’s cultural World Heritage Sites. Explore fabled Carthage, including the Antonine Baths and the cisterns. Spend three full days in and around Tunis, including a visit to the Bardo Museum, featuring exquisite exhibits of Roman and Byzantine mosaics. See the beautiful Cape Bon coast and the Punic site of Kerkouane. Marvel at Bulla Regia, a well-preserved site featuring underground Roman villas, a museum, a Temple of Apollo, and a 2nd-century theater. Tour Dougga, established prior to the Romans, with its 3,500 seat theater; Temples of Saturn, Augustan Piety, and Mercury; and Capitol. Discover Kairouan, the fourth holiest city in the Muslim world, founded in A.D. 670, with its carpet, leather, brass, and spice vendors; and its Great Mosque with a three-tiered minaret. Visit El Djem, one of Tunisia’s most extraordinary sites, with a marvelous, 30,000-seat, ancient amphitheater and a museum that houses lovely mosaics. Wander through Thuburbo Majus, a sprawling site occupied in turn by Berbers, Phoenicians, and Romans. The imperial remains include the Forum, Temple of Mercury, and sunken winter baths. Join our optional three-night extension to Malta and visit the megalithic temples at Tarxien, Hagar Qim, Mnajdra, and Ggantija; and the scenic medieval cities of Valletta and Mdina.