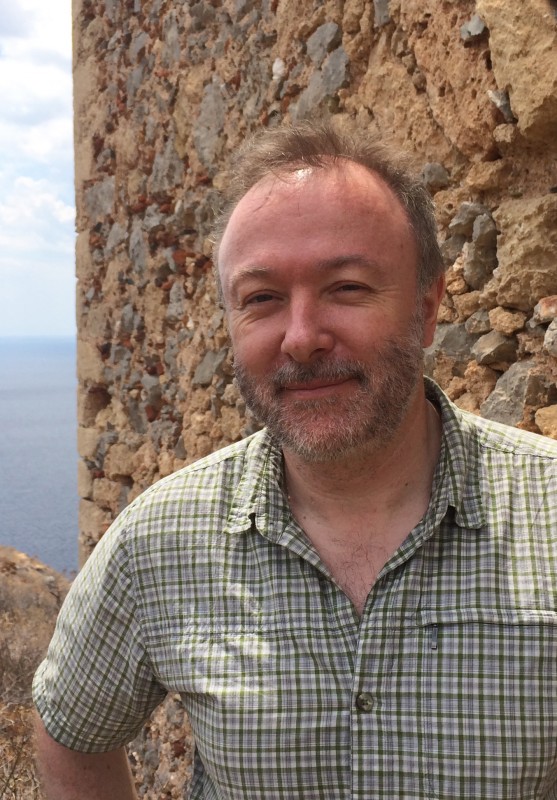 Professor Marcus Milwright is with the Department of Art History and Visual Studies at the University of Victoria; he holds his degrees from Edinburgh University and the University of Oxford (D.Phil.).  His areas of specialization include the art and archaeology of the Islamic world, cross-cultural interaction in the Mediterranean in the medieval and early modern periods, crafts and labor in the Islamic Middle East, and the history of medicine.  His current publications include Islamic Arts and Crafts: An Anthology (2017), The Dome of the Rock and its Umayyad Mosaic Inscriptions (2016), and An Introduction to Islamic Archaeology (2010).  Professor Milwright was the AIA Ettinghausen Lecturer for 2018/2019.

The Shock of the New? Writing and the Propagation of Religious Ideology in early Islam

Before the Railway: Trade and the Syrian Hajj in the Mamluk and Ottoman Periods

Prior to the advent of mass air travel Muslims performing the pilgrimage (hajj) to the Holy Cities of Mecca and Medina were faced with long, expensive, and often physically arduous journeys by land and sea. In most cases, these routes predated the birth of Islam and had long been employed by merchant caravans, armies, and travellers. The annual movement of large numbers of Muslims along both roads and sea routes naturally brought with it significant economic considerations. Most important was the supply of foodstuffs to pilgrims although money might also be given to nomadic groups to protect caravans from banditry. Much of the financing was provided by the Muslim polities through which the main hajj routes ran, but food and other supplies were also purchased by individual pilgrims from merchants, artisans and farmers along the way. Temporary markets were sometimes established in rural areas in order to benefit from the passage of the hajj, while pilgrims might sell valuable goods en route in order to pay for the onward journey. Lastly, there is evidence for the creation of crafts devoted to the production of tokens of pilgrimage. These varied forms of economic activity have left numerous traces in the archaeological and historical records. This talk discusses that evidence with a particular focus on the route leading from Damascus to Mecca in the period from the late thirteenth to the end of the nineteenth century (the Mamluk and Ottoman sultanates). The annual passage of the hajj caravan radically transformed the extent and nature of trade in the regions bordering the road in ways that can still be seen today.

Andrew Petersen, Medieval and Ottoman Hajj Route in Jordan: An Archaeological and Historical Study, Levant Supplementary Series 12 (Oxford and Oakville: Oxbow Books and Council for British Research in the Levant, 2012).

The prominent role played by writing in the visual cultures of the Islamic world is, of course, well known. Ornamental scripts adorn buildings and objects of all periods from the seventh century to the present. Writing functions in these contexts both as a carrier of meaning and as an object of aesthetic interest in its own right. There can be little doubt that the Muslim community recognized the power and visual potential of the written word from an early stage. The first monumental inscriptions appear in the 640s, a little more than a decade after the death of the Prophet Muhammad, and reach a high level of sophistication in the mosaic decoration of the Dome of the Rock in the 690s. The talk reviews this fascinating assemblage of early inscriptions, concentrating particularly on the inclusion of explicitly religious content. This content ranges from pious phrases to statements of faith and citations from the Qur’an. These inscriptions appear on rock inscriptions, documents, coins, seals, and architecture. The talk will ask how and why scripture and statements of faith were first incorporated into Islamic monumental inscriptions, comparing the strategies employed by early Muslims to those of other faith communities of the Late Antique Middle East. The talk will argue that early Muslims were influenced by the practices of each conquered region, and that this accounts for significant differences in the manner in which inscriptions are used across the Islamic empire between the seventh and the tenth centuries.

Marcus Milwright, The Dome of the Rock and its Umayyad Mosaic Inscriptions (Edinburgh: Edinburgh University Press, 2016).

For many of the inscriptions discussed in the talk:  http://www.islamic-awareness.org/History/Islam/Inscriptions/