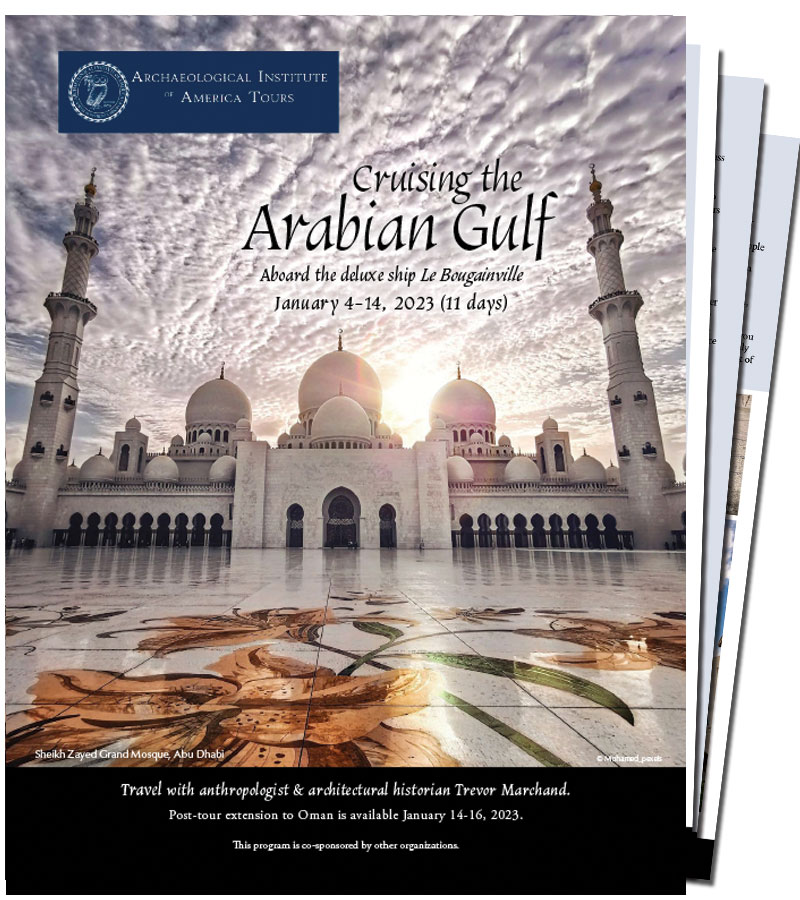 Travel with anthropologist/architectural historian Trevor Marchand on a splendid, small-ship adventure in the Arabian Gulf. Trevor has been leading study tours through the Middle East and North Africa to acclaim for many years. He will be joined by a distinguished diplomat, Elizabeth McKune, who is intimately familiar with this region.
Highlights include:

Staterooms starting at:
$7,430 Double occupancy
$9,090 Single occupancy
(Availability is limited, contact us for details – 800-748-6262 or email aia@studytours.org)
Download the detailed brochure for complete pricing and information

Enjoy two unforgettable days surrounded by breathtaking scenery from the Nizwa mountain region to the magic desert of Wahiba Sands. Between oases, fortresses, canyons, and dunes, you will experience nature, culture, and art of desert living.

Friday, January 6: Dubai city tour | Embarkation
A small coastal hamlet less than 100 years ago, Dubai has transformed itself into an irresistible modern metropolis. After breakfast at the hotel, ascend to the 124th floor of the Burj Khalifa (2,722 ft. tall, just over half a mile high) for sweeping views of the city below. Proceed to the Sheikh Mohammed Centre for Cultural Understanding and, after lunch, enjoy a photo stop at the Burj al Arab, one of the tallest hotels in the world and shaped to resemble the sail of a ship. Drive through Palm Jumeirah, Dubai’s artificial, palm tree-shaped island, before visiting the Dubai Museum for an introduction to the history of Dubai and the Emirates. Travel to The Creek for a boat ride that showcases Dubai’s mixture of old and strikingly new architecture. Explore the covered Deira Old Souq (marketplace), also known as the Spice Souq, and spend time in the famed Gold Souq before embarking Le Bougainville, our home base for eight nights. (B,L,D)

Saturday, January 7: Dubai | Sharjah
Join a full-day excursion to Sharjah, the most important port in the Arabian Gulf during the first half of the 19th century. Stop at King Faisal Mosque before visiting the Al Maraya Art Center. Take a guided tour of the “Heart of Sharjah,” a restoration project in the oldest part of the city, focused on recovering and celebrating Sharjah’s heritage. Also visit the Sharjah Museum of Islamic Civilization. (B,L,R,D)

Sunday, January 8: Sir Bani Yas
The largest natural island in the UAE, Sir Bani Yas was a barren desert island only 50 years ago. It was transformed by the vision of Sheikh Zayed bin Sultan Al Nahyan, founder of the UAE, into a wildlife reserve for animals indigenous to the Gulf region, as well as from East Africa. Board four-wheel-drive vehicles accompanied by an expert guide who will help you to look for Arabian oryx, gazelles, giraffes, hyenas, and cheetahs, and will explain the fragile ecosystem. (B,L,D)

Monday, January 9: Doha, QATAR: Museum visits, Souq Waqif
The stunningly modern and luxurious city of Doha shows no sign of reining in its ambition to be the most exciting city on the planet. Explore the shopping oasis of Souq Waqif—the ancient heart of the city with an extraordinary diversity of products for sale. Visit the I.M. Pei-designed Museum of Islamic Arts, constructed on its own island and home to the largest collection of Islamic arts in the world, including metal work, ceramics, jewelry, wood work, textiles, and glass, dating from the 7th to the 19th centuries. We will enjoy an included lunch here and then visit the Jean Nouvel-designed National Museum of Qatar, whose architecture is extraordinary and whose vast collection focuses on natural history, Bedouin culture, and oil. (B,L,D)

Tuesday & Wednesday, January 10 & 11: Abu Dhabi, UAE: City tour, Louvre Abu Dhabi
Abu Dhabi, capital of the United Arab Emirates, rivals the opulence of Dubai and is a true showcase of Arab and Islamic pride. Over the course of two days we will visit the Louvre Abu Dhabi with a collection of art spanning millennia and originating from all corners of the globe; and the Sheikh Zayed Grand Mosque, arguably the modern triumph of Islamic architecture and one of the few mosques in the region that is open to non-Muslims (except during prayer times), which is an architectural marvel comprising more than 80 marble domes and 1,000 pillars, plus a quartet of 350-foot-tall minarets. Also visit Qasr Al Hosn, dating back to the late 18th century. It is the region’s oldest heritage site, once a defensive structure, later a palace which served as a residence to the ruling Nahyan family, then the seat of government and most recently converted into a museum. Discover the Inner Fort (built in 1795) and the Outer Palace (built in the 1940s), while admiring its art and artifacts (weapons, images, maps, etc.), some dating to as early as 6000 B.C. End with a tour of Masdar City, an emerging eco-center that strives to be one of the world’s most sustainable urban developments. (B,L,D)

Thursday, January 12: Khasab, OMAN | Musandam Peninsula dhow cruise
Arrive in Khasab, a sleepy fishing village nestled among the fjords of the Musandam Peninsula, south of the Strait of Hormuz between the Arabian Gulf and the Gulf of Oman. Sail through Musandam’s longest fjord aboard local dhows, looking for the pods of dolphins that frequent these waters while admiring the majestic Hajar Mountains, the highest mountain range in the eastern Arabian Peninsula. (B,L,D)

Friday, January 13: Fujairah, UAE
Located along the eastern coast of the UAE, on the Gulf of Oman, begin your visit of Fujairah with a visit to the 16th-century Fujairah Fort, the largest and oldest castle in the country. At the Fujairah Museum, discover more than 5,000 years of archaeological and ethnographic history. Enjoy photo stops at the Al Bithnah Oasis and the ancient mud-and-stone built Al-Bidya Mosque. (B,L,D)

Saturday, January 14: Muscat, OMAN | Disembarkation | Fly home
OR Begin optional extension
We arrive in Muscat this morning and disembark in time for transfers to the airport for flights homeward. Or, begin the two-night extension in Oman. (B)

Treasures of the Oman Desert

Saturday, January 14, 2023: Muscat, OMAN | Muscat city tour | Jebel Akhdar
After breakfast aboard ship and disembarkation procedures are completed, we will explore Muscat, Oman’s capital. Begin with a visit to Sultan Qaboos Grand Mosque, a masterpiece of modern architecture with stunning carpets, chandeliers, and gardens. Drive through the old city to Al Alam Palace to view this architectural marvel between the twin forts of Jalali and Mirani. Visit the Oman National Museum whose permanent collection comprises about 12,500 artifacts from Oman dating back to the prehistoric era. After lunch at a local restaurant, we drive an hour to the Jebel Akhdar mountain range and check-in to the 5-star Anantara Al Jabal Al Akhdar Resort. Gather for dinner at the resort. (B,L,D)

Sunday, January 15:  Nizwa | Wahiba Sands
Drive to Nizwa, Oman’s capital in the 6th and 7th centuries A.D., where we explore historical buildings and the imposing Nizwa Fort, with its enormous round tower. Built in the 17th century to defend the route to the interior, the fort dominates the entire area, with the town having grown around the edifice. Access to the top is only given by means of a narrow, twisting staircase barred by heavy wooden doors, studded with metal. From the top of the tower, one can get a bird’s eye view of the city of Nizwa. Next walk through Nizwa Souq, which is renowned for its intricately hand-carved khanjar (curved daggers) and ornately-designed silver jewelry. Drive onward to the Desert Nights Camp, Oman’s only luxury desert camp, where we check-in and enjoy lunch and Bedouin hospitality. This afternoon we board four-wheel-drive vehicles and drive over dunes toward Wadi Bani Khalid, an oasis in the desert with natural clear green spring water pools. Continue driving to Wahiba Sands, a perfect example of a “Sand Sea,” with some dunes attaining a height of over 300 feet. Return to our camp, admire the sunset from the top of the dunes, and enjoy dinner. (B,L,D)

Monday, January 16: Return to Muscat | Fly home
Depart camp in the early morning for the journey back to Muscat. Stop along the way at the fascinating Bimmah Sinkhole before pausing for lunch at a local restaurant.  Arriving in Muscat in mid-afternoon, you will have time at leisure to wander through the Muttrah Souq, probably the oldest in Oman, where you may stroll the narrow lanes and admire the diversity of goods. Then transfer to the Hormuz Grand Hotel (or similar) for dayrooms and dinner before transferring to the airport in Muscat to catch flights homeward. (B,L,D)