Decorated Caves of the Pyrenees & the Rhone Valley 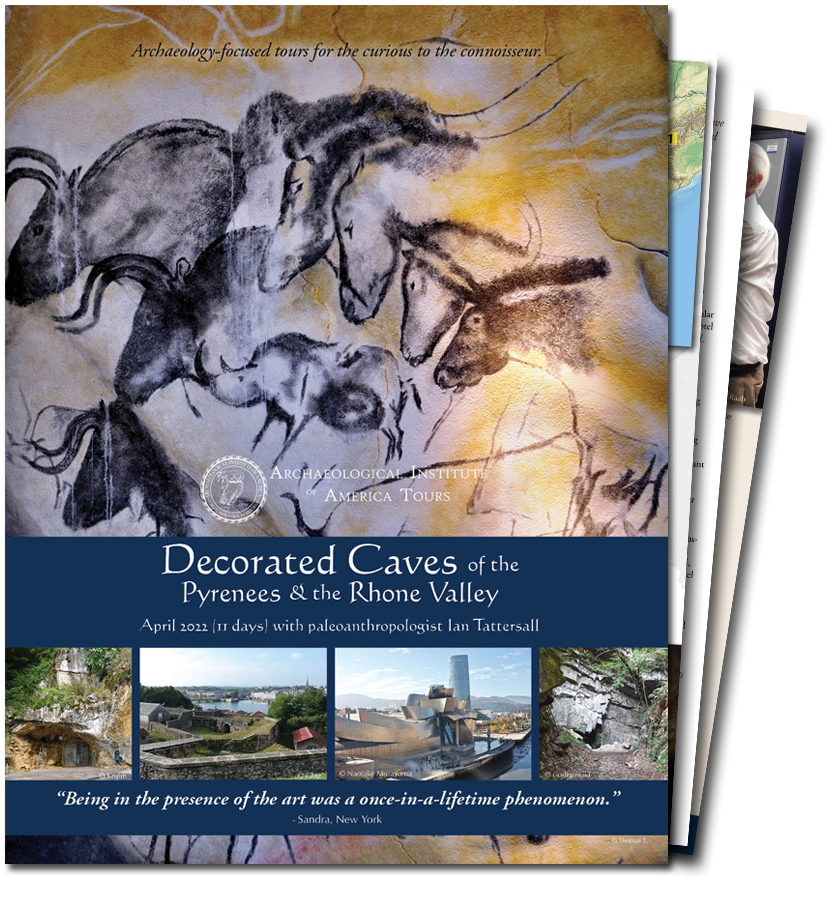 Discover a collection of magnificent but largely unheralded examples of Ice Age art while in the company of acclaimed paleoanthropologist and popular trip leader Ian Tattersall. Admire unusual, elegant bas-relief animal images in Basque caves, a profusion of hand prints at Gargas, and the famous panels of line-drawn and subtly shaded bison, horse, and ibex at Niaux. The trip concludes with a visit to the spectacular Chauvet cave replica at Vallon-Pont-d’Arc, which expertly re-creates the earliest, and perhaps most impressive, of the many masterpieces of Ice Age art dated to some 35,000 years ago. Enjoy fine food and delightful accommodations while an expert trip manager handles all the logistic.

“Ian Tattersall provided his astonishing expertise on the cave art, the Upper Paleolithic, and human evolution in general to make the entire tour an incredibly enlightening educational experience.” – Thomas, Texas

“Ian’s commentary and overall presence could not have been more engaging. He was both an archaeological authority and an excellent traveling companion.” – Richard, New York

Single room supplement will be charged when requested or required (limited availability).
With fewer than 10 participants, a small group surcharge may be added.

Paintings of bison from the Salon Noir of Niaux cave. ©HTO

The entrance to Isturitz cave. © Krijun.

Tautavel Man is a proposed subspecies of the hominid Homo erectus. Image © Rémih.

Painting of a Rhinoceros in the Chauvet-Pont-d'Arc Cave, France. © Inocybe

Friday, April 14: Bilbao | Welcome dinner
Transfer as a group (time TBD) from the Bilbao airport (BIO) to the Gran Hotel Domine, situated in the heart of this thriving city. This afternoon, admire both the architecture and the permanent collection of the spectacular Guggenheim Museum during a guided tour. Gather later at the hotel for a welcome drink and dinner. Overnight at the 5-star Gran Hotel Domine for two nights. (D)

Saturday, April 15: Covalanas | Ramales | El Pendo | Bilbao
After breakfast, drive to Covalanas cave with its extraordinary collection of animal images. After an independent lunch in nearby Ramales, continue to El Pendo cave with its nearly thirty-foot-long panel of painted figures. Dinner is at leisure in Bilbao. (B)

Sunday, April 16: Ekainberri | San Sebastian | Ainhoa, France
Check out of our hotel and head towards France, stopping first at the Ekainberri replica with its famous panels of horses, the originals dating from the Magdalenian period. Continue to the elegant Basque city of San Sebastian, situated on the Bay of Biscay. Enjoy a guided tour of the town and savor an independent lunch before moving on to Ainhoa. Gather in the evening for dinner. Overnight at the 3-star Hotel Ithurria for two nights. (B,D)

Monday, April 17: Isturitz and Oxocelhaya | Bayonne | Ainhoa
This morning, visit the caves of Isturitz and Oxocelhaya with their bas-relief sculptures and concretions. Stop for an independent lunch followed by a guided tour of Bayonne (famous for its cathedral, as well as the ham and chocolate that it produces). Return to our hotel in Ainhoa for dinner. (B,D)

Tuesday, April 18: Gargas | Aurignacian Museum | Sauveterre-de-Comminges
Check out of our hotel and drive to Gargas cave, one of the finest in the Pyrenees and known for its collection of more than 200 stenciled hand prints, many of which are mysteriously incomplete. After a group lunch in Gargas, we drive to Aurignac to visit the Aurignacian Museum, which illuminates the lives of the anatomically modern humans who lived in Europe about 36,000 years ago through finds from the rock shelter of Aurignac and other prehistoric sites. Continue on to our hotel in Sauveterre-de-Comminges, where we check-in and then gather for dinner. Overnight at the 4-star Hôtel du Barry Resort & Spa. (B,L,D)

Wednesday, April 19: Niaux | Tarascon-sur-Ariège
Check out this morning and drive to the village of Niaux for a group lunch before visiting the cave of Niaux, regarded as one of the most impressive in Europe for its spectacular and well-preserved wall paintings from 14,000 years ago, most of which are found in its “Salon Noir,” situated some 800 meters from the cave entrance. Check in to Le Manoir d’Agnes, a 200-year-old French chateau in Tarascon-sur-Ariège. Gather for dinner in the restaurant next to our hotel. Overnight at the 3-star Le Manoir d’Agnes for three nights. (B,L,D)

Thursday, April 20: Bédeilhac | Foix | Parc de la Préhistoire | Tarascon-sur-Ariège
This morning, drive a short distance to the cave of Bédeilhac, famous for its vast entrance (used as an aircraft maintenance facility in World War II) and which was decorated in the Middle Magdalenian (ca. 14,000 years ago). Have an independent lunch in the nearby town of Foix and continue on to the Parc de la Préhistoire for an overview of the area’s prehistory through its museum and numerous reconstructions and demonstrations. Return to Tarascon-sur-Ariège for an evening at leisure. (B)

Friday, April 21: Mas d’Azil | Tarascon-sur-Ariège
After breakfast, drive to Le Mas d’Azil, an ancient refuge for humans and animals, including mammoth and rhinoceros. After an independent lunch we visit the local prehistory museum. Return to Tarascon-sur-Ariège for an evening at leisure. (B)

Saturday, April 22: Arago | Tautavel | Montpellier
Check out of our hotel and drive to Arago cave, situated just outside the village of Tautavel and famous for the discovery of “Tautavel Man,” some of the most significant hominid remains ever found in Europe. After an independent lunch and, time permitting, a quick tasting of the local wine, visit the small but impressive museum in Tautavel before driving on to Montpellier. Dinner is at leisure. Overnight at the 4-star Pullman Montpellier Centre Hotel. (B)

Sunday, April 23: Chauvet cave replica | Lyon | Farewell dinner
After checking out of our hotel, drive north to what may be the highlight of our journey: the spectacular replica of Chauvet cave, Pont-d’Arc Cavern, including a reproduction of its delicately shaded horses. Chauvet is one of the most famous decorated caves in the world and is a UNESCO World Heritage Site. After an independent lunch on site, drive to Lyon. Tonight we gather for a farewell dinner. Overnight at the 5-star Le Royal Hotel Lyon. (B,D)

Monday, April 24: Lyon | Home
Transfer this morning to the Lyon airport (LYS) for flights home. (B)