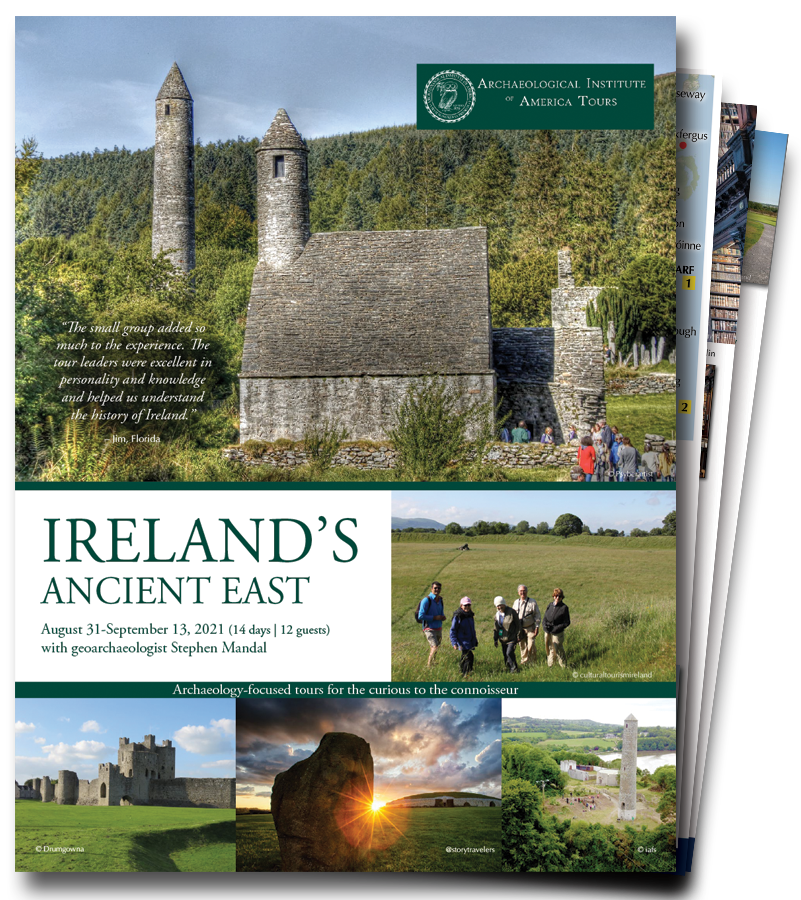 This journey takes you through the archaeology, history, and landscapes of “Ireland’s Ancient East” from north to south along the east coast of Ireland. After a few gentle days in Dublin, where you will visit the National Museum of Ireland and explore the city, you will head north to explore the various landscapes of Northern Ireland, including Slieve Gullion, the medieval town of Carrickfergus and the UNESCO World Heritage Site at the Giant’s Causeway. From here, journey south to the Boyne Valley, where you will visit, amongst other sites, the UNESCO World Heritage Site of Brú na Bóinne (Newgrange and Knowth), staying in the heart of the valley in the beautiful village of Slane. The next stop on the journey will be inland to the medieval city of Kilkenny. As well as the castle and medieval streetscape of the city, this will serve as a base to explore the wonderful scenery and amazing hidden archaeological gems of the region. Our journey south ends in Wexford and Waterford, where you will enjoy a day at the Irish National Heritage Park and visit your host’s on-going excavation project. Travel in a small group of no more than 12 travelers and enjoy the personal attention and service of a highly respected Irish academic lecturer/host and a charming tour manager/guide, plus several specialist guest experts.

Single room supplement will be charged when requested or required (limited availability). With fewer than 10 participants, a small group surcharge may be added.

Mound of the Hostages, Hill of Tara- AIA Tours, travel with the Archaeological Institute of America

Glendalough - AIA Tours, travel with the Archaeological Institute of America

Wednesday, September 1: Arrive Dublin, Ireland | National Museum of Ireland | Welcome dinner
Upon arrival at Dublin Airport (DUB), you will be met and transferred as a group (time TBD) to our hotel. After a light lunch, take a private, guided tour of the National Museum of Ireland with the museum’s former Assistant Keeper, Eamonn (Ned) Kelly. Of particular note in the collections are the Broighter Hoard, Tara Brooch, Ardagh Chalice, Derrynaflan Hoard, and a number of bog bodies. Gather this evening for a welcome talk by our hosts, a reception, and dinner. Overnight at the 4-star Herbert Park Hotel for two nights. (L,R,D)

Thursday, September 2: Dublin: AM walking tour, PM Trinity College
Founded as a Viking settlement, the Kingdom of Dublin became Ireland’s principal city following the Norman invasion in the late 12th century. This morning we take a guided walking tour of the city center, with its narrow, winding streets and mostly 18th– and 19th-century Georgian and Victorian architecture, passing key buildings and vistas that help bring the city’s history to life. After lunch (under your own arrangements) we reconvene to visit Trinity College and see the famous 9th-century Book of Kells that is on exhibit in the 18th-century library. Before dinner at our hotel this evening, our host will give a lecture on the Irish landscape and history. (B,D)

Friday, September 3: Slieve Gullion, Northern Ireland | Giant’s Ring | Belfast
Depart Dublin and start our journey northwards, stopping for a walk to the beautiful Slieve Gullion along the way. Slieve Gullion is a volcanic mountain with a height of 573 meters (1,880 ft). At the summit is a small lake and two Neolithic passage tombs, the highest surviving monuments of this type in Ireland. Slieve Gullion appears in Irish mythology, where it is associated with Fionn mac Cumhaill and Cú Chulainn. After lunch we continue driving northeast to the capital city of Belfast and check-in to our hotel in the heart of the city’s Titanic Quarter. Set out for an afternoon visit to the spectacular Giant’s Ring, a circular enclosure that is 6.9 acres and surrounded by an 11-foot-high, earthwork bank, and then return to Belfast, where we have dinner this evening. Overnight at the 4-star Titanic Hotel Belfast for three nights. (B,L,D)

Saturday, September 4: Carrickfergus | Belfast: Titanic Belfast
This morning drive the short distance to the walled medieval town of Carrickfergus. The name of the town translates as ‘rock of Fergus’ and it is believed to have gotten its name from Fergus Mór (Fergus the Great), the legendary king of Dál Riata. Carrickfergus came to prominence as a town shortly after 1170, when Anglo-Norman knight John de Courcy invaded Ulster, established his headquarters in the area and built Carrickfergus Castle. The castle, which is the most prominent landmark of Carrickfergus, is widely known as one of the best-preserved Norman castles in Ireland. Visit the castle and explore the town. Return to our hotel in Belfast and enjoy an independent lunch at a local restaurant. This afternoon we walk across the way to the Titanic Belfast, a visitor center at the head of the slipways where the Titanic was built and launched. It features nine interactive galleries focused on the “Titanic Experience,” including a collection of artifacts from the ship itself. Dinner and the evening are at leisure. (B)

Sunday, September 5: Giant’s Causeway | Dunluce Castle | Belfast
Travel through the beautiful landscape of the northern coastline to the Giant’s Causeway, a UNESCO World Heritage site comprising 40,000 basalt polygonal columns that were formed after a volcanic eruption 60 million years ago. After an independent lunch at the visitor’s center we continue on to Dunluce Castle. In the 13th century, Richard Óg de Burgh, 2nd Earl of Ulster, built the first castle at Dunluce. The castle has a remarkable and well documented history, falling into various hands over the centuries with links to Scottish clans and the Spanish Armada. We return to Belfast and gather for dinner at our hotel. (B,D)

Monday, September 6: Slane, Ireland: Hill of Slane
This morning we head south into the heart of the Boyne Valley. As the antiquarian William Wilde (father of Oscar) said, “the history of Ireland is told in the monuments along the banks of the river valley.” Visit the beautiful village of Slane and enjoy a guided visit to the Hill of Slane, atop which are the ruins of a friary church and college, including a 62-foot-high early Gothic tower. On the Hill’s west side lie the remains of a 12th-century motte and bailey castle. Check-in to our hotel, a restored, 18th-century coaching inn in Slane. Before dinner, enjoy a lecture by medieval historian, university professor, and author Dr. Michael Potterton. Overnight at the 3-star Conyngham Arms Hotel for two nights. (B,L,D)

Tuesday, September 7: Brú na Bóinne (Newgrange & Knowth) | Hill of Tara | Boyne Valley Wools | Slane
Set out this morning for the UNESCO World Heritage site of Brú na Bóinne and explore the exhibits at the Visitor Centre. Then visit the 4th-millennium B.C. megalithic passage tombs at Newgrange and Knowth. Newgrange is the largest passage mound in Europe, and encloses an astronomically-aligned, 20-yard-long inner passage leading to a cruciform chamber with a corbelled roof. (The illumination of the passage and chamber at the winter solstice sunrise is world famous.) The Great Mound at Knowth is similar in size to Newgrange and surrounded by 18 smaller satellite mounds; both sites contain the finest megalithic art in Europe. From Brú na Bóinne, we head west to the seat of the High Kings of Ireland, the Hill of Tara. Its Mound of the Hostages (a passage tomb) was constructed ca. 3000-2500 B.C., and in the early Christian period Tara was the political and religious center of Ireland. After lunch at the hill and a walk amidst the monuments, set out for Boyne Valley Wools, a traditional wool craft shop with a flock of Jacob sheep, where one can experience the process of spinning wool. Return to Slane, where dinner and the evening are at leisure. (B,L)

Wednesday, September 8: Trim Castle | Rock of Dunamace | Kilkenny
This morning we travel to the medieval town of Trim for a guided tour of the 12th-century, twenty-sided Trim Castle, Ireland’s largest and best-preserved Anglo-Norman castle. After lunch in the town, we head south to the Rock of Dunamace, which held a significant place in Ireland’s medieval past. Archaeological excavations indicate that the Rock was first settled in the 9th century when a hill fort was built, and Dunamace came to prominence after the Anglo-Norman invasion in the second half of the 12th century. From here we drive to Kilkenny City, small and compact enough to explore on foot, yet full of fascinating historical buildings and contemporary shops, design galleries, and restaurants. The evening is at leisure to enjoy dinner and explore the quaint city. Overnight at the 4-star Kilkenny Hibernian Hotel for two nights. (B,L)

Thursday, September 9: Kilkenny: Kilkenny Castle, Medieval Mile Museum | Kells Priory | Kilkenny
This morning visit one of Ireland’s most instantly recognized buildings, Kilkenny Castle, built by the Anglo-Normans in the 12th century (and remodeled in Victorian times), set in extensive parklands. Also explore the excellent Medieval Mile Museum, in the heart of the medieval city. After an independent lunch we reconvene to travel the short distance to the 12th-century Kells Priory, one of Ireland’s largest medieval monuments. The most impressive features of the Augustinian priory are the tower houses and enclosing walls (of an area just over three acres) that give the priory the appearance more of a fortress than of a monastery. Return to Kilkenny where we enjoy a lecture this evening by Prof. Muiris O’Sullivan, former Chair of Archaeology at University College Dublin. (B,D)

Friday, September 10: Knockroe | Kilmogue portal dolmen | Waterford | Hook Lighthouse | New Ross
This morning we visit Knockroe, a lesser-known but highly important Neolithic passage tomb, in the company of Prof. Muiris O’Sullivan who excavated the site. Also visit the impressive Kilmogue portal dolmen (single-chamber megalithic tomb) before continuing on to the Viking town of Waterford, where we visit Reginald’s Tower, the oldest civic building in Ireland (in continuous use for more than 800 years), and its permanent exhibition on the treasures of Viking Waterford. After lunch we continue to the Hook Peninsula, in the southeast corner of Ireland, where we find the Hook Lighthouse, the oldest operational lighthouse in the world (at over 800 years old), in a dramatic setting. End the day with a drive to the town of New Ross, and settle in to our hotel before dinner. Overnight at the 4-star Brandon House Hotel for two nights. (B,L,D)

Saturday, September 11: Ferrycarrig: Irish National Heritage Park, Carrick Ringwork excavation | New Ross
Today travel a short distance to the Irish National Heritage Park in Ferrycarrig, a 35-acre, open-air museum that depicts 9,000 years of Irish history, from the prehistoric through Norman periods, and features various structures typical of each period. Enjoy a lunch cooked using a fulacht fiadh (“burnt mound”), a style of open-air cooking place that dates to the Bronze Age. Afterward we visit the “Digging the Lost Town of Carrig Project,” where archaeological research and teaching excavations at the Carrick ringwork are being conducted by the Irish Archaeology Field School. Learn firsthand about the latest discoveries from your host, Stephen Mandal, and his co-director Dr. Denis Shine. Return to New Ross, where dinner and the evening are at leisure. (B,L)

Sunday, September 12: Glendalough | Killiney, Dublin | Farewell dinner
Depart New Ross and head north, crossing the Wicklow Mountains to the iconic, 7th-century monastery at Glendalough, set in a beautiful U-shaped glacial valley at the side of a lake. Visit the wonderful interpretive center and explore the monastery’s ruins. Continue to our hotel in a coastal suburb on the south side of Dublin for a relaxing final night and farewell dinner. Overnight at the 4-star Fitzpatrick Castle Dublin. (B,L,D)