Treasures of the Mediterranean World 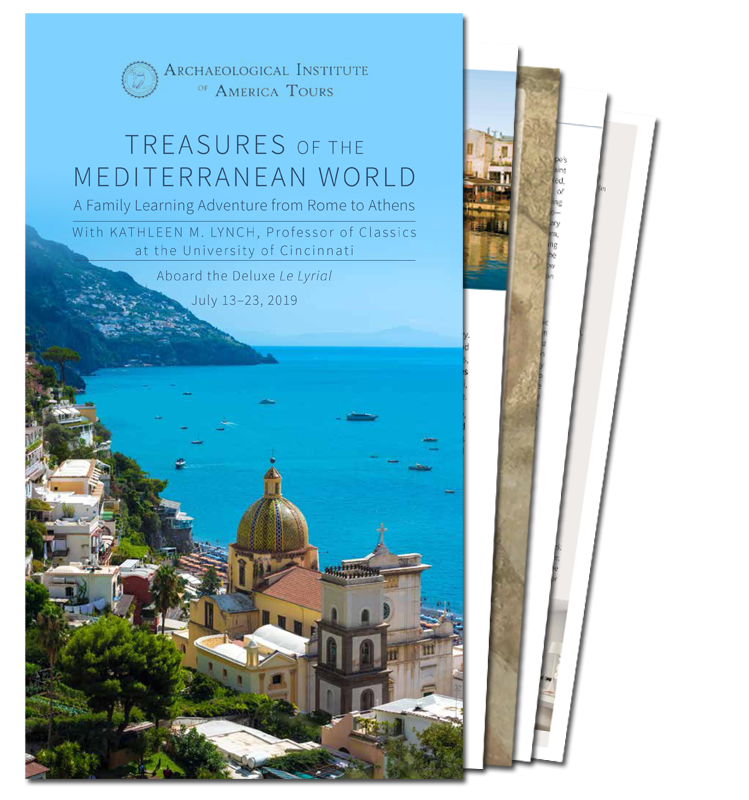 A Family Learning Adventure from Rome to Athens (cruise)

Next summer, embark on a voyage of discovery from Italy to Greece and Turkey. Cruise aboard the luxurious Le Lyrial, with only 122 staterooms and suites, allowing the whole family to travel with ease and in great comfort. Grandparents, parents, and children alike will learn about Greek and Roman history, literature, mythology, and culture while exploring these countries where ancient cities, idyllic islands, mythology, and history are intertwined. Discover many of the most important sites of the ancient Greece and Rome, such as the Colosseum, Pompeii, Olympia, Ephesus, and Athens’ Parthenon, plus the iconic islands of Santorini and Crete.

Experienced youth education counselors will lead groups of similarly-aged children and young adults (8 to 17 years old) in the Young Explorers Program™—educational and recreational activities developed to enhance kids’ appreciation of the sites visited, from discovering how archaeologists piece together the past to competing in a mock Olympics on its original grounds. Meanwhile, AIA host and popular lecturer Kathleen M. Lynch, Professor of Classics at the University of Cincinnati, will enrich the adults’ travel experience through lectures and informal discussions about archaeology, mythology, and life in the ancient world. Also onboard will be guest lecturer Jason Weiser, host of the popular “Myths and Legends” podcast.

Aboard the 122-stateroom/suite Le Lyrial

Sunday, July 14: ROME, ITALY
Transfer to the hotel Westin Excelsior Rome, located in the Via Veneto district. In the evening, gather with fellow travelers for a Welcome Reception at the hotel, where Professor Kathleen Lynch and our Young Explorertm Counselors will introduce you to the program ahead. (R)

Monday, July 15: ROME | CIVITAVECCHIA | EMBARK
Travel to the center of old Rome for a tour of the Colosseum and Forum, where important events in the history of the Republic and the Empire are memorialized. In the afternoon, transfer and embark Le Lyrial. (B,L,D)

Tuesday, July 16: SALERNO | POMPEII & HERCULANEUM
The excursion for adults leads to Pompeii and Herculaneum, Roman cities both destroyed and preserved by the eruption of Mount Vesuvius in a.d. 79. No other sites so completely capture the character of life in the early Roman Empire. Children head to a farm in the Sorrentine Hills, where they learn about the cultivation of oranges, lemons, olives, and grapes, as well as the making of mozzarella, before visiting Pompeii in the afternoon. (B,L,D)

Thursday, July 18: KATAKOLON, GREECE | OLYMPIA
Olympia is an ancient sanctuary dedicated to Zeus and one of four sites where the Panhellenic games were held. Tour the sacred area. Young Explorerstm will be invited to compete in mock Olympic Games staged for them on the site of the ancient games. (B,L,D)

Friday, July 19: RETHYMNON, CRETE | KNOSSOS
Crete was once home to the Minoans, Europe’s earliest developed civilization. From quaint Rethymnon, travel to Knossos and its fabled, partially-reconstructed Palace—a maze of frescoed corridors and chambers showing life as it may have been four millennia ago—and home to the labyrinth of the legendary Minotaur. Also visit the Heraklion Museum, which houses treasures from Knossos. Young Explorerstm may choose to hike a portion of the Imbros Gorge on a guided walk through narrow passages lined with caves. The walk ends on the coast for a swim. (B,L,D)

Saturday, July 20: SANTORINI
In the second millennium b.c., volcanic eruptions shrouded Santorini (or Phira) in pumice and ash and collapsed the island into a fractured caldera. This explosion led to Santorini’s wild, multihued beauty while sending its Minoan civilization into irreversible decline. Adults will visit the stunning archaeological site of Akrotiri and the Prehistoric Museum, while Young Explorerstm board a sailboat to Nea Kameni, the island in the center of Santorini’s caldera, where they hike to the summit of the volcano to learn about the area’s geology. Families reunite in Phira Town for lunch and free time. (B,L,D)

Sunday, July 21: KUSADASI, TURKEY | EPHESUS
Renowned as the center of worship of the goddess Cybele, later known as Artemis, Ephesus was also the site where St. Paul addressed the Ephesians. Excavations continue and archaeologists are restoring the Terrace Houses, which offer a glimpse of daily Ephesian life. See the façade of the Library of Celsus, Temple of Hadrian, and the Great Theater. (B,L,D)

Monday, July 22: ATHENS, greece | DISEMBARK
Disembark Le Lyrial in Athens to explore the Acropolis, perhaps one of the most important ancient monuments in the Western world, and the stunning Acropolis Museum. After lunch at a taverna, adults visit the ancient Agora, while Young Explorerstm discover the city on an iPad-based interactive game to complete “The Labors of Hercules.” Spend the night at the Divani Caravel hotel. (B,L,D)