Morocco: From the Desert to the Sea 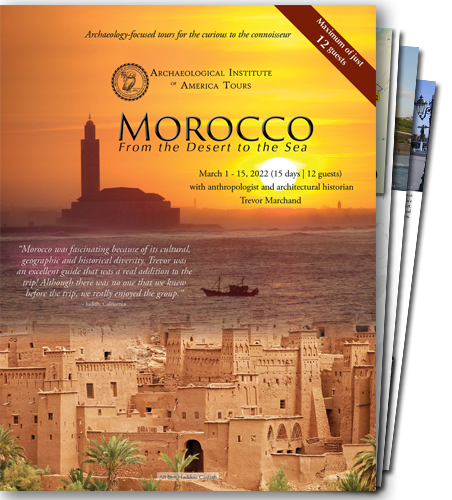 Join us for a unique look at the history, architecture, archaeology, and art of Morocco in the company of Professor Emeritus Trevor Marchand and a professional national guide/tour manager. Explore the magnificent landscapes that helped form the country’s ancient and modern cultures, from the wild Atlantic coast to the High Atlas Mountains, dense cedar forests, and vast Sahara Desert. It is a land of extraordinary contrasts, and on this custom-designed itinerary you will visit all of the country’s best-known historic sites, including six that are inscribed on UNESCO’s World Heritage List, as well as bustling casbahs, medinas, and souks.

Single room supplement will be charged when requested or required. With fewer than 8 participants, a small group surcharge may be added.

Village in the Saharan dunes of the Erg Chebbi. © Rosino

One of the well-preserved mosaics at Volubilis. © Jerzy Strzelecki

“Morocco was fascinating because of its cultural, geographic and historical diversity. Trevor was an excellent guide that was a real addition to the trip! Although there was no one that we knew before the trip, we really enjoyed the group.”
– Judith, California

Wednesday, March 2: Arrive Casablanca, Morocco | Transfer to hotel | Introductory lecture
Arrive today at Casablanca’s Mohammed V International Airport (CMN) where you will be met for individual transfers to our hotel. For those arriving in the morning, this afternoon you may choose to join a short bus tour of the Ville Nouvelle and see the area’s colonial planning and architecture plus the Hassan II Mosque, or spend the afternoon at leisure. Late this afternoon we will gather at the hotel for an orientation and introductory lecture. Dinner is on your own this evening. Overnight at the 5-star Hyatt Regency Casablanca.

Thursday, March 3: Rabat walking tour – part one, Archaeological Museum | Welcome dinner
This morning we drive from Casablanca to the stately capital city of Rabat, a UNESCO World Heritage site. We start with a stroll through the Chellah fortress, its lush gardens, Roman remains, and the 14th-century necropolis of the Merenid Dynasty. After lunch we visit the country’s sole archaeological museum, renowned for its prehistoric and Roman collections. This evening we gather for a welcome dinner in a private home. Overnight at the 5-star Hôtel la Tour Hassan Palace for two nights. (B,L,D)

Friday, March 4: Rabat walking tour – part two | Salé | Rabat
This morning we visit the Royal Palace squares and gardens as well as the Mohammed VI Museum of Modern and Contemporary Art (MMVI), whose permanent displays include works by Moroccan artists from the 1950s to today. Then take a leisurely walk through Rabat’s whitewashed Oudaïa casbah (North African citadel), Andalusian Garden, and Oudaïa Gate, an example of Almohad Dynasty architecture. After lunch at the marina we cross the Bou Regreg River from Rabat to Salé, an old walled city, where we visit the restored, 14th-century medersa (religious college), a gem overlooked by mass tourism. We then return to Rabat and visit its 12th-century Hassan Tower and the mausoleum of modern Morocco’s “father,” Mohamed V. Dinner is on your own this evening. (B,L)

Saturday, March 5: Volubilis | Meknes | Fes
Depart Rabat for the ruins of Volubilis, a UNESCO World Heritage site that was Rome’s commercial hub for northwestern Africa until the 3rd century A.D., with well-preserved mosaics that are still in situ. After lunch we explore the Imperial City of Meknes, which 17th-century Sultan Moulay Ismaïl built as his capital. Today Meknes is a UNESCO World Heritage site, and we will see the immense granary Ismaïl built to feed the city’s population and his 12,000 horses in the event of up to a year-long siege; as well as the classically-decorated, 14th-century Bou Inania Medersa. Continue on to the intellectual and spiritual capital (and UNESCO World Heritage site) of Fes. Check-in to deluxe rooms at our boutique hotel, comprised of three vast, former homes (now connected and converted) in the old city. Freshen up and then gather for dinner at the hotel, which has one of the finest traditional restaurants in northern Morocco. Overnight at the 4-star Le Riad Maison Bleue for three nights. (B,L,D)

Sunday, March 6: Fes walking tour – part one
Take a morning walking tour through 9th-century Fes el-Bali (“Old Fes”), considered by scholars to be the best example of a typical  medieval Arab city. Begin the day at the ruins of the Merenid tombs for a panoramic view over Fes. Walk to the 14th-century Medersa Bou Inania; the mausoleum to city founder Idriss II; the area of the world’s oldest functioning university, the Qaraouine; the 17th-century Nejjarine caravansary, now an exquisite Museum of Wooden Arts and Crafts; and (if it has reopened after restoration work) the 14th-century El Attarine Medersa. After lunch in Old Fes, visit the Seffarine (coppersmiths’ quarter), Sabbaghin (dyers’ quarter), and Dabbaghin (tanners’ quarter) before taking a driving tour of the ramparts. This evening, dinner is at the city’s finest French restaurant. (B,L,D)

Monday, March 7: Fes walking tour – part two
This morning we drive to the lush Jnan Sbil (Bou Jeloud Gardens) and see its medieval irrigation system. We then visit Fes el Jedid (“New Fes”), with its Alouite Palace Gate, and stroll through the walled Jewish quarter (“Mellah”), where we visit the restored, 17th-century Danan Synagogue and the cemetery. After lunch, visit a zillij tile workshop. Dinner is on your own this evening. (B,L)

Tuesday, March 8: Atlas Mountains | Arfoud
Depart Fes this morning for a long day of driving through fascinating, ever-changing landscapes as we cross the Atlas ranges all the way to the edge of the Sahara. We begin with the Middle Atlas and its last forests of giant Mediterranean cedars, passing mountain station Ifrane, site of Africa’s most esteemed international university, and stopping in the heart of the forest to look for the indigenous Barbary macaques (of Gibraltar fame). After a break for lunch in the Berber enclave of Midelt, we cross the wild, multi-hued expanses of the Eastern High Atlas, down the dramatic Ziz Valley, to the administrative center of Arfoud. Gather for dinner at our hotel this evening. Overnight at the 5-star Hôtel Palais du Désert for two nights. (B,L,D)

Wednesday, March 9: Sijilmassa | Ksar Oulad Abd al Halim | Erg Chebbi Dunes | Arfoud
Today we explore the Tafilalet Oasis, Morocco’s largest, and its ruins of Sijilmassa, Africa’s once-immense “City of Gold.” Continue on to visit the ruined 18th-century walled compound of Ksar Oulad Abd al Halim, where early Alaouite rulers kept their families, and visit the mausoleum of Moulay Ali Sharif. After a picnic lunch of local Saharan specialties, visit Achour Fossils Erfoud, a factory that produces all manner of decorative fossil marble items. Late this afternoon we will take four-wheel-drive vehicles out to the great Erg Chebbi Dunes, rising 600 feet above the desert floor. Scramble (or take a camel, if you prefer) up the dunes to witness the sun set over the Sahara, and then gather for dinner. (B,L,D)

Thursday, March 10: Todgha River Gorge | Tinghir | Ouarzazate
Departing Arfoud this morning, we drive west along desert hills to the narrow, 1,000-foot-deep Todgha River Gorge, and then walk through the 16th-century adobe casbah of Tinghir. After lunch we drive to the international filming center of Ouarzazate, whose exotic surroundings were first used in the film Lawrence of Arabia. Upon arrival we visit the partially-restored Taourirt Kasbah (the former palace of the el Glaoui clan, built in the 19th century) and then check-in to our hotel, where dinner is a buffet. Overnight at the 5-star Le Berbere Palace. (B,L,D)

Friday, March 11: Casbah of Aït ben Haddou | Marrakech
At 7:00 am we depart Ouarzazate and drive to the Aït ben Haddou casbah, a World Heritage site and oft-used film backdrop (e.g. Gladiator). Continue driving north (about 4.5 hours), over the spectacular Tizi-n-Tichka Pass, with views over deep verdant vales and their adobe hamlets. Arrive in legendary Marrakech in time for lunch at our hotel, one of the city’s finest boutique properties, located just inside the medina of Marrakech (a UNESCO World Heritage site). Afterward, we explore a couple of the city’s highlights: the Bahia Palace of vizier Ba Ahmed, a prime example of Moorish-Andalusian art that is spread over 20 acres; and the recently-opened Dar el Bacha Museum, located in a historically important building. Gather this evening for a superb Moroccan dinner in the heart of the medina. Overnight at the 5-star La Maison Arabe for four nights. (B,L,D)

Saturday, March 12: Marrakech walking tour
After seeing the 12th-century Koutoubia minaret, a masterpiece of Almohad Dynasty architecture, this morning is dedicated to exploring Marrakech’s vast, reed-covered bazaars, where all types of crafts are still fashioned by hand. Two sites of special interest are the Souk des Teinturiers (wool-dyers), also known as Souk Sebbaghine; and the courtyard of the fascinating Zawiya (shrine) of holy man Sidi Bel-Abbes, patron saint of the blind. After a Continental lunch in the medina, take a stroll in the Jardin Majorelle, the exotic, 12-acre garden created in the 1930s and restored by the late Yves St. Laurent, and visit its exquisite Museum of Berber Culture. Dinner is on your own this evening, for a chance to sample the city’s array of excellent eateries. (B,L)

Sunday, March 13: Marrakech | Aghmat | Marrakech | Farewell dinner
Begin the day with a visit to the imposing Bab Agnaou, one of Marrakech’s 19 original gates. Continue on to the Saadian Dynasty’s ruined El Badi Palace and the necropolis of the Saadians, the last window into the splendor of early 17th-century Moroccan interior art, with its finely sculpted plaster, cedar panels, and Carrera marble. After a short stroll in the Jewish Mellah, including a visit to its synagogue, and lunch, we drive to the site of Aghmat, the first capital of the Almoravid Dynasty, which was only recently uncovered and is still closed to the public while excavation continues. Gather this evening for a farewell dinner. (B,L,D)

Tuesday, March 15: Marrakech | Fly home
Transfer as a group or individually this morning, times to be determined, to Marrakech Menara Airport (RAK) for flights homeward. (B)