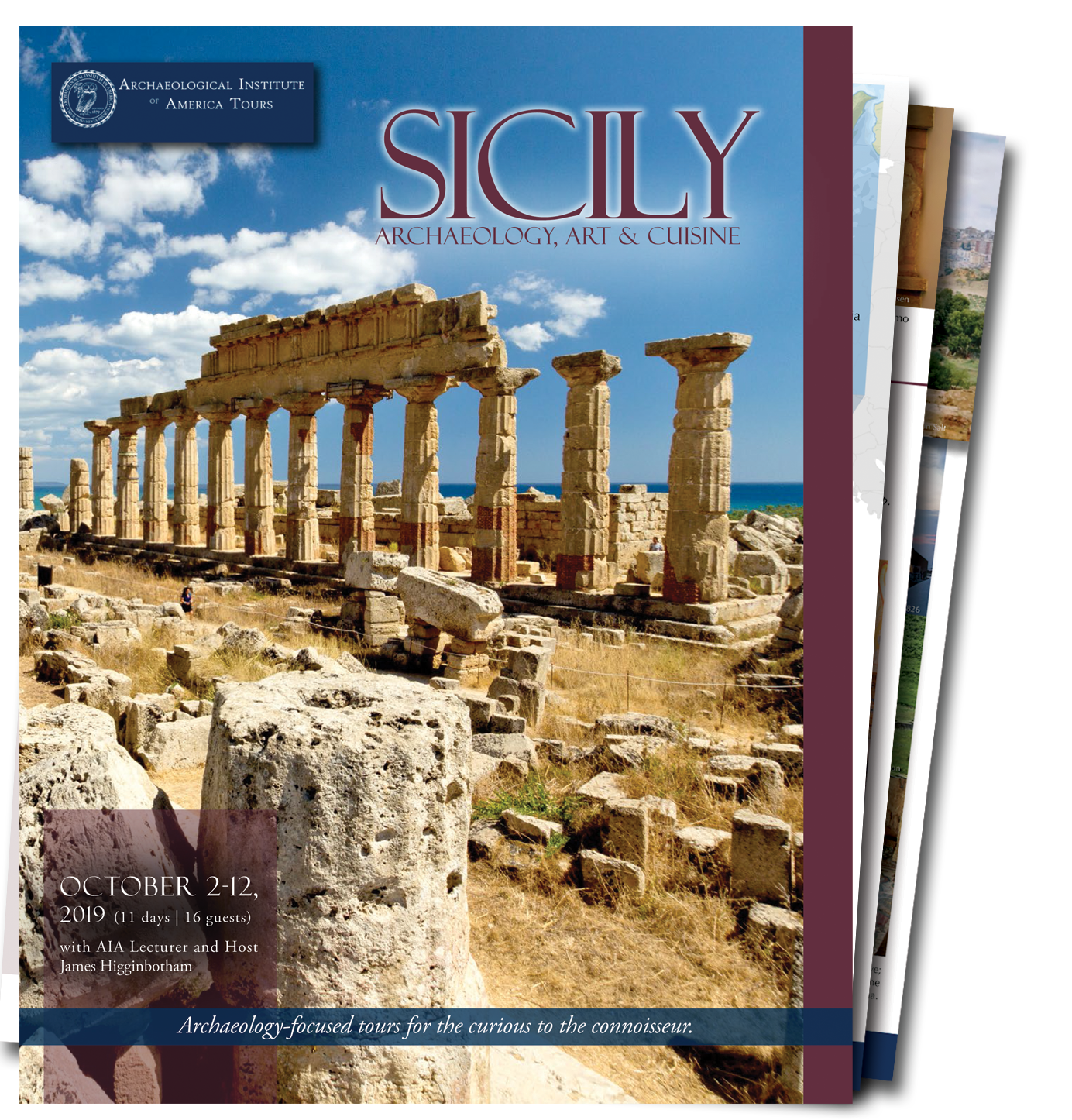 Travel with our engaging AIA lecturer and host, archaeologist James Higginbotham. Discover and learn about many of the most impressive archaeological monuments found anywhere in the Mediterranean, such as Agrigento, Selinunte, Segesta, and Syracuse. Admire spectacular, sunlit landscapes of undulating vineyards and Mediterranean Sea vistas. See two of the finest examples of Norman architecture: Monreale Cathedral and the Royal Palace of Palermo (Palazzo dei Normanni). View extensive archaeological collections at several excellent museums. Savor fine cuisine, with wine included at group dinners. Feel pampered with seven nights at 5-star hotels and two nights at a four-star hotel, all chosen for their generous comfort and prime locations. Relax and enjoy traveling with a maximum of just 16 guests plus your expert lecturer, trip manager, and local guides.

Choose to extend your trip for three nights to discover Malta’s renowned and extraordinary prehistoric monuments.

Single room supplement will be charged when requested or required. With fewer than 10 participants a small group surcharge may be applied.

Coastline of Ortygia, the historic center of Syracuse © Fausto Schiliro

Thursday, October 3: Arrive Palermo | Private transfer to hotel | Orientation meeting
Upon arrival at Palermo’s Falcone Borsellino Airport (PMO), you will be met and transferred privately to our hotel in Palermo’s city center. Take some time to relax before gathering for an introductory lecture and orientation meeting. Dinner is on your own this evening. Overnight at the 4-star Grand Hotel Piazza Borsa for two nights.

Friday, October 4: Palermo: Royal Palace of Palermo & Cappella Palatina, Archaeological Museum | Welcome dinner
Set out on foot for a guided tour of the city of Palermo, a UNESCO World Heritage site since 2015 (together with the Cathedral Churches of Cefalù and Monreale; we will visit the latter tomorrow). Stroll through the Royal Palace of Palermo (Palazzo dei Normanni) and its spectacular, mosaic-filled chapel (Cappella Palatina). After an independent lunch in one of Palermo’s many trattorias, we re-group to spend the afternoon exploring the Regional Archaeological Museum Antonio Salinas, hosting one of the largest Italian collections of artifacts from Sicily ranging from prehistory to the Middle Ages. This evening we gather for a welcome reception and dinner at a local restaurant. (B,R,D)

Saturday, October 5: Monreale | Winery lunch | Segesta | Erice | Marsala
This morning we drive to nearby Monreale to visit its famous cathedral, one of the world’s greatest extant examples of Norman architecture. Wander through Moorish-style arcades and examine its exquisite, gold mosaics illustrating biblical tales. After lunch at a local winery, visit Segesta’s well-preserved 5th-century B.C. Doric Greek temple and 3rd-century B.C. Greek theater, scenically set on Mount Barbaro. Continue to Erice, whose walled, medieval town is perched on a mountain with a striking view over the port of Trapani and sea. End our day with an early dinner at a local restaurant before driving to Marsala, where we check-in to our hotel. Overnight at the 5-star Grand Hotel Palace for two nights. (B,L,D)

Sunday, October 6: Island of Mozia | Marsala: Archaeological Museum
Board a private boat and set out for the Stagnone Nature Reserve, home to a mini archipelago the centerpiece of which is the small Island of Mozia (ancient Motya). Originally settled by the Phoenicians in the 8th century B.C, it was sacked by Syracuse in the 4th century B.C. Take a leisurely walking tour of the island to see some of the archaeological remains and also visit the Whitaker Museum, which houses a unique collection of Phoenician artifacts and Greek vases found on the island. Return to the mainland for lunch, and then explore Marsala’s Regional Archaeological Museum Baglio Anselmi, which houses artifacts from Motya and ancient Lilybaeum (modern Marsala), including the wreck of a 3rd-century B.C. Punic warship that was found near Marsala in 1969. Dinner is on your own this evening. (B,L)

Monday, October 7: Selinunte | Agrigento
Depart Marsala this morning for Selinunte (ancient Selinos), perched on a clifftop overlooking the sea. This was the westernmost Greek colony, established in the 7th century B.C., and today its vast ruins comprise temples, fortifications, and houses. After a casual seaside lunch we drive to Agrigento, founded as a Greek colony in the 6th century B.C., and settle in to our hotel overlooking the ancient Valley of the Temples. Gather for dinner this evening. Overnight at the 5-star Hotel Villa Athena for two nights. (B,L,D)

Tuesday, October 8: Agrigento: Archaeological Museum, Valley of the Temples
Spend this morning exploring the Regional Archaeological Museum of Agrigento, which displays over 5,500 artifacts from the prehistoric through the Greco-Roman periods. Particularly noteworthy are the kouros (Archaic Greek statue) known as the “Ephebe of Agrigento,” and the giant Telamon (load-bearing statue) from the Temple of Olympian Zeus. After an independent lunch we explore the striking Valley of the Temples, a UNESCO World Heritage site, with very well-preserved Doric Greek temples to Concordia, Hera, Herakles, and more. Return to our hotel and gather for dinner this evening. (B,D)

Wednesday, October 9: Morgantina | Archaeological Museum of Aidone | Piazza Armerina | Syracuse
Venture into the heart of Sicily and explore the archaeological site of Morgantina, where our AIA study leader has been Co-Director of the American excavations at Morgantina since 1990. Also visit the nearby Archaeological Museum of Aidone, in a former Capuchin monastery, which houses artifacts from Morgantina including the beautiful, 5th-century B.C. “Venus of Morgantina” statue. After an independent lunch in the charming village of Aidone, drive to the nearby UNESCO World Heritage site of the Villa Romana del Casale, near the town of Piazza Armerina. The villa’s exquisite mosaics—some of the best preserved in the Roman world—were buried in mud for centuries until they were rediscovered in the late 19th century. Continue on to Syracuse, a city that once rivaled ancient Athens in terms of culture and economic strength, where we check-in to our hotel on Ortygia, a small island that is Syracuse’s historical center, and gather for dinner. Overnight at the 5-star Grand Hotel Ortigia for three nights. (B,D)

Thursday, October 10: Syracuse: AM at leisure | PM walking tour of Ortygia
Enjoy a morning and lunch at leisure to relax or pursue individual interests. This afternoon we gather for a walking tour of Ortygia, which was colonized by Greeks from Corinth in 734 B.C. This is part of the UNESCO World Heritage site “Syracuse and the Rocky Necropolis of Pantalica.” Call at the massive Cathedral with a Baroque façade, built in the local white stone over a 5th-century B.C. Temple of Athena. See the 6th-century B.C. Temple of Apollo, which served as a church, mosque, and military barracks at various points throughout its history. Meet a local artisan who makes by hand pupi (marionettes), and learn about opera dei pupi, a theatrical marionette representation of Frankish romantic poems that is one of Sicily’s characteristic cultural traditions. Dinner is on your own this evening. (B)

Friday, October 11: Syracuse: Neapolis Archaeological Park, Archaeological Museum | PM at leisure | Farewell dinner
Spend the morning exploring the Parco Archeologico della Neapolis (Neapolis Archaeological Park), which includes the well-preserved, 5th-century B.C. Greek theater, with a 16,000-person capacity; and the Orecchio di Dionisio (Ear of Dionysius), a limestone cave that was named after its similarity in shape to the human ear (not to mention the impressive acoustic effects of the cave) and the tyrant Dionysius, who kept prisoners in the adjacent quarry. End the morning with a visit to the modern Paolo Orsi Regional Archaeological Museum, with one of Sicily’s largest and most interesting archaeological collections, documenting the island from prehistory to the late Roman period. Enjoy lunch on your own and the afternoon at leisure to relax, pack, or perhaps do some last-minute shopping. We gather this evening for a festive farewell dinner overlooking the Mediterranean. (B,D)

Saturday, October 12: Fly home OR Continue on the optional Malta extension
Travelers who are not continuing on the optional extension to Malta will be transferred privately this morning to Catania-Fontanarossa Airport (CTA) for their flights homeward. (B)

Saturday, October 12: Syracuse, Sicily | Ferry to Valletta, Malta | Mdina | Ħaġar Qim & Mnajdra Temples | San Ġiljan
This morning we depart Syracuse for Pozzallo, where we catch a ferry to the island nation of Malta. (The trip takes less than two hours.) Malta’s strategic location in the center of the Mediterranean has endowed it with a myriad of cultural influences and a long, fascinating history. Upon arrival in Valletta, Malta’s capital city, we drive to the hilltop, walled city of Mdina, whose ancient streets, built to protect residents from high temperatures and approaching enemies, are a succession of curves and crossroads. Walk to St. Paul’s Cathedral, one of Malta’s most important examples of Baroque architecture, and to St. Paul’s Catacombs, a complex of underground rock-cut tombs and passages that represent the earliest evidence of Christianity on Malta.
After lunch at a local restaurant we drive to the UNESCO World Heritage sites of Ħaġar Qim and Mnajdra (part of the “Megalithic Temples of Malta”). Ħaġar Qim stands on a hilltop overlooking the sea and the islet of Fifla, and at the bottom of the hill is Mnajdra. First excavated in 1839, the remains date to between 3600-3200 B.C., a period known as the Ġgantija phase in Maltese prehistory. Transfer to our seaside hotel in San Ġiljan (St. Julian’s) and gather for dinner at a local restaurant. Overnight at the 4-star Hotel Golden Tulip Vivaldi for three nights. (B,L,D)

Sunday, October 13: Valletta walking tour, National Museum of Archaeology | Ħal Saflieni Hypogeum | Tarxien
This morning we explore Valletta, a UNESCO World Heritage site, during a guided walking tour. Enjoy a wonderful panoramic view of the city from the Upper Barakka Gardens, and then visit St. John’s Co-Cathedral, featuring impressive Baroque architecture and precious works of art. Continue to the National Museum of Archaeology, which exhibits a spectacular range of artifacts from Malta’s Neolithic (5000 B.C.) to Phoenician (400 B.C.) periods. After an independent lunch we visit the Ħal Saflieni Hypogeum, a UNESCO World Heritage site that was discovered in 1902. In the interest of the site’s conservation, only 80 visitors are allowed per day, and we will be among them. The Hypogeum is a prehistoric burial complex made up of interconnecting, rock-cut chambers on three levels, and was in use from about 4000-2500 B.C. End our fascinating day at Tarxien, part of the “Megalithic Temples of Malta” UNESCO World Heritage site, which dates from 3600-2500 B.C. and is renowned for its detailed carvings. Return to our hotel in San Ġiljan and enjoy dinner at leisure. (B)

Monday, October 14: Gozo: Ggantija, Cittadella, Museum of Archaeology | Farewell dinner
Set out early today to visit Malta’s sister island of Gozo, barely 20 minutes from the mainland by ferry. Our explorations begin at the two temples at Ggantija, part of the “Megalithic Temples of Malta” UNESCO World Heritage site, which date from about 3600 to 3200 B.C. Stroll through the Cittadella (Citadel), a small, fortified town in the island’s center that was first settled in the Bronze Age; take some time for an independent lunch; and re-group to visit the Gozo Museum of Archaeology, which illustrates the cultural history of Gozo from prehistory to the early modern period. Return by ferry to Malta and drive to our hotel in San Ġiljan. This evening we gather for a farewell dinner at a local restaurant. (B,D)

Tuesday, October 15: Fly home
This morning you are transferred privately to Malta International Airport (MLA) for flights homeward. (B)