Ancient Wonders of the Turkish Coast 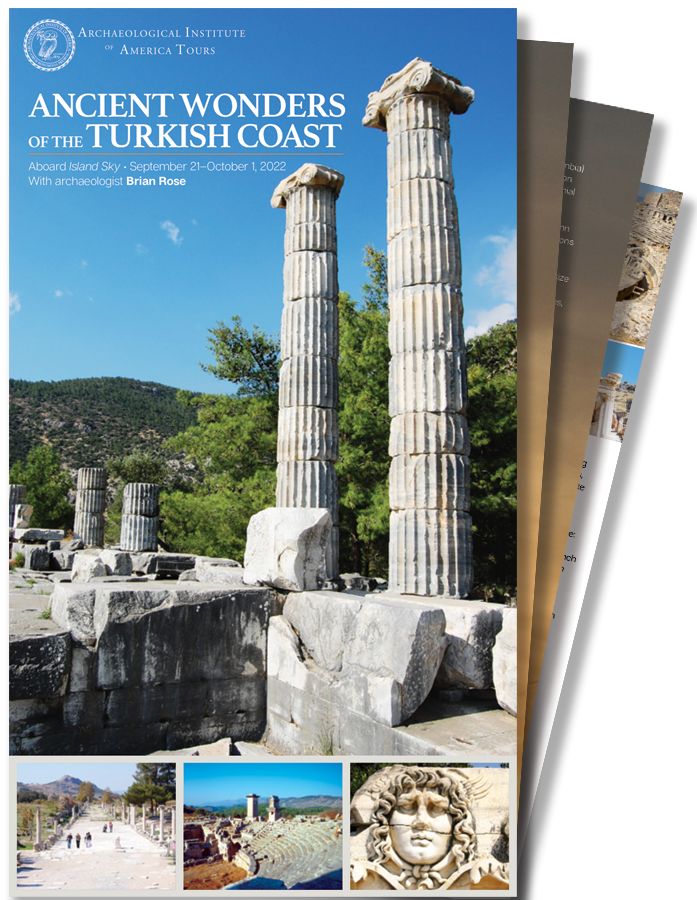 I invite you to join Archaeological Institute of America lecturer and host C. Brian Rose to visit extraordinary ancient Greek, Roman, Byzantine, and Ottoman sites. Brian Rose is a supremely engaging lecturer who has been excavating in Turkey for decades, and is former co-director of the excavations of Troy.

Your journey begins with one hotel night in Istanbul and visits to some of the city’s highlights; followed by an eight-night cruise aboard the lovely, 59-cabin, all-suite Island Sky. Cruise along the Aegean coast of Turkey toward Cyprus, calling en route at Troy, of Iliad fame; and the fabulous archaeological sites of Pergamon, Ephesus, Didyma, Priene, and Miletus. Along Turkey’s Mediterranean coast, explore the Lycian Peninsula sites of Xanthos and Patara, and the spectacular Roman theater at Aspendos.

Also available are a two-night, pre-trip extension in Istanbul, the incredible city that bridges the Eastern and Western worlds and was an imperial capital for nearly 1,600 years; and a two-night, post-trip extension in Cyprus, including time in Limassol and Larnaca.
This program is limited to only 95 travelers and is co-sponsored by other organizations, so I urge you to reserve your preferred cabin today by calling AIA Tours at (800) 748-6262 or emailing aia@studytours.org.

Download the detailed brochure for complete pricing and information.

Friday, September 23: Istanbul
After breakfast, attend a brief orientation followed by the first lecture on the program, then witness the
magnificent Hagia Sophia and royal Topkapi Palace. After a sumptuous local lunch, see the iconic Blue Mosque and nearby Hippodrome. In the late afternoon, embark Island Sky, our home for the next eight
nights. Enjoy a festive welcome reception and dinner on board. ISLAND SKY (B,L,R,D)

Saturday, September 24: Çanakkale / Troy
The morning is spent cruising with an opportunity to continue the lecture series. After lunch, disembark for the world renowned site known as Troy, the historic city of the Trojan War as described in Homer’s
epic poem, the Iliad. Visit the ancient site of Troia and its layered ruins that are still being actively excavated, including a stop at the nearby museum. ISLAND SKY (B,L,D)

Sunday, September 25: Pergamon
Spend the day exploring the ancient Greek site of Pergamon, once a powerful and thriving cultural center, now one of Turkey’s finest archaeological destinations. Ascend by gondola to the acropolis to explore the ruins of a powerful Hellenistic city perched high on the hillside. Explore the 10,000-seat theater; Temples of Athena, and Trajan; Altar of Zeus; and the foundations of the meticulously planned city. Also see the Asclepion, an ancient healing center which thrived during the 2nd century A.D. Continue to the modern town of Bergama to visit its archaeological museum before returning to the ship. ISLAND SKY (B,L,D)

Monday, September 26:  Kusadasi / Ephesus
Call at the bustling port city of Kusadasi for the short drive to Ephesus. An important port city and trading and intellectual center from archaic to Roman times, Ephesus is one of the more complete ancient sites in the region, where more than 150 years of excavating have revealed broad streets,
impressive buildings, intricate mosaics, towering temples, and possibly the largest theater in the ancient world. Today’s excursion options are: (1) Spend the day exploring Ephesus, including a local lunch
and a folkloric demonstration of dance and weaving; (2) Tour Ephesus in the morning and visit the museum before returning to the ship for lunch and an afternoon at leisure. ISLAND SKY (B,L,D)

Tuesday, September 27: Didim
Explore Priene, known for its high-quality Hellenistic art and architecture, and stunning location overlooking the Meander River. Also stop at Miletus, an ancient Greek city and the birthplace of “the father of European urban planning,” Hippodamus. After lunch, wander the spectacular ruins of Didyma, an ancient Greek sanctuary renowned for its famed oracle. Didyma, which means “twin” in Greek, is also
home to the well-preserved temples dedicated to the twins Apollo and Artemis. ISLAND SKY (B,L,D)

Wednesday, September 28: Fethiye
From our berth at Fethiye travel southeast to discover the rich Lycian towns of Xanthos, built on a great cliff overlooking the river, and one of the most important religious centers of its time, Patara. Set amidst sand dunes by the beach, Patara is known as the birthplace of St. Nicholas, and where St. Paul stopped in A.D. 60. Return to the ship for lunch and an afternoon of cruising and lectures. ISLAND SKY (B,L,D)

Thursday, September 29: Antalya
Arrive in bustling Antalya and join one of two excursions: (1) A full-day tour to the ruins of ancient Perge, a settlement dating back to the Bronze Age, visited at least twice by St. Paul and his companion St. Barnabas; Aspendos, whose 2nd-century theater is one of the best-preserved in the Mediterranean; and the Antalya Archaeological Museum; (2) A short morning hike through the pines to wander the ancient mountaintop city of Termessos, another site mentioned in the Iliad, and legendarily difficult to defeat (Alexander the Great never could, though Bellerophon managed it by dropping boulders from Pegasus!), followed by a free afternoon in Antalya. ISLAND SKY (B,L,D)

Saturday, October 1: Limassol, Cyprus / Home
Disembark and transfer to the airport for flights home or continue on the optional Cyprus extension. (B)