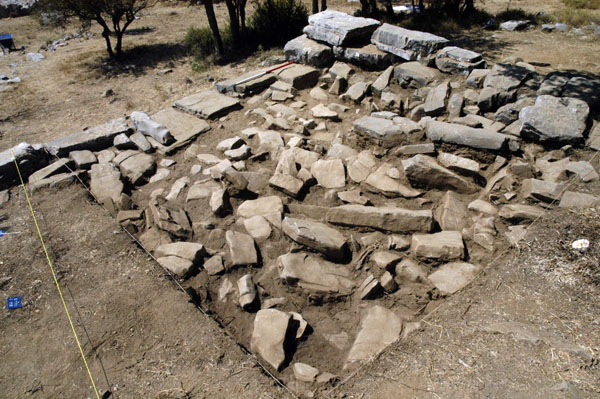 After a gap of 17 years, archaeological work at the site of Zominthos resumed in the summer of 2005. During the excavation season, which lasted four weeks, we unearthed rooms 14 and 17 of the Central Building.

Room 14, located at the north side of the Ceramics Workshop, had been investigated in 1988 and a window at its west wall was revealed. In 2005, the first layer we removed contained a few medium- and large-size schist slabs and a few sherds mainly from cups. At the central part of the room, we uncovered an oblong dispersal of carbonized wood, which may have been the remnants of a beam that fell from the roof. Across the north wall, we revealed a construction that may have been a bench at the same level as a bench we later found along the south wall of room 15. Also, another structure may have existed at the west wall. The finds were mainly bones and carbonized wood, as well as four vessels (two trays, one kalathos, and one handle-less conical cup).

We continued the excavation in the subjacent layer. At the area of the doorway, we recovered a large quantity of carbonized wood, which may indicate a fallen door panel. A big schist slab that was found across the doorway may constitute its threshold. We concluded that the floor was most probably made of earth, since we found no traces of stone slabs or pebbles. During the excavation of this layer, we discovered 78 complete or partly preserved vessels, including handle-less conical cups, a jug, and a lamp. Although rooms 13 and 14 were directly connected, the finds from room 14 do not seem to have been related to the production of pottery.

The excavation continued in the passageway that connects rooms 13, 14, and 15 (area 16). We found a total of 21 vessels, mainly handle-less conical cups. The rest of the finds were mostly carbonized wood, bones, two grinders, and a rock crystal. The majority of the vessels came from a layer 10 to 20 centimeters (4 to 8 inches) above the floor, which means that they fell from a higher level, probably shelves of the adjacent walls.

Simultaneously, the excavation continued in room 17. The upper layer consisted of a vast amount of slabs made of red and green schist. This large quantity is indicative of the existence of a first floor, which was destroyed by an earthquake, and its wall fell at the ground floor. The sherds collected from the fallen walls have been dated not only to the Minoan period, but to later periods as well. Also, many bones, some charcoal, two pieces of quartz crystal, a cylindrical processed stone, and some modern objects were uncovered.

The investigation continued at a lower level where we revealed small- and medium-size stones, mainly accumulated at the northeast and the south parts of the room. After we removed these stones, we opened a test trench at the east/central east part of the room. The finds included mainly charcoal and bones, two rock crystals, and some sherds of a pithos. The discovery of pithos sherds at a higher level than the ground supported the notion that a second floor existed as well.

The most important aspect of this excavation season was that a great number of vessels were found that date to later periods. It is probable that this part of the Central Building remained visible for a long period after the destruction by an earthquake. The latter is confirmed by the degree of preservation of the outer walls. As a result, it can be said that Zominthos was not a place of habitation during later periods, but a rest stop for pilgrims heading to the Idaean Cave.

We opened another trench at the south side of room 17, but only limited work was done. A great many stones and schist slabs were found in the surface layer. Also, a dense accumulation of small stones across the south wall seems to derive from the door that existed there. Bones, carbonized wood, many sherds, a badly preserved handle-less cup, and a rock crystal were the finds of the first two layers.

At the same time as the excavation, multidisciplinary research was conducted: topography, geography, and geophysics of the Central Building and the wider region; zooarchaeology of older and new finds; and archaeobotany for deposits excavated that year. The zooarchaeologists identified bones from many species, such as sheep, pigs, goats, fallow deer (Dama dama), hares, birds etc., while during flotation a lot of seeds were collected, including Lathyrus sativus, Vicia leguminosaea, Vicia ervilia, and a cereal.