In Room 15, we found many quartz crystals. It is probable that this room, among others, was used for processing this rar

e and valuable material, which in antiquity was believed to have magical properties. Quartz crystals and offerings made of this material have been discovered in the Idaean Cave and at some peak sanctuaries, indicating that they may have been used in various Minoan rituals.

In the Ceramics Workshop, we uncovered two mysterious “lekanes.” There are no parallels in Minoan archaeology. Although they resemble modern juice squeezers, we are not sure about their function. The spout was designed to pour liquids, so we think that they may have been used either in the process of producing ceramics or for squeezing juice from fruits and vegetables. Another idea is that they were used for food production, such as the congealing of milk in order to produce yogurt or cheese. In addition, both lekanes had a hole at the base, which may have facilitated their smooth firing–the hole was likely used to position the vessel on a shaft in order to spin it, like on a potter’s wheel.

The potter’s wheel from the Zominthos Ceramics Workshop is one of the biggest found to date, in either a palace or palacelike structure (or villa). It belongs to the well-known typology 3C (according to R.D.G. Evely). Similar wheels have been found at other sites, including Nerokourou, Knossos, Archanes, Tylissos, Gournia, and Zakros.

The Zominthos wheel has a diameter of 44 centimeters (17.3 inches) and a slightly projecting rim. On the back, it has seven grooves/ridges and a collar (13 centimeters, 5.1 inches) with oblique cuts. The wheel would have been attached to a vertical axis that revolved around the socket.

The potter’s wheel was used to shape round ceramic wares. The principle of the wheel was most likely developed in Mesopotamia. In ancient times, pots were created using coiling, a technique that involved squeezing, squashing, and smoothing successive layers of clay coils into a thin, even wall that swelled or tapered as it grew and formed a shape. To do this, the potter needed to turn the pot around slowly as he worked. Gradually, innumerable ways of using a platter or bowl to speed up the coiling were developed. Eventually, a small turntable was employed, with which a vessel could be turned around quickly and easily. However, it took a long time for free-running, steady turntables to come into use.

Among several pithoi that we have found in the Zominthos Central Building, there is a particularly interesting one that came to light in 2007. It took up a great area of the southeast and central part of room 15. It has a height of 1.15 meters (3.7 feet) and two rows of handles below the rim and at the lower part of its body. At the center of the room, and in contact with the pithos’ rims, two thin pieces of limestone came to light that do not resemble the stones fallen from the story above. This probably means that they were used to cover the pithos, which was most likely used for storing liquids or legumes and nuts.

We discovered this object in the northwest corner of room 15, near the pithos. Similar objects, which have been characterized as sauceboats, have been found at Akrotiri, Thira. However, we are yet not certain if the Zominthos find had the same use, since it is much larger and undecorated. Any suggestions? 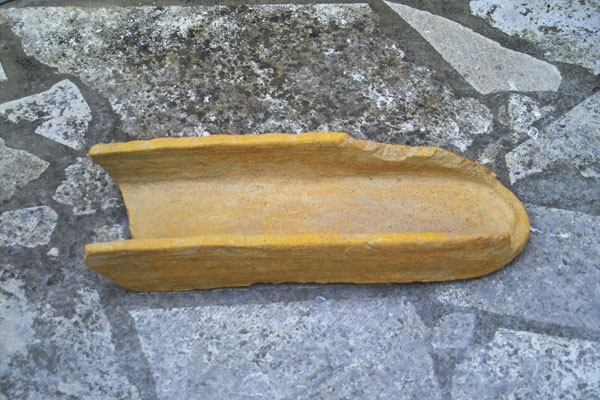 Beads Made of Bronze, Sard, and Agate

These beads, which we excavated in room 19, were most likely part of a necklace. They are special finds not only for Zominthos, but for the Neopalatial period in general. These kinds of artifacts usually come to light in cemeteries, which are quite rare during this era. 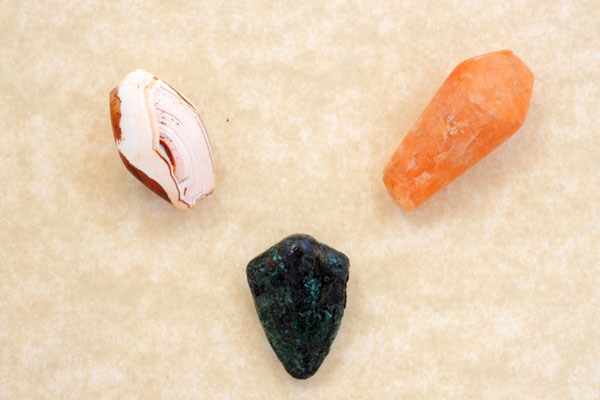 In the south wall of room 15, we revealed one niche, in which we uncovered three high-stemmed communion chalices. These cups were used as rhyta, since they have a hole at their base through which liquid offerings could be made. These finds may indicate the Central Building’s double use, as a place of worship and a crafts center, an interpretation that is reinforced by site’s location on the route to the Idaean Cave.

Knife Blade and a Vessel’s Base with Fingerprints

We found this knife blade in the Ceramics Workshop, near the potter’s wheel and under a very strange base of a vessel that has numerous fingerprints. Although it is not definite that the blade was used in the production of pottery, it is certain that it was used like a modern knife, probably for the preparation of food, since we unearthed a lot of animal bones in the same room. On the other hand, the base of the vessel has no parallels. The fingerprints may have formed a rough surface to be used as a grater, probably for the production of pottery. Any suggestions are more than welcome!

We uncovered this rhyton, shaped like a pig, in the niche of room 11. It seems that there are no parallels of this type and, along with the other three rhyta in room 15, it may reinforce the interpretation of the Central Building’s double use as a place of worship and a crafts center.

On the floors and walls of the Central Building, we found great quantities of plaster. Many of them have traces of red and blue color, as well as traces of the strings that were used to shape the outlines of frescoes. Their quality is unprecedented for such a building, which supports the notion that Zominthos Central Building had palatial features and functions.

In room 15, we unearthed several pieces of pyroluzit (manganese oxide), which has a semi-metallic shine and is mainly found at Lavrio (Attica) and on the island of Melos. When processed appropriately, it can be used to make colors and produce porcelain. 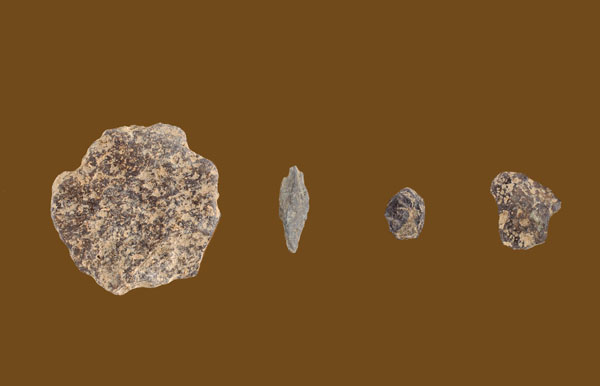 The archaeological data in Minoan archaeology, with the exception of Akrotiri and Archanes, rarely present such well-preserved floors from each story. An excellent example at Zominthos comes from room 15, where part of the floor was lying in the upper layers and especially above the pithos found at the northeast part of the room, giving a definitive answer about the original appearance of the floor. 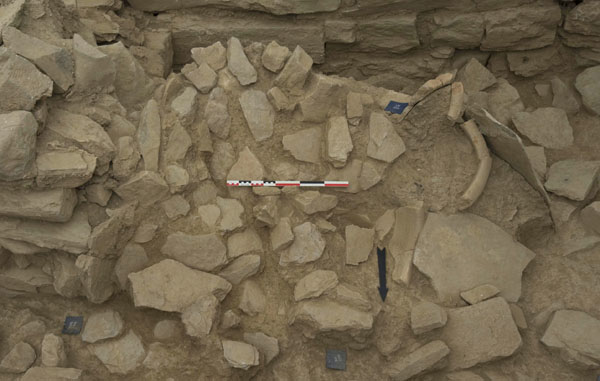