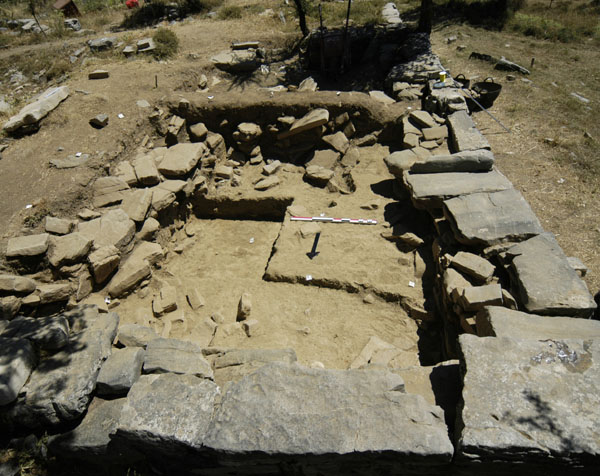 During the 2006 season, we explored five areas in the Central Building. Room 7 was relatively small and connected with the neighboring room via two openings—at its west wall and southeast corner. This room had already been investigated in 1983 when a thick layer of plaster, the biggest single piece of plaster known from the Minoan period to date, was uncovered. However, it remains unclear as to whether the plaster came from a wall or the floor, although the latter suggestion seems to be the most viable. Later on, we cleared the fill of the northwest part of room 6, and found a few small limestone and schist slabs, along with some sherds and numerous fragments of plaster, one of which has traces of black color. After the plaster was conserved, we detected traces of red and blue color, as well as impressions of thin strings, which is suggestive of the technique the Minoans are known to have used to create straight lines in a painted scene.
[imagebrowser=9] Room 17 was once connected, via a narrow opening, with an unnumbered room to the south, along the west facade of the building. There may be a chance that a second opening existed on the east wall. In general, the walls of this room have the same characteristics as those of the rest of the Central Building, including pieces of limestone of various shapes and schist slabs. The biggest piece of limestone, at the lower course of the north wall, is 1.5 meters (almost 5 feet) long and 0.4 meters (1.3 feet) thick. At the north-central part of room 17, the four upper layers were full of stones of various shapes, which most likely came from the fallen walls of neighboring structures and the first floor. This is the fill that gradually covered the building after its destruction by an earthquake.

The greatest accumulation of limestone existed along the north wall; however, it was not possible to identify the floor of the story. The various finds that were revealed 20 to 30 centimeters (7 to 11 inches) above the level of the floor indicates that they fell from upper-level shelves or the floor of the upper story. Fifty-seven vessels, as well as many sherds among limestone and schist slabs, were found at the north-central part of room 17, and almost at the level of the floor. These vessels mainly consisted of handle-less conical cups, cooking pots, and dishes. A large quantity of carbonized wood and animal bones was also found, as well as a fragment of a lead object. At the south of this accumulation, and at a lower level, there was a thin layer of burnt soil with vessels in between schist slabs and white stones. There were 17 complete or partly preserved pots, most of which were handle-less conical cups. There were also dishes, trays, and cooking pots. In addition, a large amount of carbonized wood, animal bones, and some objects made of stone were collected. At the middle of the west wall, we found many animal bones, a lamp, and two handle-less cups. From various points of this fill at the north-central part of room 17, a total of 26 vessels came to light, some of them decorated with characteristic motifs. Other finds included a corroded piece of silver, an unidentified bronze object, and a stone tool, as well as burnt wood and animal bones. The great amount of bones, the cooking pot, and a number of burnt stones may indicate that there was a hearth. One of the most interesting discoveries in room 17 is a structure along the west wall that resembles to a great extent a low bench or a workbench.
[imagebrowser=10] To sum up, room 17 produced a total of 118 vessels and many sherds of well-known types. The vast majority of them were handle-less conical cups. Three pithoi came from an upper floor since they were found at a higher level. The combination of the various finds most probably indicates that the main activity that was taking place in the interior was related to food preparation and consumption.
Room 15 is located to the south of rooms 13 and 14. The whole complex is a later addition to the Central Building. The surface layer produced few finds. We found three handle-less cups, a sherd from a pithos, and some other sherds, as well as burnt wood and bones. In the next layer, there were a lot of small stones, as well as red and green schist slabs and carbonized wood. It is probable that these stones came from the floor or other structures, such as shelves. The existence of an upper story is confirmed by the fact that many vessels, mainly handle-less cups, were found in this layer (two meters [6.5 feet] above the estimated floor level). Also, it is worth mentioning the discovery of two large vessels (a pithoid jar and an amphora with decoration) and a stone “bird’s nest” bowl. In the south wall of room 10, we uncovered a handle-less cup and a mandible. From various areas, a lot of sherds, some handle-less cups, white plaster, burnt wood, and animal bones were revealed. Lastly, part of a clay tube came to light. It seems that a window existed on the west wall, which was confirmed thanks to a gap in the masonry.
[imagebrowser=11] The narrow passageway (area 16) that connects rooms 13, 14, and 15 was also unearthed. Part of this had been excavated in the late ’80s. The layers included white plaster and burnt wood, while on the east wall of the passageway, a small niche was uncovered with a complete beaked jug. In the same level, we found an accumulation of various types of vessels, including three incense burners, a miniature handle-less conical cup, and four unidentified pots.
[imagebrowser=12] Room 8 is alternatively called “the room with the window at the north facade of the Central Building.” The superficial layers were investigated during the first seasons in the 1980s. We started excavating the subjacent layers and discovered a large amount of stones and only a few sherds. Among the finds, there were many pieces of burnt wood, some bones, and numerous small pieces of white plaster, some of which had traces of red color. 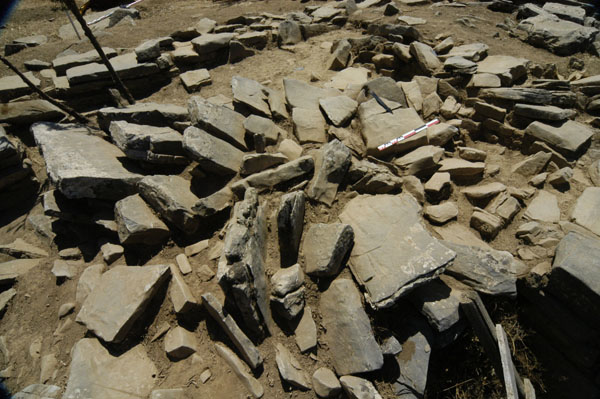 Fallen stones from the east wall of room 8

Based on the various finds that were revealed during the 2006 season, it can be said that parts of the Central Building were decorated with frescoes. Also, the architectural materials and the various finds of the upper story can be sufficiently detected and distinguished from the finds that belong to the ground floor. In all the investigated areas, there is a homogenous picture: many handle-less cups all around the floor, large quantities of carbonized wood, and many animal bones. This great accumulation of burnt wood indicates that at the moment of the earthquake some oil lamps were in use, which means that the building was inhabited.
Apart from sieving, flotation, sampling of organic materials, and conservation of various objects, small-scale surveys were simultaneously undertaken in order to aggregate the place names and identify any potential sites in the wider area of Zominthos.
Interactive Dig: Zominthos, Crete