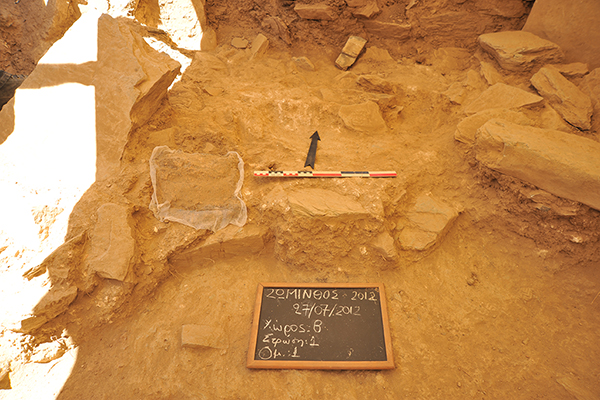 The excavation goes on at the southeast corner of the room where the slabs have been removed. Several pieces of plaster were removed. Many of them bear red, black, οrange and blue colors (fig.1). The pithos rim that was found last week was also removed (fig.2). As well, the slab that might have been part of a staircase was further unearthed (fig.3).

During the fourth week, we continued moving in depth, working on the removal of the 6th and the 7th layer, almost 1.5m from the surface of the trench (fig. 1). Because of the large quantity of the fallen plasters, which are rather dense at the southwestern and the central parts of the room, we move rather slowly. These are gradually removed after they have been carefully cleaned and mounted by specialized conservators. It is worth mentioning that many of the pieces bear colors, such as red, orange and black. In some cases, band of different colors alternate with each other (fig. 2-3).

With the removal of the 7th layer we also revealed two very interesting architectural elements. the first one is the window sill at the north wall. Its surface however, is not very well preserved especially at its southeast part (fig. 4). The other architectural element is a rectangular stone structure which encloses the northeast corner of the room (fig. 5).

Also, we made extensive mounting works at the west wall of the room, which present a strong inclination to the west, because of the seismic activity that destroyed the building. During this work, we also managed to recognize and clean an opening which was built to facilitate the access to the room from Corridor 10. This opening was blocked with small and irregular stones at a later phase of use of those areas (fig. 6)

During the 4th week of excavation we continued investigating Corridor 10 in depth (fig. 1). The picture we have is quite similar to the overlying layers. In general, we could say that large quantities of carbonised wood dominate the trench, especially at its north and central part. It is also worth mentioning that some of the carbons revealed are cylindrical, most of which quite thin, 1-2cm., and also some larger, indicating that they belong either to thin straws and/or wooden beams used to make/support the second storey or the roof. We should also mention two important aspects: the clay soil revealed at the south side of the trench, might belong either to a clay feature, or most probably was used to seal the storey or/and the roof. Also, at the area where we unearthed the large quantities of carbon we found some traces of plaster indicating that it comes from the walls of the upper storey and/or the junctions of the schist slabs used for the floor of the storey.

Regarding the artifacts, we revealed large quantities of small sherds and no intact vessels. This is because of the large stones that have fallen from the superstructure of the building, crashing the objects underneath. It is worth however mentioning that at the south part of the trench we started revealing the base of an inverted pithos (fig. 2), which seems similar to the pithoi that have been found in the past in other areas of Zominthos Central Building.

In the fourth week, we continued investigating Area 26, for which we realized that is divided into two areas: 26 and the newly numbered 53. Area 53 is an oblong Room, probably a corridor, that links the Area 19/28 with the upper floor through the staircase in Area 20 and the storage rooms 11 and 12. From both those areas, 26 and 53, we continued removing large limestone slabs, some of which exceeded 1m. in length most probably belonging to the upper storey and wall of the neighboring buildings (fig. 1, 2).

Lastly, we collected several sherds, some of which are burnt and a few pieces of carbonised wood.

See video: General View of the Dig in Area 26

During the fourth week of excavation we removed three out of four areas of clay, (fig. 1), black  and white soil (ashy – indicating the level of fire in this area), which were revealed in 2011 at the northwest and the southeast part of Area 19. While removing the first area at the northwest part, we revealed a new wall (Wall I), with a direction East-West, which exist at a lower level in comparison to Areas 19, 28 and 49. On its surface we identified traces of ash, as well as a small grinder at its south side. We will continue investigating the lower level of Wall I (fig. 1), as well as the area at the southeast corner of Area 19 (fig. 2).

In addition, we continued removing the deposit  at the southeast corner of Area 19, which is a stone-mound fallen from the upper storey (fig. 2). At the upper levels of the deposit, we found several intact and fragmented conical cups, part of a juglet, clay discs (fig. 3, 5) and part of a barrel-shaped jar. Also, we found part of a horn (fig. 4), probably from a wild goat, as well as a big tooth from a boar. At the lower levels of the deposit we identified the scaffolding of the East Wall.

At the east past of Area 28, we completely unearthed the paved floor (fig. 6), consisting of large and medium limestone and schist slabs, on which exist the foundations of WallΓ, WallB and the East Wall. At the southeast corner of Area 28, in between the two openings, on the paved floor, we unearthed a clay cover of a timber frame made of clay soil and sand. Also, at the northeastern side of the trench, on the paved floor, we found the bigger part of a clay disc which bears traces of fire and clay soil all around it. At the lower layer of the floor we also collected a few, mainly intact conical cups as well as a small grinder.

At the west part of Area 28, we continued the removal of the deposit at the ex-part a (New Area 54) (fig. 7), without revealing a paved floor or the foundation of its two walls Z’ and E. A limestone slab of a quite significant size , on which Wall B is founded, is probably related to the opening at the southwest corner of Area 54 (lintel?). At the south side of Area 54, we found several fallen cups and part of big coarse pottery and a grinder.

Lastly, we started the excavation at the west part of Area 29. After removing the layer of fire consisting of black and reddish soil, we revealed the paved floor (fig. 8) which is related to the big lintel that was revealed at the northwest part of Area 49. The large quantities of burnt wood, which were found in between and on the slabs of the floor indicate the level of fire