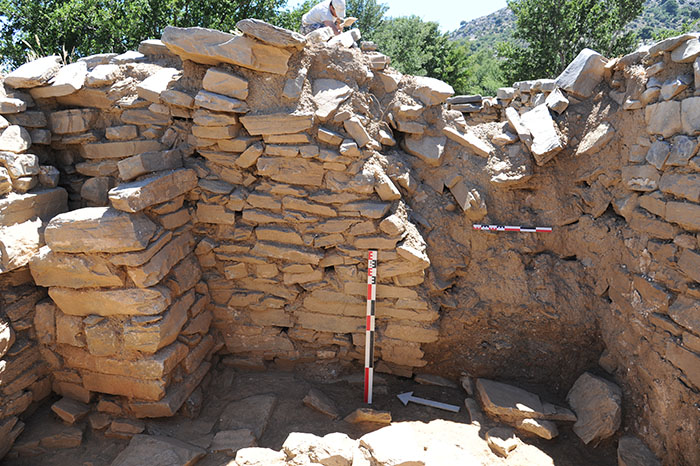 During the first week of this season a Layer was removed from the whole surface of Room 6 (fig.1). Very few pottery sherds were collected and several plaster fragments, some of which with traces of color. The removal of this Layer revealed that the northern wall of the Room is structurally connected with the northern wall of the neighboring Corridor 21 (fig.2).

The excavation of Corridor 21 begun with the removal of a pile of stones covering the western part which were detected but not removed during last year’s investigation. Inside the Layer (fig.3) a small number of conical cups was unearthed, a fragment from the lip of a pithos some stone pieces that may have been processed, bones and plaster fragments of various sizes, some of which bear traces of color.

The first task for this year in Room 22 was to clear its southwest corner of the stones that were covering it in order to establish if the southern wall of Room 22 and the southern wall of Corridor 21 are connected, as in the case of Room 6. Furthermore, the western part of Room 22 was brought to the same level as the rest of Room 22 (fig.4). A small number of pottery sherds were collected, a few bones and some plaster fragments saving their surface.

Wall between Rooms 8 and 9

Most of the fragments of last year from the rooms 8 and 9 bear traces of monochrome decoration but there are several that were decorated with zones of different colors and thickness, even some with pictorial themes, like spiral or floral motifs (fig.1).

In 2013’s investigation the entrance between Rooms 8 and 9 was left unexcavated (fig.2). This year, during the first week of the survey the debris of the entrance was cleared and its stone doorstep was unveiled (fig.3). The excavation of the entrance produced some interesting finds, such as more plaster fragments, some with traces of orange, red or black paint, the upper part of a big amphora fallen from the upper floor (fig.4) and two conical cups that were found on the doorstep.

Corridor 10 is the main corridor which, situated along the north-south axis, divides the East from the West Wing of the Central Building of Zominthos. The excavation here has reached the floor level in depth at a length of 17.5 m. so far, but it is assumed that its total length will be around 25 m.

During the current season 3 new openings were discovered. The 2 of them are considered entrances while the architectural function of the third, narrow and long, opening remains to be defined (fig.2).

The large size of the stones that have fallen into the Corridor from upper floors and from neighboring walls, underlines the glorious appearance that the building would originally have (fig.1, 3).

Corridor 18, the southern part of which had begun to be excavated in the 2013 season (fig.1) connects Room 49 with the area situated on the west of Rooms 13, 14 and 15. The investigation of this area continues with difficulty due to a large tree trunk located on the west of the window of Room 14. During the excavation of the first two Layers (fig.2) large stones appeared, some of which were removed.

The excavation of the northwest corner of Room 19 (light well) continued. The last part of the pile of fallen stones and the big limestone slab on top of them (see the field notes of the 2013 season) were removed in order to uncover the paved floor (fig.1). Between the northwest pillar and the northern wall of Room 19 an opening appeared (fig.2) with floor slabs leading to the triangular construction (fig.3) revealed in 2011 and 2012.

In Room 28 (fig.4) the excavation continued at the western part, on the south of the older wall that was discovered there during the previous period, located under the LMIA floor. Large slabs were found that probably belong to the floor of this older architectural phase. Furthermore, on the west of this wall the investigation continued at the area of the drain that was unveiled in 2013 on the western part of Rooms 19 and 28 and is covered with stone slabs put in line. Finally, the excavation of Room 54 continued (fig.5). The revealed floor was paved with clay, lepidha-earth and shattered pottery sherds on an underlay of shattered gravel.

In these two rooms at the southern part of the Central Building (fig.1), which had been partly excavated during the last period, the excavation proceeded to the lower strata. In both rooms a big amount of pottery was found, mostly conical cups (fig.2) but also fragments of medium and large size vessels, bones and small fragments of carbon and plaster. In Room 42, the northern entrance (fig.3) was revealed. The most interesting  find comes from Room 41:  a bronze votive knife (fig.4).

The excavation of Room 56 started in the last season and produced mainly conical cups and several bone fragments.

The investigation of 2014 began from Room 56a. The surface layer and the greater part of the first Layer were removed and the earth between the stones on the walls was cleared. A large amount of pottery was collected, consisting mostly of parts of conical cups (fig.1). Stones of various sizes were carried off and in the southeast corner more pottery sherds were unearthed (fig.2)

The research in Room 56b was limited to a small part of the northeast corner and no special finds came to light.