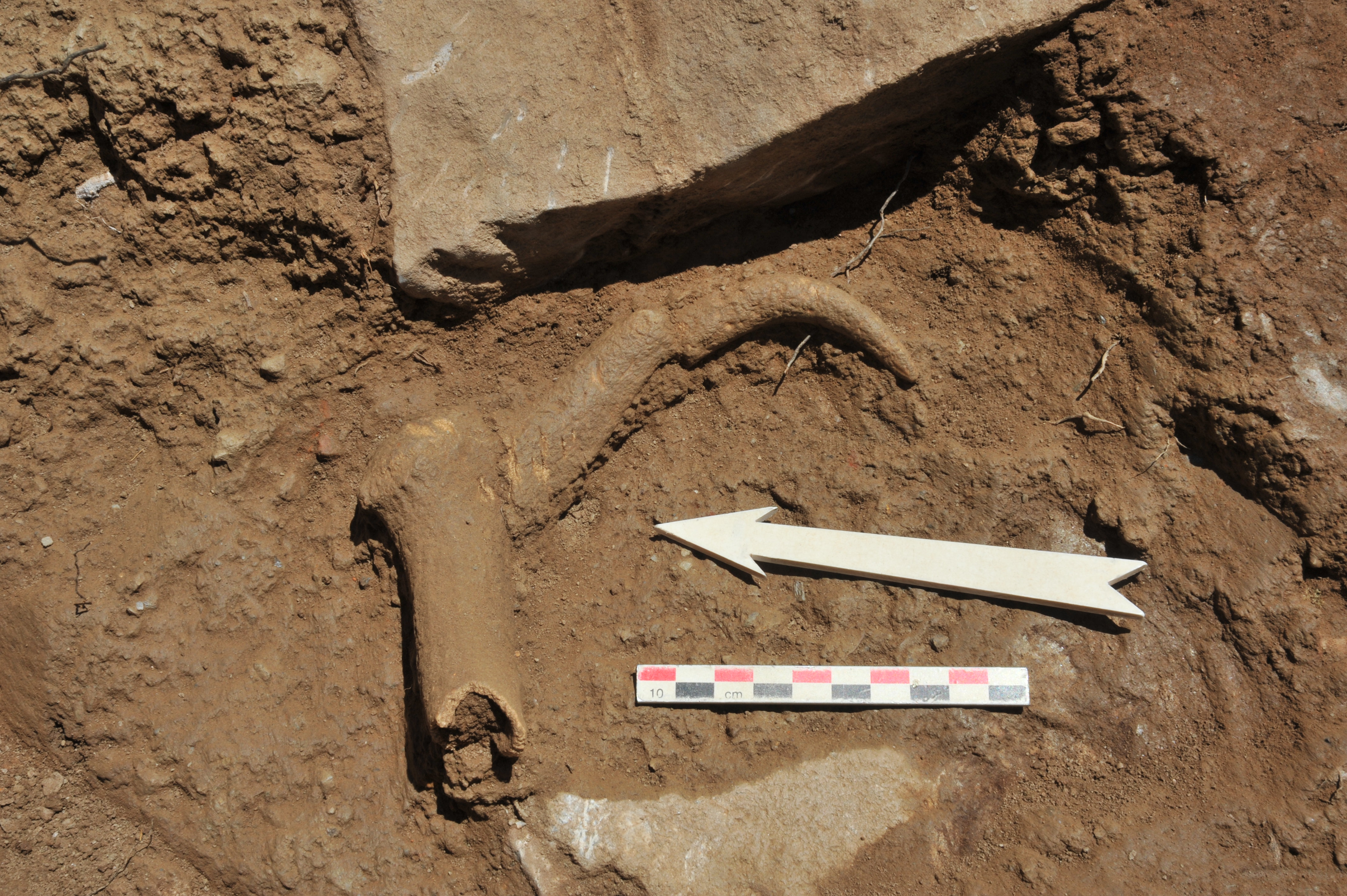 The excavation of the oblong Room 24 completed. The whole surface of the paved floor was uncovered (fig.1). Several building phases can be distinguished. Wall ΙΙΙ, at the western part of the Room, was demolished because it was a later addition to the architecture of the area. A bench covered with white plaster was found underneath, flat by the south side of the northern wall and the west side of Wall IV (fig.2). Further to the East, another possible part of a bench was located, touching the east side of Wall IV and the south side of the northern wall. Two openings were located that may had been entrances towards neighboring Rooms. The first one interrupts the eastern edge of the southern wall and leads to Room 30 (fig.3). The other is a gap found on the eastern wall between two large cornerstones that possibly was a second entrance (fig.4).

During the excavation some fine and coarse pottery sherds were collected, as well as some animal bones and small pieces of carbon.

Room 32 is excavated for the first time. This Room was destroyed by looters during the 1960s and its south and east boundaries are not clear. Also, a big tree that has grown in the middle of the area complicates further the excavation. The surfaces layer was removed and very few pottery sherds were collected. At the northern part small stones were left in situ (fig.1).

At Room 33 four more layers were removed revealing some arranged stones, possibly part of benches or of a later architectural addition (fig.1).
At the north-west part of the Room a religious deposit came to light. Dozens of pots were collected, mostly conical cups, and also many bones and pieces of carbon. Parts of jugs, some intact cups and part of a kalathos rhyton (fig.2) were found among the pottery.

The south part of Corridor 36 begun this week (fig.1). In 2015 the northern part of the paved floor of the Corridor had came to light. This week four homogenous layers were removed containing a large number of particularly big-sized slabs, probably fallen from the eastern wall. The eastern wall continues to the South while the structure of the western wall is not yet fully clear. A small opening (niche) was found between Corridor 36 and Room 37. Several animal bones were collected, as well as typical pottery.

The excavation of Room 37 continued with the removal of two more layers containing the same type of soil (fig.1). The clay structure or floor from the upper storey that was found last year and continued to be excavated this year, doesn’t extend deeper. The southern border of the Room has not yet been defined. The big stone of the NE part of the room goes deeper (fig.2). Some schist slabs found at the south-east section of the Room may belong to the upper storey floor. The excavation proceeded to the South-East and at the opening leading to Room 39. Several groups of clay pots were collected containing clusters of animal bones, some conical cups, part of the rim from a large pithos, a big piece of burned wood, a horn, probably from a deer (fig.3), a clay loom weight, a whetstone and typical pottery.

At Room 38 three layers were removed (fig.1). The inner surfaces of the Room’s walls gradually come to light and it becomes clear that the entrance was only from the North, namely from Rooms 54 and 58. A fill of randomly fallen stones inside dark, loose soil with very few finds covers the whole area. The only finds were a conical cup, two whetstones, a group of five small pieces of rock crystal and an almond-shaped bead from a semi-precious stone (fig.2).

In room 47 two openings were revealed, one on the eastern side and another on the western, leading to the Rooms 37 and 39 and also the structural elements that had fallen from an upper storey, such as a threshold (fig.3).

An intermediate wall was found inside the Room, near the modern construction of shepherds (fig.4).

The finds, such as a dagger with an almost intact blade (fig.1,2) connecting the blade with the handle and the rich variety of pottery collected during the excavation indicate the importance of the Room.

Four more layers were removed at Room 59 (fig.1) containing fallen stones, mostly at the southern part of the Room, and schists at the southern and northern part. The northern wall of the Room was uncovered. A large amount of courseware and fineware pottery was collected, together with some animal bones and an almost intact miniature jug.

At Room 60 three layers were removed (fig.2). During the dig, a large slab was located inside the entrance of the Room, which belonged to the threshold. Furthermore, three more slabs were found, probably from the floor of an upper storey, a lot of pottery, a small quantity of carbon and some animal bones. Also, an almost intact fruit stand was collected (fig.3) and a whetstone.