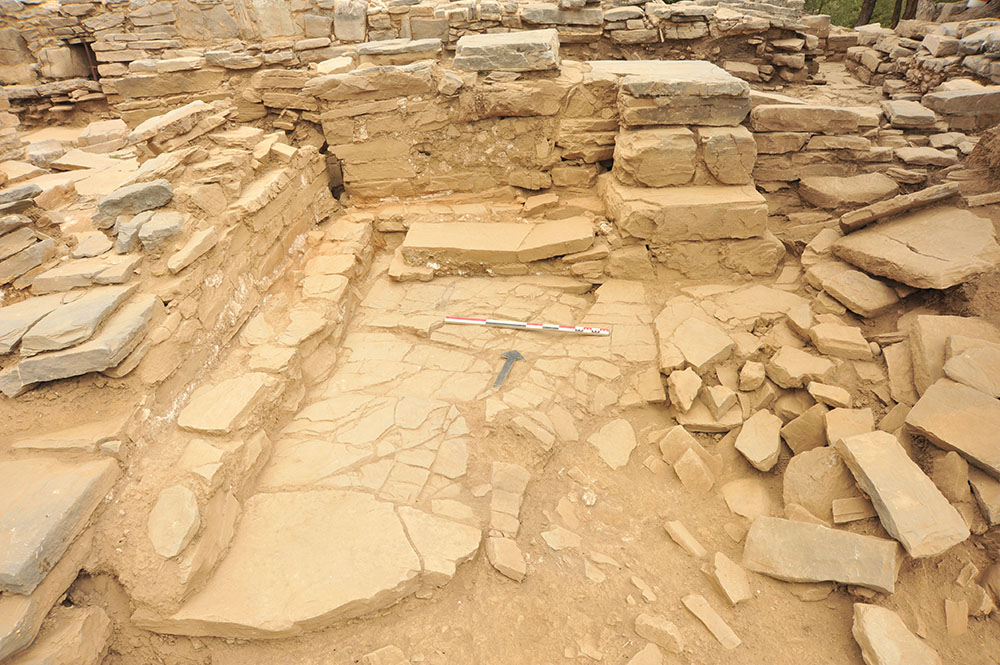 The excavation of Room 33 is completed revealing a clearly disturbed paved floor (fig.1). Stone structure used as desk, was discovered alongside the north and west wall under red soil. South to the north desk is found a big stone plaque that could have been used as an altar, but its use is not clear yet.

The excavation of deposit at the north west side of the room is completed with a total more than 150 clay vases, fragmentary and intact. Most interesting artifact is a clay cooking pot (fig.2). A huge amount of pottery fragments is collected, suggesting a much higher number of clay pots. Many animal bone fragments and some chips of charcoal were also recovered.

The excavation in Corridor 36 (fig.1) continued with the removal of two more layers containing clay soil and particularly big-sized slabs (fig.2), fallen from the east wall. The paved floor was revealed at the northern part of the Corridor. Among the big slabs was found a big cooking pot and several animal bones (fig.3). Also, was cleaned entirely, the small niche in the west wall (fig.4), where big vases and a part of stirrup-jar. Several conical cups, small pieces of burnt wood, small groups of ceramic pots and a horn were collected.

During the second week were removed two more layers containing the same type of soil (fig.1). The big stone of the SE part of the room and stones below it seem that is a part of a fallen wall on a slab that belongs probably to the paved floor. Next to it was found a bronze object with a loop (fig.2). At the centre of the room was revealed the bigger part of a stone base from a pillar (fig.3) and at the north part of the room, a bench (fig.4) which is not yet uncovered entirely. The excavation proceeded to the South-East and South-West of the room (fig.5) where some big stones seem to belong to a South wall. A small piece of rock crystal, several conical cups, jar fragments, some small groups of ceramic pots, pieces of burned wood and a horn were collected.

During the 3rd week of excavation in Room 38, the removal of Layer 5 and of part of Layer 6 was completed (Fig. 1). The fill of the room continued to be relatively homogeneous, consisting mainly of great quantities of fallen stones. Along the west wall of the room a kind of bench is gradually being revealed (Fig. 1). As is evident from the adjacent rooms to the north already excavated, the excavation of Room 38 is approaching the floor level. It is thus no surprise that the number of the finds yielded by Layers 5 and 6 has increased. They came to light mainly along the walls of the room. The most important of them were a number of small pottery vessels, mainly conical cups, parts of a large storage jar (pithos) next to the west wall, three grinding stones, a stone spindle whorl (Fig. 2), as well as two artifacts made of bronze, namely a knife blade (Fig. 3) and a pin (Fig. 4).

We continued the excavation of Room 40 whose investigation started last year. This specific Room is located in the south part of the west wing of the Central Building and east of the Corridor 10 with which communicates through a door.

Three layers were removed revealing medium-sized and big-sized stones fallen from the walls of the Room (fig.1). It was also revealed a big mass of compact clay-soil in the north-west corner of the Room which continues in depth. Several pottery sherds, animal bones, peaces of carbon and also an iron-stone were collected.

During the third week of excavation in the Room 47, three layers of earth were removed.

This week came to light important elements for its architectural design and finds which show its function.

A big mortar was fixed probably on the ground found with two gridding stones in the nearby area. (fig.1, 4)
The wall which appeared last week continued. This wall is dividing in two parts the Room 47. An opening shows that the two parts communicated. (fig3).

An “egg cup” found in the room proves an older use of this room (Old Palace Period). (fig.2).

The excavation of room 59 was finished (fig.1) with the removal of four layers containing small falling stones at the centre and the northern part of the room and schists close to the four walls of the room. At the centre of the room, stones in a row, probably form a wall, with a threshold separated in two the room (fig.2). At the north eastern opening of the room were found stones probably from the paved floor. A lot of pottery was found, mostly courseware, with animal bones, pieces of a pithos and stones with coloring matter.

Τhe dig of room 60 was finished with the removal of three more layers. Slabs came to light belonging to the floor at the east part of the room (fig.3). After the removal of falling stones plaques of schist were found especially in the eastern part of the room. Furthmore, it was found a large amount of fineware and courseware pottery, animal bones, a group of pottery vessels (fig.4) and small quantity of carbon. Finally, east of room 60 in room 60a (fig.5) appeared the slabs of the floor.